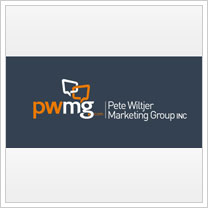 Last week for his 40th birthday, Pete Wiltjer received the gift that keeps on giving--identity theft.

A new business name meant new business plastic, but someone managed to get hold of the old card information (he shredded the cards) and rack up some fraudulent charges in California and Canada. Three calls to the bank later, and still only one of the three disputed charges has been resolved. "I can see why they're being nationalized," Wiltjer says of his bank. We won't name names, but let's just say his bank is aptly named. What Wiltjer didn't get in terms of closure with his bank, he made up for with his new logo. His social media efforts have paid off in terms of increased traffic to his blog, where he's not only gotten support from total strangers, he's also had the chance to elaborate on his message and the thinking that went into the logo.

He also put to rest his dispute with one of the designers who participated in his crowdsourcing project, and who ended up apologizing for his negative comments after Wiltjer went out of his way to address them nicely.

"No one likes to be attacked," he says. "But if you size it up for what it is--that people are blowing off steam--and give them a polite response, it's amazing how civil people can be."

While he's waiting for his new website to be designed, Wiltjer's been hard at work tweaking his copy to make it less sales-oriented and more abstract to reflect a broader message about how effective public relations can help prospective clients gain strategic knowledge of their market and competition. In short, he's hoping it'll reflect his vision of PR as both an art and a science.

Wiltjer hopes to have the visual components of his new website about 90 percent finished by next week. He'll give us a sneak peek then.

4 Ways to Revolutionize Your Customer Experience in The Metaverse