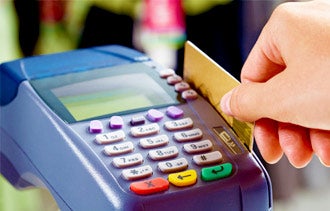 Amid a relentless battle between the nation's biggest banks and the retail industry, a Federal Reserve report shows merchant processing fees for debit cards have been cut nearly in half, thanks to federal legislation that took effect last October. But some small retailers are not seeing the benefit.

Retailers have to pay a fee, often referred to as a "swipe fee," when a customer pays with plastic. As part of the sweeping Dodd-Frank Wall Street reform bill signed into law in 2010, card giants, like Visa and MasterCard, are more limited on what they can charge. For small retailers, these swipe fees can really add up and cut into an owner's already razor-thin profit margins.

In the last three months of 2011, the average debit card swipe fee for large banks affected by the Fed's rules plunged to 24 cents, down from an average 43 cents prior to the reforms. Banks with $10 billion or less in total assets (such as community banks) are exempt from the cap so they can still charge more, with the average fee remaining around 43 cents, the Fed reported this week.

The idea behind the exemption was to prevent community banks from taking too severe a hit to their debit-card revenue stream. But the Independent Community Bankers of America, an industry group representing small banks, says the exemption really won't protect them very much because community banks will find it harder to compete with the bigger banks that now offer lower fees.

In June of 2011, the Federal Reserve set the cap at 21 cents per transaction, plus 0.05 percent of the value of the purchase and a 1-cent fraud-prevention fee for the big banks. While better than the average 40 cents retailers had been paying, the fee is still significantly higher than the 12-cent cap retailers hoped for.

"It is good for most merchants, but there are a couple of subcategories of merchants that are still having difficulty," says National Retail Federation Senior Vice President and General Counsel Mallory Duncan.

For retailers selling mostly small-ticket items, the cost of a debit-card swipe has in some cases gone up. For example, on a 99-cent purchase, a merchant that previously paid 8 cents to process that transaction, now has to pay 22 or 23 cents, according to Duncan. To be sure, many small retailers have worked around that by establishing a minimum purchase requirement for customers choosing to pay with plastic. And last fall, the NRF filed a suit against the Federal Reserve in an effort to get the central bank to amend its rule. The case is still pending.

Meanwhile, Mallory says that some retailers are unwittingly being taken to the cleaners by debit-card fees charged through their third-party processing company, known as a merchant account provider or acquirer. These companies will set up the terminals and process the transactions for retailers, in exchange for a percentage of each transaction. In some cases, Mallory says those third-party processors are not passing along all of the savings from the lower bank fees to the merchants in the wake of the reform. Mallory says one way to make sure you're charged the correct processing fee is to shop around.

At least one processing company, Heartland Payment Systems, is turning the problem into an opportunity by openly advertising on its website a tracker of the number of "Durbin Dollars" it has saved its clients, named after the Senator who proposed the amendment to the legislation.