New Leadership in the SBA 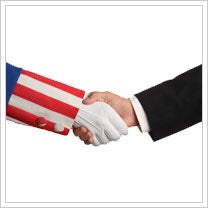 For a while now, we've been in limbo as we have waited with bated breath to see who would officially take the helm of the Small Business Administration. In August, we heard that President George W. Bush had named Sandy Baruah as the acting administrator of the SBA but never saw the day that he officially claimed the position as "administrator."

On Friday, President-elect Barack Obama shed some light on the future of the SBA with his nomination of Karen Gordon Mills as the new Administrator. Assuming that the Senate approves the nomination, Mills will take office in early 2009.

So who is Mills? A venture capital expert, she is founding partner of Solera Capital, a New York City-based VC firm, and president of MMP Group. She has also been part of Obama's SBA transition team.

"I applaud, and welcome, President-Elect Obama's selection of Karen Gordon
Mills to serve as the next administrator of the SBA. Karen Mills has been a friend and professional partner over the years in both my roles as the assistant secretary of Commerce and the head of the SBA. She is ideally suited to lead the agency. Mills' background is a combination of management, venture capital, and public policy, three elements key to leading the agency successfully. In addition, Mills has a record of bipartisanship, which is important to SBA and the small-business community the agency serves."

Meanwhile, Senator Mary Landrieu, D-La., the incoming chair of the Senate Small Business and Entrepreneurship Committee released her own statement:

"Karen Mills brings impressive private sector experience to the SBA, an agency the current administration greatly underutilized. Now more than ever, SBA needs a strong leader with renewed purpose. American small businesses deserve a true champion, and Karen Mills, an entrepreneur who has also been a key advisor to Maine Governor Baldacci, brings the right mix of credentials to this important position. Senator Snowe and I look forward to working with her to strengthen the SBA into an agency that can be a true lifeline for small businesses and that can spur job creation in this challenging economic time."

Hopefully, the nomination means that the SBA's transition period is drawing to a close. Maybe we can start moving forward and looking to the future.