The State of Entrepreneurship 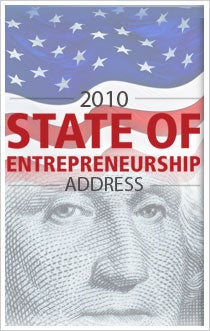 Carl J. Schramm, president of the Kauffman Foundation, opened up the event "The State of Entrepreneurship"at the National Press Club by stating that, "We are meeting at a grave moment." It was a sobering opening statement; however, the rest of his speech primarily focused on the history of job creation by entrepreneurs and, more important, the history of job creation by entrepreneurs in a down economy. In fact, both Carl Schramm and Secretary of the Department of Commerce Gary Locke referred to the fact that half of all Fortune 500 firms formed during recessions or bear markets.

It wasn't all good news. In a poll released today by the Kauffman Foundation, some bad news led the way (here):


On the other hand, the poll also had good news:

While the bad news is definitively bad, the idea that entrepreneurs are still willing to start new businesses and the fact that current business leaders mainly started during times just like this left the room feeling positive about the state of entrepreneurship.

Schramm and Locke agreed on America's need for entrepreneurs andthe importance of focusing on helping America's small-business owners. To aidthat focus, the Kauffman Foundation discussed a couple of policy reforms that it supports.

Favoring those who plan to start a business.

Overall, it was a good event. Entrepreneurship is alive and well.

There was one nagging issue that nobody addressed during the event. The fact that barely two blocks away, at the White House, talks are taking place to pass a health-care bill that will add more regulations and pile more financial burden upon the very people that all of the speakers referred to as creating nearly all net new jobs in the past five years--entrepreneurs--while the economy continues to decline.

Posted by Charles Sauer, founder and president of the Market Institute, which is focused on getting information to the so-called voiceless and giving them a voice on Capitol Hill.