By Jason Fell
September 13, 2012
Opinions expressed by Entrepreneur contributors are their own. 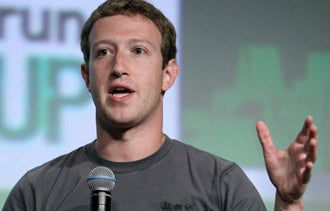 Sometimes the road to the top is full of bumps and potholes. No one knows this better than Facebook co-founder Mark Zuckerberg.

In his first public appearance since the company's IPO this summer, Zuckerberg was interviewed this week by Michael Arrington at TechCrunch's Disrupt conference in San Francisco. Among a number of topics, the outspoken tech leader touched on the company's acquisition of Instagram, why it's not developing a Facebook phone and how he still codes but "everything I do breaks."

Zuckerberg also spoke at length about some of Facebook's successes and failures over the years. Here's a look at three of his points that entrepreneurs should keep in mind when starting up their own ventures:

1. Be where your customers are.
When Facebook launched in 2004, it was designed for traditional computers. In the more than eight years since, the mobile device market has exploded. Zuckerberg said mobile users are now more likely to be active daily on Facebook than desktop users.

While many people have argued that Facebook has been slow to develop its mobile offerings, Zuckerberg said that's the company's main focus now. "We've transitioned, and are now a mobile company," he said.

2. Recognize mistakes and know when to pivot.
With mobile top-of-mind, Facebook set out two years ago to create an internal framework called "Faceweb," an infrastructure for developing HTML5 for its mobile website. HTML5 is the latest version of the HTML code that's designed to render webpages correctly, no matter what type of device you're using.

Zuckerberg said Facebook has more people, on a daily basis, using its mobile website than its iOS or Android apps, combined. "Mobile web is a big thing for us," he said.

But after several months of development and testing with HTML5, Facebook discovered that it "wasn't getting the quality we wanted," Zuckerberg said. Having bet completely on HTML5, Facebook developers had to start from scratch, this time in native HTML.

"We burnt two years," Zuckerberg said. "It was really painful. I think probably we'll look back and say it was one of the biggest mistakes, if not the biggest strategic mistake we've made. But, we're coming out of that now."

3. Find a balance between mission and profits.
Earlier this year, in a filing with the Securities and Exchange Commission concerning Facebook's IPO, Zuckerberg stated, "we don't build services to make money; we make money to build better services."

While it's important to have a mission and stick to it, Zuckerberg said this week it's equally important to focus on the business. For instance, he said, in order to execute your mission you'll need to hire an outstanding team. To do that you'll likely need to incentivize those people by building a profitable business and creating useful products and services.

"Building a mission and building a business go hand-in-hand," he said. "It is true that the primary thing that makes me excited about what we're doing is the mission, but I also think, from the very beginning, we've had this healthy understanding which is that we need to do both."

What important business lessons would you add to this list? Let us know in the comments below.