The Future of Smartphones: 4G and Beyond

Sprint's HTC EVO 4G offers a sneak peek at the handset of the future.

By Scott Steinberg
March 26, 2010
Opinions expressed by Entrepreneur contributors are their own. 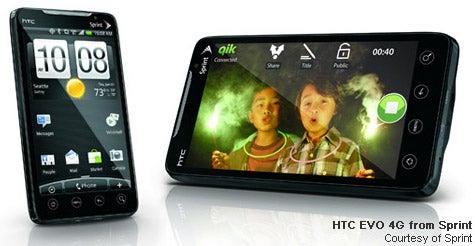 Thought it was hard enough to pick the right smartphone as is? Courtesy of the new HTC EVO 4G from Sprint, the decision just got that much tougher. The first Android phone that's compatible with both 3G and 4G (even higher-speed) wireless broadband networks, the handset promises to offer an impressive feature set--and, more important, killer download speeds.

Shipping this summer, as high-end mobile communications devices go, the hardware itself is nothing to scoff at. Consider the gadget's 4.3-inch touchscreen, which lets you pinch to zoom and ranks among the largest displays available on an Android phone. Well-suited to music, photos and streaming video, multimedia looks to be an upcoming strong suit--a bonus for entrepreneurs looking to tap into popular news destinations, social networks and online portals. Speaking of socializing, the gizmo also layers in a specialized user interface known as HTC Sense. Using it, you can access features like a Friend Stream that aggregates updates from popular social networks like Twitter, Facebook and Flickr and streamlines them into one easily digestible feed. There's also a special function known as Leap that lets you pinch to view open programs, making multitasking that much easier.

Bonuses further extend to not just one, but a pair of integrated digital cameras. There's an 8-megapixel model with auto-focus and high-definition video recording capabilities on the back, plus a 1.3-megapixel unit on the front. The former should prove useful for multimedia creation and content sharing, while the latter could come in handy when videoconferencing or snapping your own facial expressions. Either way, there's massive potential there to connect with clients and colleagues, generate content for promotional use on your blog or website and create custom video for distribution through online channels. Live streaming of shareholder meetings and tradeshows seems an immediate possibility via the Qik application. Ditto for the opportunity to upload HD video to online aggregators such as YouTube and Metacafe instead of the pixilated standard-def footage that's currently commonplace. Connect an HDMI cable, and there's also the option to output your clips, e.g., client testimonials, hands-on product demos, etc., straight to HDTV, while a kickstand enables easier on-device viewing.

Intriguingly, the EVO 4G can also function as a mobile wireless hotspot. A maximum of eight Wi-Fi-ready devices from laptops to MP3 players and digital cameras can connect and tap into its internet connection. Albeit only available in 27 cities from Atlanta to Chicago, Las Vegas and Seattle (service launches in New York, Boston, San Francisco and other metropolitan areas are planned for later in 2010), Sprint claims its 4G network delivers 10 times faster speeds than what you'd get from 3G networks. Bearing this in mind, large files such as high-def videos and sizable software packages should be retrievable in a fraction of the waiting time users have typically come to expect from 3G devices.

Heavy Web browsers may benefit as much as multimedia fans as well, given that support for Adobe Flash is also built in, which powers high-quality animated and video content. Tack on support for a range of thousands of downloadable third-party apps via the Android Market (although, granted, nowhere near as many as you'd find on the iPhone), and the possibilities multiply. Coupled with the device's greater speeds, new programs could allow working professionals to connect, communicate and collaborate in a range of unexpected and far-reaching ways. Given enough bandwidth, you could video chat with a coworker live in real-time while watching a corporate webcast and sharing supporting links on the topics being discussed.

While it's too early to tell whether the EVO will ultimately fly, at first glimpse it appears to offer a wealth of compelling features for entrepreneurs and everyday users alike. Admittedly, chances are even if you do buy one, you may find yourself stuck operating at standard 3G speeds on occasion. Then again, in the immediate, it may be a small price to pay for the chance to piggyback on a wider 4G rollout, and get a look at what the future of smartphones could very well hold.