We're Definitely Not in Denmark 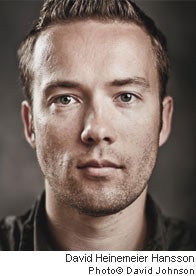 David Heinemeier Hansson comes from a place where calls never drop and mobile phone customers only pay for the minutes they use. That place isn't Shangri-La--it's Copenhagen, Denmark. There are more places like it, but judging from the rate at which U.S. mobile users complain about their service, none of them is in the U.S.

Hansson is a partner in 37signals, a Chicago software and Internet applications firm focused on small businesses. He moved from Copenhagen to Chicago four years ago, and he still isn't accustomed to the differences in quality and cost.

"In Denmark, I never had dropped calls, and here it happens all the time, he says. "And everyone in Denmark is on minute plans that amount to about $15 to $20 a month. Here, you pay $50 a month minimum. It's ludicrously insane.

Hansson is an iPhone customer on AT&T's network, and his complaints about U.S. mobile traditions have not diminished his love of anything with Apple's name on it.

"I'm Apple all the way--iPhone, iPad, iPro. If Apple makes it, I'll buy it, he says. The latest addition to his collection is the iPad. "Where it really helps are those situations where I'm asking myself if I really want to lug a laptop around, he says. "The iPad is easy to carry around and work on wherever you need to.

Hansson's device family also sets him up for an unwired lifestyle and professional life. "I've been exclusively mobile for the last four years, he says. "One number for everything makes everything really simple.

Because 37signals is in the business of creating business applications, the mobile apps Hansson uses daily for business tend to be his company's creations. Most often, he's using Backpack, an organizational app that helps him keep track of flight plans, photos, to-do lists and multiple calendars. To communicate with co-workers, he uses 37signals' Campfire, which improves on instant messaging by enabling group chat rooms.

Hansson also does a lot of text messaging on the go, and he monitors Twitter from his mobile phone because it's a major marketing feed for 37signals. For fun, he plays Firemint's Flight Control and Sid Meier's Civilization.

These are just some of the apps that keep Hansson a devoted Apple user, but it's clear he doesn't feel as married to his mobile service provider. "The second that the iPhone is available for any other carrier, I'm switching [from AT&T].