Slideshow: Inspiring Words From the March on Washington

This week marks the 50th anniversary of the March on Washington where Martin Luther King Jr. made his now legendary "I Have a Dream" speech. That event on Aug. 28, 1963, drew 200,000 people to the National Mall in Washington, D.C., to press for issues that are just as relevant today, including civil liberties and a rise in the minimum wage. This week's milestone gives us a chance to reacquaint ourselves with the great steps taken at this event as well as the inspiring words spoken and sung on that historic day. Below is a selection of inspiring excerpts from that day’s speeches and performances. 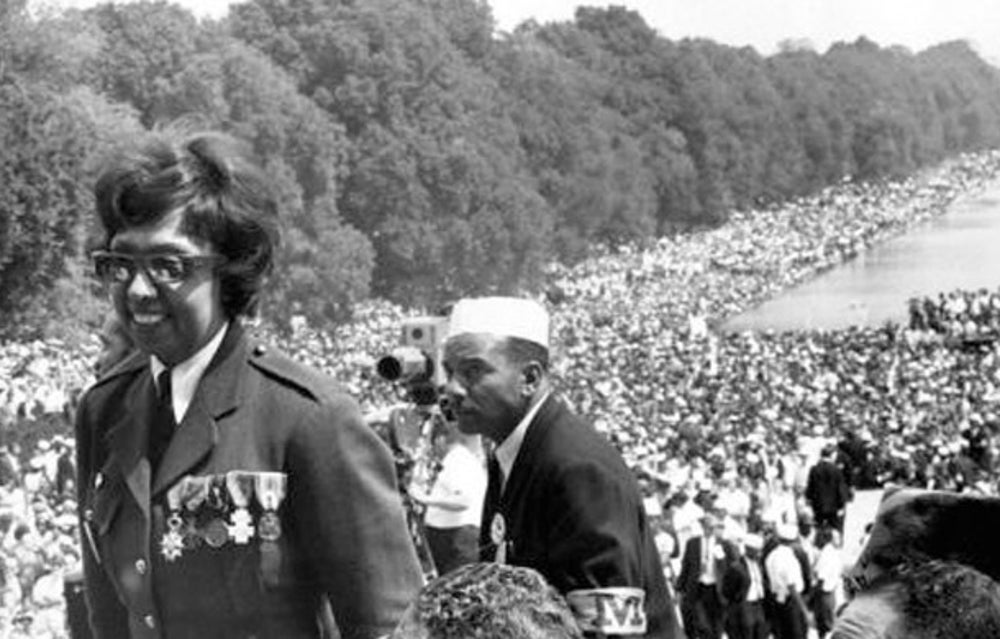 Josephine Baker, the world-renowned singer and actress, had long since adopted France as her homeland and had even joined the French Resistance. Still, she was an active supporter of the American civil rights movement and was the only woman to address the crowd at the National Mall. An excerpt of her remarks is below.

"You know, friends, that I do not lie to you when I tell you I have walked into the palaces of kings and queens and into the houses of presidents. And much more. But I could not walk into a hotel in America and get a cup of coffee, and that made me mad. And when I get mad, you know that I open my big mouth. And then look out, 'cause when Josephine opens her mouth, they hear it all over the world." 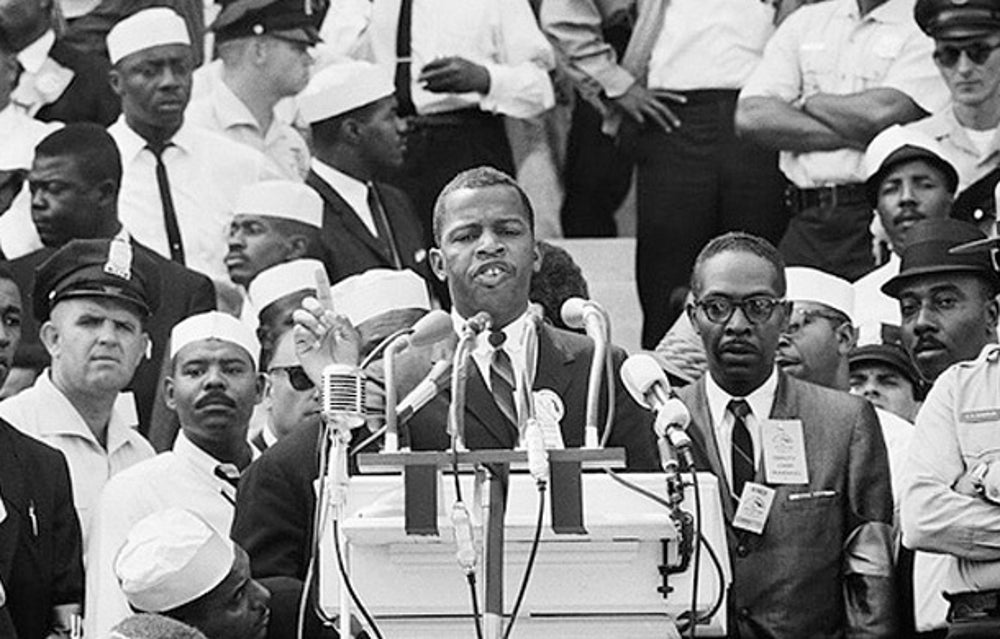 John Lewis, currently a U.S. Representative for Georgia's 5th congressional district, was 23 at the time of the March on Washington and the youngest speaker to come to the podium. He represented the Student Non-violent Coordinating Committee as its chairman and was one of the original "big six" organizers of the march. An excerpt is below.

For a full transcript and audio, visit Open Vault. 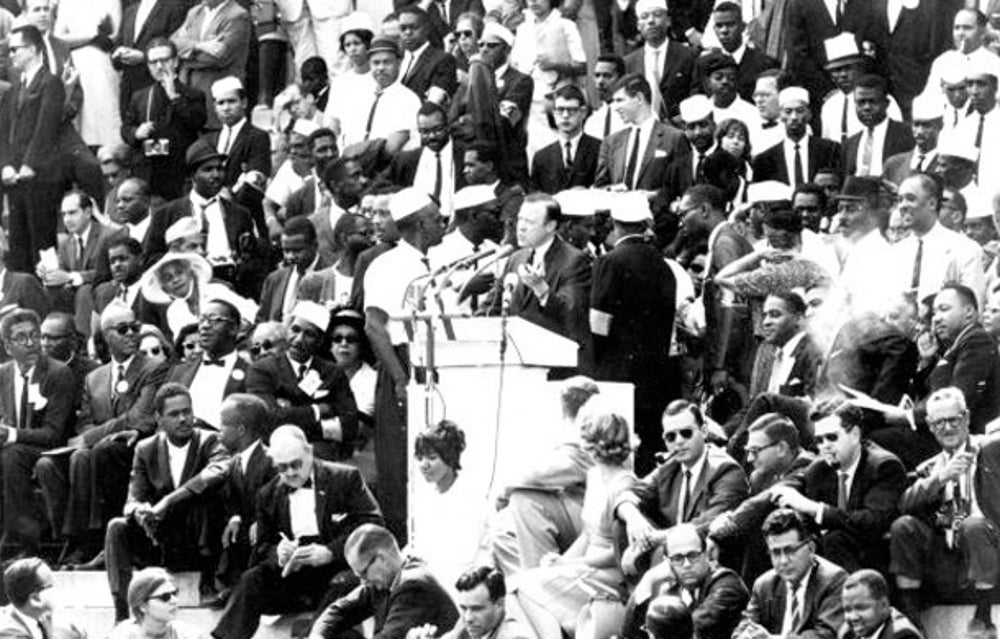 Walter P. Reuther, the UAW president, was no stranger to the era's civil rights rallies. He'd accompanied Martin Luther King Jr. to events including one in Alabama where the crowd was doused by the police with fire hoses and King was placed in jail. After the demonstration, Reuther bailed him out.

Many civil rights mobilizers were labor activists and the UAW let planners for the March on Washington work out of its union halls and even paid for the event's sound system. Below is an excerpt from Reuther's remarks.

"I am for civil rights, as a matter of human decency, as a matter of common morality. But I am also for civil rights because I believe that freedom is an indivisible value that no one can be free unto himself. And when Bull Connor with his police dogs and fire hoses destroys freedom in Birmingham, he is destroying my freedom in Detroit. And let us keep in mind, since we are the strongest of the free nations of the world, since you cannot make your freedom secure, accepting as we make freedom universal, so all may enjoy its blessings, let us understand that we cannot defend freedom in Berlin, so long as we deny freedom in Birmingham."

For a full transcript and audio, visit Open Vault. 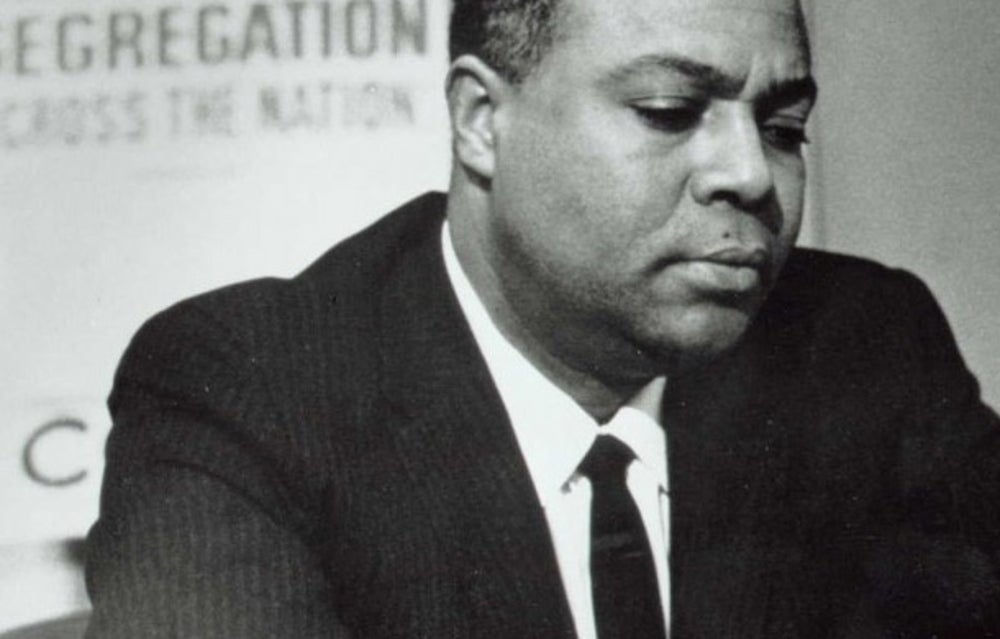 James Farmer was a prominent activist who organized the first 1961 Freedom Ride for desegregation and founded the Committee for Racial Equality. Like many protesters, Farmer was often arrested for his activist work and could not attend the March on Washington because he had been imprisoned for "disturbing the peace" in Plaquemine, La. In his absence, Floyd McKissick, the National Chairman of the Congress on Racial Equality, read Farmer's prepared remarks. An excerpt is below.

"By marching on Washington, your trampin' feet have spoken the message, the message of our struggle in Louisiana. You have given notice of the struggles of our people in Mississippi and Alabama too, and in California, and in New York, and Chicago, and in Brooklyn. You have come from all over the nation, and in one mighty voice, you have spoken to the nation.

You have also spoken to the world. You have said to the world by your presence here, as our successful direct action in numberless citizens has said that in the age of thermal nuclear bombs, violence is outmoded to the solution of the problems of men."

A full transcript can be found in the archives at The King Center. 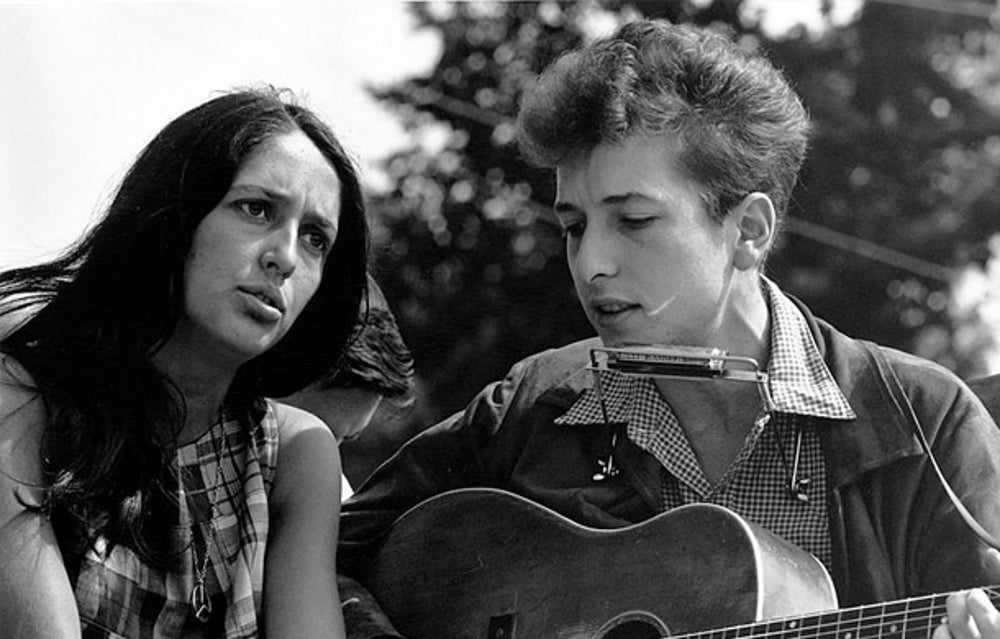 Singers Bob Dylan and Joan Baez were both prominent in the Civil Rights movement and performed a number of folk songs at the march. As a solo, Dylan performed his then unreleased Only a Pawn in Their Game, about the assassination of activist Medgar Evans.

Below is an excerpt from "Keep Your Eyes on the Prize," performed by Baez and Dylan with its songwriter, Len Chandler.

"Got my hand on the freedom plow
Wouldn't take nothing for my journey now
Keep your eyes on the prize
Hold on!"

Watch the performance on this compilation video at the 16:30 mark. 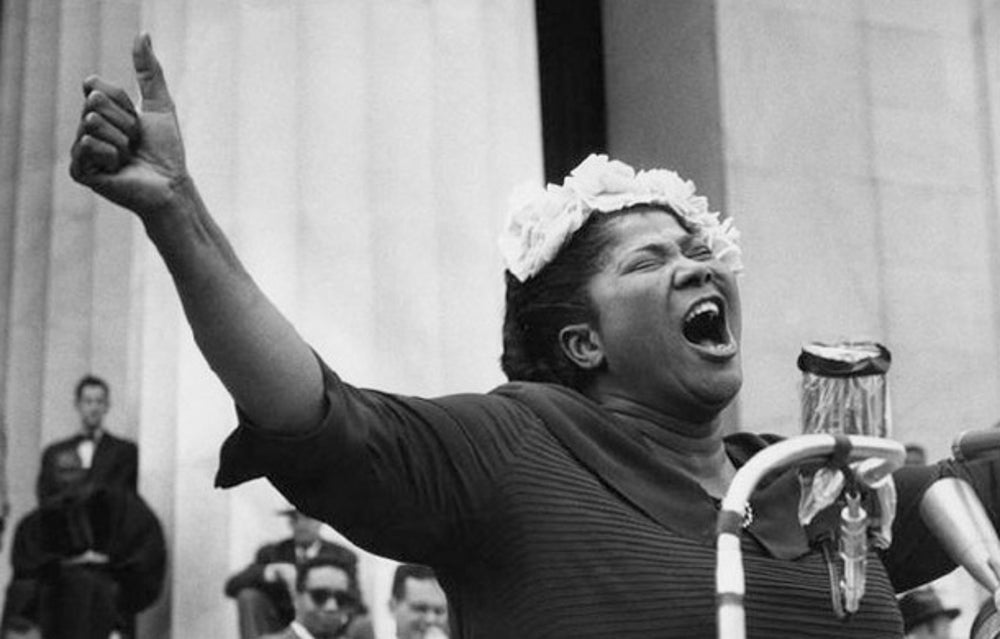 Mahalia Jackson was considered the greatest gospel singer in the world in her time. She was active in the civil rights movement performing at events that served as percursors to the March on Washington, including the Prayer Pilgrimage for Freedom in 1957 where the above photo was taken. She addressed the crowd at the March on Washington with two songs, "I've Been 'Buked, and I've Been Scorned" and "How I Got Over," an excerpt of which is below.

"Coming from the north, south, east, and west
On their way to a land of rest
Lord, we gonna join the heavenly choir
We gon' sing and never get tired"

To watch video of the performance, refer to this YouTube video. 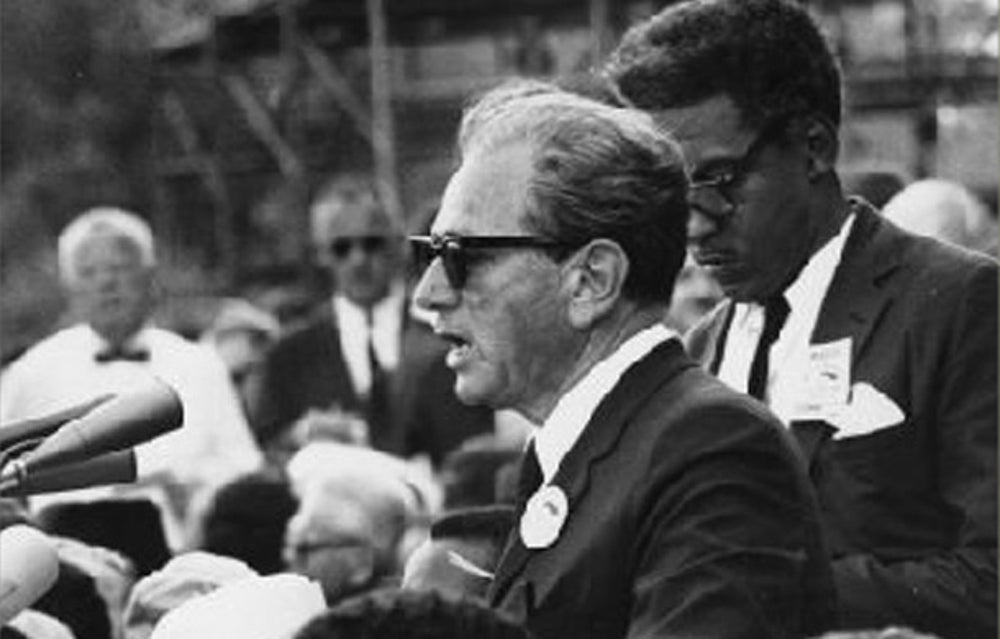 Rabbi Joachim Prinz, who arrived in the U.S. after being expelled from Germany by the Nazi Government, became president of the American Jewish Congress and active in civil rights issues. He was a founding leader of the March on Washington and one of several religious leaders to speak at the Lincoln Memorial that day. He spoke just minutes before Martin Luther King Jr. took the podium. An excerpt is below.

"As Jews, we recall our own history of slavery, our own experience of life in the ghetto. Like the Negro, we learned that a proclamation of emancipation was not enough.To know freedom, we had to free ourselves. To enjoy the blessings of liberty we had to liberate ourselves."

A full transcript can be read in the archives of The King Center. 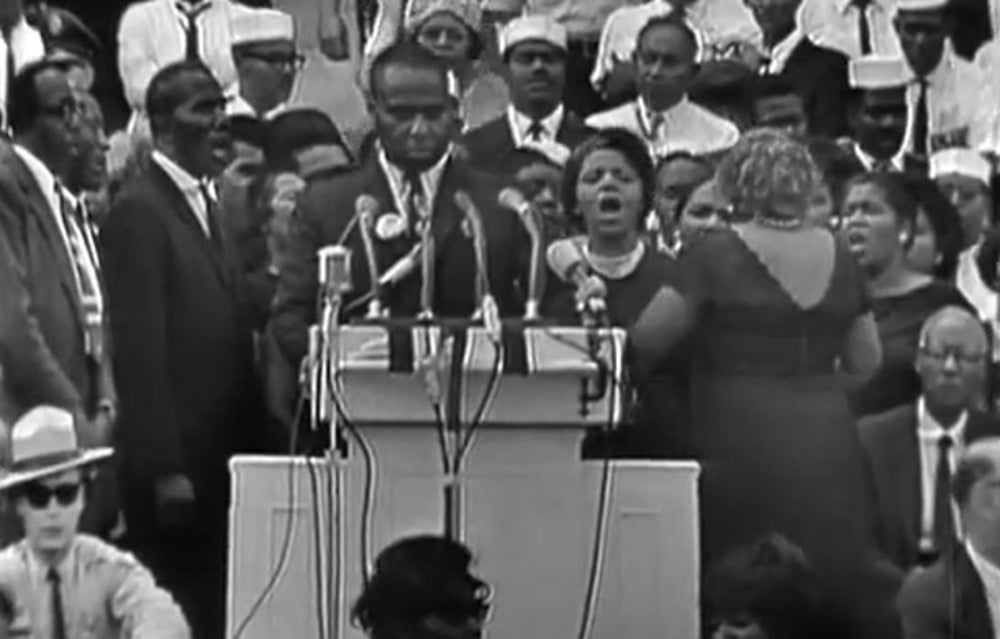 Eva Jessye was a composer and conductor who worked for Gertrude Stein and was the music director for George Gershwin's Porgy and Bess. She used spirituals often in her work including at the March on Washington. An excerpt of the song Freedom that she and her choir performed that day is below.

An excerpt of the perfomance can be seen on this complilation video at the 21:45 mark. 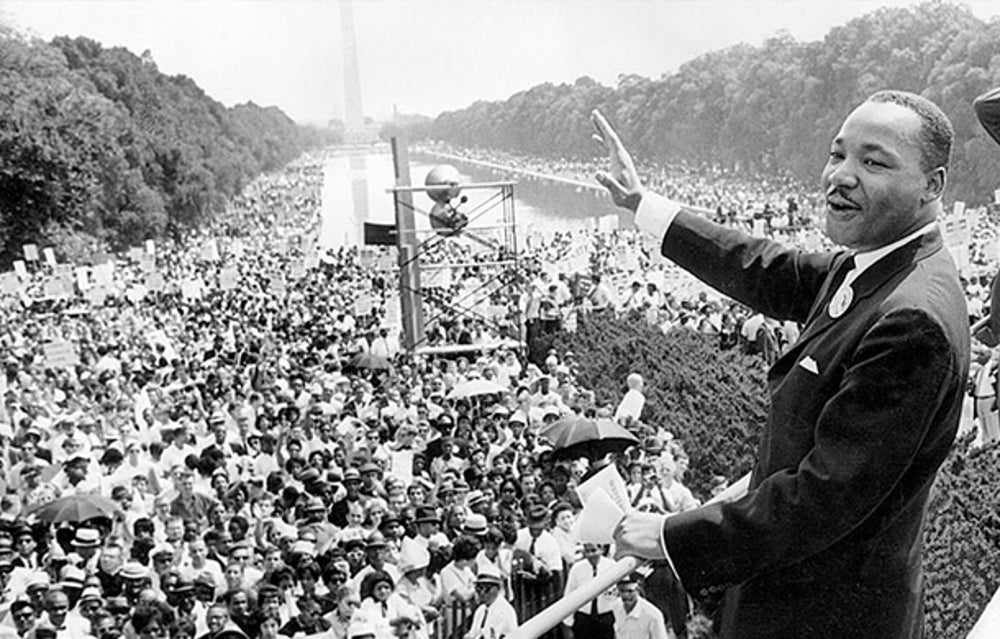 Martin Luther King Jr. was a clergyman and civil rights leader who supported non-violent activism. Versions of his "I Have a Dream" speech at the March on Washington had been presented at other rallies, including one in Detroit just two months earlier. However, a prompting by Mahalia Jackson to "Tell them about the dream!" encouraged King to shift from his prepared remarks, contributing to what is arguably one of the most famous speeches in American history. An excerpt is below.

For a full transcript of the speech and audio, refer to Open Vault. 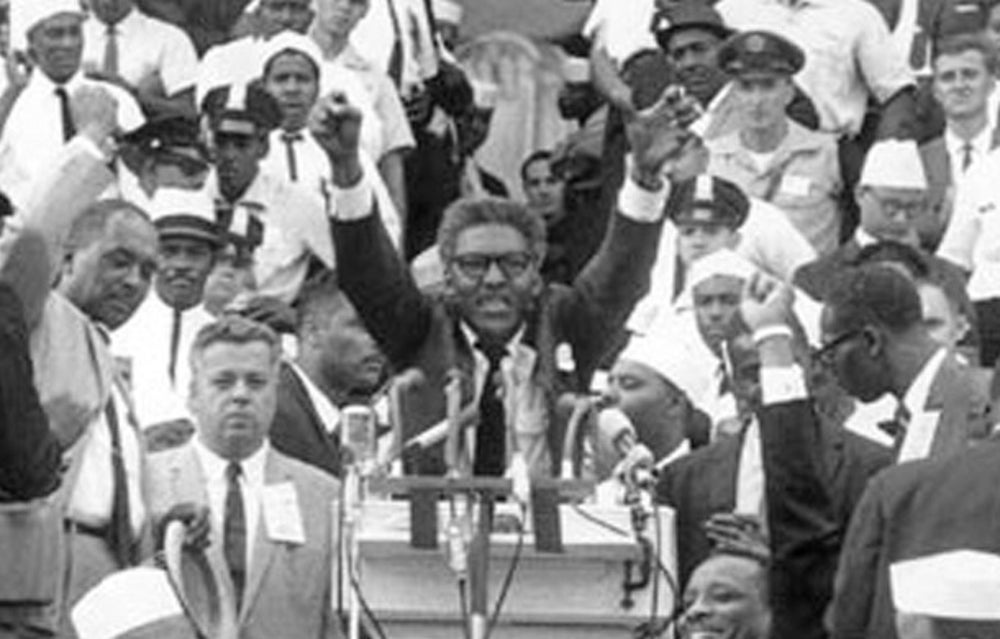 Bayard Rustin was instrumental in pulling together in less than eight weeks one of the largest protest marches of its time. His remarks at the March on Washington listed the event's demands, such as school desegregation and a ban on housing discrimination, a list that would later be brought to President John F. Kennedy. Below is an excerpt of the pledge he asked event-goers to make to carry the movement's momentum to their hometowns.

"I pledge that I will not relax until victory is won. I pledge that I will join and support all actions undertaken in good faith in accord with the time-honored Democratic tradition of non-violent protest, of peaceful assembly, and petition, and of redress through the courts and the legislative process."

Refer to Open Vault for audio and a complete transcript of the speech. 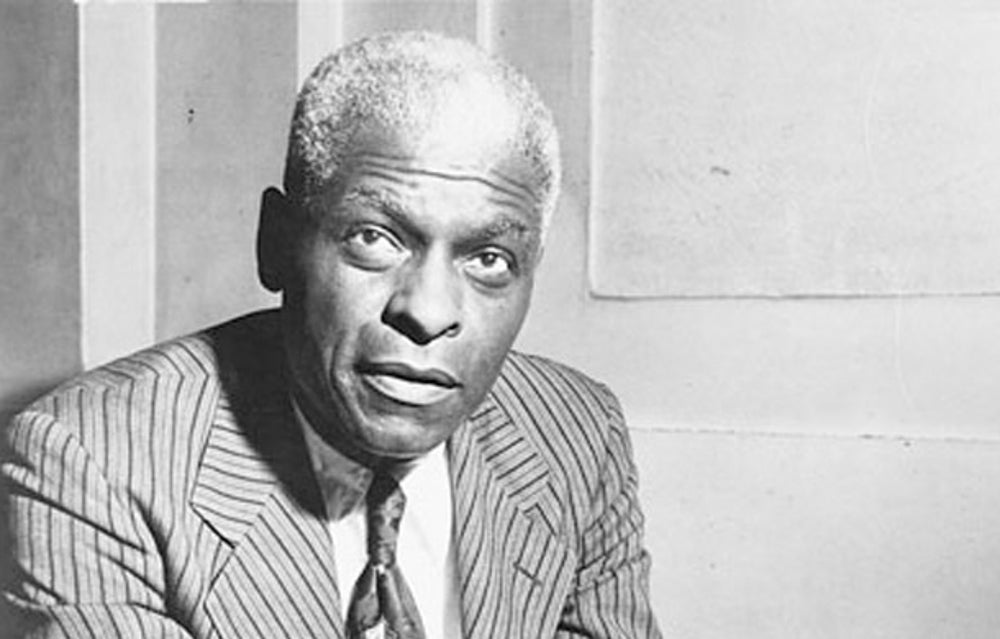 Mays was the president of Morehouse College and a mentor to Martin Luther King Jr. He was also a minister and read the benediction, or blessing, at the event's closing. An excerpt is below.

"In peace and in war thou hast blessed America as the nations of the earth look to the United States for moral and democratic leadership. May we not fail them, nor thee. Please God, in this moment of crisis and indecision give the United States wisdom, give her courage, give her faith to meet the challenge of this hour. Guide, teach, sustain and bless the United States, and help the weary travelers to overcome, someday soon. Amen."

A complete transcript of the benediction can be found on Open Vault.