22 McDonald's Facts That May Surprise You

Grace Reader
Contributor
May 15, 2017 6 min read
Opinions expressed by Entrepreneur contributors are their own.

People are certainly free to retire older, but this woman takes the cake. Or should I say Big Mac?

Goh Gwek Eng works at a McDonald’s store in Singapore. Eng has 10 children and 20 grandchildren and says that after they left the house, it was too quiet for her to be at home.

Eng said that she plans to work at McDonald’s as long as she’s healthy. (Studies show that people who work even when they are within retirement age are generally healthier and happier.) Her only complaint? Sometimes standing by the food fryer can get a little hot.

Here are 19 more fun facts about the hamburger haven.

Related: One of McDonald's Oldest Employees Is This 92-Year-Old Woman in Singapore

On the original McDonald's menu, a hamburger cost 15 cents. 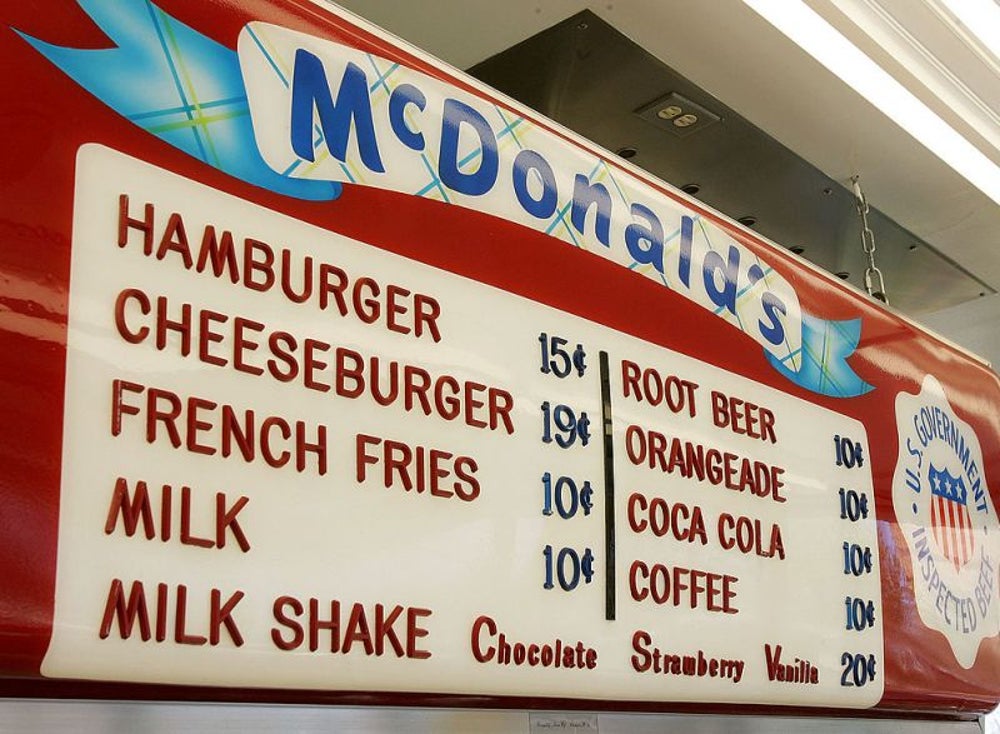 On May 15, 1940, Dick and Mac McDonald’s opened the first-ever McDonald’s store in San Bernardino, Calif. While you can still score a McDonald’s hamburger there for only a dollar, back then people were only paying 15 cents for a menu item.

From the Fish Filet to the Big Mac, today’s menu boasts a variety of items to choose from. Back then, things were much simpler, with the only food options being a hamburger, a cheeseburger or french fries. That’s right: McDonald's didn’t even have McNuggets back then. 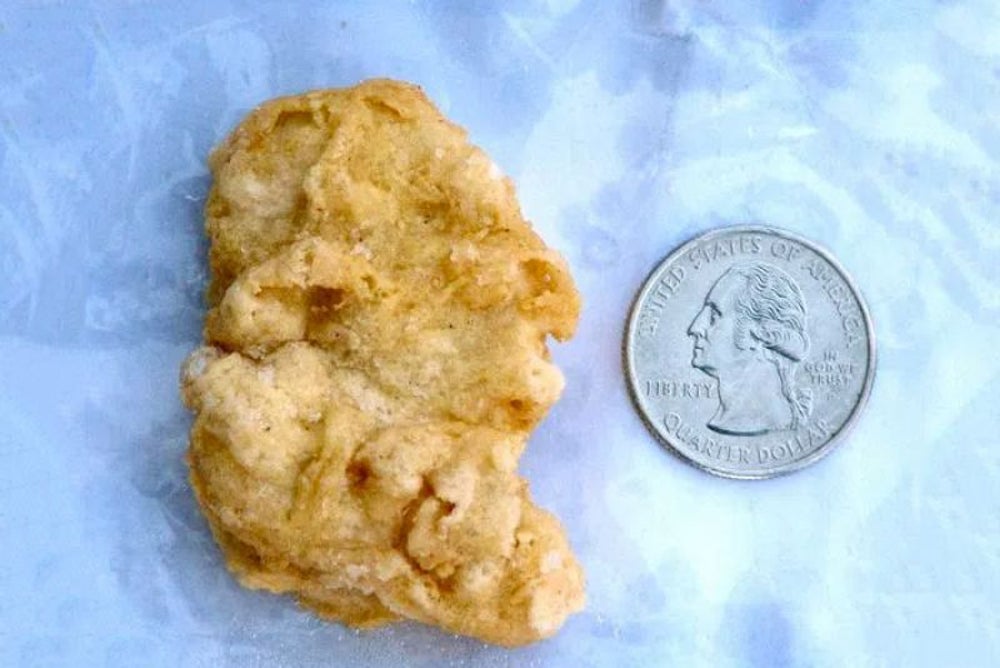 Why? The chicken nugget resembled George Washington. Twenty-three people bid on the three-year-old nugget. EBay generally has a rule against selling expired foods, but it made an exception.

The woman selling the nugget, Rebekah Speight, said that she was raising money for children at her local church to go to summer camp. 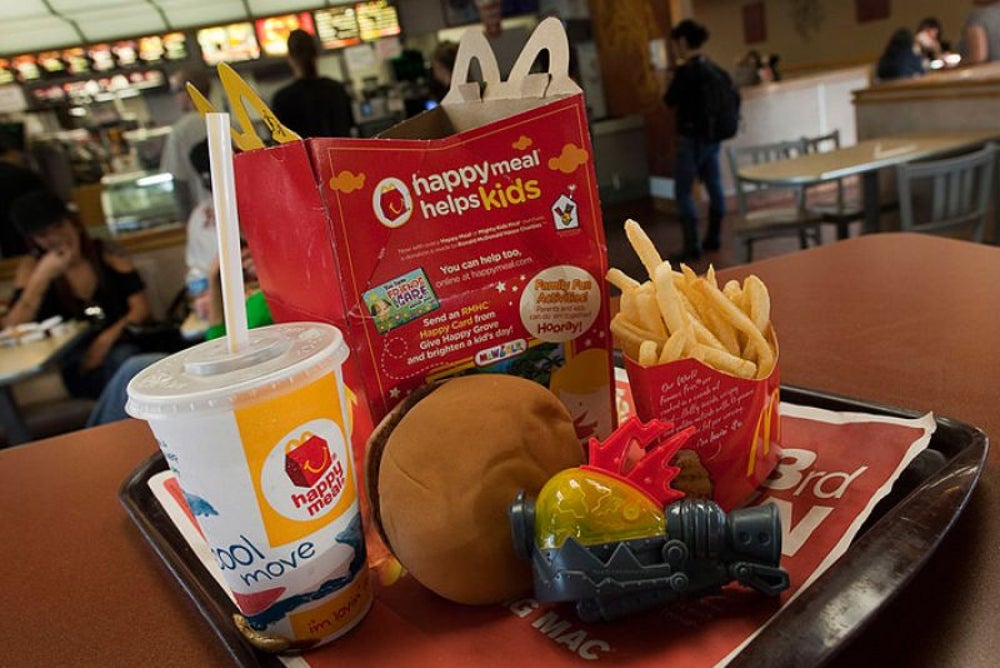 McDonald’s has started to include books instead of toys in Happy Meals, placing more books in kids’ hands than those catalogued in The Library of Congress, the world’s largest library. 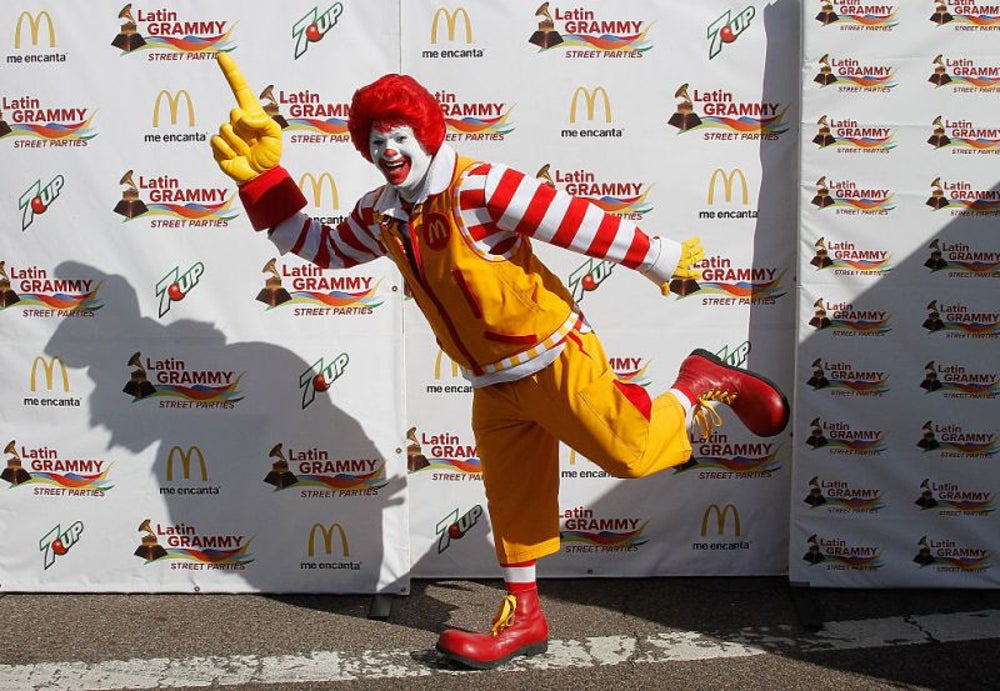 According to the book Fast Food Nation, Ronald McDonald is identifiable by 96 percent of children around the world, which would make him the only fictional character more recognizable than Santa Claus.

Justin Timberlake and Pharrell Williams worked on the “I’m Lovin’ It” song. 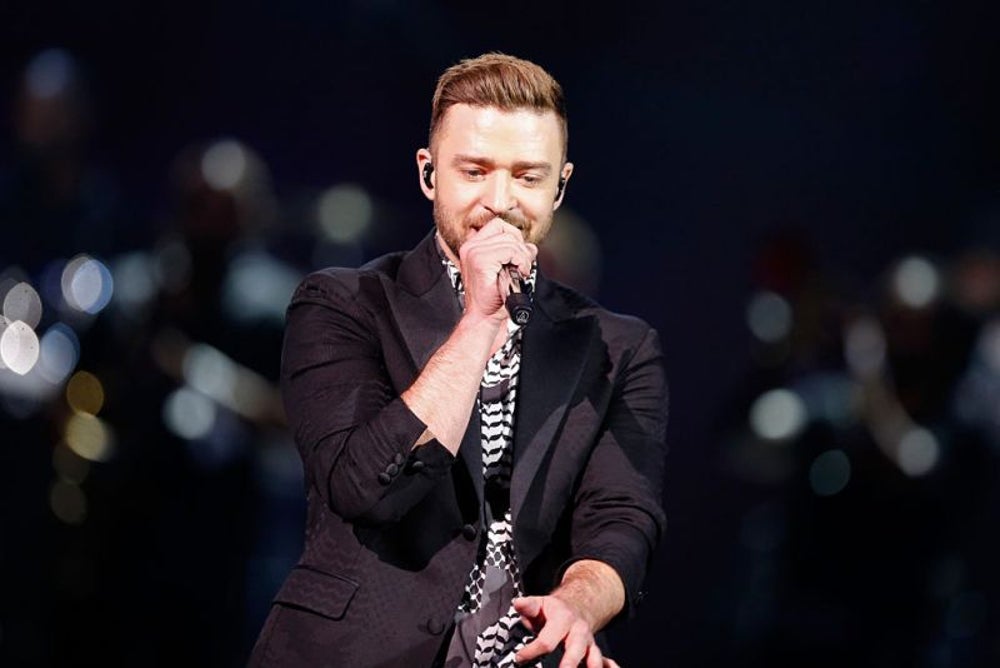 McDonald’s “I’m Lovin’ it” theme song is performed by Justin Timberlake, who made an estimated $6 million for the jingle.

Timberlake wasn’t alone: in 2003, Pharrell Williams produced an “I’m Lovin’ It” EP which topped the charts in Belgium. 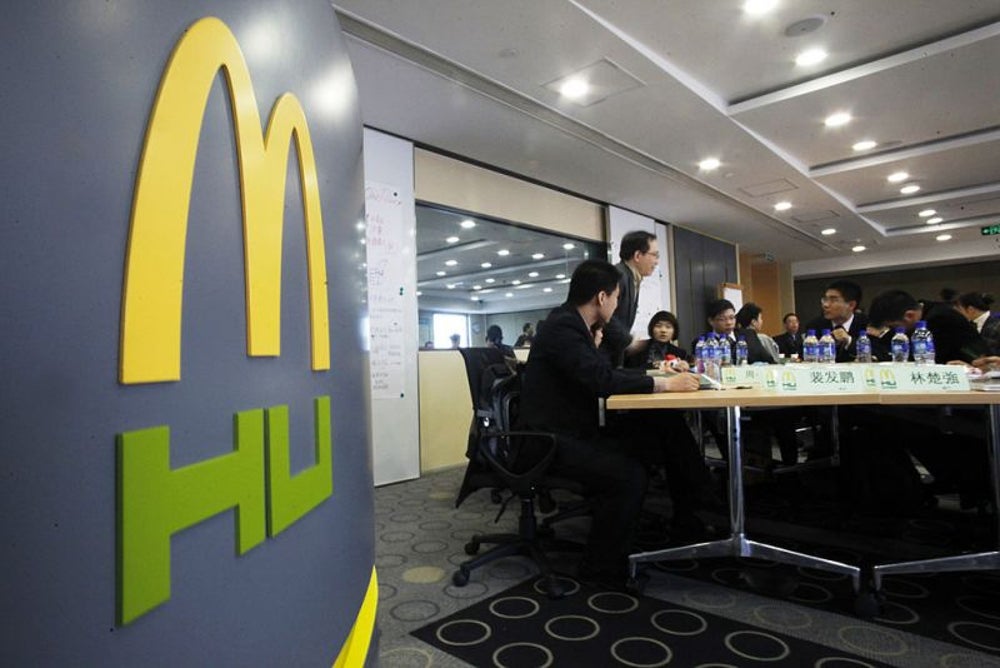 Image credit: Bloomberg | Getty Images
Hamburger University is a global training program that an estimated 7,500 students attend annually. McDonald’s records show that around 80,000 employees have attended since the program first started in 1961. 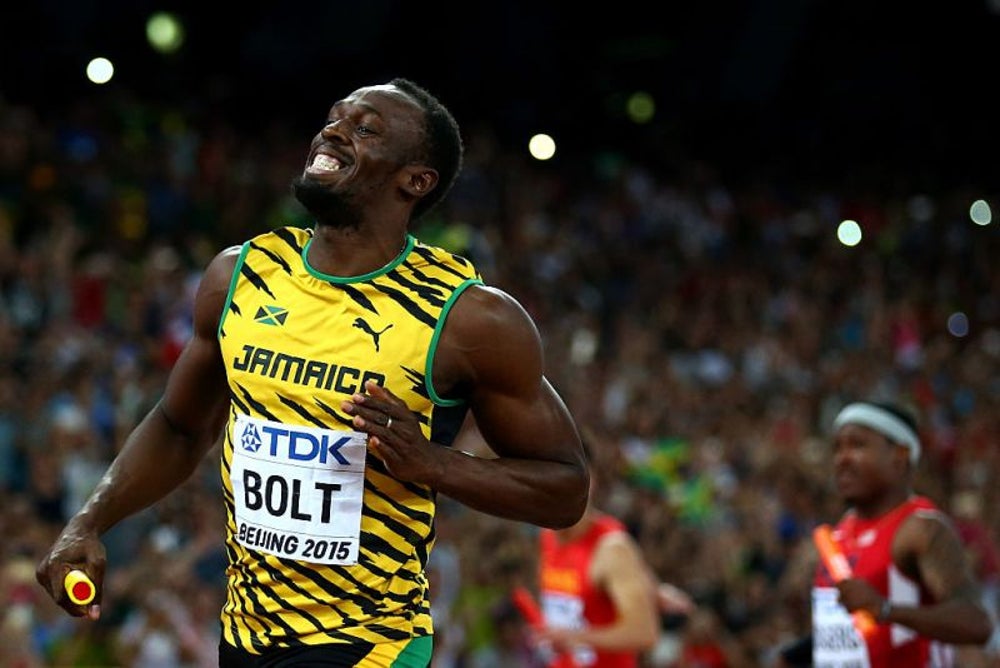 When Bolt was asked if he was worried about getting fat, Bolt told CNN, “Hell no. That’s one thing I’m determined not to have. I have a bet with a couple of people.”

However, he has noted that as an Olympic athlete he has cut down on the fast food and started eating more vegetables.

McDonald’s once made the Big Mac even bigger. 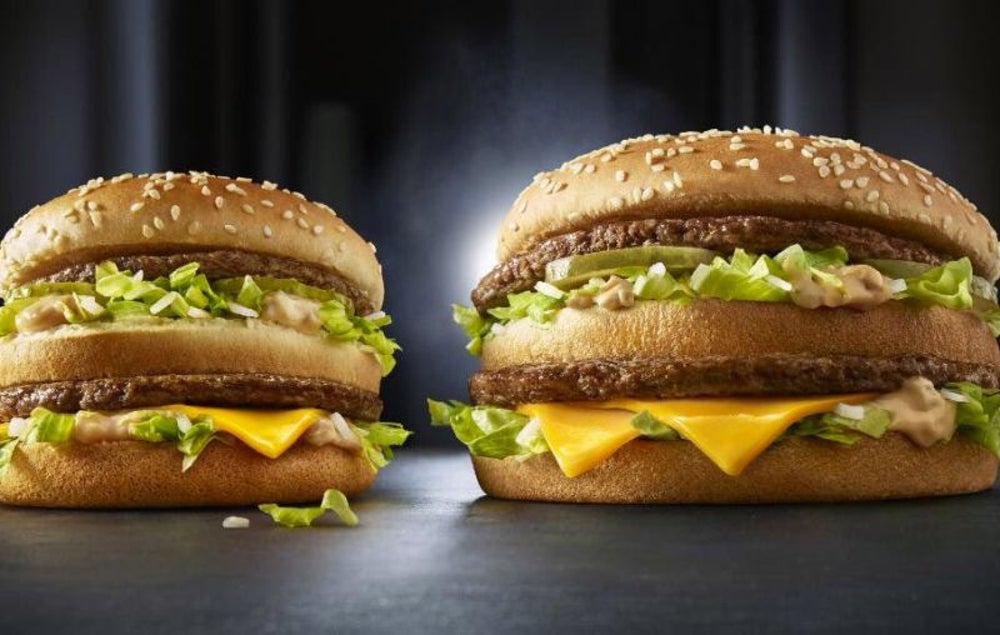 In April 2016, McDonald’s rolled out their Giga Big Mac in Japan, which is essentially two burgers stacked on top of each other.

You can have your wedding party at McDonald’s in Hong Kong. 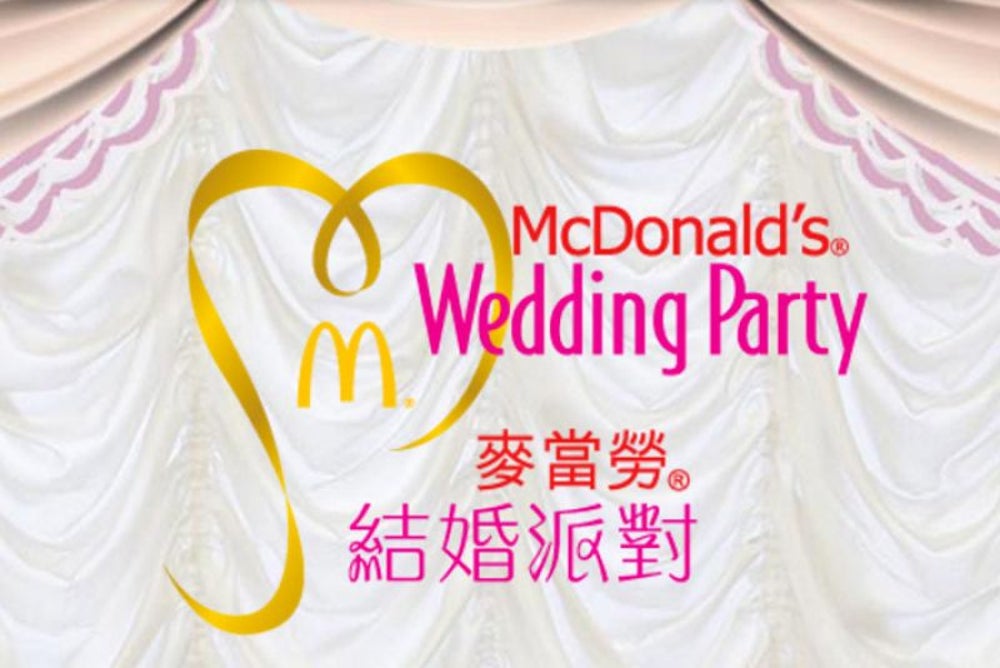 If you’re living in Hong Kong and looking to get married at McDonald’s, you're in luck. For $9,999 you can enjoy a Love Forever party, french fry picture frame included. 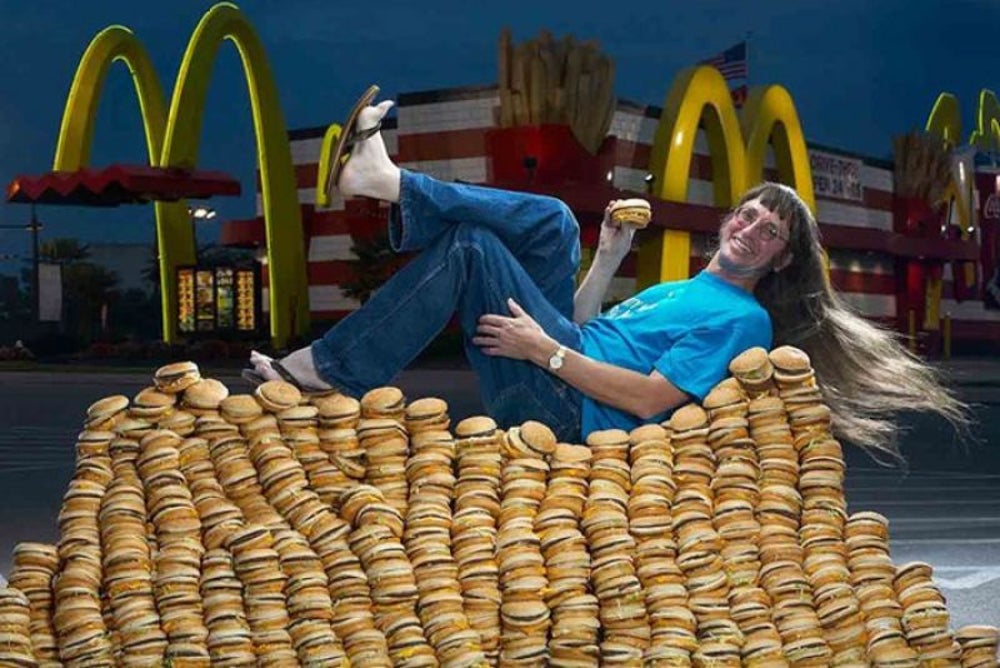 Donald Gorsky holds the Guinness World Record for the most Big Macs consumed. He has had at least one Big Mac a day since 1972, totaling 26,000 Big Macs in his lifetime.

Gorksy told WQAD that he has also had a Big Mac in every state.

At a Swedish ski resort, you can ski thru a McDonald’s. 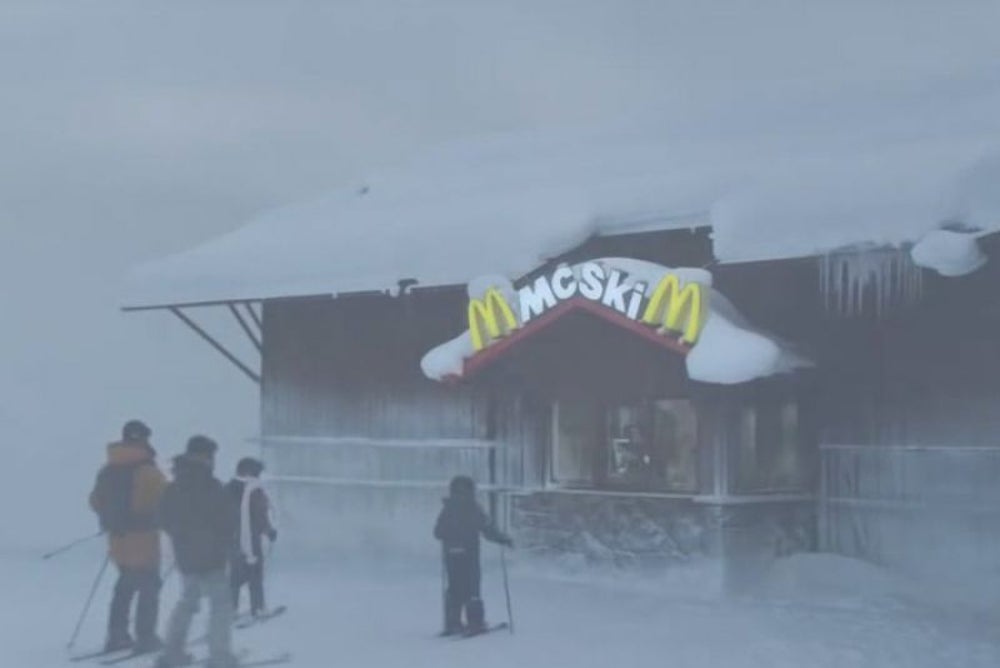 If you’re looking to burn off some calories, “McSkiing” is the way to do it.

Lindvallen, a ski resort in Sweden, has been allowing snow enthusiasts to ski through its McDonald’s location since 1996. Check out this commercial that features the ski-thru.

Over 10 years, 700 claims were filed for burns due to McDonald’s coffee -- until one famous lawsuit. 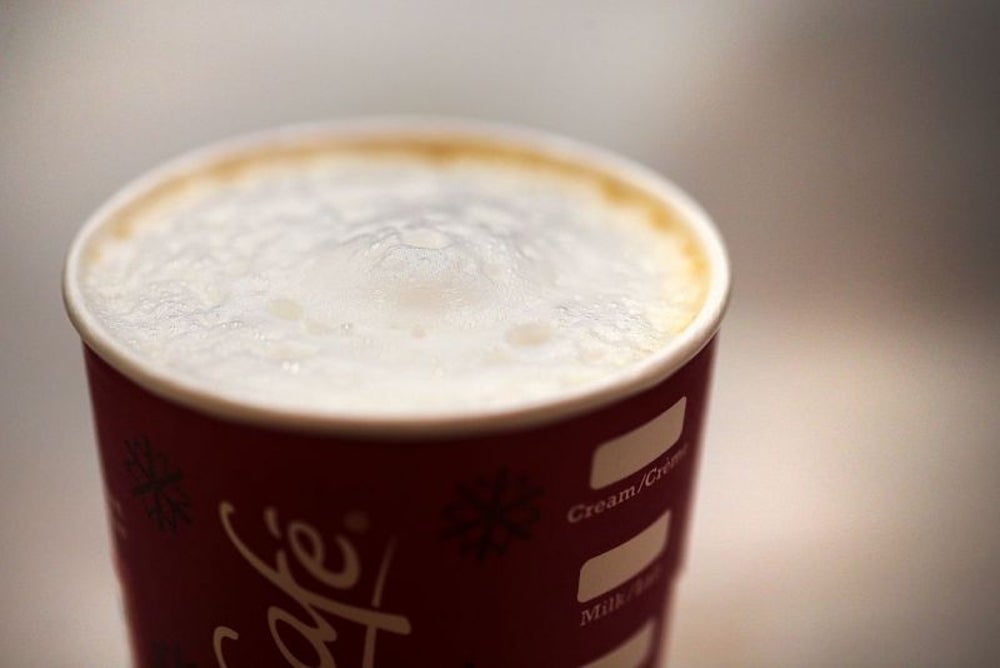 In 1992, a woman spilled coffee on herself while sitting in the passenger seat of a car at a McDonald’s drive-thru, getting third-degree burns as a result. She sued McDonald’s and was awarded nearly $3 million, which was lowered to $640,000.

Documentation was released by McDonald’s showing that there were more than 700 claims by people burned by coffee between 1982 and 1992.

There is a McDonald’s in all but 75 countries. 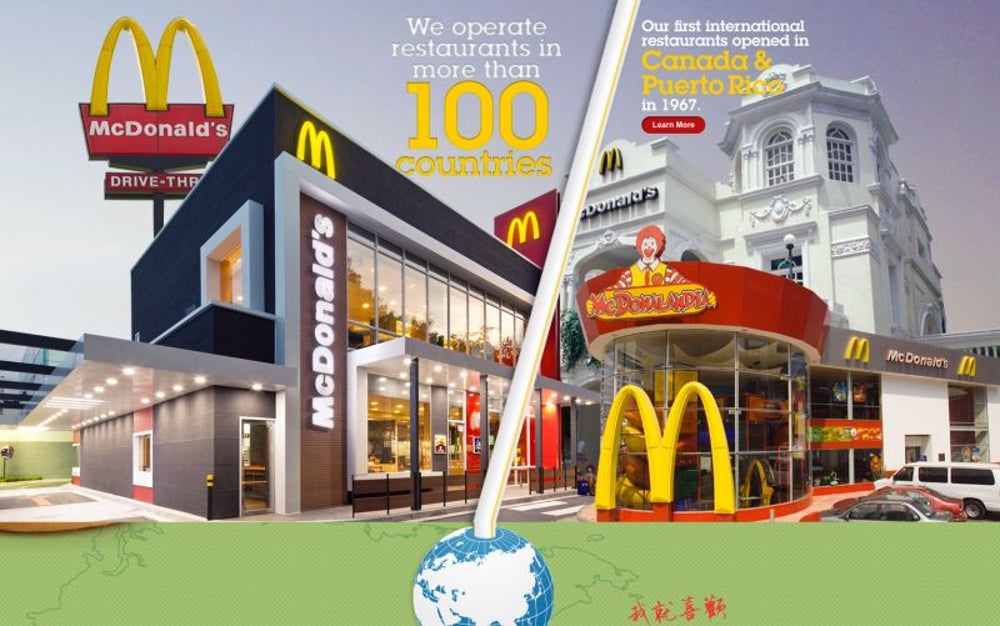 Even though McDonald’s has a strong presence overseas, North Korea, Bolivia and Iceland are among the countries that don’t have a McDonald’s. (McSad!)

According to the World Atlas, there are about 194 countries in the world. McDonald’s is currently located in 119 countries.

The world’s largest McDonald’s is in Orlando, Fla. 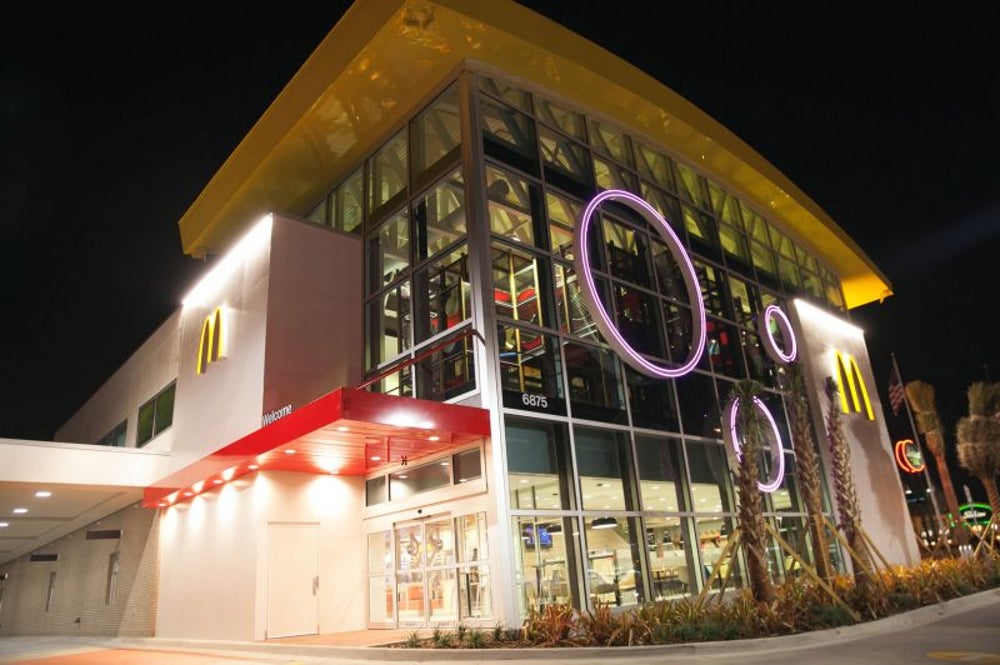 Image credit: McDonald's | Oerther
Even though the Orlando location was already the largest franchise, the store upgraded to 19,000 square feet in 2016. The store includes a bowling alley, arcade games and slides for children. The location even frequently hosts concerts and gator shows.

Stars such as Jay Leno and Pink worked at McDonald’s before becoming famous. 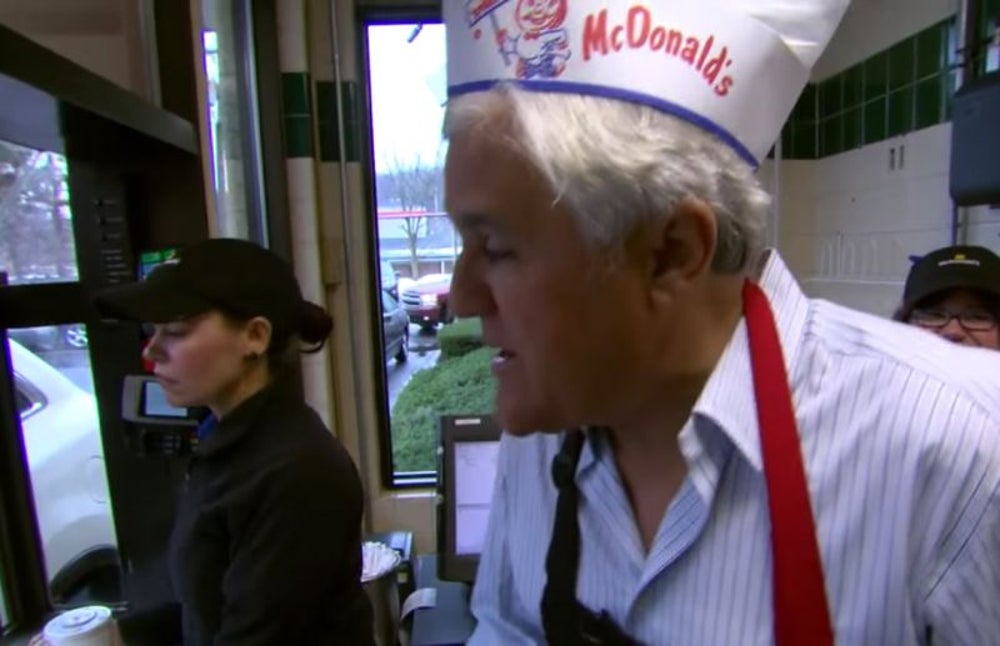 Image credit: 60 Minutes
Pink, Rachel McAdams, Jay Leno and Shania Twain have all claimed to have worked at McDonald’s. Leno even returned to the same McDonald’s for a special on 60 Minutes, where he showed off his burger-flipping skills.

McDonald’s airlifted burgers to homesick athletes during the 1968 Olympics. 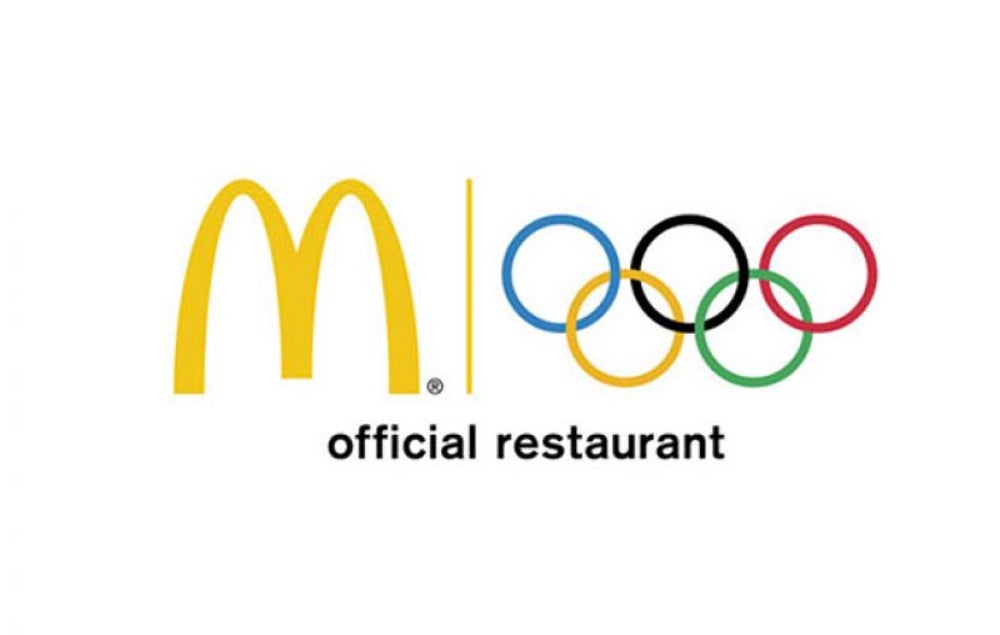 Athletes in Grenoble, France, requested burgers from McDonald’s during the 1968 Olympics to feel less homesick.

McDonald’s became an official sponsor of the Olympics eight years later -- and even has an Olympic swimming pool in Los Angeles, Calif.

McDonald’s feeds around 1 percent of the world’s population every day. 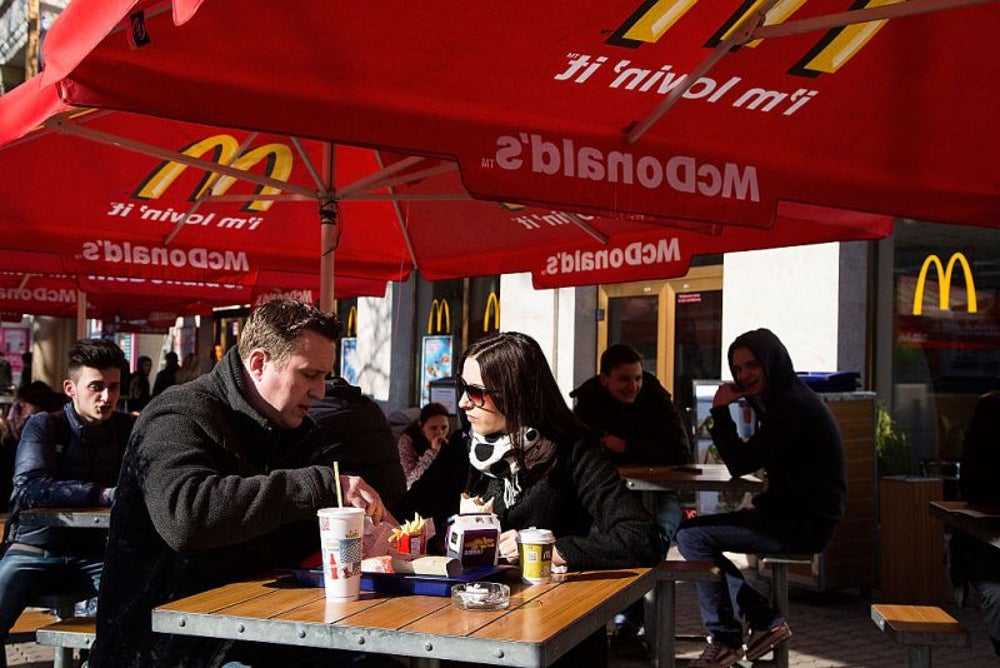 Image credit: Carsten Koall | Getty Images
Sixty-eight million people are served every day at McDonald’s, which is approximately 1 percent of the world population. McDonald’s sells an average of 75 burgers a second.

McDonald’s Caesar salad is about as unhealthy as Big Mac. 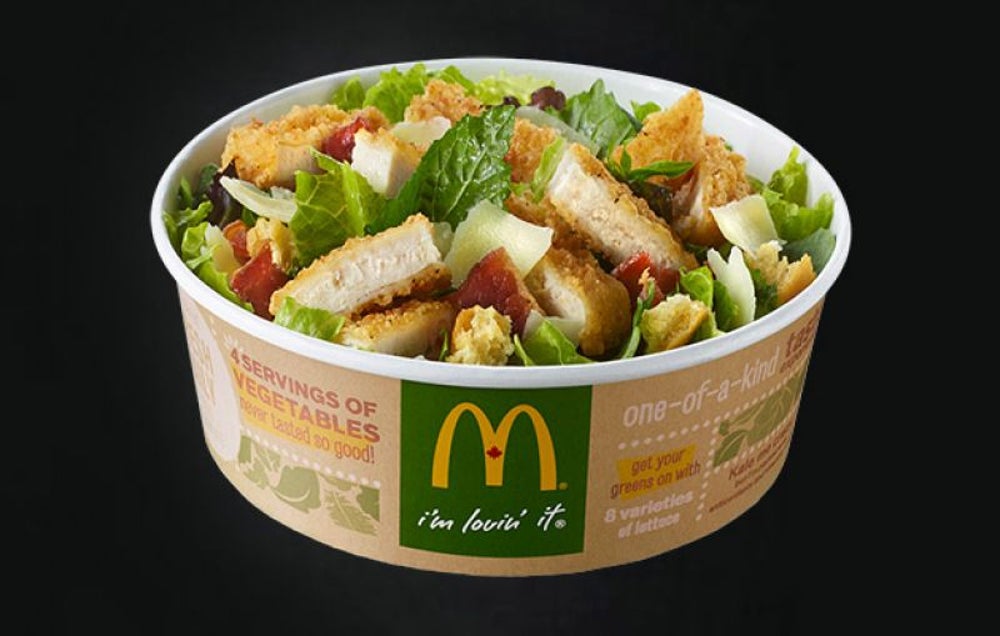 McDonald’s Keep Calm, Caesar On salad has 520 calories in it -- only 20 less than a Big Mac. More surprising is the amount of sodium in the salad -- 1,140 mg. The recommended daily average sodium intake is 2,300 mg per day. 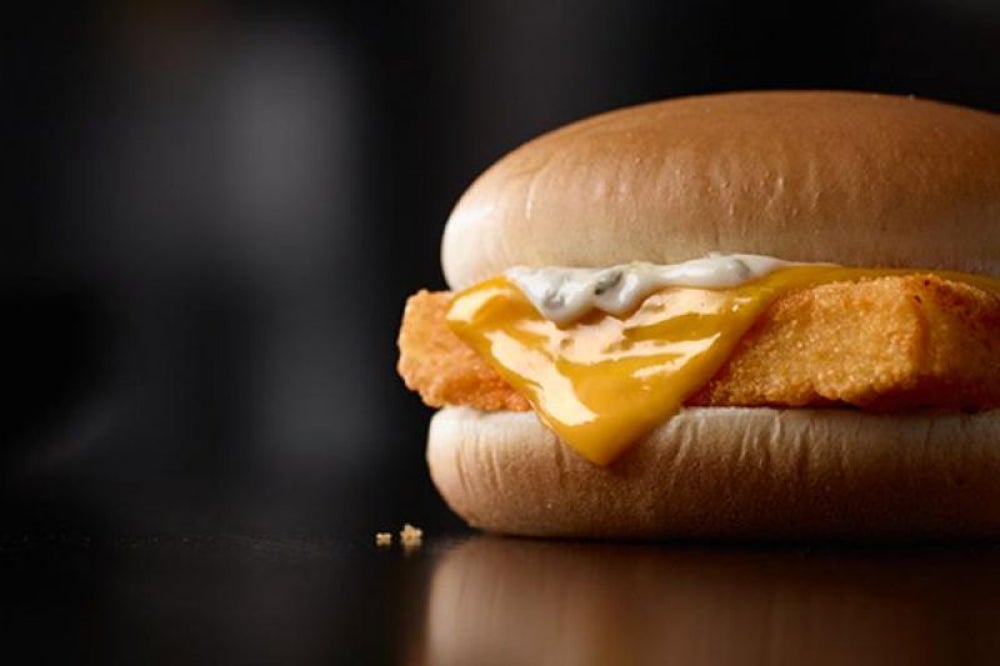 McDonald’s starting selling a Filet-O-Fish in the 1960s when a Cincinnati franchise owner wanted Catholics to be able to eat on Friday at his store during lent.

Today, 25 percent of McDonald’s Filet-O-Fish sales are during lent. 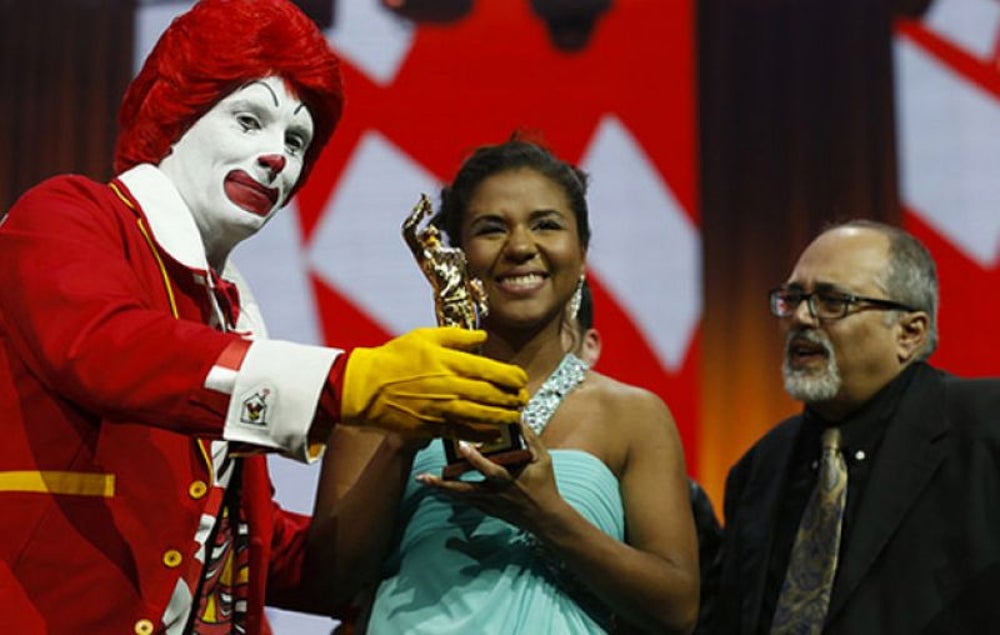 The final competition was judged by big names in music including Grammy Award-winning composer David Foster and Grammy-nominated singer and songwriter Skylar Grey.

The Queen is sort of a McDonald’s franchise owner. 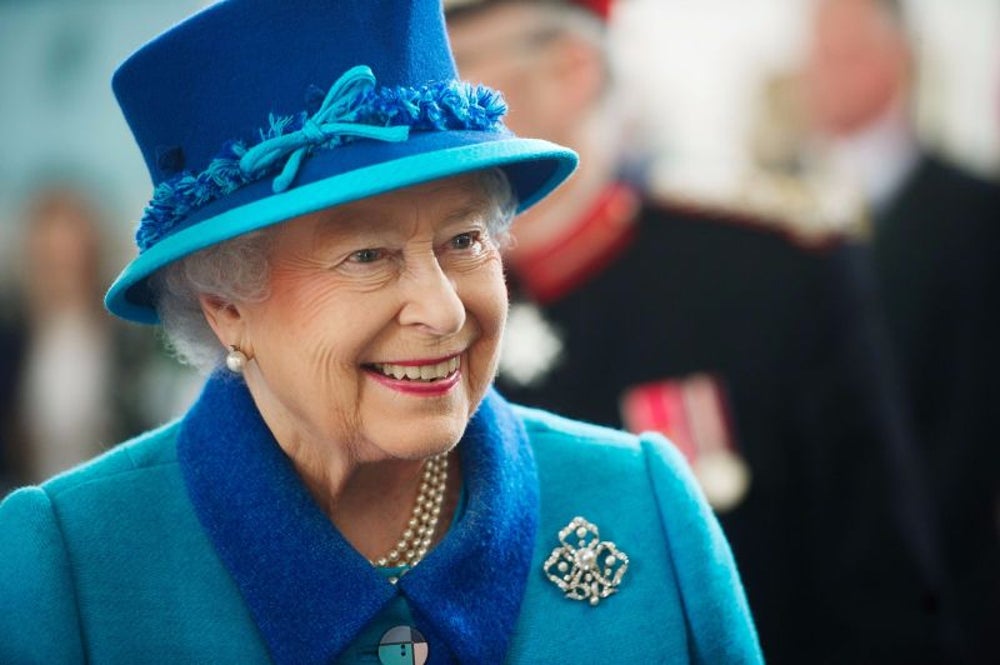 Image credit: Bethany Clarke / Stringer | Getty Images
While you can expect to see castles, hotels and race courses on the Queen’s Crown Estate, turns out, you can also expect a McDonald’s. That’s right, the Queen is technically a franchise owner of a McDonald’s restaurant in Oxfordshire, England, which sits on a small corner of the massive estate.
More from Entrepreneur