The Most Inspirational Moments From the 2016 Olympics

Now that the 2016 summer Olympics has come to an end, we can look back at the monumental moments that impressed and inspired us. From a runner finishing a race with one shoe to Michael Phelps becoming one of the most decorated Olympians of all time, these superhuman athletes had us gasping, crying and laughing at the funny, moving and shocking moments of the worldwide event.

But it’s not only gold medals that make history. Moments of sportsmanship, resilience and talent also mark some of the greatest events during the Games in Rio. Check out the 16 greatest moments from the 2016 Olympics.

An Ethiopian runner qualified for the steeplechase with just one shoe. 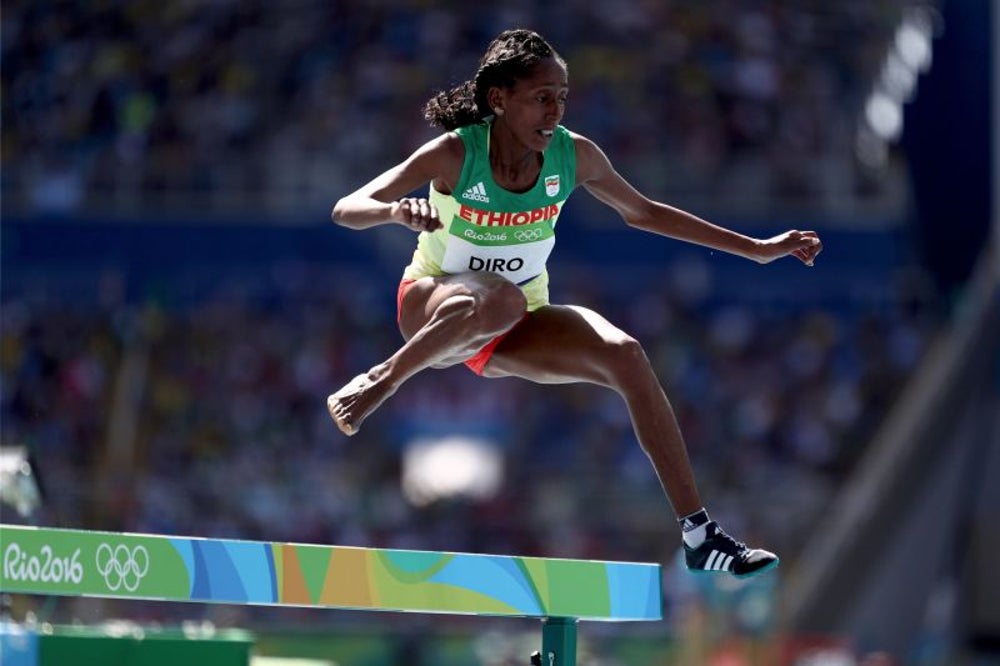 Ethiopian runner Etenesh Diro showed her resilience when she was brought down and forced to race with only one shoe during the Olympic trials on Saturday, Aug. 13. Despite only wearing one shoe, the athlete qualified for the final of the 3,000-meter steeplechase.

Clashing with two other runners, Diro tore off her damaged shoe and continued the race. Ultimately finishing the race 20 seconds slower than her personal best, Olympic officials granted her a special spot for the finals on Monday, in which she placed 14th. 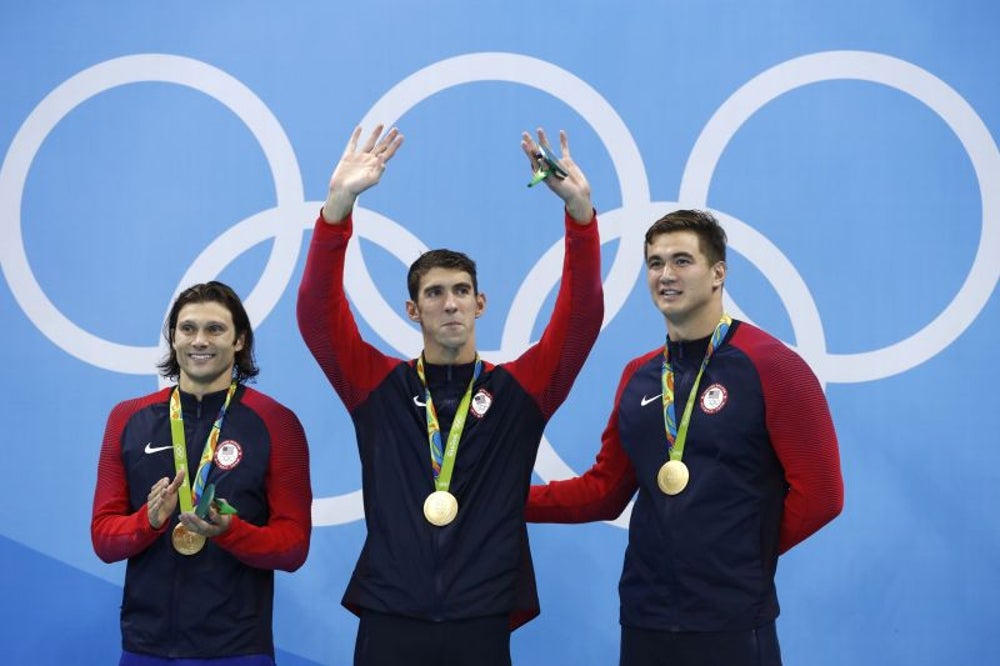 Michael Phelps ended his record-breaking career as the most decorated athlete in Olympic history. Leading the U.S. to victory in the 400-meter medley relay, Phelps retired with his 23rd gold medal -- 28 medals total.

No other Olympic athlete has even exceeded nine gold medals. 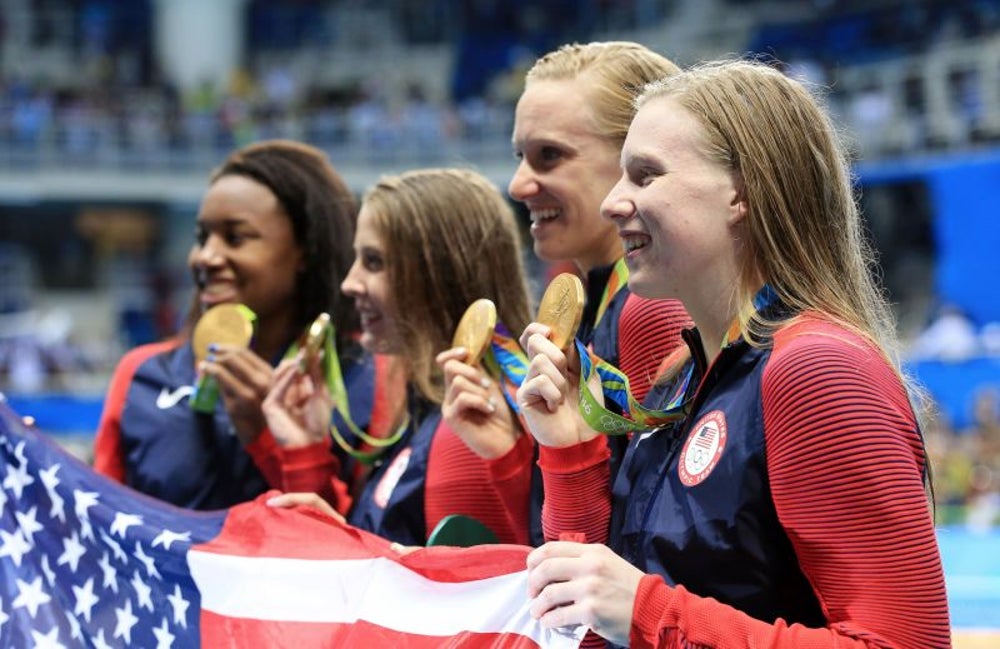 Arriving in Rio with 977 gold medals, the country took the games by storm. Of the 1,000 gold medals, more than half have come from track and field and swimming, reports Reuters. 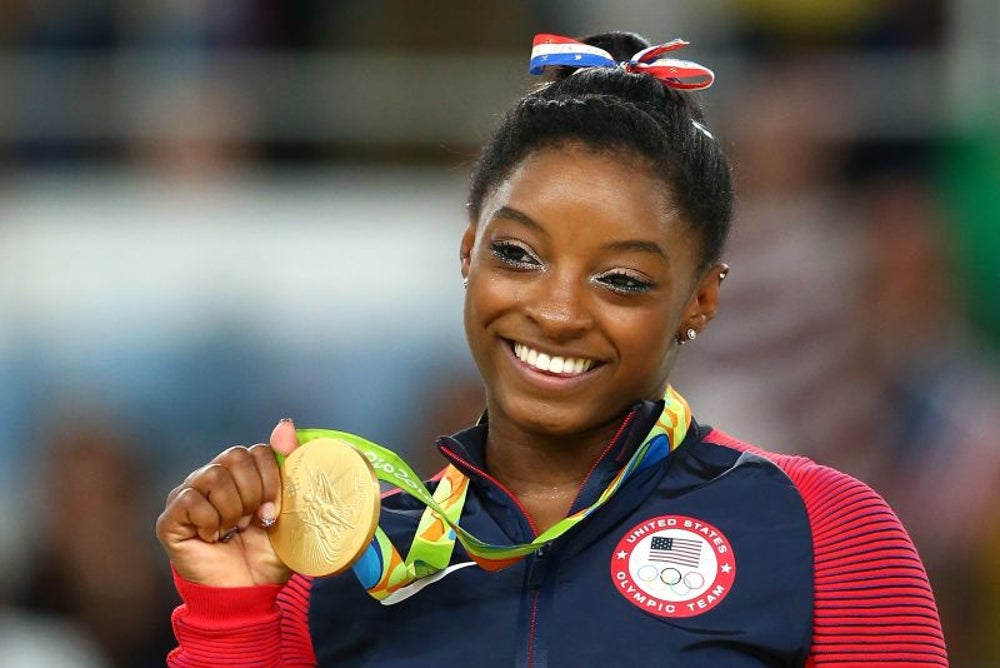 With gravity-defying moves, 19-year-old American Simone Biles has been described as one of the greatest gymnasts ever. As The New York Times describes the Texan teen’s skills as superhuman -- “Jumping higher and twisting more than anyone else in the competition” -- Biles has dominated Olympic gymnastics this year.

Claiming gold titles for women’s individual and team all-around, Biles also received a gold for the vault and a bronze for the beam.

Watch one of her first-place performances here. 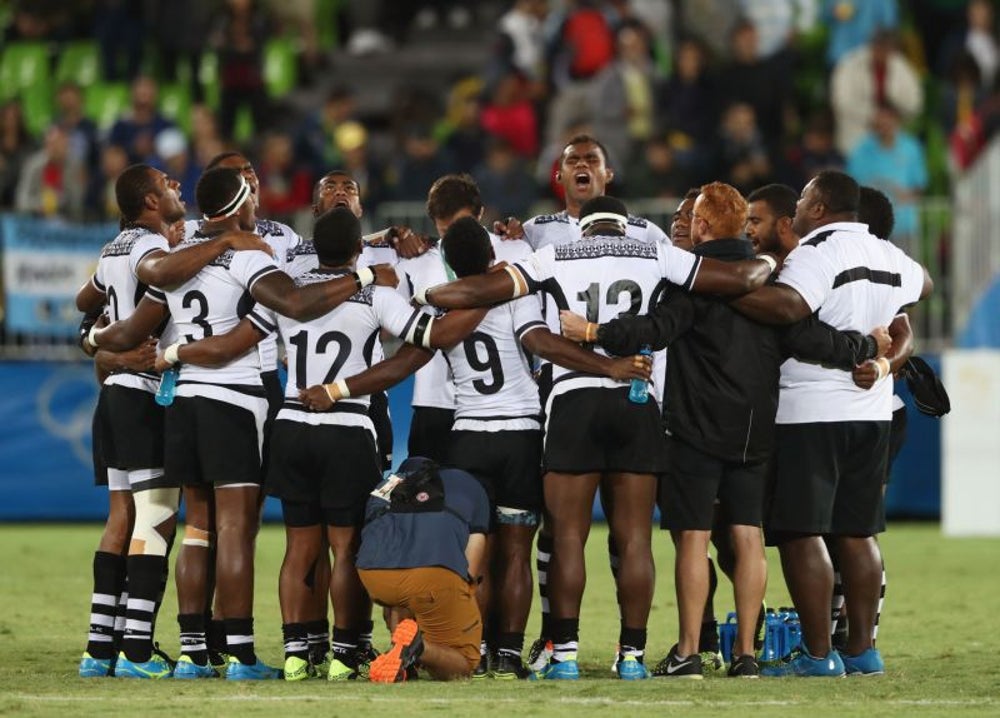 The country erupted in celebration when the Fijian rugby team beat Great Britain with a 43-7 victory on Friday, Aug. 12. The prime minister of the island even declared Aug. 22 -- the day the team will return from Rio de Janeiro -- as a public holiday. Many Fijians are also pushing to make the English rugby coach of the Fiji team, Ben Ryan, an honorary citizen of the country.

A Chinese swimmer didn’t realize she had won the bronze. 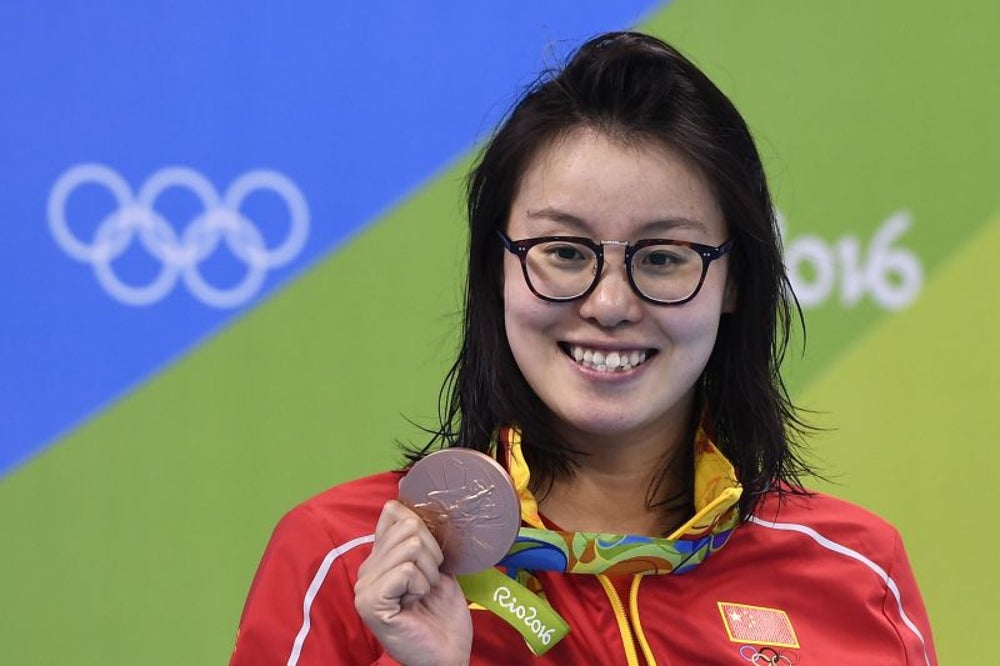 Rather than hopping out of the water in joyous victory, this swimmer had no idea she had placed third in the women’s 100-meter backstroke until a reporter told her.

In the middle of her defeat speech, the bronze medalist, Fu Yuanhui, was interrupted when she’s told of the surprising news. “I came in third?! … In that case, it’s not bad at all!” she replied. Yuanhui’s reaction was caught on film during an interview with China Central Television and she’s quickly become a social media sensation.

A runner dove for gold -- literally. 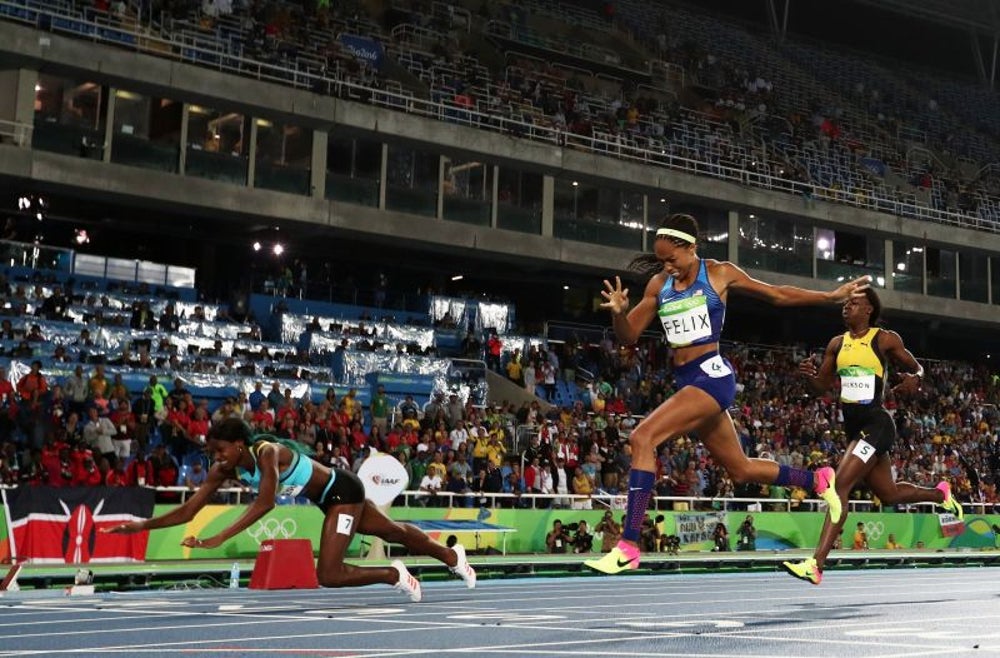 Although it’s not into a pool, diving is still considered legal in Olympic running.

Bahamas runner Shaunae Miller beat seven-time medalist U.S. athlete Allyson Felix when she dove across the finish line during the women’s 400-meter. Giving her the seven-hundredths of a second needed to get the gold, the dive is considered legal, although controversial. According to Olympic rules, “the win is determined by which athlete has any part of their torso cross the finish line.” 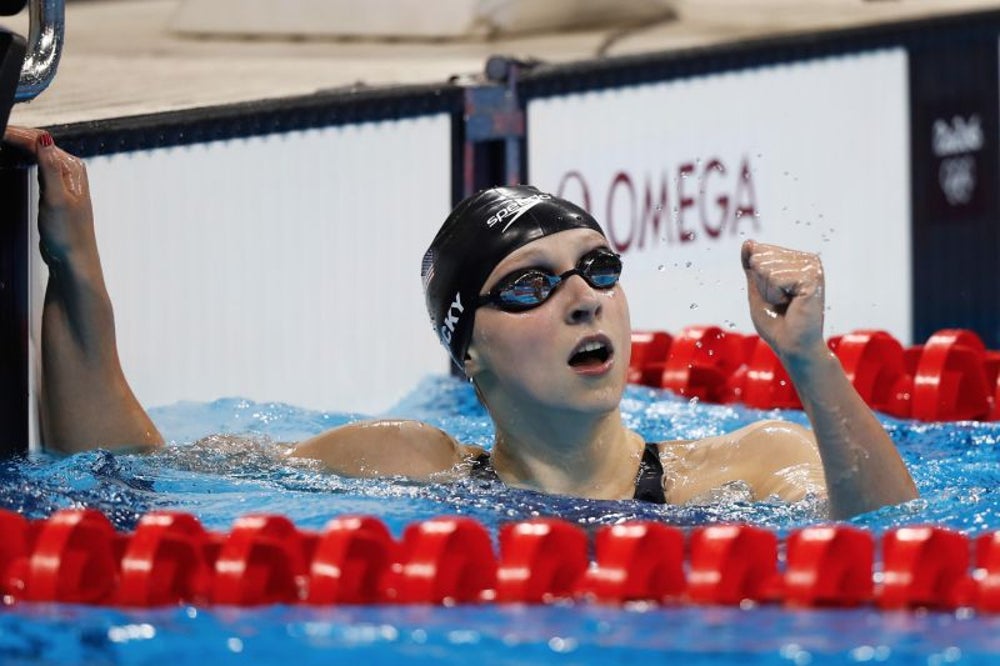 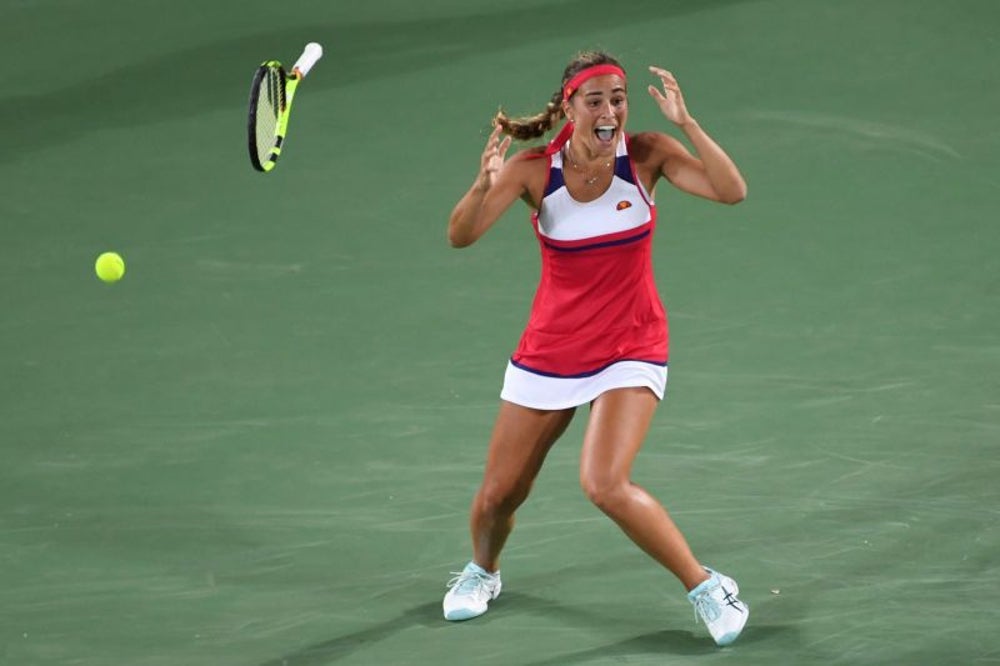 Saturday marked a big day for women in Puerto Rico as tennis player Monica Puig became the first woman in history to take home a medal for the island. But that’s not the only historical takeaway of Puig’s big win -- Puig is also the first person to win a gold representing Puerto Rico.

Shaking with tears of joy from the victory, the tennis player defeated German athlete Angelique Kerber.

Mo Farah defended his 10,000-meter title after a fumble. 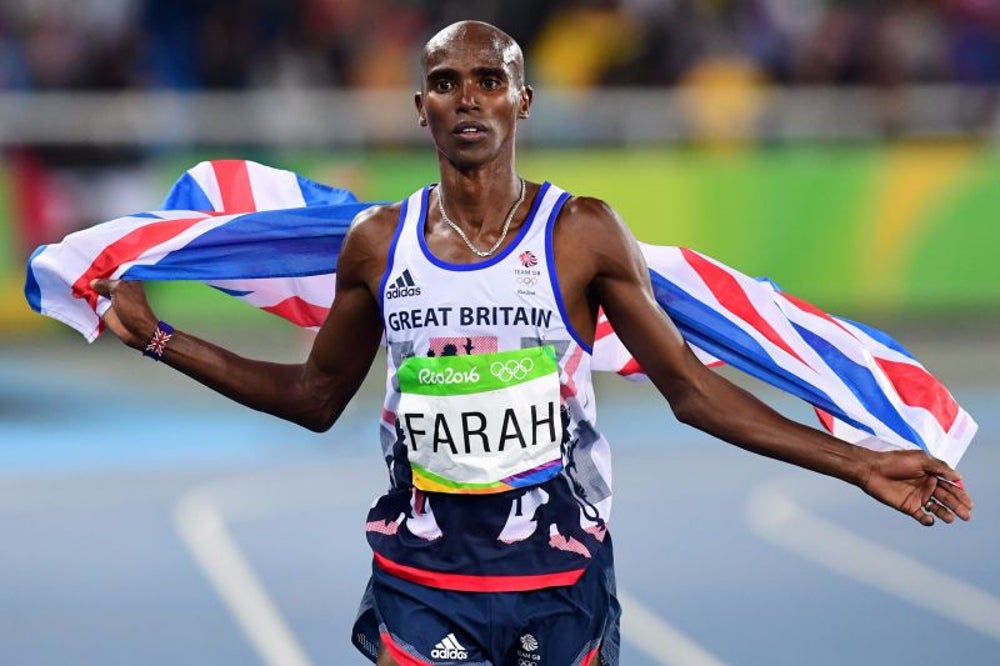 "At one moment, I thought my dream was over, my race was over. I tried to be tough, and that is what I did,” Mo Farah told BBC Radio Five Live.

Fearing his Olympic dreams were in jeopardy, the British runner proved his strength to the world.

Despite getting knocked down in the beginning of the race, Britain’s most successful track and field star and three-time medalist rose back up, catching up to lead the other competitors and ultimately sprint to the finish line to win the gold.

The king and queen of the track Jason Kenny and Laura Triott won gold. 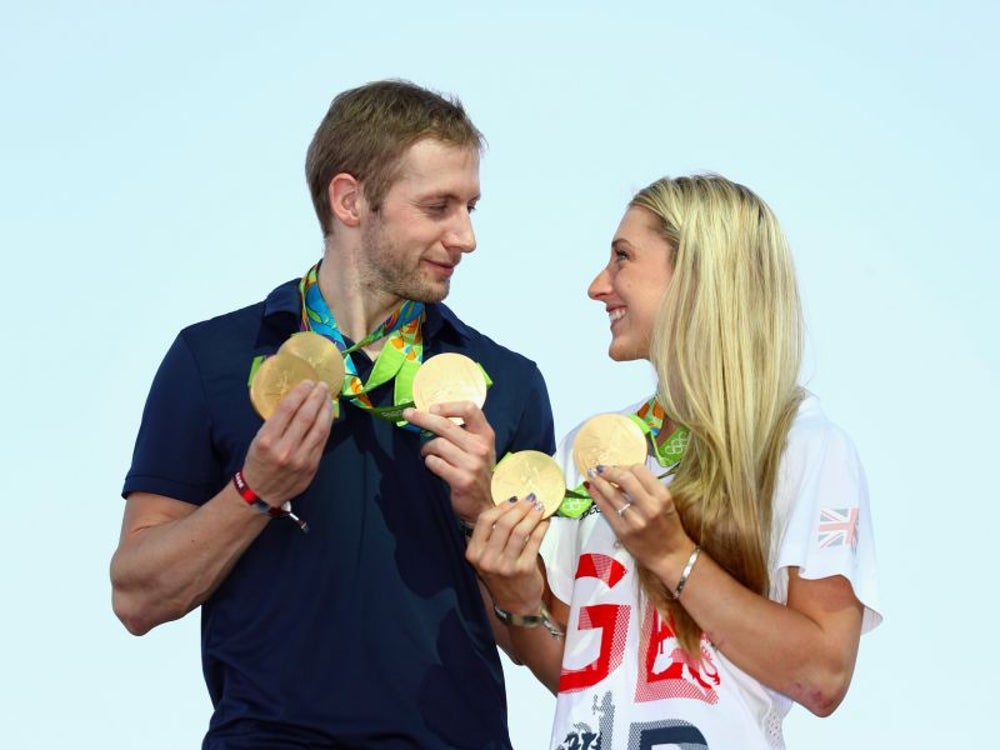 British cyclists Jason Kenny and fiancee Laura Triott took the Rio Games by storm. The king and queen of the track -- who plan to get married next month -- won five gold medals as well as set multiple world records.

Trott took the title of the most successful female British Olympian by adding an additional two gold medals atop the two she’d previously won in the London Games. Kenny added three new gold medals to his collection.

Kosovo has successful debut at the Olympics. 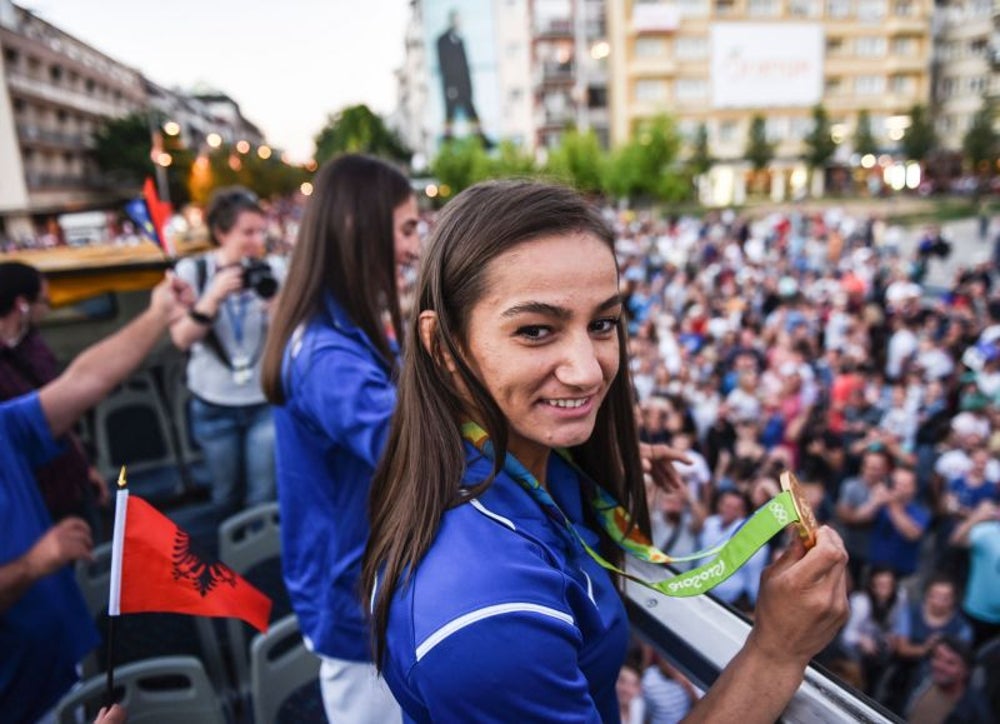 Image credit: Armend Nimeni, Stringer | Getty Images
Kosovo -- located in southeast Europe -- made its debut at the Rio Olympics. Right away, the small country proved its worth to the world as Majilnda Kelmendi defeated Italy's Odette Giuffrida in women’s 52 kg judo. 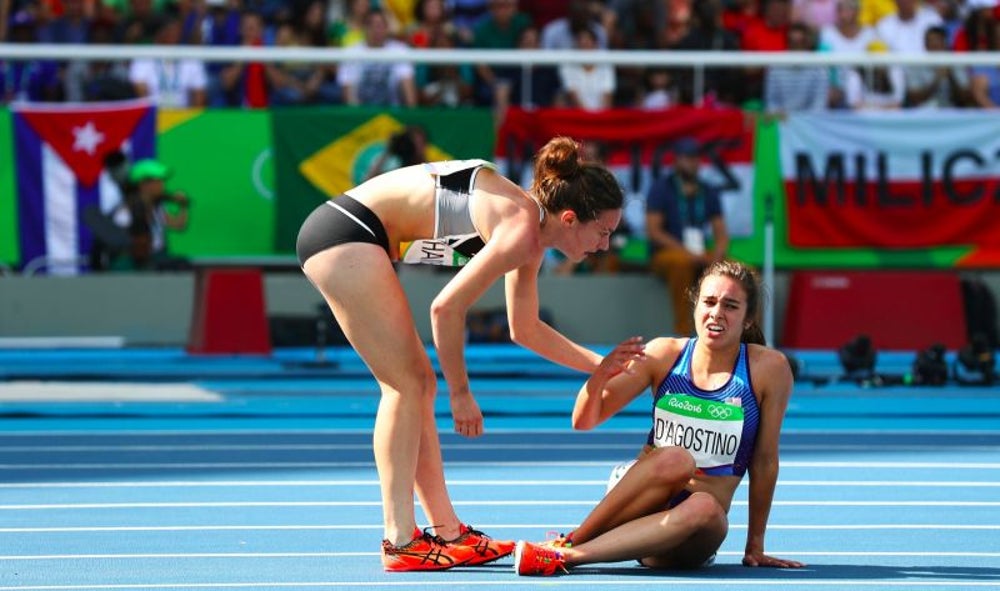 After Hamblin’s initial tumble, she accidentally brought D’Agostino down with her.

After getting up, D’Agostino offered her competitor a hand up. The fall injured D’Agostino and she later collapsed again. This time, Hamblin was there with a helping hand.

Each giving up their chances for a medal to help the other, the women were awarded International Fair Play Committee Awards, which has only been given to 17 athletes before them. 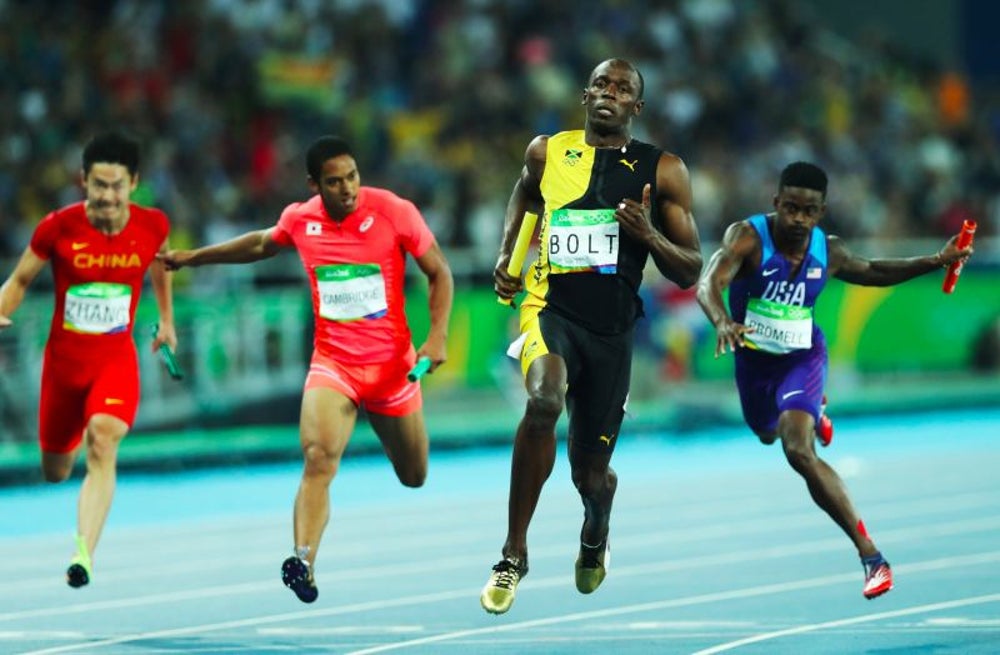 The Jamaican star -- also recognized as the fastest man alive -- finished up his career with a golden win as the anchor for the Jamaican track and field team in the 4x100-meter medley.

His lightening speed drove Bolt to becoming the most decorated Olympic sprinter in history, with nine gold medals from the 2008, 2012 and 2016 Games.

Allyson Felix dropped the baton, but the U.S. team rose back up. 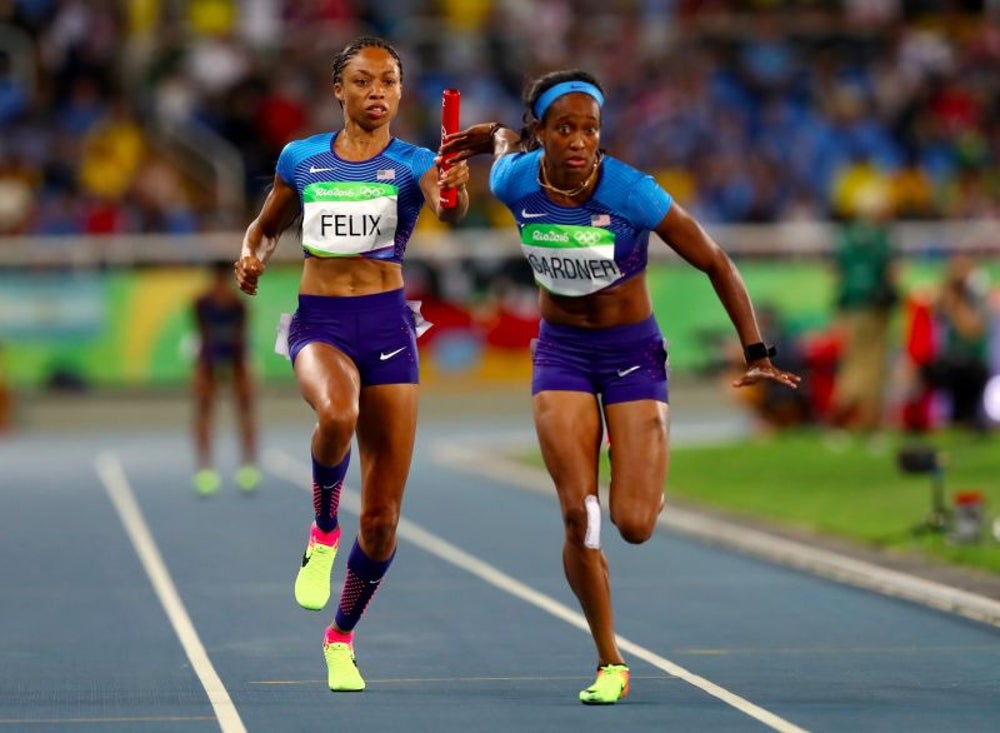 U.S. runner Allyson Felix dropped the baton in the 4x100 meter race after being bumped by a Brazilian competitor. Initially, the drop disqualified the U.S. girl’s team to move into the finals.

But after a successful petition for protest filed by the U.S. Olympic Committee, the team moved onto the finals and ultimately took the gold. 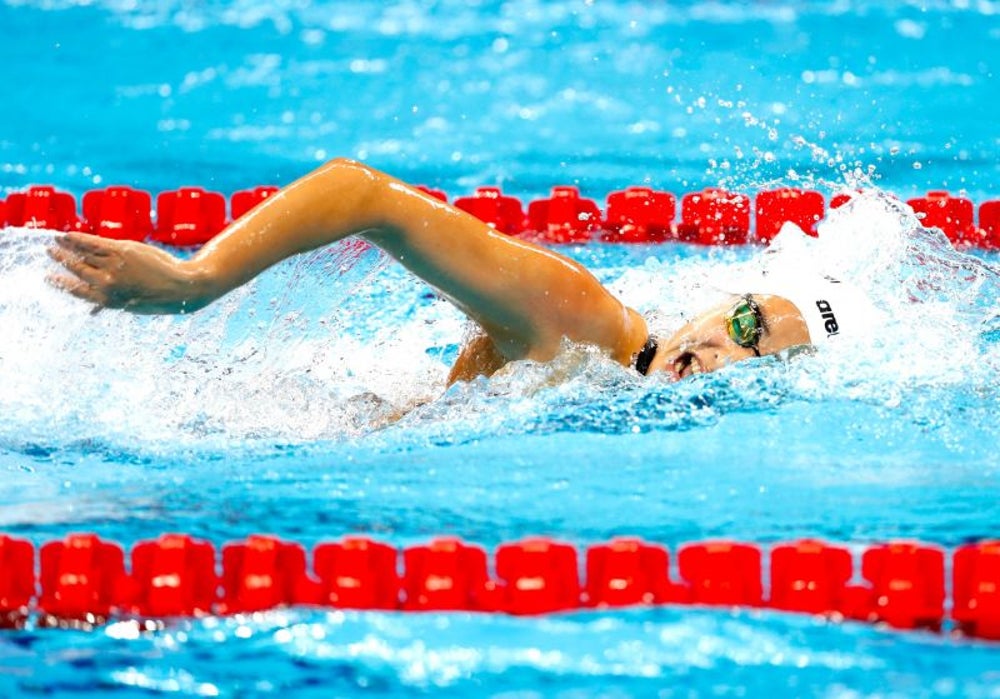 The first-ever refugee team made its debut at the 2016 Games. On the team, 18-year-old swimmer Yusra Mardini -- who fled Syria in 2015 -- showed the world her perseverance.

Although she didn’t qualify for the semifinals for either freestyle or the butterfly, Mardini’s story is touching.

When she fled Syria with her sister in 2015, Mardini -- as one of the strongest swimmers on board -- saved the lives of her fellow refugees on the boat by pushing their flooded and overcrowded dinghy through the Mediterranean Sea. "It was quite hard to think that you are a swimmer, and you are gonna end up dying in the water,” Mardini told reporters.

Despite not qualifying, Mardini inspires hope for oppressed people worldwide. “I want to show everyone that after the pain, after the storm, comes calm days,” she said.
More from Entrepreneur

Lyin' Lochte Is Stripped of His Speedo. I Can Relate.

Confidence Is the Game-Changer for Winning Big