Did Your Customers Get Tattoos of Your Logo? These Did.

Some diehard fans take their brand loyalty to the next level.
Next Article

Would you get inked for your favorite brand? You’d be surprised how many people actually answer “yes.”

For many people, having a brand’s logo tattooed on them is an embodiment of the impact that company has made on their lives. For others, these logo tattoos are just for “fun.”

Check out these 10 companies who have inspired customers to get inked. 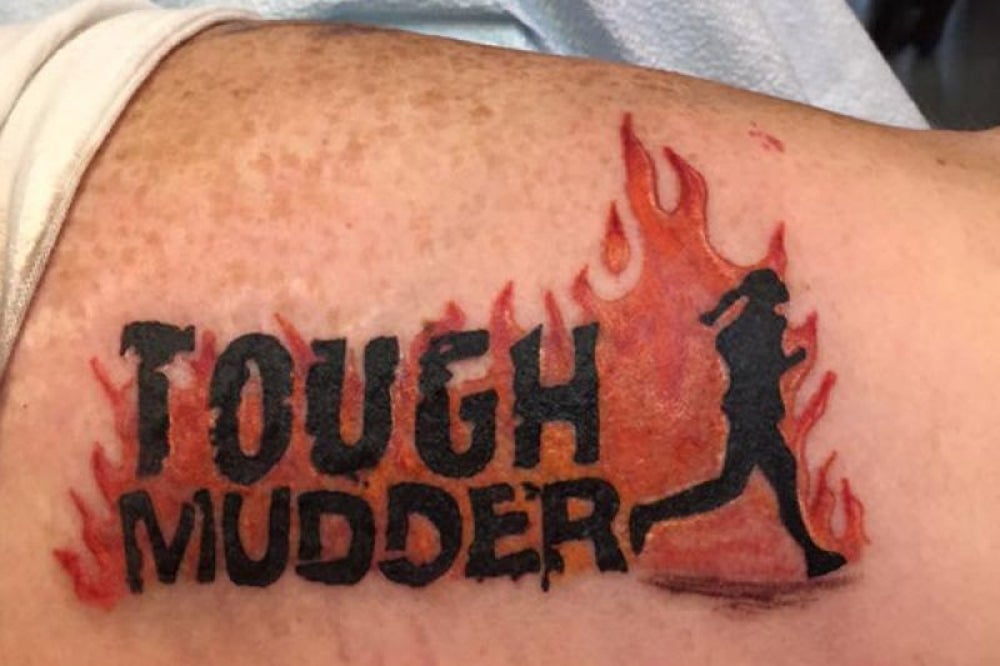 It’s not uncommon for a diehard Tough Mudder competitor -- or even just a fan -- to get inked with the logo.

Tough Mudder encourages it. After someone gets the logo tattooed, he or she is instructed to submit a copy of the receipt so they can be awarded free entry to the next Tough Mudder competition. 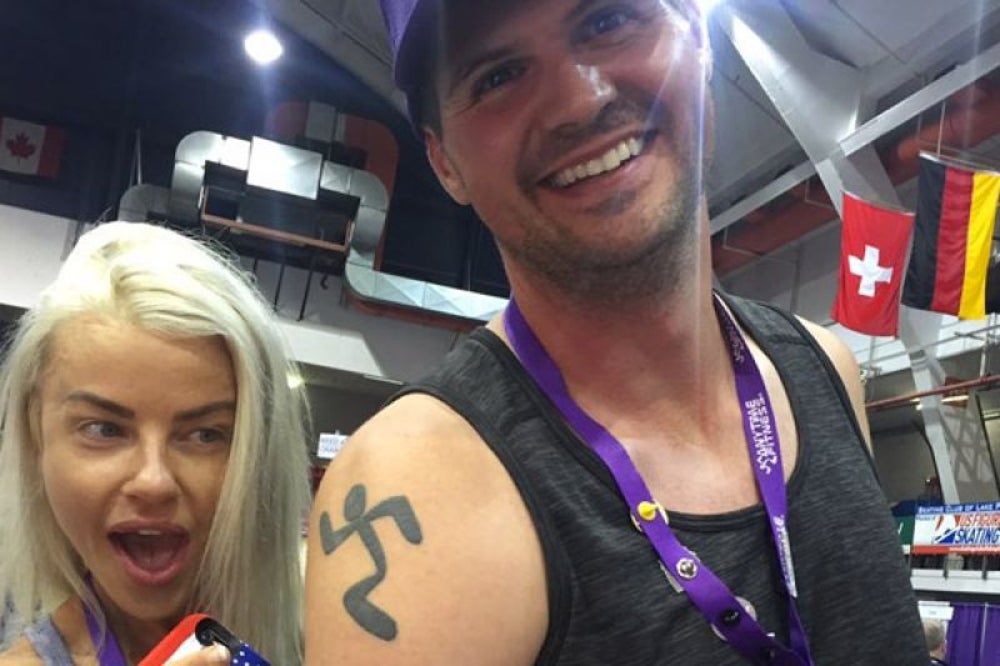 Much like Tough Mudder, 24-hour fitness franchise Anytime Fitness encourages and reimburses customers who brand their bodies with the “running man” logo. But to Anytime Fitness and its brand evangelists, the tattoo is more than just a logo -- it’s a symbol of their “Anytime Story,” a time when they overcame an obstacle or reached a goal.

Since May of this year, more than 3,000 people got Anytime Fitness tattoos. 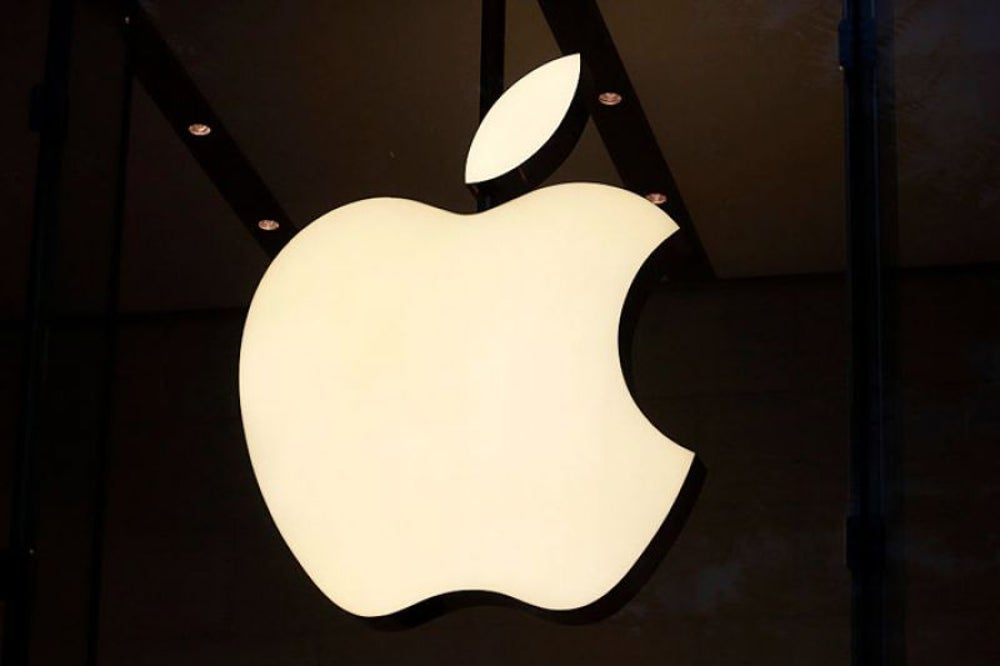 Even though Apple is one of the most popular brands ever, it’s still surprising to see how many people take their loyalty a step further.

One loyal fan says he got his Apple tattoo in honor of his wife -- because they shared the same anniversary date as Apple's founding.

The Virgin Mary and her sacred Apple tattoo by Sweety
Follow @sweetytattoo to see more of… https://t.co/2MbJxDNq3x pic.twitter.com/UIosMgUKCW

Others -- well -- they must simply love Apple, getting tattoos ranging from the company’s early rainbow-filled logo to MacBook power buttons. Check some out here. 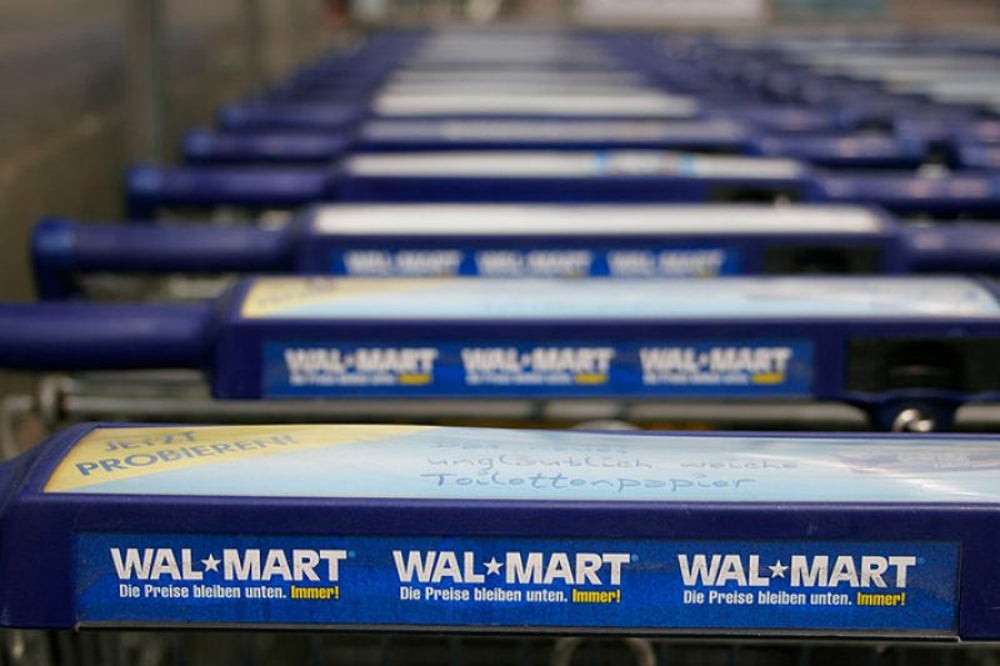 Apparently, Wal-Mart has a few diehard fans too.

The “Save Money. Live Better.” motto must have really spoken to these customers -- at least enough to convince them that a tattoo was in order.

If Trump's brand was the sum of all his voters it'd be this Wal Mart tattoo. pic.twitter.com/EeAkCK8Xbx 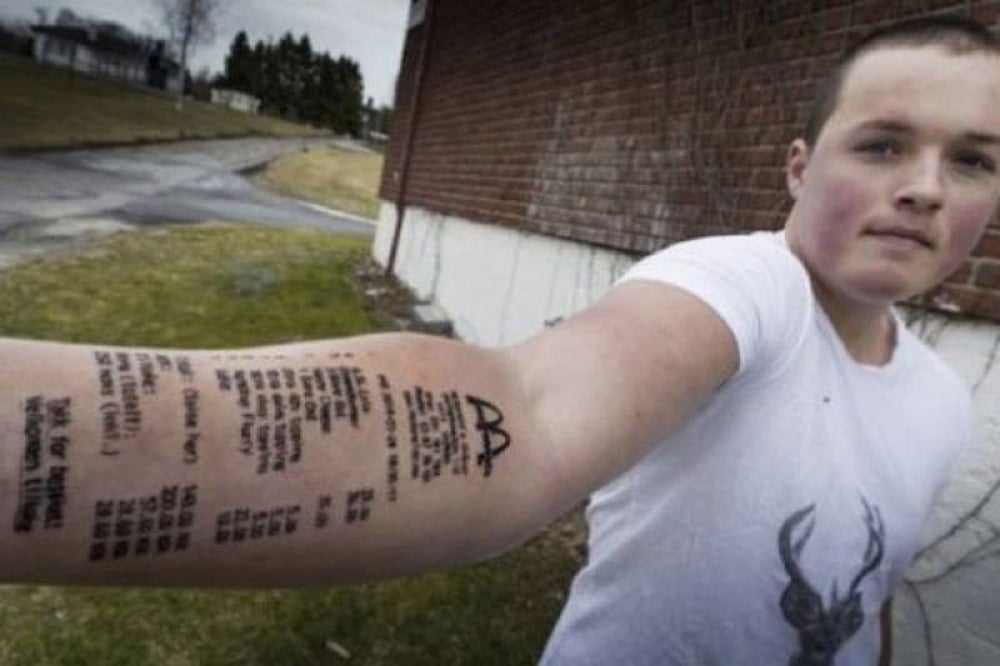 These people must really be lovin’ it.

From golden arches to happy meals -- McDonald’s fans get pretty crafty with their tattoos. 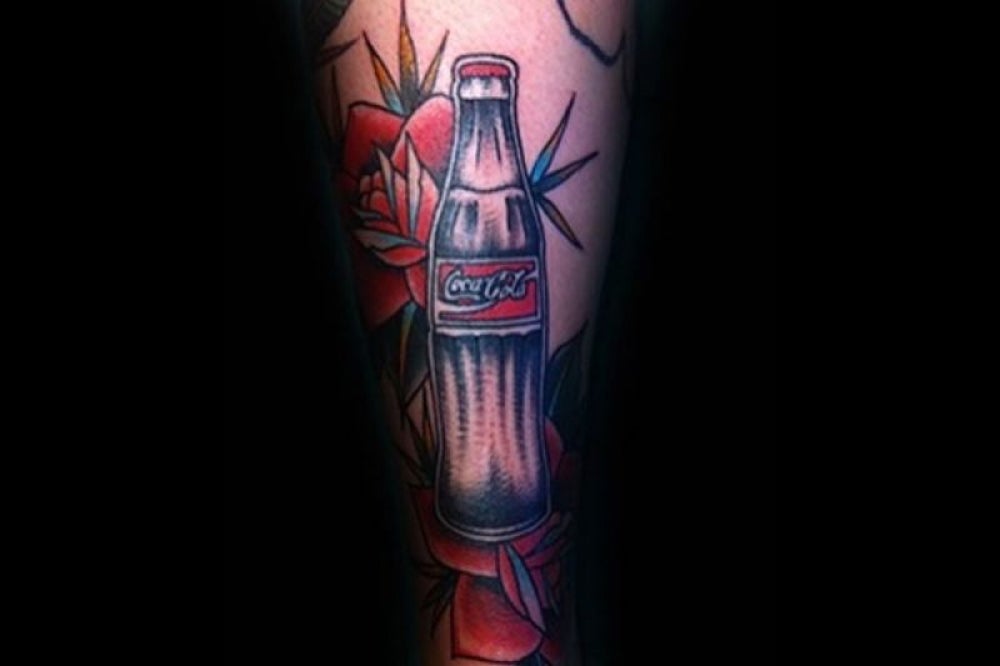 Since its bubbly beginnings in 1886, the refreshing beverage brand took the world by storm. It hasn’t lost momentum since. A number of people get the long-lived Coca-cola logo tattooed on their bodies -- but to many it’s more than just a “logo,” it’s a fashion statement. 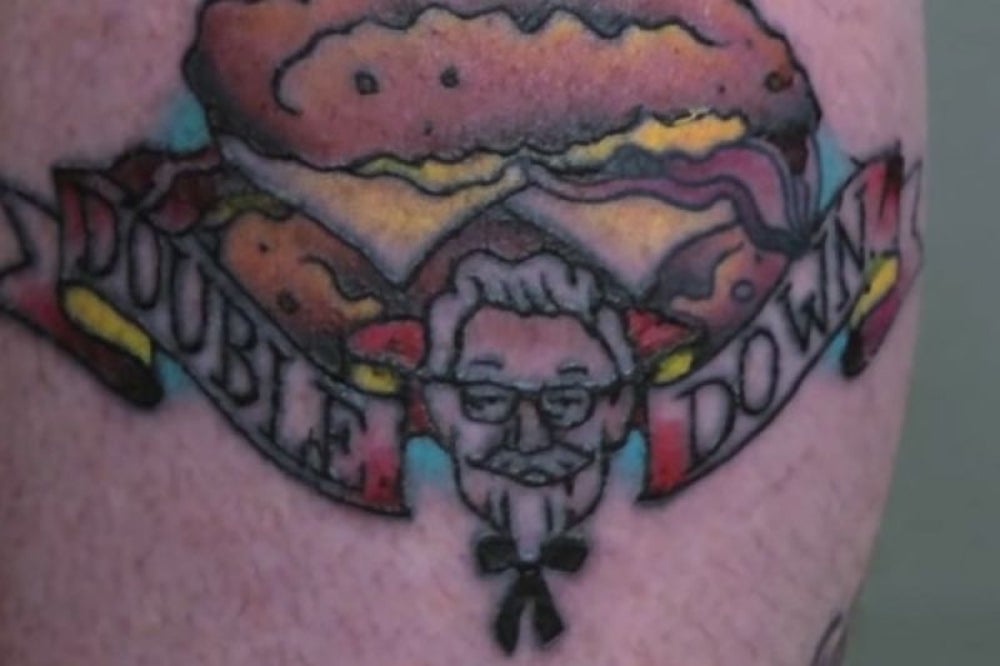 That “Finger Lickin’ Goodness” is irresistible to some customers, so much so that they decided to get it stamped on their bodies forever.

One superfan even agreed to get a KFC Double Down sandwich tattooed on his leg for a commercial. Referred to by KFC as the “Ultimate KFC Double Down Fan,” the unnamed man reminisces about the first time he tried the sandwich while on the first date with his girlfriend. “I guess that’s how it all started,” he says in the video. 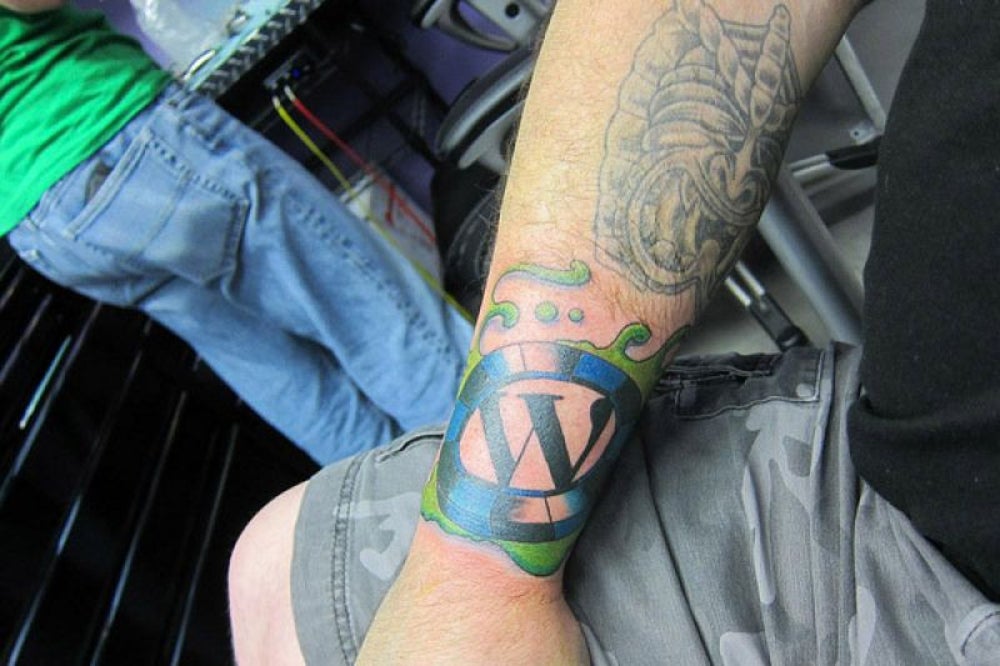 For Jeff Matson, Wordpress is more than just a web platform: “Wordpress is a way of life,” he states on his blog. Matson says that Wordpress changed his life and taught him that he can do, create and be anything. Wordpress won’t live on forever, Matson says, which is why he got something to remind him of it.

Matson’s not the only one who feels this way about Wordpress either. Check out Wordpress’ fan art page for a list of other customers who got the “W” logo inked on their bodies.

This Tattoo Artist Fell in Love With the Art When He Was 16. Here's How He Made a Career Out of It.

Do You Let Employees Show Their Tattoos? Starbucks Doesn't - But That May Change.