This year is full of big names -- and they've got a lot to say to the graduating classes of 2017.
Next Article

It’s graduation time, and that means before a whole new crop of people join the workforce, they receive inspiring farewells from some of the most successful leaders, celebrities and politicians.

Related: Watch Will Ferrell Joke, Sing and Inspire During His 2017 Commencement Speech

From President Donald Trump to Sheryl Sandberg to Will Ferrell, this year’s commencement speeches are full of big names. And they’ve each got a lot to share with the 2017 graduating classes.

Check out the most inspiring quotes from some of the best commencement speakers this year. 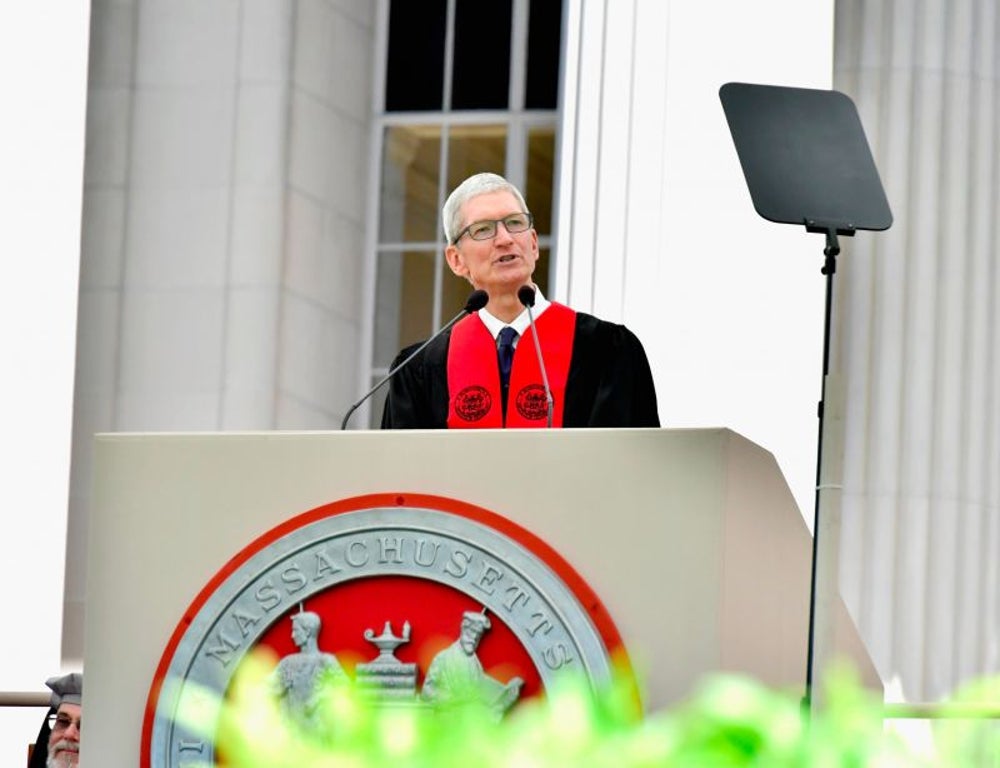 “When you work toward something greater than yourself, you find meaning, you find purpose. So the question I hope you will carry forward from here is, how will you serve humanity?”

Apple CEO Tim Cook delivered the commencement speech to MIT’s 2017 graduating class on May 9. During his speech, Cook urged the graduating seniors to seek direction and purpose and to figure out how they can better serve humanity. Cook recalls events from his own life such as working with Steve Jobs and meeting with Pope Francis as examples of people who put others at the center of what they do in order to create a better world. 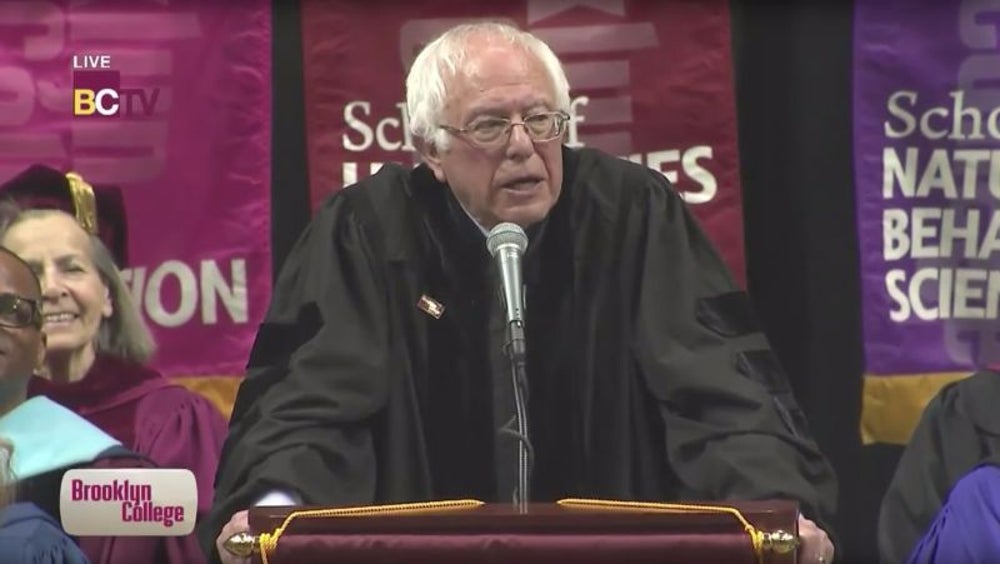 “My message to you is very simple: think big, not small, and help us create the nation that we all know we can become.” 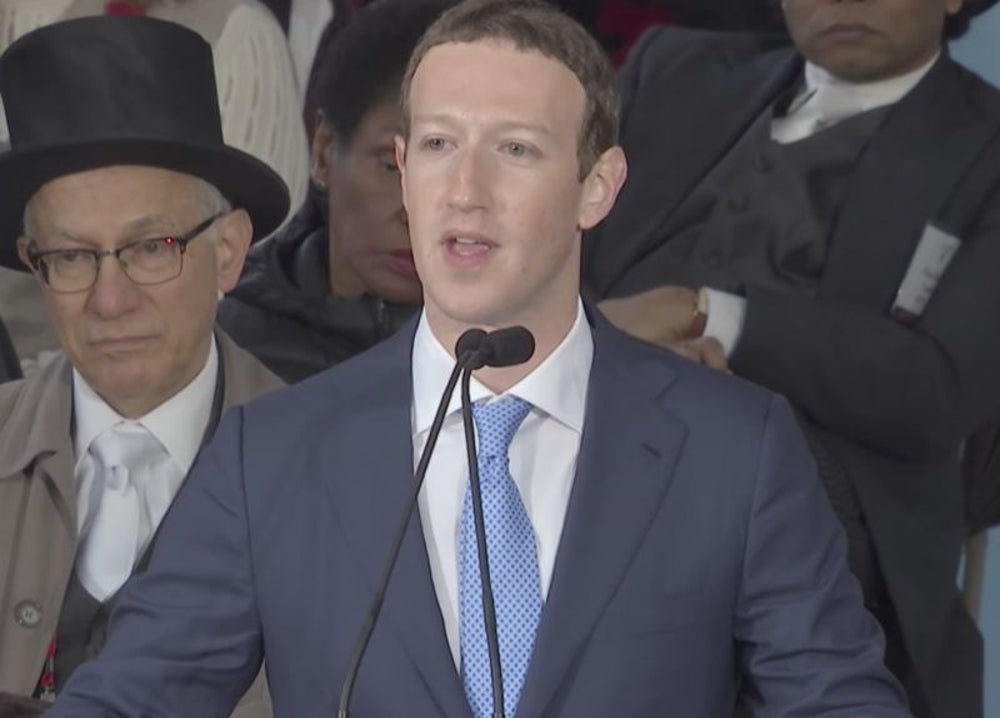 Facebook’s Mark Zuckerberg took the stage on May 25 to give Harvard’s 2017 commencement speech. As the most highly anticipated graduation speech of the season, Zuck touched on a number of topics, shared stories from his life and encouraged students to promote community and give back. However, his primary message to students was: Have a sense of purpose. 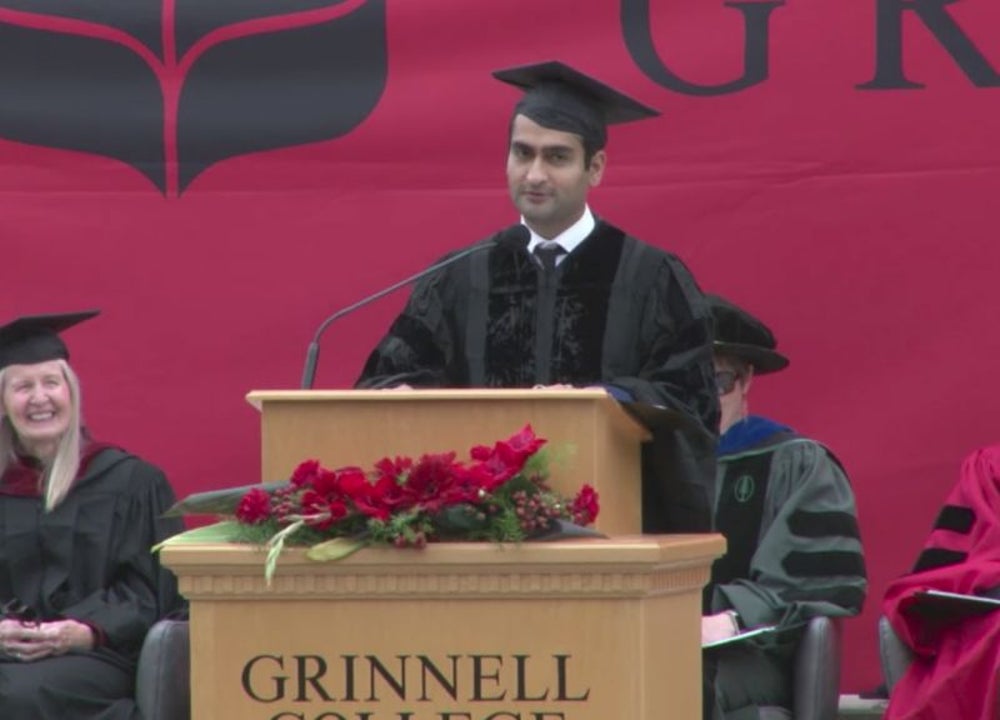 “You can go slow. Allow your dreams and goals to change, but live an intentional life.”

Silicon Valley star Kumail Nanjiani gave this year’s commencement speech at his alma mater, Grinnell College. Having grown up in Pakistan and moved to the states to attend college, Nanjiani shared his story with the students. Touching upon failure, diversity, personal growth and more, Nanjiani inspired the students to live life to the fullest. 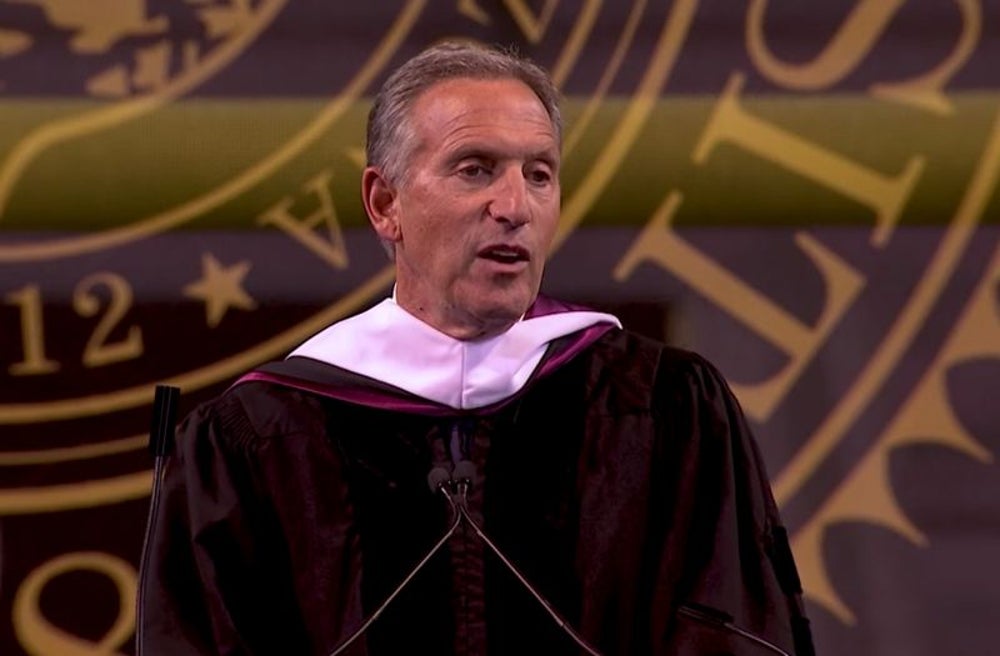 “Summon your compassion, your curiosity, your empathy towards others and your commitment to service. Give more than you receive and I promise you, it will come back to you in ways you can't possibly imagine.”

At Arizona State University, the former Starbucks CEO shared his personal story of going from public housing to international success. He explained how he has built a business not only based on profits, but on values and humility. He encourages others to do so too. 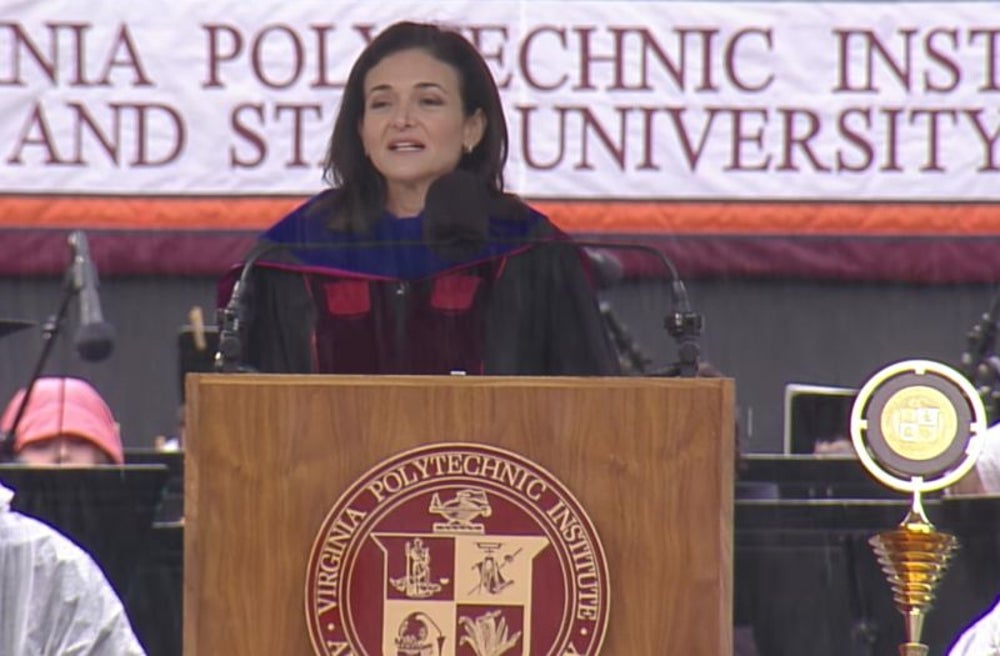 “Build resilience in yourselves. When tragedy or disappointment strike, know that you have the ability to get through absolutely anything.”

Facebook COO and founder of LeanIn.org recalled how she dealt with her own personal tragedies and how they helped her become stronger than ever. During her commencement speech at Virginia Tech, she encouraged others to learn and grown from these moments too.

Related: Sheryl Sandberg Reflects on Her Husband's Death and How She Bounced Back 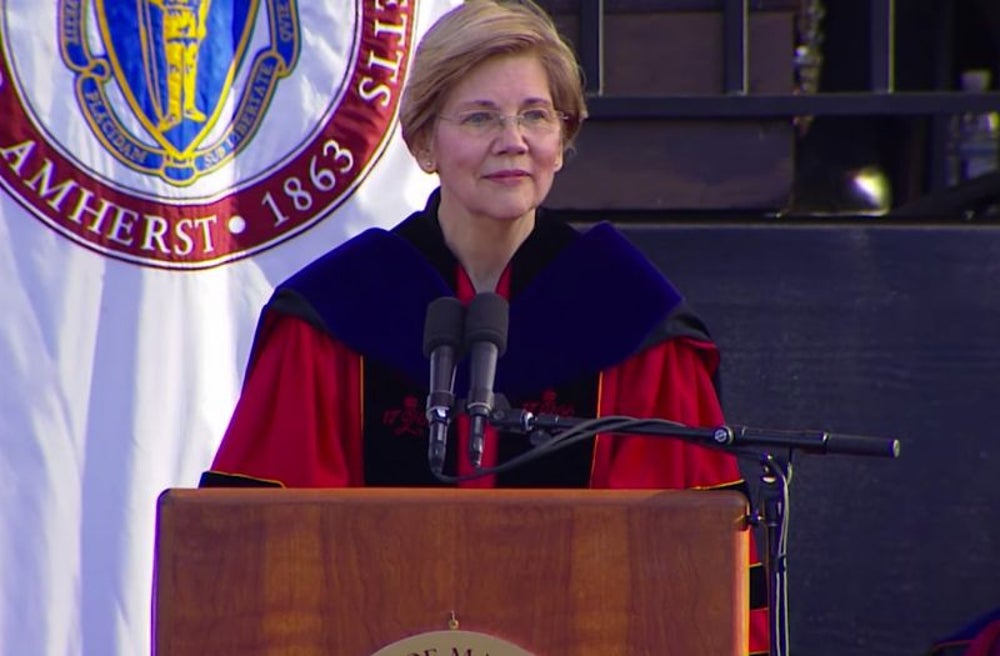 “No matter what other work you do, every day, if you find the issues that matter to you and you get in the fight, you will build a life with more heart flutters and fewer don’t-make-me-move moments.”

In her commencement speech at UMass Amherst, Elizabeth Warren shared a passionate and political speech, encouraging graduates to take control of their future and become a part of shaping it. She wants everyone to get involved in something they believe in. 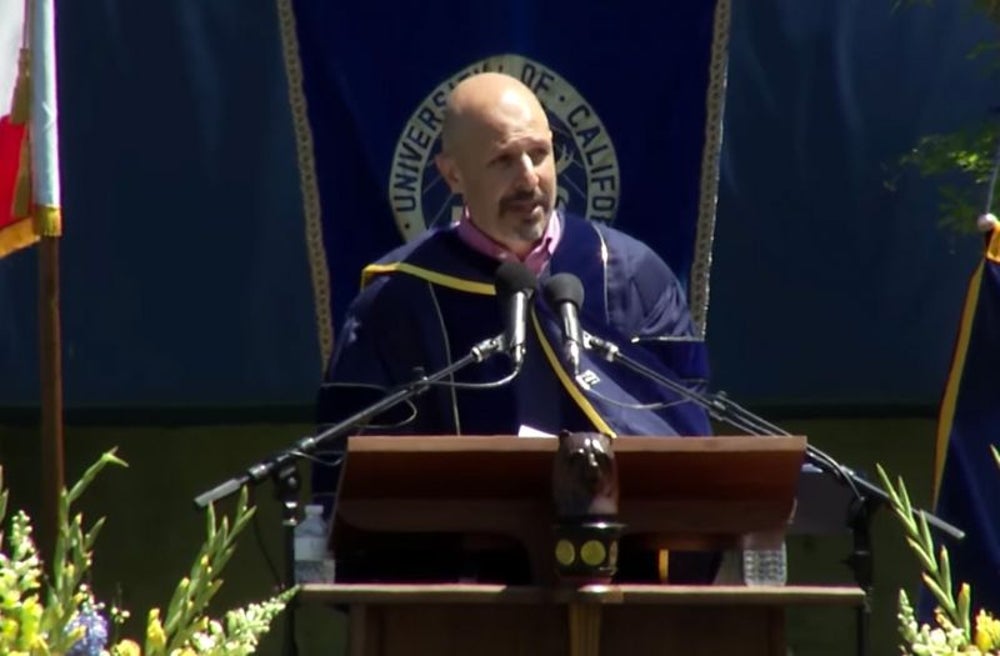 “Create. Don’t wait around for people to give you things to do. If you’re a writer, write; artist, paint; builder, build! Opportunities will come to you if you create them.”

Comedian Maz Jobrani told the graduating class at University of California Berkeley about the importance of pursuing your dreams and doing what you love. He left five tips for the students on giving back, doing what you love, taking a hold of your future and more. 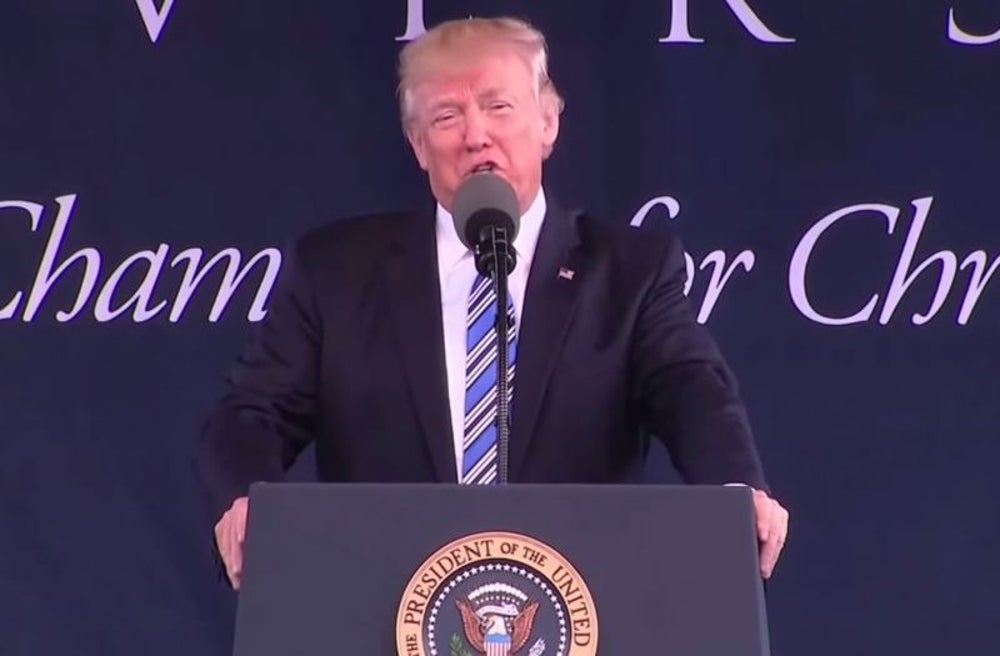 “The more people tell you it's not possible, that it can't be done, the more you should be absolutely determined to prove them wrong. Treat the word 'impossible' as nothing more than motivation.”

President Donald Trump gave a powerful commencement speech at Liberty University. Regardless of what people say, Trump encouraged the graduates to follow their dreams and never give up. 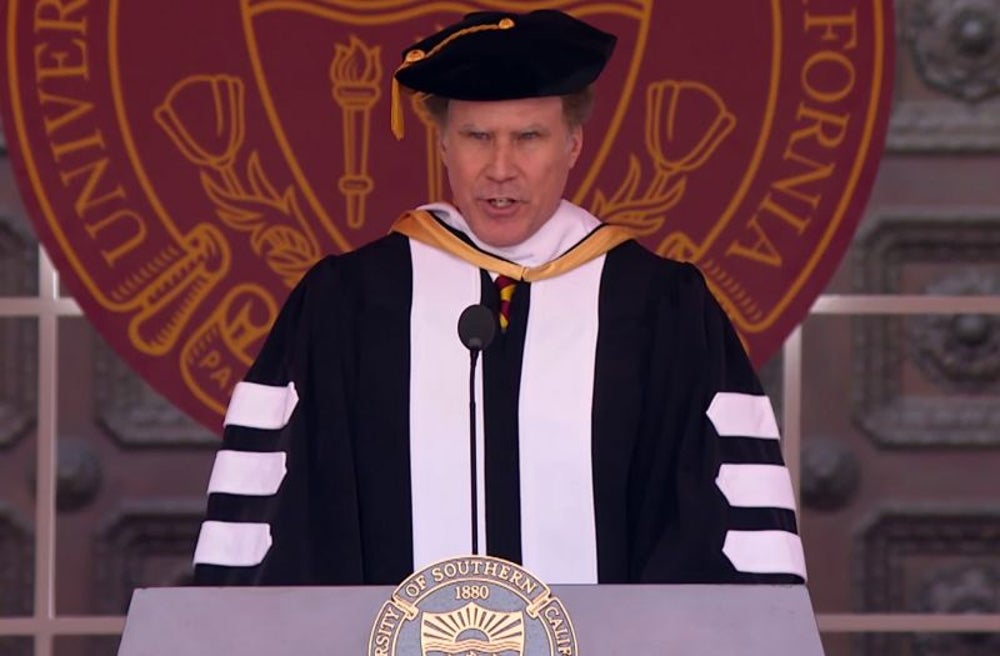 “No matter how cliché it may sound, you will never truly be successful until you learn to give beyond yourself. Empathy and kindness are the true signs of emotional intelligence.”

From joking to singing, comedian and actor Will Ferrell gave an inspiring speech at the University of Southern California. Sharing his story and how he pursued his dreams, Ferrell encourages the graduating class to do the same. He also motivates them to stay humble, appreciate what you have and give back. 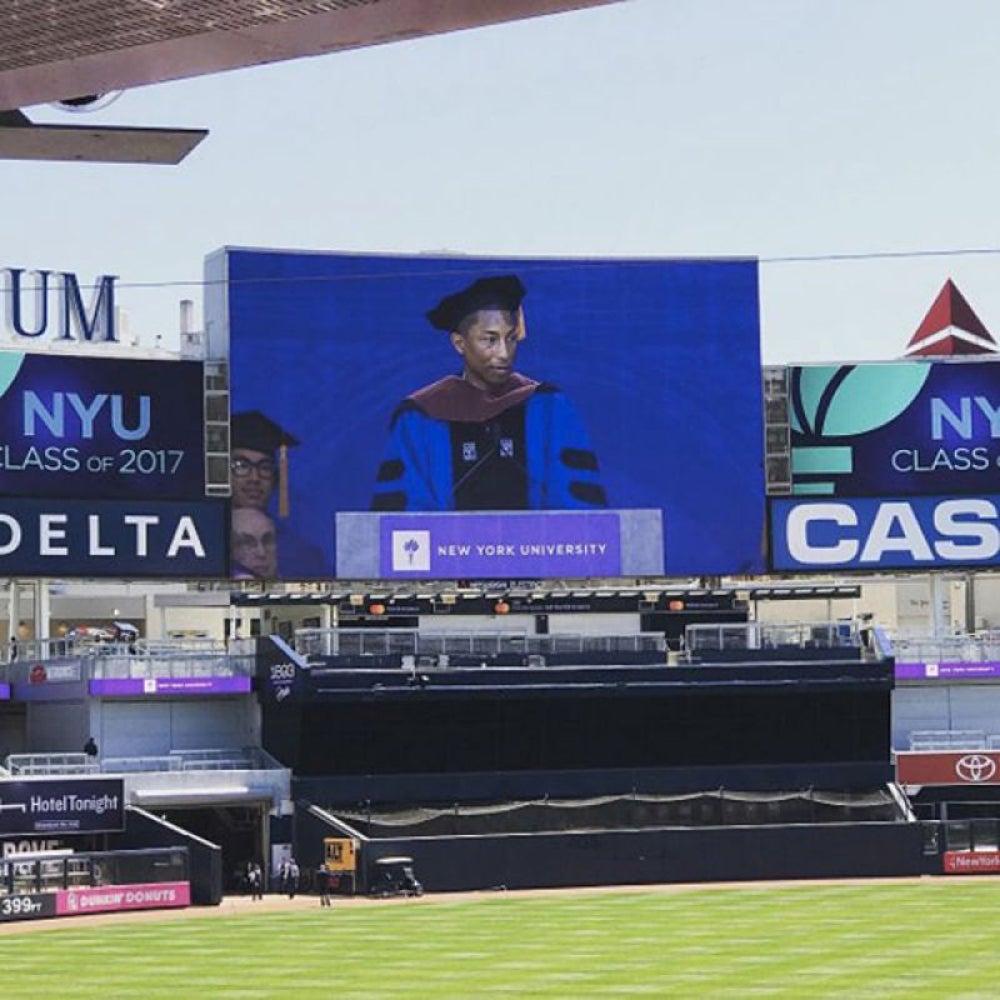 “Engage and inspire -- whether on an individual level or loudly within your communities. Talk about your accomplishments. Be humble, but not too humble. Don't be invisible.”

Singer-songwriter and entrepreneur Pharrell Williams gave New York University’s 2017 commencement speech, encouraging the graduating class to give back to the world, promote equality and keep on learning. Williams praised higher education and sought to inspire the students to seize opportunities. 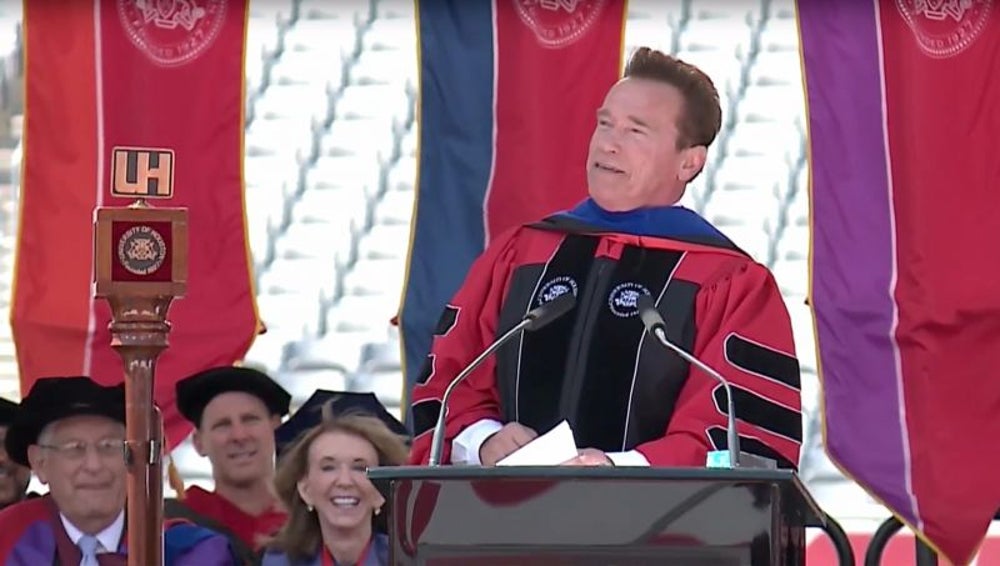 Real estate mogul, bodybuilder, actor, former governor of California, Arnold Schwarzenegger gave an inspirational speech to the graduating class of University of Houston. Schwarzenegger shared stories from his life and how he got to where he is today with the help of others and by not listening to any negative voices. He encouraged the students to do the same. 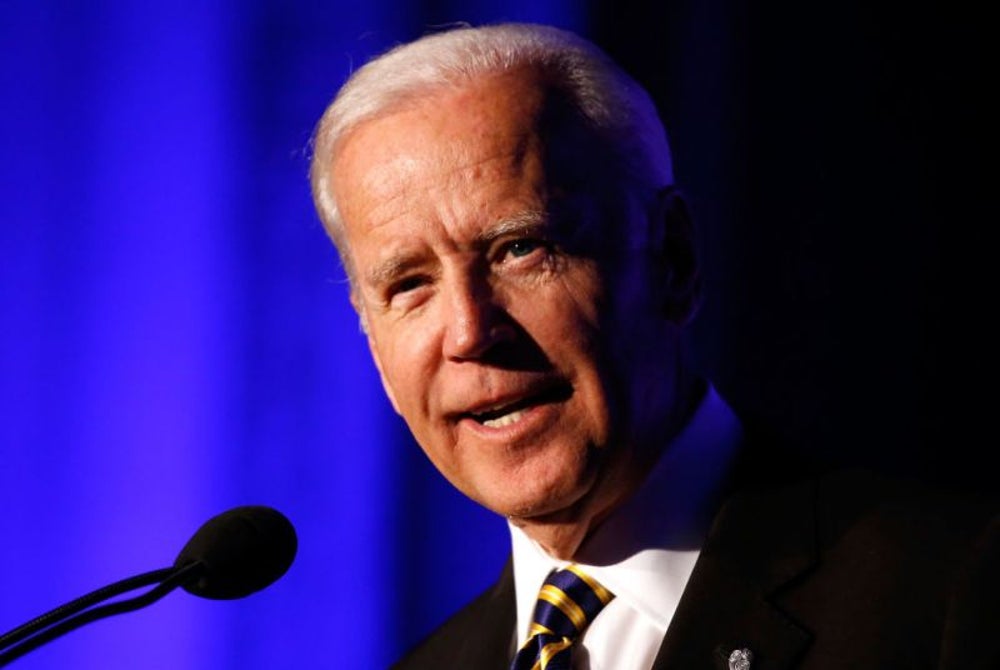 “There's always new challenges ahead, challenges that make it seem like it's too daunting for one person to have any impact, make any difference. But individuals always make a difference.”

Joe Biden spoke to the graduating class at Colby College in Waterville, Maine, on May 21, where he shared stories from when he was younger. The former vice president encouraged the students to promote unity and to become involved in shaping the future of America. 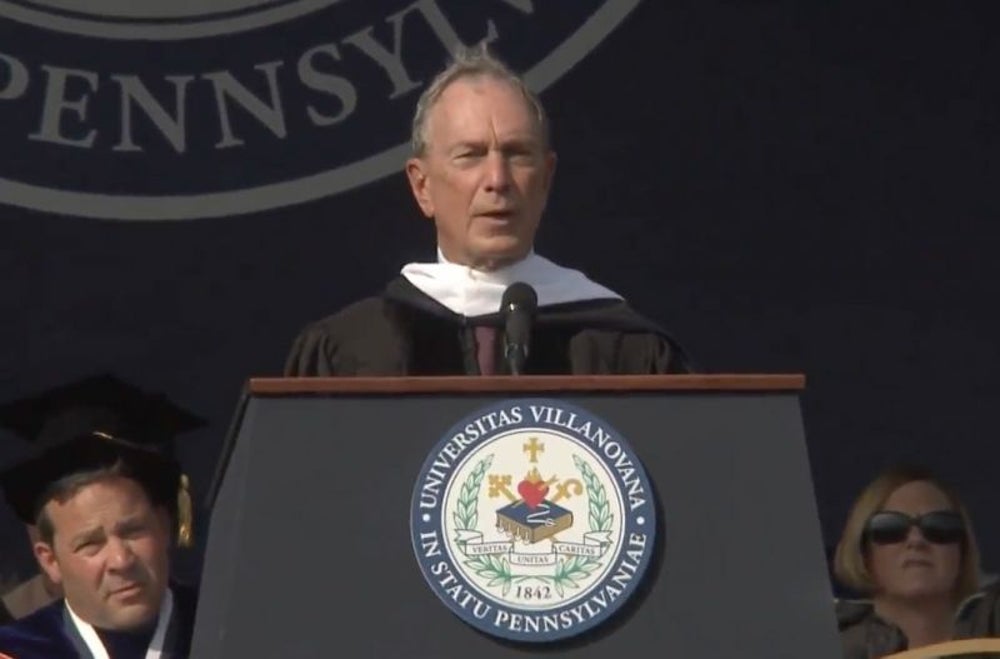 “Today, patriotism doesn’t require us to endure starvation or extreme deprivation. But it does require us to have the courage to do not what is easy but what is hard.”

Businessman, author, politician and philanthropist Michael Bloomberg gave the 2017 commencement speech at Villanova University. During his speech, the former New York City mayor talked history, politics and the future. He asked the students to unite as a nation, regardless of the political discord in the country. 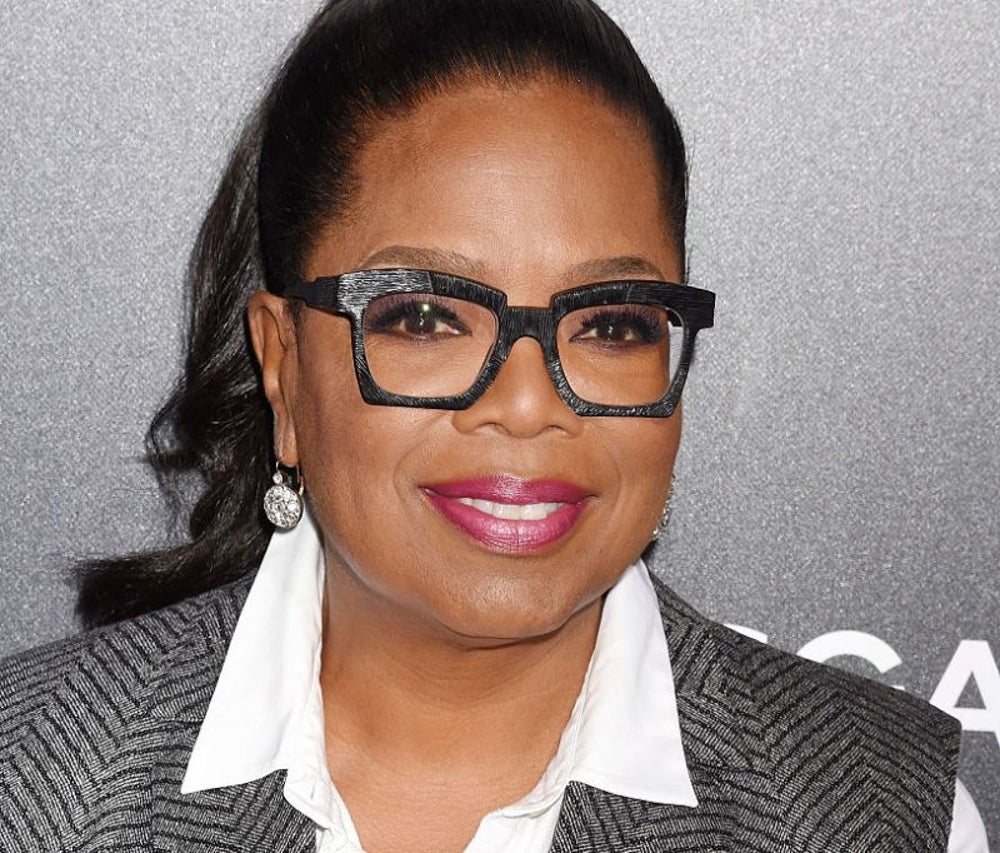 “It’s a big, bad world out there. … There is nothing more powerful than you using your personality to serve the calling of yourself.” (Skidmore College)

“Ask the question: How can I be used? Life, use me. Show me through my talents and my gifts, show me through what I know, what I need to know, what I have yet to learn, how to be used in the greater service to life. You ask that question and I guarantee you, Smithies, the answer will be returned and rewarded to you with fulfillment, which is really the major definition of success for me.” (Smith College) 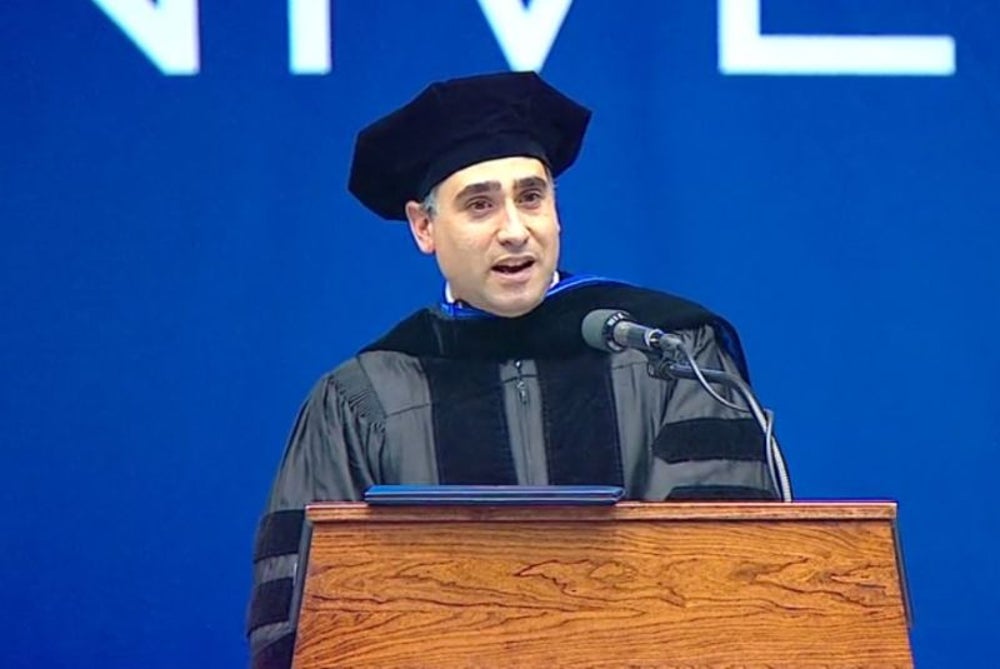 Computer scientist, entrepreneur and venture capitalist Martin Casado gave this year’s commencement address to the graduating class at Northern Arizona University. To the graduating seniors, Casado shared his own stories of struggle and success and advised them to follow their goals and understand there will be hardship and failures. 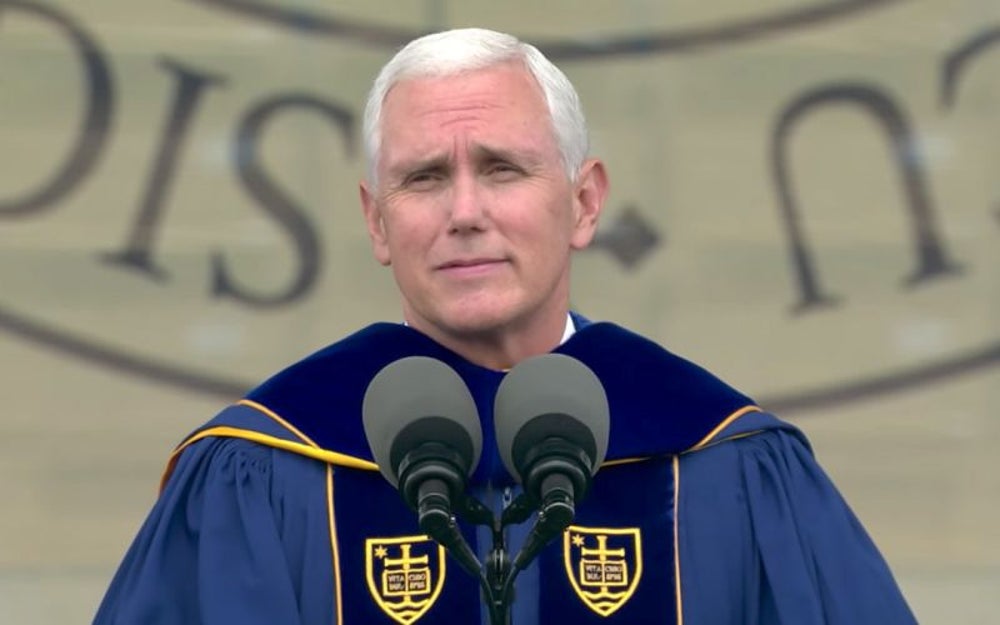 “I urge you, be leaders for the freedom of thought and expression.”

Vice President Mike Pence gave the 2017 commencement address at Notre Dame University on May 21. Pence encouraged the students to be leaders and to have faith.