Mobile Internet is witnessing an unparalleled growth in India as more and more people are expressing keenness to consume the internet every year. Surprisingly, it’s not the social networking apps like Whatsapp and Facebook that are dominating the mobile internet space.

The digital content is also proving to be a leading force behind the growing number of internet users in India. Affordable access to mobile data coupled with cheaper mobile phones has influenced the general trend of readily accepting digital content in India.

According to the Mary Meeker Internet Trends, 2017, report, Indians are spending 45 % of their time on Digital Entertainment media like Gaana, Hotstar, AIB and Netflix and 34 % time on search, social and messaging. The report on notable global internet trends in 2017 highlights internet consumption on mobile and mobile browsing habits of Indians.

Mary Meeker is an American venture capitalist and a partner at the Silicon Valley venture capital firm Kleiner Perkins Caufield & Byers (KPCB). She primarily deals with Internet and new technologies.

Meeker delivered her annual Internet Trends report at the Code Conference in California on 31 May, 2017. Here are some of the key takeaways from her report: 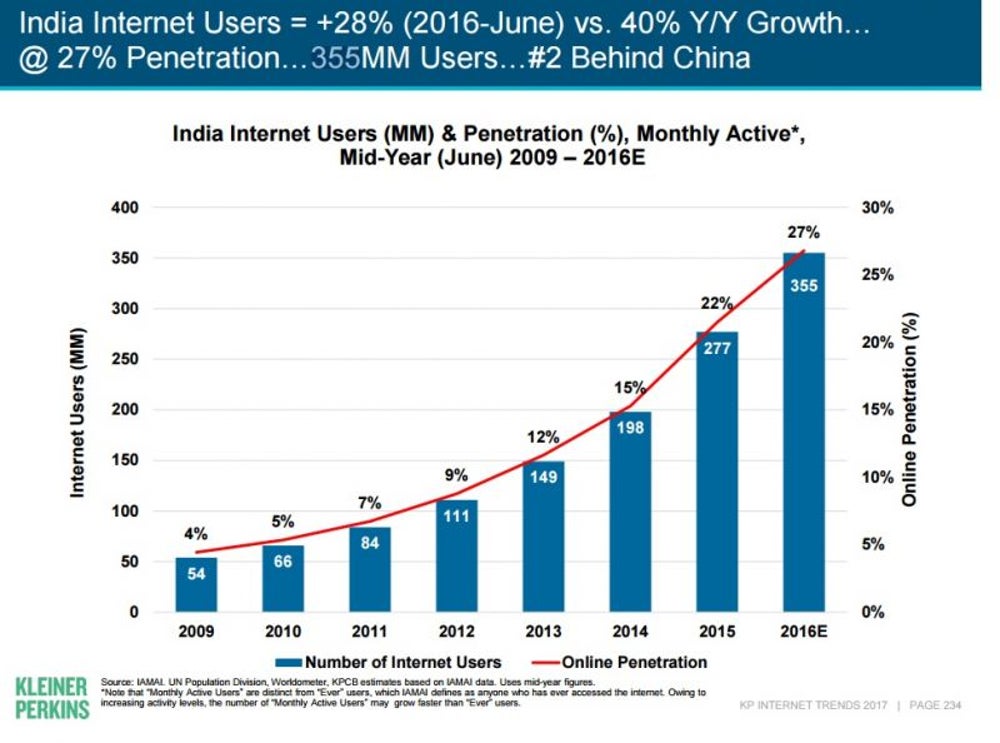 80% Of Web Traffic Is Directed Via Mobile 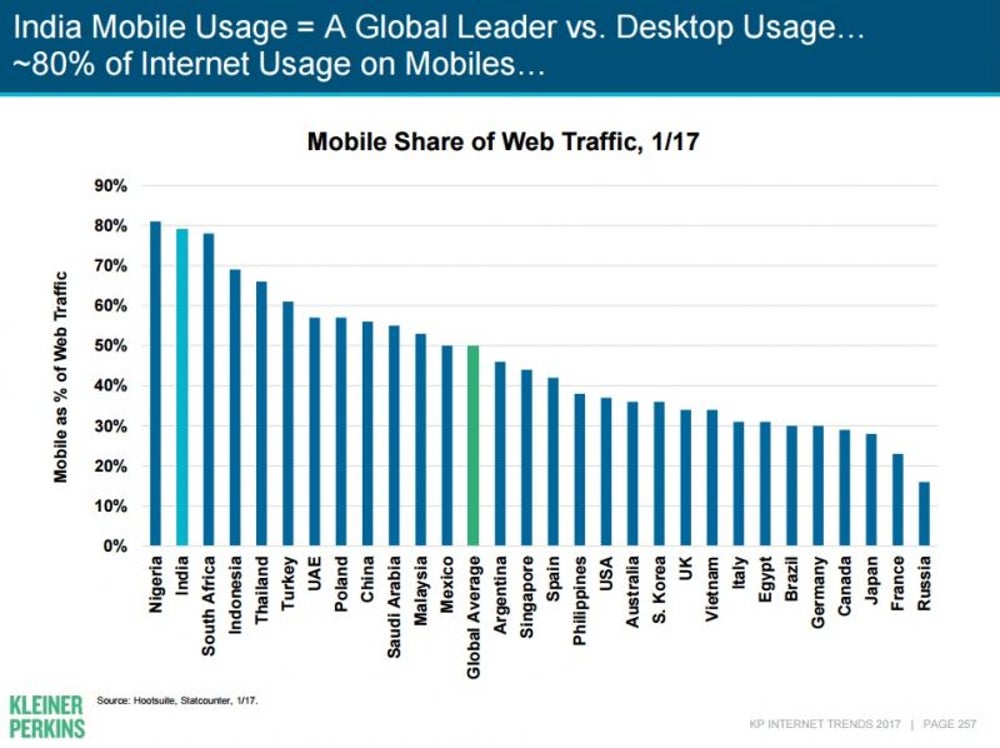 Smartphones have entered every nook and corner of the country, shooting up the number of mobile phone users. According to the report, India is behind Nigeria in terms of mobile phone usage with over 80% of web traffic routed via mobile. This also proves that the internet penetration in India is largely driven by mobile phones instead of a desktop.

Slide in the Popularity Quotient of TV Shows 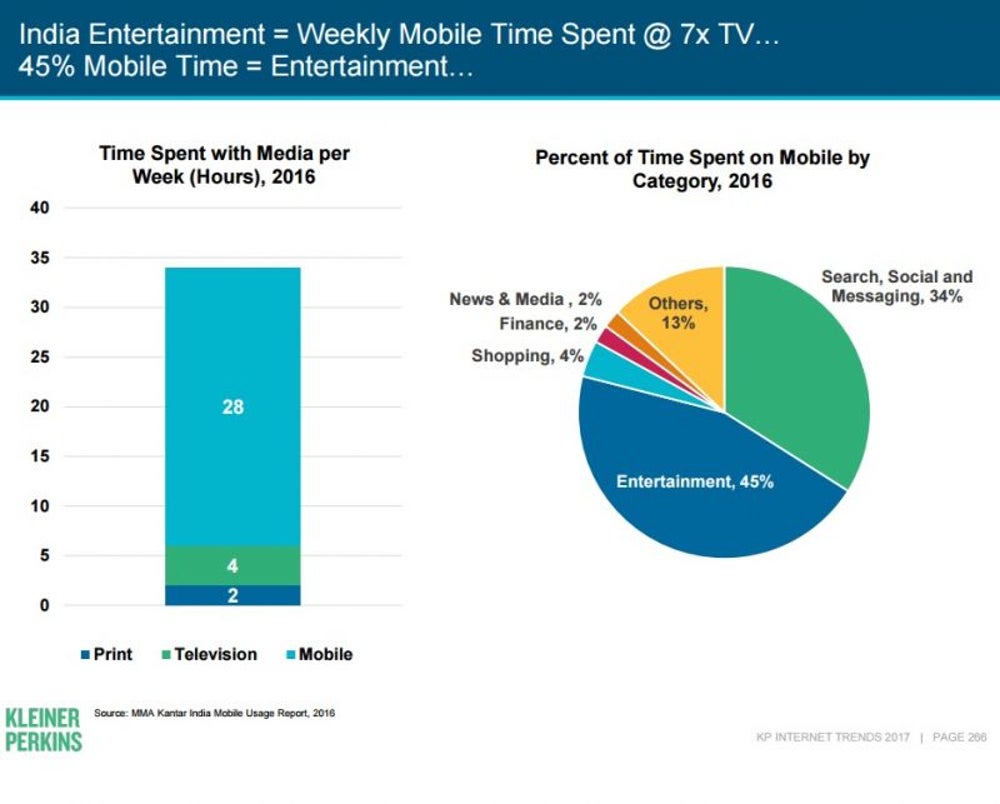 The report highlighted that Indians spend 45 % of their time on mobile phones, consuming digital content. The Tv soap operas and reality shows are now getting replaced by web video shows like AIB roasts and Hotstar. The dramatic growth in the video content is to some extent due to Reliance Jio’s entry into the Indian market.

Among the e-commerce players in India, Flipkart, Paytm, Amazon, Shopclues and Snapdeal are the top contenders in the Indian market, the report states. 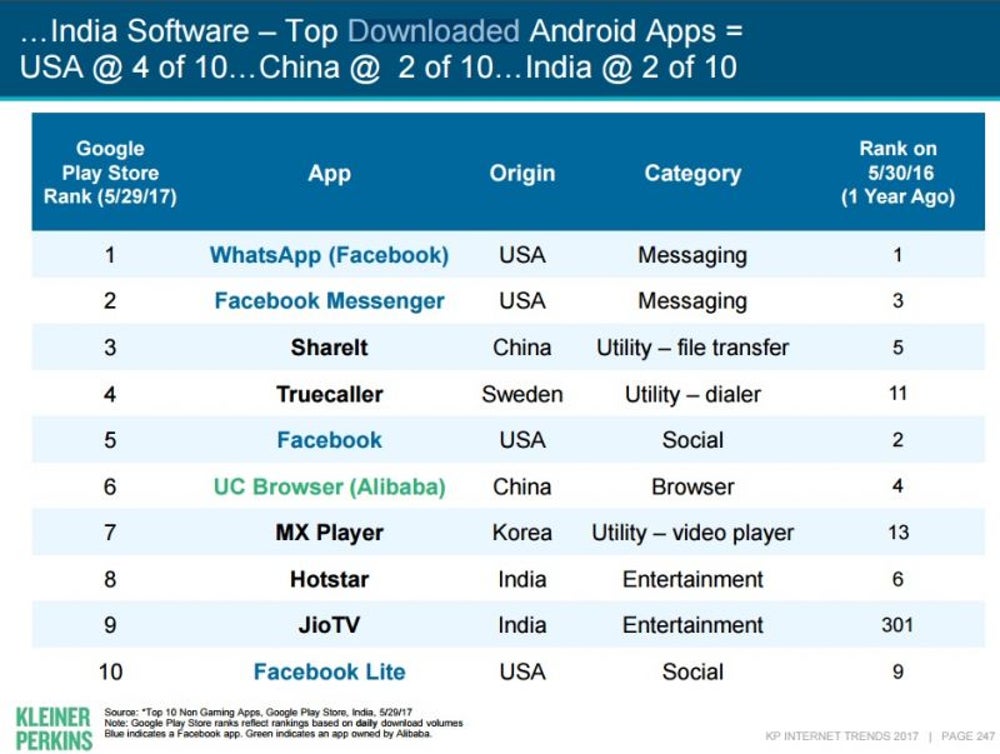 Talking about the most downloaded Android apps, Indian entertainment apps like Hotstar and Jio Tv have managed to bag a slot in the top 10 categories of the list.

Apart from that, US-based apps like Whatsapp and Facebook Messenger have emerged the top two most downloaded apps this year. Interestingly, Whatsapp is still at number one position as it was a year ago.

The original code from the World Wide Web will be auctioned