Get to know the music mogul and Snapchat star through his 'keys to success' and his partnerships.
Next Article

You’ve probably heard of DJ Khaled, but you might not be sure of what he does. (Don’t worry, he gets that a lot.)

Chances are you’ve heard one of his songs this spring or summer, bumping from the speakers of a car cruising by. Khaled currently has three tracks on the Billboard Hot 100 list, and he dropped a new album, Grateful, on June 23.

The star-studded Grateful features guests including Beyoncé and Jay-Z, Drake, Rihanna, Justin Bieber, Chance the Rapper, Nas, Alicia Keys, Nicki Minaj and more. It’s Khaled’s 10th album. He previously produced hits such as “All I Do Is Win” and “We Takin’ Over,” but he was never as big a star as he is today.

Born in New Orleans to Palestinian immigrant parents in 1975, he grew up in Louisiana and Florida and helped with his family’s business. When times got tough, he worked odd jobs and eventually worked his way up to become a prominent radio DJ in Miami, Fla., and producer of albums by Fabolous, Terror Squad and Fat Joe. He founded his record label, We The Best Music Group, in 2007, and today it’s an imprint of Epic Records.

With his newest release, it’s difficult to say whether the 41-year-old music producer, born Khaled Mohamed Khaled, is better known for his music or for his social media following. He has 6.5 million Instagram followers and several million Snapchat followers (Snapchat hides such figures), and he’s known for posting video stories of himself with his eight-month-old son, Asahd (who’s pictured on the Grateful cover art) or jet skiing (getting lost at sea).

Khaled’s ability to amass an A-List roster of collaborators and a sky-high following, not to mention a variety of endorsement deals, speaks to more than his ability to promote himself. It’s evidence of his expert networking skills and relatability, as well as his tremendous work ethic. Last fall, he published a book called The Keys, detailing the keys to success that he shares in interviews, in advertisements and of course, on social media.

For the uninitiated, here are seven tidbits to help you get to know DJ Khaled.

He has business ties with Apple.

Early last year, Khaled inked a deal with Apple Music and launched his own Beats 1 radio show, “We The Best Radio.” Every Friday, he shares a playlist of songs and sometimes features guests for interviews.

Khaled has also appeared in ads for Apple Music with Ray Liotta and Naomi Campbell. In May, his 2017 track “I’m the One” broke a record for song streamed the most times within a week on the platform -- earlier that week, it had debuted at number one on the Billboard Hot 100.

Related: Apple Presents a Pretty Good Take on 'Shark Tank' With Its First Foray Into TV

He documented his son’s birth on Snapchat. 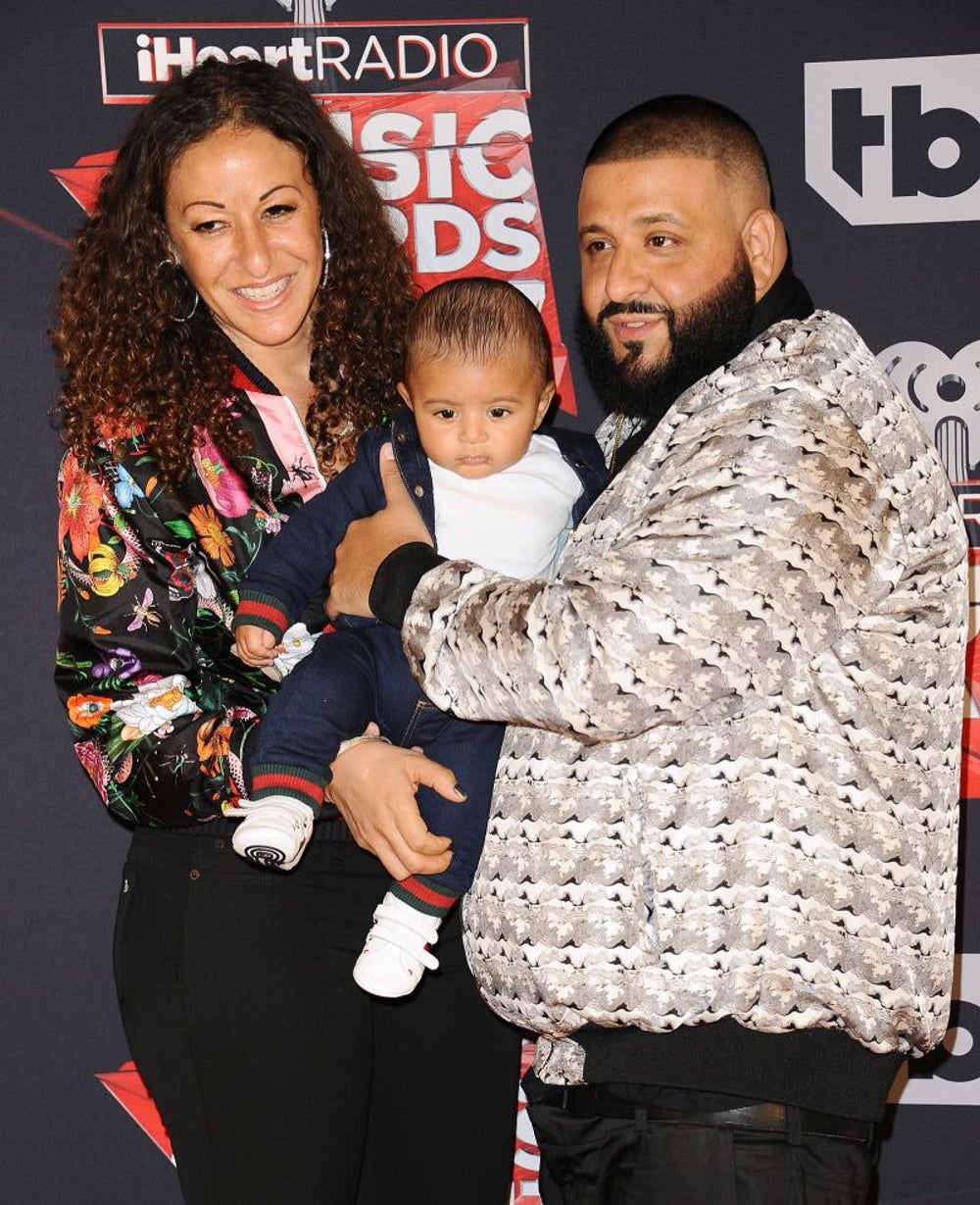 Khaled’s long-time girlfriend, Nicole Tuck, gave birth to their son, Asahd, on October 23, 2016. Leading up to the birth, Khaled announced that he planned to document the labor and delivery on Snapchat.

He followed through, but he didn’t veer into graphic territory. He posted photos and videos of himself looking stressed, but he didn’t show Tuck’s face. He even found a way to incorporate motivational tips: “There’s no shortcuts to greatness, success,” he said as he eagerly anticipated his son’s arrival, knowing there was no way to speed up the process.

Related: 4 Ways to Engage Your Followers on Snapchat

He once shared a stage with Arianna Huffington. 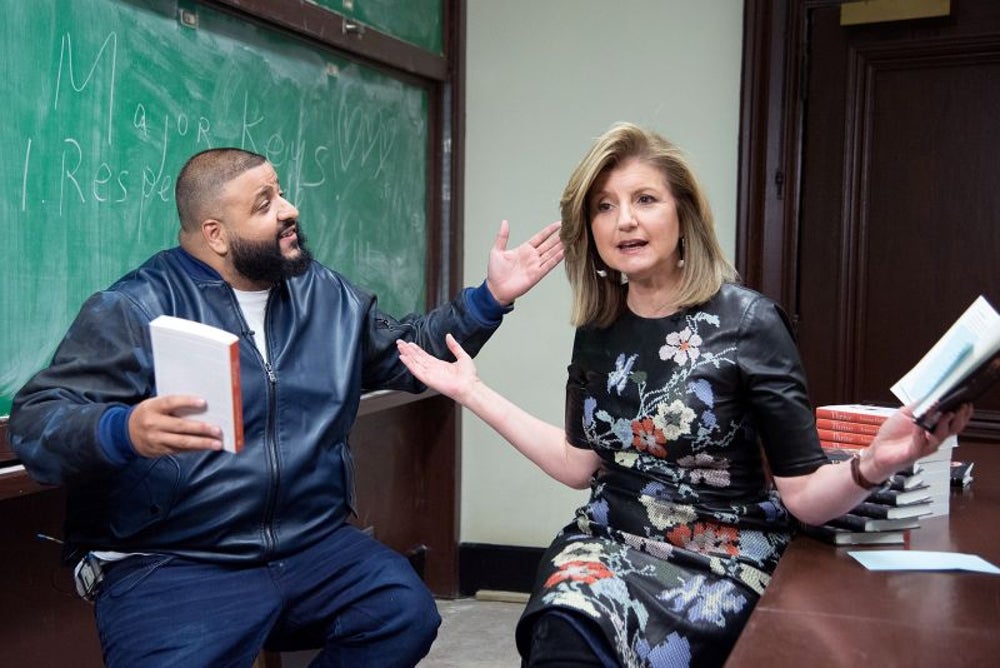 In December 2016, the Columbia Organization of Rising Entrepreneurs at Columbia University invited DJ Khaled to speak in conversation with Arianna Huffington. The topic? Keys to success, of course. Khaled shared tips such as “don’t ever play yourself” and “glorify your success.”

Huffington, the co-founder and CEO of Thrive Global and founder and former editor-in-chief of The Huffington Post (now HuffPost), later told Billboard, “He has a very natural approach. It’s rooted in the deeper stoic philosophy of approaching life -- to not be overwhelmed by events or defeated by adversity.”

You can watch the talk here.

He gave his son an 'executive producer' credit on Grateful. 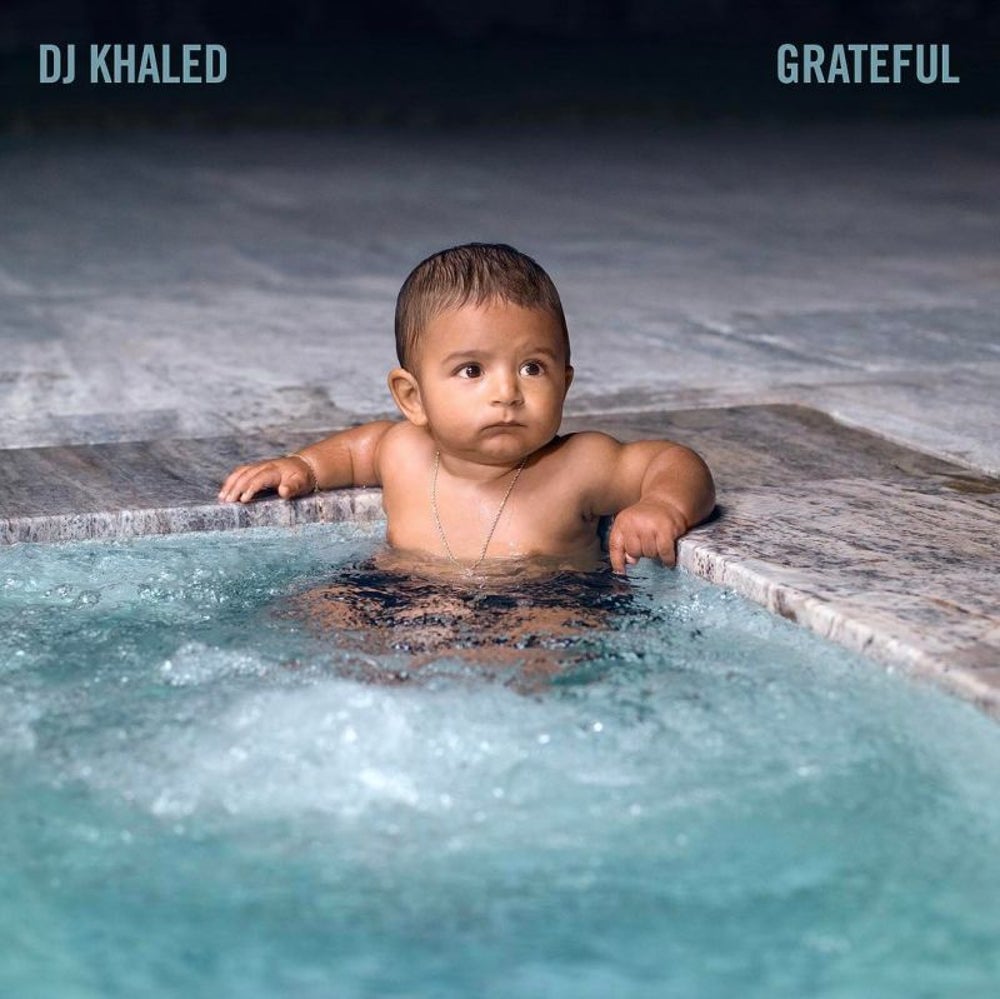 Khaled has already decided that his son, Asahd, who is not even a year old, is an “icon” and “mogul” in the making. To jumpstart the infant’s career, he put him on the cover of Grateful (sitting in the corner of a hot tub, no less) and gave him an executive producer credit. He also frequently features his son on social media, including via an Instagram account he made for him, which already has one million followers.

Related: The Secrets of the Woman Who Quit Her Job and Made Her Pug an Instagram Celebrity 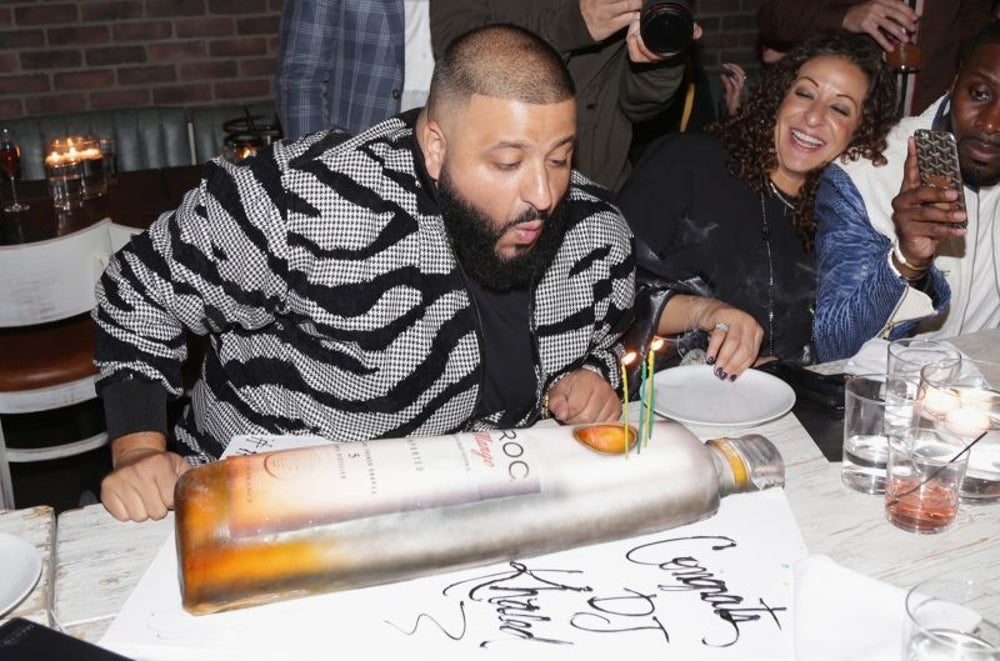 Sean “Diddy” Combs (a.k.a. Puff Daddy, or as he’s called himself, “Ciroc Obama”) has long had an endorsement deal with Ciroc vodka, owned by beverage company Diageo. But in October 2016, Diddy passed the baton, or rather, handle, to DJ Khaled. When the company unveiled its newest vodka flavor, mango, it brought DJ Khaled on board as chief ambassador. A video ad released in conjunction with the deal’s announcement chronicles Khaled’s perseverance throughout his career.

Related: 5 Considerations When Seeking a Celebrity to Endorse Your Brand

He co-owns a soul food restaurant. 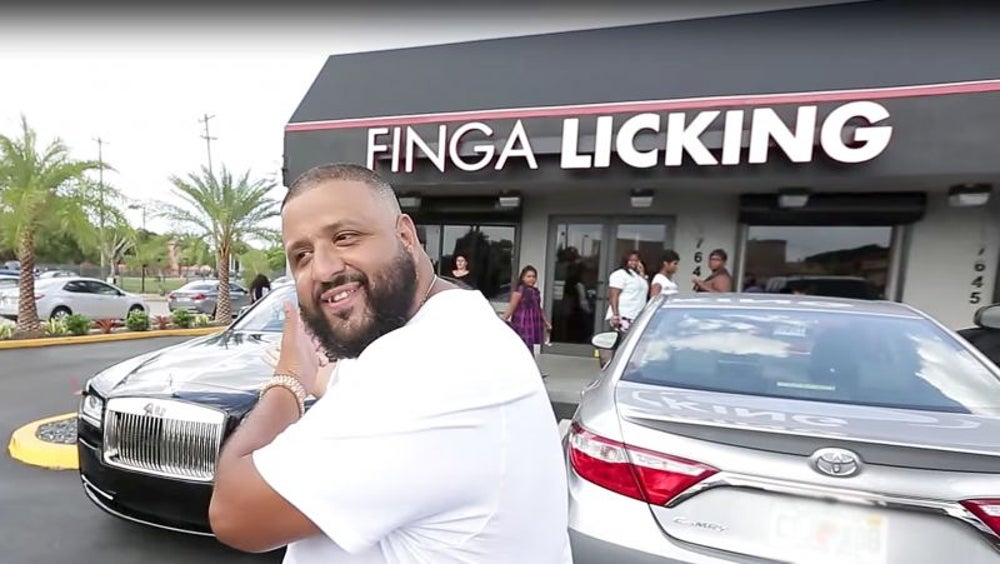 It’s called Finga Licking and it has three locations in the Miami, Fla., area. He co-owns the restaurant with rapper and music producer E-Class, founder of Poe Boy Music Group.

“When we put this place together, we thought about having good energy, good food, good vibes, representing the community and the city and giving jobs,” Khaled said in a video interview with Complex at a Finga Licking location.

Related: 6 Rappers Who Are Also Franchisees 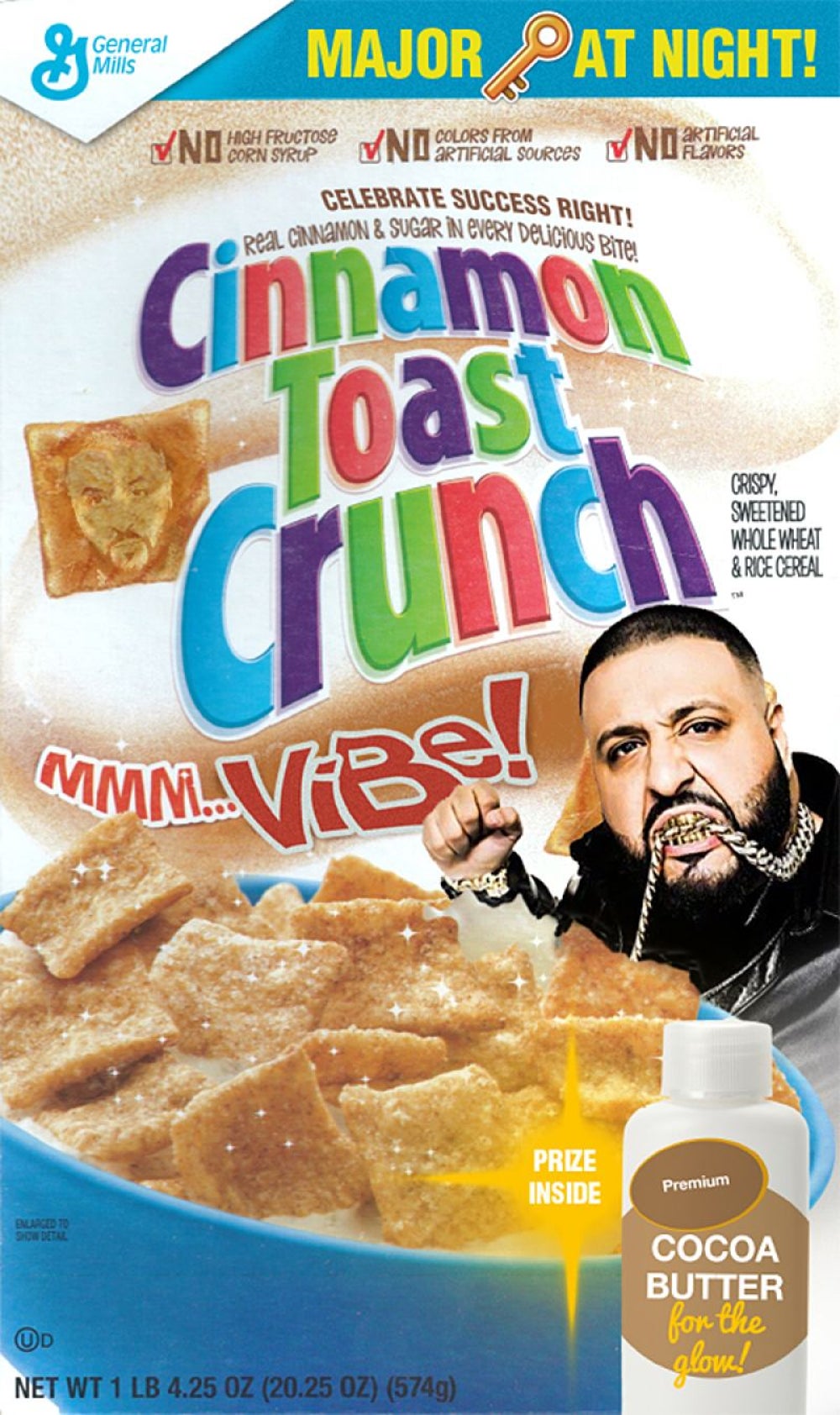 Khaled often speaks of his love of Cinnamon Toast Crunch. In a conversation with Aziz Ansari, Pharrell and Scott Vener on the Beats 1 show “Othertone,” he called the breakfast cereal a “major key at night” and said he sometimes eats it in the studio at 5:00 in the morning.

He’s even tweeted back and forth with the official Cinnamon Toast Crunch Twitter account, which fulfilled his request to photoshop a picture of him onto a box.

Perhaps an endorsement deal with General Mills is in Khaled’s future?

Kara DioGuardi Knows How Songwriters and the Music Industry Can Survive

Want to Learn the Music Business? This $35 Bundle Might be What You're Looking For.

How This Entrepreneur Built a Defiantly Local Music Label

Learn to Use Music Production Software Like Ableton Pro