Emmy's Organics, founded in 2009, makes allergen-free treats that are now sold in more than 12,000 retail locations, including Starbucks.
Next Article

Samantha Abrams encountered an experience many graduates go through: after finishing college with a major in theater arts management, she searched for a job but "nothing really felt right."

Then, in 2009, her boyfriend of a year, Ian Gaffney, proposed -- but not for marriage. He wanted to start a business together.

"I remember when Ian kind of proposed the idea of business, I was like, 'Wow, he must really like me, because he wants to start a business with me,'" Abrams recalls. "This business has been a huge part of our relationship, but it's worked, weirdly."

That business, Emmy's Organics, now sells coconut cookies in more than 12,000 retail locations nationwide, including Wegmans, Whole Foods, Starbucks, Hannaford and Costco. The business has grown about 40 percent year over year, with its focus on health helping the company stand out.

The cookie industry brings in about $26 billion annually, and the market is mostly controlled by brands owned by Campbell's, Kellogg and Mondelez. All the while, consumers are increasingly looking for snacks with healthier ingredients, which puts a brand such as Emmy's, whose dehydrated cookies are free of gluten, dairy, soy and importantly, preservatives, in a desirable position in the marketplace.

But, the founders of Emmy's, a certified B Corp, weren't thinking of consumer preferences and the market when they started out in their home kitchen. Gaffney just wanted a treat that wouldn't upset his stomach, as he had developed digestive issues. (This was before the gluten-free craze really hit.)

"He actually made this recipe as just a need for himself, and he taught me how to make them one night," Abrams says. "That was really how our company started."

Neither had much business, manufacturing or even baking experience. They just thought it'd be great to put the treats in a bag and slap a label on it. Fortunately, in a case of right place, right time for Emmy's, the market for gluten-free products exploded.

Once they had their product, Abrams and Gaffney, who reside in Ithaca, N.Y., would bring cookies to local health food stores. They also got space at the Ithaca Farmer's Market, where they would sell cookies in bulk and get feedback from customers. All the while, they moved from their kitchen to Gaffney's mother's (whose nickname is Emmy), then to another relative's house "until we were busting at the seams."

"Baking, calling, packaging, everything. We were working constantly," Abrams says.

The couple ventured to New York City with sample bags with price sheets in hand to try to hock their products to independent health food shops.

"We didn't make appointments. Knowing what we know now, I can not believe that this worked," Abrams says. "But, it's that pure naivete of just let's go for it. I think it really helps."

In a sort of lucky break, they had a friend who worked for Whole Foods, but in the body department. Still, the friend walked the Emmy's founders through the process of submitting their product to be sold in stores -- Whole Foods only allowed new products to be sold on a store-by-store basis. They got into some locations, and would fulfill orders by sending boxes of clear bags of cookies with labels printed with a home printer.

"We were sealing them by hand. We were scooping the cookies with ice cream scoops and Ian was trying to scoop so fast and trying to do so much that he gave himself carpal tunnel," Abrams says. From that point forward, the company purchased equipment to package cookies.

Eventually, Emmy's web presence helped it get the attention of a broker, who helped get the brand into more shops. The Starbucks partnership came in January, and marked the first time Emmy's was sold nationwide.

"It's a dream come true, because we were nationwide kind of, but in pieces," Abrams says.

Click through the slides to see Emmy's Organics ingredients for success -- and what you can learn from them.

Experience can come from many places. 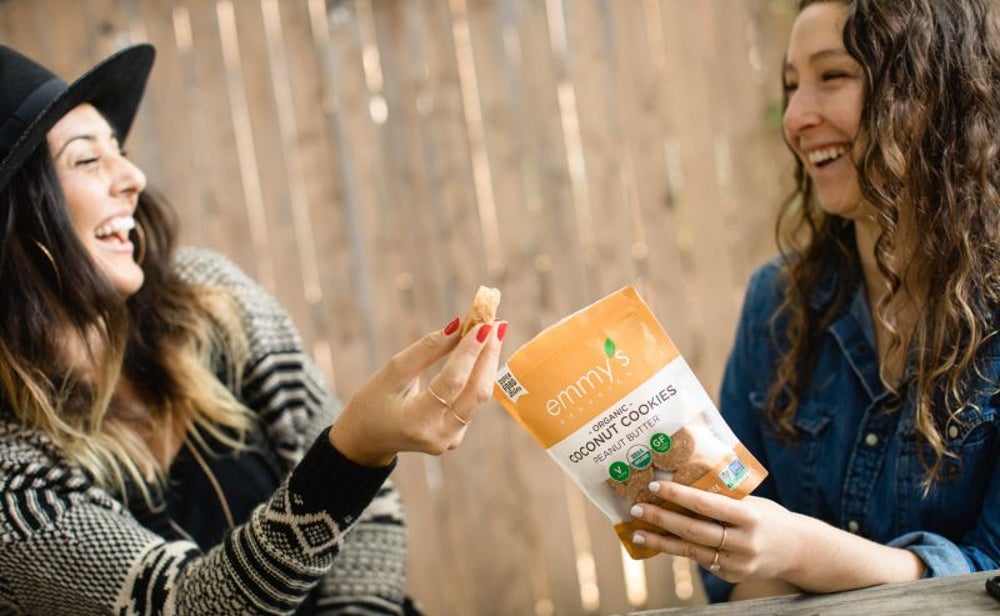 Abrams majored in theater arts management, which you may think wouldn't be helpful for running a business. She disagrees.

"I originally wanted to produce theater and dance and did a lot of that while I was in school. Much of what I did involved just making things happen, whether it was an obscure art installation or getting permission to use a certain studio on campus," she says. "Even though I had no experience in the natural products industry, practicing those skills and learning how to 'make things happen' has helped me a lot. I was already prepared to make big requests."

If you've already went through college, think about your experiences through another lens and see what skills you picked up along the way. If you're a student, don't be afraid to do things that aren't related to business, because they may teach you valuable lessons.

When it comes to the brand, use your customers. 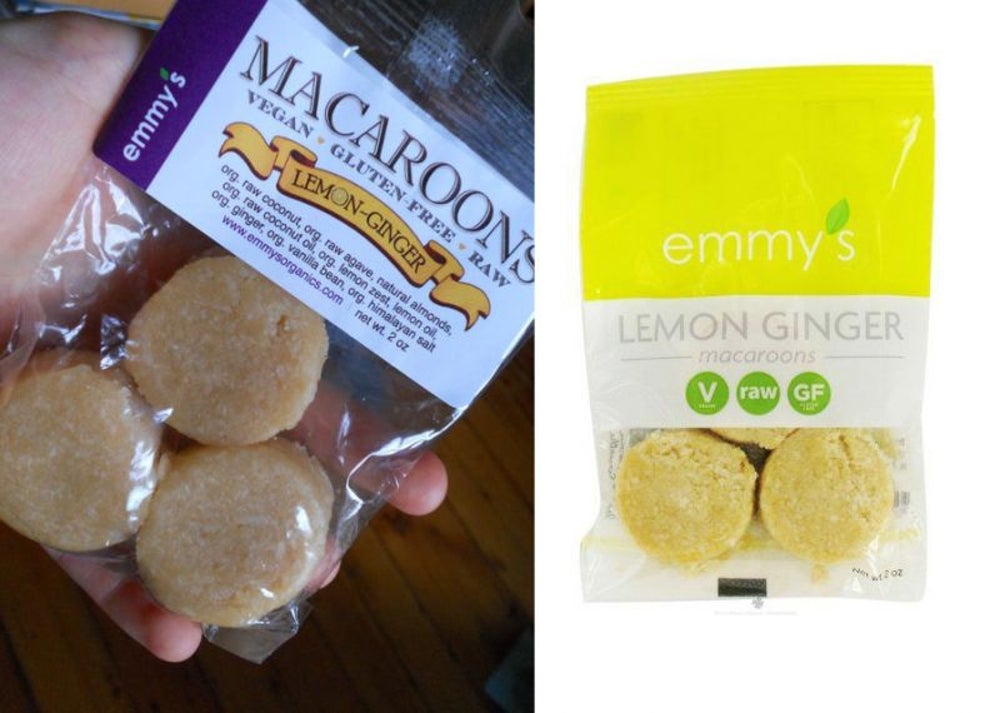 Initially, Emmy’s had a basic package design, but after visiting their first trade show, Abrams saw all these beautifully designed products and wanted to make a change -- but they run into an issue.

"We wanted to redesign our packaging but couldn’t afford it, we did a crowdfunding campaign where people who donated got our products as gifts,” says Abrams. “We found this was a great way to turn customers into true fans: they were able to contribute to our success and then see our rebrand on shelves a year later. Plus, that re-brand helped us grow something like 150 percent." 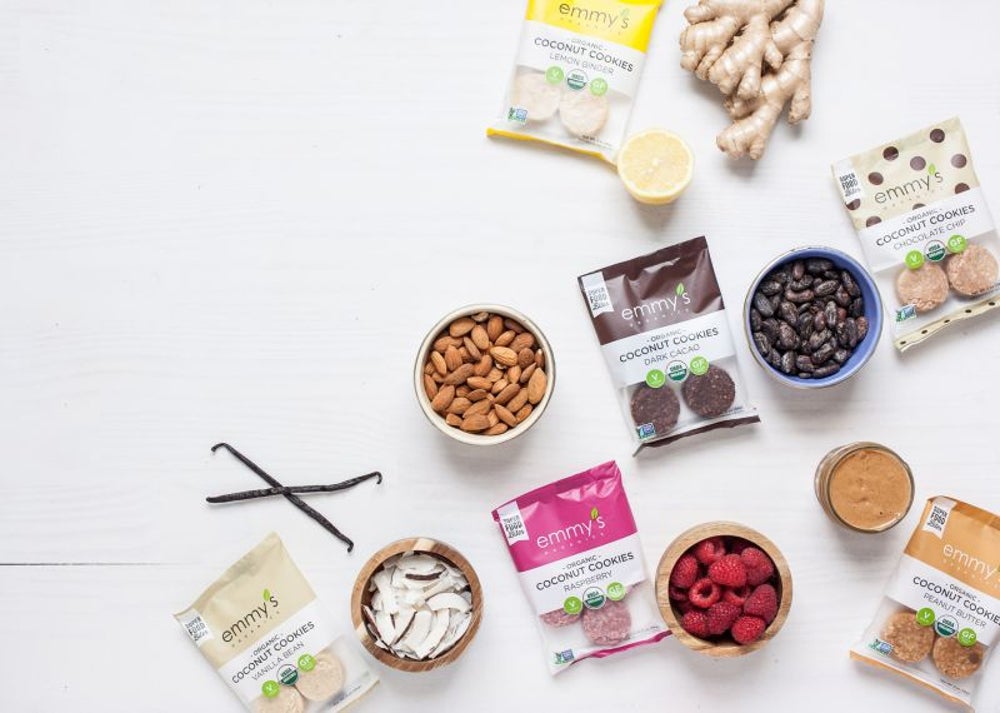 One constant for the founders of Emmy's was to slowly and sustainably build the business.

"We let our demand draw us. We're super scrappy, so [we didn't] buy too much of anything," Abrams says.

They only would buy equipment or greater quantities of ingredients once their current levels couldn't sustain sales. For example, Emmy's started buying coconut from a distributor once its local source couldn't handle their orders.

"I remember when we bought our first 50 pound bag of coconut, and it was like, oh my God, we're never going to go through this," Abrams says. "Now we're getting pallets and pallets of coconut into our facility."

She adds, "I think that growing slowly in the beginning gave us experience, and we learned so much in those years and also helped us feel we've grown sustainably. It wasn't the plan in the beginning, but I really appreciate that now."

Emmy's success shows that taking your time with your business is a worthwhile pursuit. While you may be tempted to grow quickly, you should do so sustainably.

Be hungry about the market. 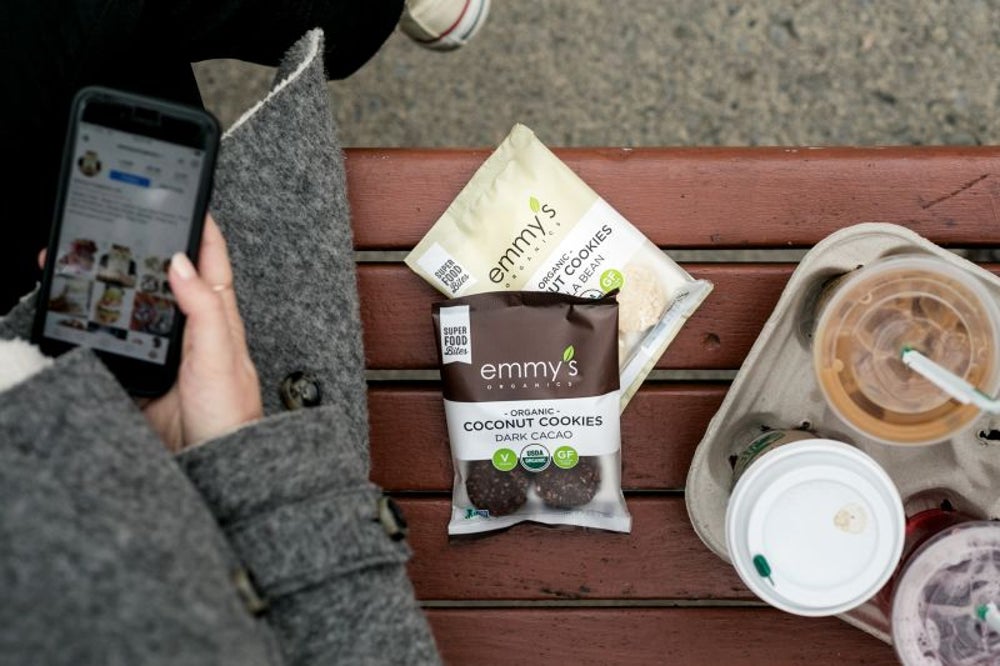 It's always good to remember that other companies in your industry have similar challenges that you do, and you can learn from them -- or even make friends. Abrams says she looks up to the founders of Peeled Snacks, a dried fruit brand, and how they grew their company.

"There's so many companies in the industry, even companies that are smaller than us, that I'm inspired by, whether it's because they just have great branding or have a cool story to tell," Abrams says. "I just literally walk up and down the aisles of grocery stores because I'm just so fascinated by the product and the story behind it."

Don't get caught in your own bubble and constantly look for inspiration to tackle your challenges in new ways.

Related: How to Start a Business: a Step-by-Step Guide to Growing Your Big Idea Into a Successful Company

Balancing love and business, or not. 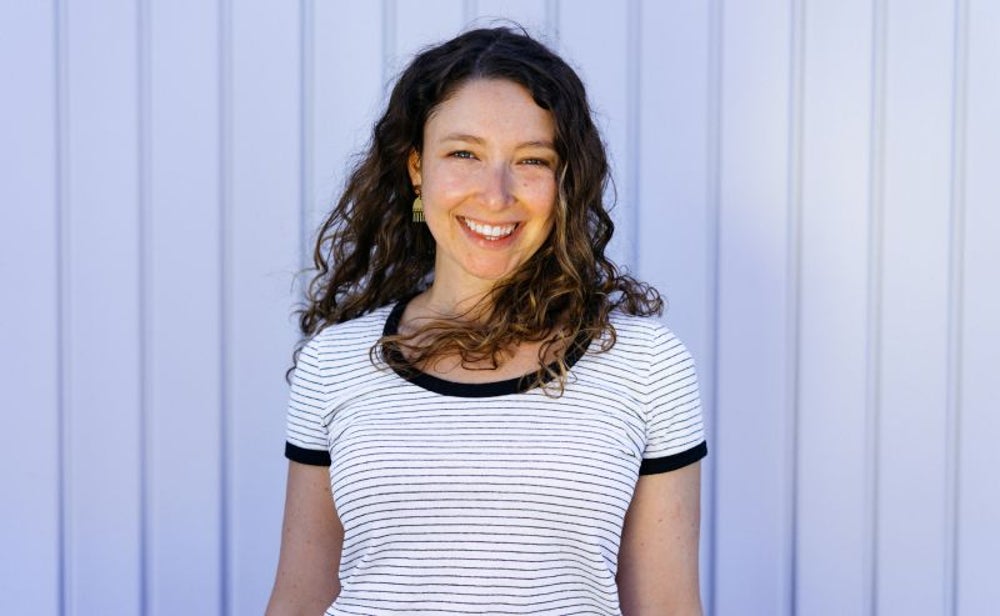 So the question you may have is: What's it like for Abrams to run a company with her romantic partner?

"It actually works very well for us," Abrams says. "His desk is right next to mine and we're just naturally great communicators. I think having a business kind of forced us to be even better [as a couple.] If there's any kind of issue, we're really good at kind of taking care of that right away. But, we actually have a really fun time."

She adds that her and Gaffney gravitated toward different responsibilities in the company. She also recounted advice she received from another founder.

There's 'no light at the end of the tunnel.' 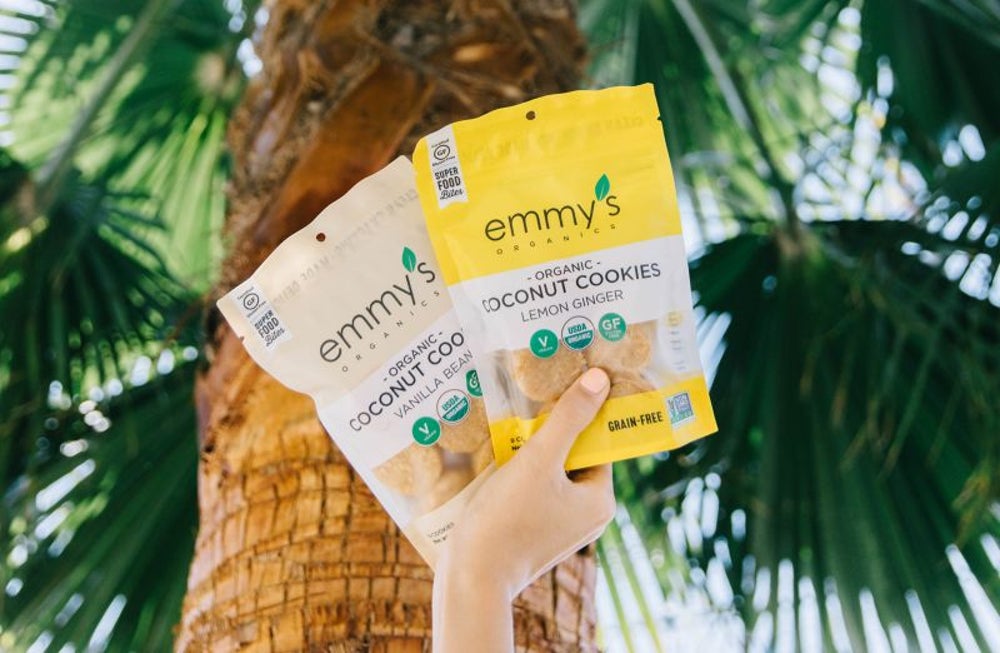 One piece of advice from Jeff Furman, an Ithaca resident and chairman of Ben & Jerry's, that has resonated with the Emmy's founders is that "there is no light at the end of the tunnel."

"It sounds very dark, but it's reassuring," Abrams says. "So for us, when issues come up, we don't freak out. If a machine breaks or someone is out sick and it's just crazy madness, we expect those things because there's no light at the end. We're just really working on growing the company."