If it's big in Japan, it could also hit big in the United States--and these entrepreneurs are betting on it.

Once one starts listing the examples of Japanese culture infiltrating the United States, it's pretty hard to stop. One of the most-anticipated summer movies, Speed Racer, is based on a '60s anime. Leonardo DiCaprio, James Cameron and M. Night Shyamalan are all attached to anime-based projects.

Cosplay and anime conventions don't just happen in hot spots like Los Angeles, San Francisco and New York, but all over the country. The nation's first J-Pop mall is in the works in San Francisco, created by Japanese film distributor Viz Pictures, and will feature a Japanese-only film theater, bookstore, café and fashion boutiques with the U.S.'s first boutique for Gothic Lolita fashion. Names once foreign to Americans-- Pokèmon, Tamagotchi and Totorro--have become beloved household brands.

Yet the import market for Japanese pop culture is still in its infancy, and oftentimes it's entrepreneurs who are bringing the best items here to sell to early-adopting arbiters of cool, whether they are 7-year-olds clamoring for Naruto or hip 20-somethings sporting Domo-kun t-shirts.

The proliferation of Japanese culture first struck Roland Kelts when he noticed a giant Pikachu floating merrily alongside Snoopy in the Macy's Thanksgiving Day parade.

"That was just the tip of the iceberg," says Kelts, a University of Tokyo professor and author of Japanamerica: How Japanese Pop Culture Has Invaded the U.S. "I mean, [look at] the fact that sushi is available in mainstream supermarkets around the country; the fact that Japanese style, design and architecture are appearing in major cities around the country; [and] the popularity of manga and anime in bookstores and Wal-Mart and Target."

One major reason so much Japanese culture takes root here is kawaii--the ultra cute design aesthetic that permeates much of manga, anime, Japanese advertising and even household products.

"What I think is most appealing about Japanese culture is its amazing mixture of cuteness, coolness and playfulness," says Seiji Horibuchi, president and CEO of VIZ Pictures. "Playfulness can allow us to have generous curiosity, to cross borders between cultures, beliefs, genders, ages and so on. I think that's the true beauty of Japanese culture."

FredFlare.com is deep in the business of selling products that make customers go "awww!" so Japanese products are a natural fit.

"We're really big on cute," says Keith Carollo, who began the e-commerce site with Chris Bick in 1998. "I think [Japanese manufacturers] just have this talent for bringing products to life."

Currently, FredFlare carries a line of Japanese kitchen items such as a spatula that looks like a frog and a skillet with a panda face on it. The site also sells accessories, Japanese craft books, and other kitschy Japanese items like a squirrel-shaped lint roller. The team hasn't yet been to Japan to source products but has had luck with trade shows, scouring the web, and being approached directly by suppliers.

Eric Nakamura finds his product source contacts to be a crucial part of his company's success. In 1994, Nakamura started zine Giant Robot, featuring Asian pop culture. The zine turned into a glossy (currently with a circulation of 55,000) and Nakamura opened the first of five retail stores in 2001. He also sells items through his website and has a restaurant, gr/eats, near his original Los Angeles location.

Nakamura does most of the product sourcing for the business, finding things like wind-up toys, vinyl figures created by artists, and quirky stationery and books.

"You can't just copy someone else's shop," says Nakamura, who says this has happened before and is always looking for new products for the Giant Robot website. "It's not that easy and you can't get a lot of the things we get. We have a lot of connections other people won't have, and by the same token, they get connections we don't have." 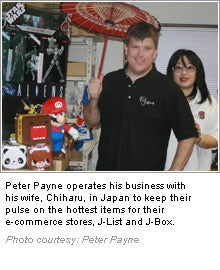 Living in Japan helps Peter Payne directly source items for his e-commerce stores, J-List, which contains some adult-only items, and the friendly-for-all-ages J-Box. Some products ship directly from Japan, where Payne operates his business with his wife, Chiharu, while others ship from a warehouse in San Diego.

"One of the good things about Japan is it's so multi-faceted," Payne says. "There's something for you whether you like the idea of beautiful rock gardens in Kyoto or the newest video game."

"We've got 10 to 15 suppliers that we buy from in Japan, and [we] look at things like catalogs and new product announcements from distributors," Payne says.

"It's hard to know what will sell so we keep our ear to the ground, watching blogs that talk about currently popular anime series, gadgets from Japan, and so on. Often, we'll see something on a blog post, like [the recently trendy] microwave potato chip maker, and we'll scramble to get it in stock as quickly as popular while people in the blogosphere are still taking about it."

Payne says he's seen a definite increase in demand for Japanese products recently, due in large part to the ability for fans to access Japanese media, trends and culture on the internet. Kelts also sees "a lot of room for growth, especially in related product lines" to popular manga and anime.

Manga is a particularly growing segment; the Japanese comics for all ages increased in sales by 10 percent in 2007, reaching $220 million. Nearly 1,500 titles were estimated to have been released in 2007.

One common denominator among businesses that successfully sell Japanese products in the United States is the careful curation of their product mix. Just because something is big in Japan doesn't mean it'll be a hit here.

"What is interesting about [businesses] that have been successful [selling Japanese products] is they're not going to Japan and seeing what's hot in Japan right now," Kelts says. "They're keeping a very firm grasp on what their American customers would like. So I think respecting the cultural differences is still important. It's not exactly localization. They're not changing the products to suit the American customer. They're just selectively offering Americans what might work here."