The founders of BlaBlaCar met and launched their first beta product in 2006, but it wasn't until 2014 that use of their intercity, long-distance ridesharing service really took off. Today, they are the dominant ridesharing platform in Europe.

Eight years is a long time to wait -- especially when waiting is not something that entrepreneurs, who thrive on 24-7 hustle, do particularly well. But if the company that you are launching depends on people changing their behaviors to buy your product or service, patience is paramount.

"As an entrepreneur, you need to learn to wait. We had this struggle for a long time," says Nicolas Brusson, BlaBlaCar's COO and co-founder.

BlaBlaCar is an online platform that connects drivers traveling from one city to another with travelers headed the same way. Unlike Uber, the company focuses on long-distance rides (the average ride is about 213 miles), therefore competing more with trains and buses than taxi providers.

The service is also distinct in that it is designed to help a driver cover the costs of a ride, not profit from it; for every ride, BlaBlaCar calculates a suggested fare price (15 euros on average, or $17 to $18) based on mileage and tolls, which the driver can then choose to raise or lower by no more than 50 percent. BlaBlaCar makes money by collecting a transaction fee, approximately 10 percent of the total cost of a ride. Thus far, it's cost-sharing model has avoided the regulatory roadblocks faced by its taxi-like competitors.

Brusson and co-founders Frédéric Mazzella and Francis Nappez first launched BlaBlaCar in France in 2006. (The idea was inspired by Mazzella, who was almost unable to get home one Christmas because all of the trains traveling from Paris to the west coast of France were booked.) It would be another three years before the service would expand to Spain, and two more before it would hit the U.K.

Five years in, BlaBlaCar had launched in three countries and had approximately 1 million members. Thanks to two acquisitions of European ridesharing platforms, announced today, BlaBlaCar is now in 18 markets and 20 million members strong. 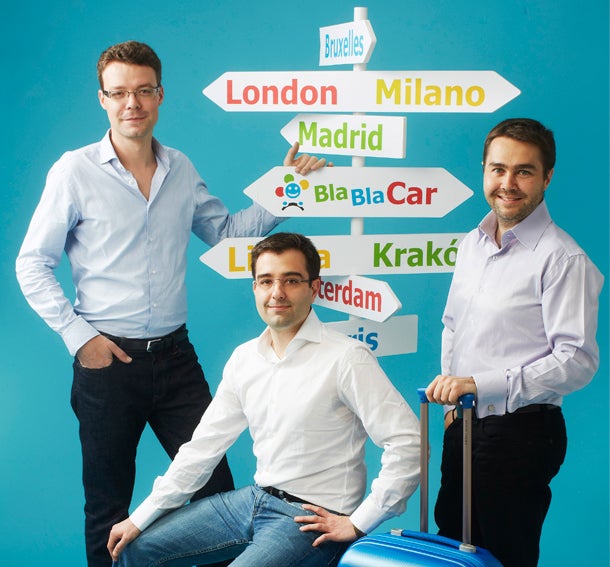 So far, the Paris-based ridesharing company is not operating in the U.S. That's not to say that it won't ever be, but the U.S. market isn't as appealing for the BlaBlaCar model as it is in Europe. The cost of gas compared to disposable income gives BlaBlaCar a sense of the "pain of driving" in a given country, and in the U.S., it's relatively much less "painful" to drive than it is Europe. Consumers aren't usually motivated to try a ridesharing alternative unless it's prohibitively expensive to drive alone. Also, in most of the U.S., outside of New York City and some parts of San Francisco, the public transit system isn't good enough to take passengers the first and last mile of their journey affordably. Meanwhile, in European cities, public transportation is readily available.

The company also raised $100 million in VC funding last year, one of the largest-ever investments for a French startup.

Part of what took so much time for the BlaBlaCar hockey-stick of growth to curve upwards was that it required turning the tide of public feeling about sharing a car with a stranger. "You had this perception of hitchhiking which was very negative, initially," says Brusson. "People thought, "Oh, it's hitchhiking. Oh it's unsafe. It's weird. It's for backpackers.'"

Over the last few years, consumer behavior has shifted. Airbnb, the accommodations rental platform, has helped normalize the idea of strangers staying in each other's homes. San Francisco-based ridesharing company Lyft has strangers jump in each other's cars for short rides around town. And new incarnations of the sharing economy are popping up regularly: Shuddle is a ridesharing, carpooling option for kids, catering to busy moms without enough time to tote their little ones all over time; Sailo is a service connecting boat owners with renters.

Having more startups enter the budding peer-to-peer space has helped raise its profile with consumers, though not overnight. "When you try to create something new that people don't do and change behavior, I think time matters. You need time to educate, to change this behavior," says Brusson.

For BlaBlaCar in particular, the platform's usefulness hinged on it reaching a large number people. To be able to match a driver with an empty seat going from Berlin to Munich on Friday evening, you need a passenger who wants to make the same trip at the same time, explains Brusson. With a scant user base, that's a challenge. "You have a bit of a chicken and an egg problem," he says.

Related: Sailo Wants to Be Your Airbnb for Yachting

If patience is the right leg of the BlaBlaCar founders, resilience is the left. That's because the founders were pretty consistently told that they were wasting their time trying to build a glorified hitch-hiking platform. "I remember the feedback we got when we were doing our MBA. People were saying, "You guys must be kidding. Go get a job in consulting or banking. Get a real job, because what you do is crazy," Brusson recalls.

But it was the little wins along the way that kept the trio committed. When BlaBlaCar first launched, Brusson posted that he would be traveling from Nice to Leon and, within an hour, he had a passenger looking to jump in the back of his car. The negotiated price of 15 euros ($16) was much lower than the roughly 100 euros ($106) it would have cost for a train ticket. And having a stranger in the back seat helped Brusson cover his driving costs.

It was a pile of moments like that one that kept Brusson and his team believing in the BlaBlaCar model. "If you have no proof point, I guess you probably get desperate after a while because you have no social proof point. But if you do, you realize, we are on the right path."