How to Make Your Business Dream a Reality

Coming up with ideas is easy. Executing on them is the hard part. These tips from Scott Belsky can help get you started.

By Tim Beyers
October 18, 2010
Opinions expressed by Entrepreneur contributors are their own. 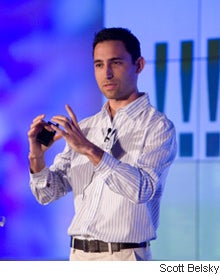 Scott Belsky knows why you don't get things done. You have too many ideas. Belsky, 30, author of Making Ideas Happen (Portfolio, 2010), argues that most entrepreneurs suffer from idea-to-idea syndrome, jumping from one big idea to the next while executing none.

Startup failure rates suggest he's right, and he's built a business to address the problem. Belsky is the founder of Behance LLC, a firm in New York City which operates a networking website for creative professionals called The Behance Network, a tip site for productivity junkies called The99Percent.com, and sells web-based productivity software based on the Action Method.

The Action Method breaks work into a series of steps represented by verbs that specify the next things to be done in executing an idea. Write the plan. Ship the product. Invoice the customer. Here are Belsky's three tips for using the Action Method to create a company that executes.

Uniting Against Idea Overload
Belsky isn't the only business thinker who sees having too many ideas as potentially toxic. In addition to Behance's networking group, the company also hosts a popular productivity think tank called The 99 Percent, a tribute to legendary inventor and entrepreneur Thomas Edison, who famously quipped that genius is "one percent inspiration, 99 percent perspiration."

This same community also gathers annually at a conference attended by many of the business elite, including venture capitalist Fred Wilson, partner at Union Square Ventures and early investor in Twitter who spoke at last year's confab. The next conference is scheduled for May 5-6, 2011, at the Times Center in New York City. Idea generation will play no part in the agenda.

"Most entrepreneurs focus more on the ideas and less on how they organize themselves for action," Belsky says. To him, and his inspiration, Edison, making ideas happen is all about the other 99 percent.

Are Your Customer Relationship Management Techniques Up to Par? Ask Yourself These 3 Questions