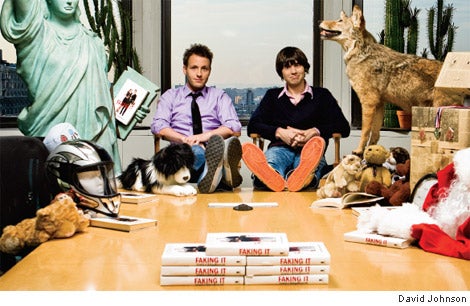 Josh Abramson and Ricky Van Veen's story starts a little too perfectly; more like a standard issue romantic comedy than an unlikely success story. They would have never written it themselves, that's for sure. That is, unless the punch line involved something much more ironic or slapstick than two college kids crafting a million-dollar business by posting videos of drunken dorm room charades online. They couldn't have known that day in junior high, when they first met and shared a laugh over a Saturday Night Live clip that Van Veen had taped and surreptitiously shared with Abramson, that together they would eventually become the little-known pioneers of a revolutionary industry. It was a more innocent time, before sites like YouTube and Hulu were household names and words like viral video and user-generated content had yet to be uttered.

Now, almost 15 years later, the founders of 1999 startup CollegeHumor, a TV-network-like empire of hilarious web content (including original and user-generated videos), games, blogs, columns, several web series, a production company and a show on MTV, still get their laughs--and money--sharing all things funny. However, as Abramson recalls, the catalyst that got them started was neither that day they met in social studies class nor their childhood passion for comedy, but a basic entrepreneurial instinct.

Over the years, they've had to mold themselves from entrepreneurs into comedic geniuses. Ask them how they became who they are today, and they'll probably cite YouTube's rise to stardom and their subsequent scramble to stay relevant.

But you'll probably get more laughs if you just go online ( collegehumor.com ) and see it all for yourself.

Just a Day in The Office
Ten videos into my research for this article, I began to realize what all the buzz was about. I must admit, it only took two videos before my commitment to "research" gave in to pure entertainment and the piles of work on my desk remained tilted at the corner. Though these guys are clearly all about the college crowd, there's hardly a funny genre to be missed in their hilarious collection of webisodes.

The one I can't stop watching is called "Bug" (from CollegeHumor's "Hardly Working" series). It starts with the company's editorial manager spotting a bug on her desk and quickly escalates into an equipment-smashing free-for-all, rivaling the famous fax machine torture scene from Office Space. "One of the things that's become very popular in videos is taking broken office equipment and breaking it more," says Abramson. "I'll be sitting at my desk on the phone or interviewing somebody or having a meeting, and then I'll see somebody take a swing at a telephone, hitting it across the room."

This is a fairly standard workday occurrence for Abramson, 27, and even more so for Van Veen, 28, who oversees content for the site and often has cameos in its original web series, which are often filmed in the pair's New York City office.

Over the years, Abramson and Van Veen have done a lot to get College-Humor in front of viewers. Not that they have ever really fallen on hard times. Even at age 18, when they launched the site as a way to earn money for beer and clothing without having to stoop so low as to work at the college library, success came fairly easily. Says Abramson, "On our third month, we got a check for $8,500 from the company that was selling our ads--$8,500 in one month for two 18-year-olds starting a little website is pretty crazy."

CollegeHumor's founders broke the mold--a couple of times--when they built and reinvented the site. But it wasn't the only venture that proved Josh Abramson and Ricky Van Veen's ingenuity and unique ability to capitalize on the latest trends. Here are a few of their latest and greatest ventures, along with the lessons that inspired each launch.

• BustedTees: Perhaps the most popular of Abramson and Van Veen's side ventures, this site, which was launched in 2004 and is devoted to screen-printed T-shirts referencing funny moments in pop culture, has all the makings of a modern gold mine: T-shirts, humor and a customer base of eager young people looking to showcase their brand of funny. After some success with a similar e-commerce venture, Abramson explains, "we realized that we should probably try to start another e-commerce business [selling] a unique product that we could easily market to our audience on CollegeHumor."

• TodaysBigThing: Sometimes the simplest ideas turn out to be the biggest successes--look at Google. TodaysBigThing, which now has about 1 million unique users each month, makes searching for the best viral videos of the day a cinch by offering one gem each day and cataloguing the rest. "There are now so many places to go and watch funny/interesting videos on the web, and so much content being made on a daily basis, that it has become completely overwhelming for people to find the best stuff," Abramson says. "Our idea with TodaysBigThing was to have a super-simple site that only featured one main video per day to make it easy for users to find what we thought was that one thing they needed to watch."

• Vimeo: While YouTube stole much of Vimeo's thunder, it hasn't completely fallen by the wayside. Think of it like Flickr for videos. Users can set up their own profile and post videos, effectively building their own channel to showcase their life imitating art or art imitating life. "Vimeo was the first site that allowed users to upload videos to share with the world," says Abramson. "With Vimeo, it was never our intention to allow users to upload copyrighted materials from other content creators, which was the key difference between us and YouTube in the early days."

And it got better: Just six months after they launched CollegeHumor from their respective dorm rooms at the University of Richmond and Wake Forest University, "we had an offer on the table from a company called eFront," Abramson says. "They wanted to buy CollegeHumor for $9 million." The pair turned down the deal for fear of the buyer's financial stability (sure enough, the company went out of business within the year), but it got them thinking that perhaps CollegeHumor had tapped something huge, something that could potentially change the future of web content. What they didn't realize was that something would soon metastasize into their greatest challenger yet: YouTube.

December 2005 will be a month that lives in infamy for Abramson and Van Veen, no matter how much they've resolved to move on. When I ask Abramson how he and Van Veen felt the moment they realized YouTube had taken over, he says, "We weren't instantly aware of how powerful they were. Obviously we've always had some competition. But it wasn't until there was one player that had all of the same content on the user-generated side that we realized we were going to have to reinvent ourselves to sustain an audience."

While there was no one moment that defined YouTube as the ruler of user-generated content, most experts, including NBC Universal general counsel Rick Cotton, agree it was that December's clip of SNL's "Lazy Sunday" skit that led the parade. But while YouTube was celebrating, CollegeHumor was reinventing itself. And what resulted brought CollegeHumor to the top of web innovation once again.

Selling Candy Corn
In February, CollegeHumor premiered its new show on MTV. The trailer alone, a mashup of sarcasm, slapstick, pranks, nudity and just about any other kind of comedy you can imagine, is proof of how much they've changed since 2005--and just how funny they've become.

Part of it comes with the territory. Until a couple years ago, none of CollegeHumor's 20-some employees were over age 26, and the office culture was--and continues to be--more dorm room party than cube farm grind. Its recruitment video is a four-minute lip synch to "Flagpole Sitta" by Harvey Danger, and its office parodies, "Hardly Working" and "Jake and Amir," which take place in its spacious, sunlight-filled Park Avenue office, are enough to make even the most removed college alum jealous.

The other part comes from Abramson and Van Veen's unbending creativity, which has spurred them to launch venture after venture in hopes of keeping their entrepreneurial dream alive. "There's been at least 10 more [ventures] that we started that you have never and will never hear of because they didn't work," says Abramson. "But sometimes you have to throw a lot against the wall and see what sticks, and we did a good job of that."

Despite their other successes, it was their ingenious plan to begin producing their own content for CollegeHumor, rather than relying solely on user-generated material, that really put them at the top of viewers' watch lists.

So how did they get to be so funny? The pair chalks it up to something Van Veen calls "candy corn." "Candy corn is something everybody is familiar with; everybody has had candy corn, but nobody really talks about candy corn and nobody thinks about it unless it's in front of them," Abramson says, listing off a ton of original CollegeHumor videos that adhere to this credo: a spoof of the game Street Fighter, the self-explanatory yet painfully true "The Matrix Runs on Windows," and a mock Steve Jobs presentation called "The Apple 'i.'" "These are things people are familiar with and feel a connection to because they either grew up with it or it had a piece of their life for some period of time," he says. "We have found that this is a great way to get people interested in something."

It's this kind of ingenuity and speedy evolution that's earned them lots of attention from investors, buyers and the like. In August 2006, mere months after the rise of YouTube and the dawning of CollegeHumor's colossal reinvention, web media conglomerate InterActiveCorp bought 51 percent ownership in the company. That same year, Abramson and Van Veen brought in sales of $6 million.

While these days it's less about their entrepreneurial ventures and more about homing in on their comedic genius and management skills, Abramson and Van Veen still play an active role in shaping the site. And Abramson admits it's nice to have a couple "adults" hanging around. "Coming up with ideas for funny websites and figuring out how to make money on the internet is one skill you can figure out on your own," he says. "But there's a lot of fundamental business practices you're not going to pick up by osmosis. So having someone with real experience looking over your shoulder is hugely valuable." So is having a team of young creatives floating around--even when they're trashing office equipment for a one-minute clip.