With his incubator in Dallas, longtime restaurateur Philip Romano is looking to usher in a new generation of restaurants.

In 2010, Joe Palladino's phone rang. On the other end was Philip Romano, his partner in three Dallas restaurants, asking him to come out to the undeveloped 65-acre lot Romano co-owned in West Dallas, Texas. The restaurateur said he had something to show his friend. Palladino arrived to find Romano excitedly sketching out a development plan -- a row of restaurants side-by-side near the Trinity River that bisects Dallas.

Palladino, a fellow restaurateur, was astonished at how quickly the plan evolved before his eyes. "He's like a mad scientist, just putting stuff together," he says of watching his partner of 15 years work. What Romano was inventing on the spot was a restaurant incubator, Trinity Groves, which began operating in 2012 and so far has two restaurants serving customers, with more expected to open this year. For the remaining 20 or so spots in the incubator, the founders have chosen 12 more restaurant concepts from about 270 applications. 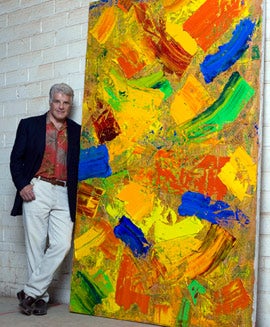 Over more than four decades, Romano has launched dozens of restaurant concepts, including national chains such as Fuddruckers and Romano's Macaroni Grill. "[He] is among a small group of restaurateurs that elevated restaurant creation to a form of art," says Robin Lee Allen, executive editor of Nation's Restaurant News, the industry's top trade publication.

Long famed for his creativity in the industry, Romano is now, with his incubator, becoming a catalyst for the inventions of a new generation of restaurateurs.

At 73, Romano is vigorous, signs of the Army boxer and college karate instructor he was still visible in his large hands and broad shoulders. He lifts weights regularly and runs in the hills near his Dallas home. "The hardest thing about getting old is acting your age," he says. He is still hungry.

"Even at his age, he never stops absorbing and learning," says Palladino. Romano is known for sketching out his restaurant ideas using pen and paper, revising them often, ever conscious of what customers will see when they walk in the door. "He's really good at mapping out a concept and understanding exactly how it needs to look, how it needs to be set up -- all the way from the bathrooms to the front entrance," Palladino says. 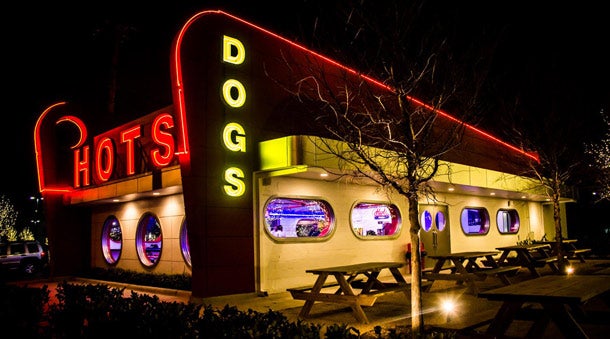 Hofmann Hots, a sort of Fuddruckers for hot dogs, was the second restaurant launched by Romano's incubator. Each restaurant gets 2,500 square feet of interior, plus a patio, and up to $500,000 of startup capital.

Sometimes Romano finds a location first and that gets him thinking about what kind of restaurant would fit there. Sometimes it's the other way around. "His view of these things comes to him as an image. He's very visual," says Stuart Fitts, a fellow investor in the Trinity Groves development. If you tried to explain a restaurant concept verbally to Romano, it might not register, Fitts explains, but if you gave him "a drawn-out illustration of what it would look like, he would get it instantly." The average gestation period from initial concept to grand opening, is about six months, Romano says.

One of his early successes, Fuddruckers, operates more than 190 locations across North America, including five in Puerto Rico. Founded in 1979, the fast-casual franchise was the precursor to the "new burger" craze that now includes Shake Shack, Five Guys, In-N-Out Burger and other popular chains, Allen says. Romano sold the chain in 1988 to found Romano's Macaroni Grill, a casual-dining Italian restaurant. Hospitality company Brinker International bought the franchise rights to Macaroni Grill in 1989 and has grown the brand to more than 200 locations worldwide.

"The industry regards him as one of the great creators," says Allen, noting that his success is enviable in an industry that many dream of entering but in which new ventures often fail.

On the walls of the West Dallas Investments office hangs a vision of the future of Trinity Groves.

But failure, if you learn from it, can to lead to success. Romano says he has learned plenty from concepts that tanked. Among them was a healthy-eating hibachi grill called Styx that failed to take off in San Antonio in the mid-1980s. Customers loved the food, but it was too expensive for the average pocketbook in the area. Worse yet, too few people there were invested enough in the concept of healthy eating to sustain the concept. He closed Styx, chagrined, he says, by his "piss-poor marketing," his ignorance of the people he was serving.

In the late 1990s, he launched a location of his EatZi's concept in the basement of the Macy's flagship department store in Manhattan. The hybrid supermarket-restaurant was a poor culture fit. New Yorkers were rarely willing to bring restaurant food onto buses and subway trains, which was fatal to the EatZi's concept, which depends on take-out purchases. "I can't fight New York. I can't fight the culture," he says he realized. After six months, he shut it down, though EatZi's lives on today with three locations in Dallas.

Related: Fresh Off the Boat's Eddie Huang on Keeping It Real

With the new restaurant incubator, he expects to receive a real-time education in customers' tastes. Trinity Groves is owned by West Dallas Investments, a company Romano, Fitts and another man, Butch McGregor, formed in 2005 to begin buying up land in West Dallas. Cut off from downtown by the Trinity River, this part of the city is impoverished and has historically been neglected by developers. Settled decades ago by the workers of nearby cement factories and oil refineries and poor farming families attempting to escape the Great Depression, West Dallas is the place where the outlaws Bonnie and Clyde met and fell in love, and from which they dreamed of escaping.

In buying land here, Romano and his partners were placing a long bet on the future of Dallas development. By the time the Margaret Hunt Hill Bridge opened last March, connecting West Dallas to the rest of the city, that bet was starting to look like a smart one.

"We're doing it a little bit bass-ackwards," Fitts says of the partners' decision to start development with a 15-acre restaurant project. But the partners believe that turning West Dallas into a hot dining destination could be the first step toward a neighborhood turnaround.

Each Trinity Groves restaurant gets up to $500,000 in funding and 2,500 square feet of interior space, rent-free, plus a patio. In return, West Dallas Investments gets six percent of its gross revenue and 50 percent ownership. As to annual revenue, the partners have set a floor at $1.2 million; anything less is unacceptable. And while Fitts says they won't let any existing chains open locations in Trinity Groves, every restaurant that comes in should have the potential to become a chain, either regional or national, in its own right. 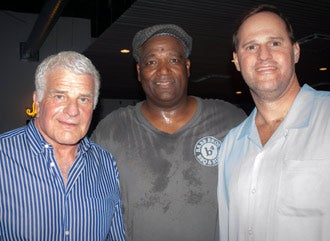 Phil Romano stands with his partner, Stuart Fitts, and with Mike Babb, co-owner of Babb Brothers BBQ, on the opening night of Babb's restaurant in November 2012. Babbs Brothers BBQ was the first restaurant launched by Romano's incubator.

Babb Brothers BBQ & Blues, the first Trinity Groves restaurant, opened last November. The initial vetting process consisted in part of Mike Babb, one of three brothers who run the barbecue joint, bringing in food and homemade barbecue sauce for Romano and his partners to sample.

"We loved his food," Fitts says. Finally, during the third interview, Romano sat Babb down to break the good news: they had decided to fund the restaurant. They would provide $500,000 and direction on how to spend the money. "Are you wearing old pants?" he asked Babb as a precaution. And then, delivering the punchline, his blue streak showed itself: "Because when we tell you what we're gonna tell you, you're gonna shit in these."

When not designing restaurants or funding others' ideas, Romano puts his energy into painting, a pursuit he took up more than 30 years ago. He paints large vibrant works -- two of which hang in Fitts's home -- inspired by Gerhard Richter, Jackson Pollock and other Abstract Expressionists.

"I want to do things that never existed before," Romano says. His plans for the incubator spring from the same impulse: to leave a lasting mark on the world while there's still time. "I'm motivated by fear," he says. "The whole thing could collapse at any moment. That's an everyday thing. You got to realize that you're not invincible."

Take risks, then reap the rewards.
Whether it's a piece of undeveloped land or a new invention, you should take risks when necessary to seize opportunities. Romano once provided $250,000 in funding -- against the counsel of his accountant and his lawyer -- for a heart stent that became the industry standard and netted him about $180 million. What's more, two of these stents now reside in his own chest.

Invest in 'new people.'
Because he wants every business he starts to have a future, Romano focuses on appealing to what he calls "new people" -- young people between 16 and 32 years old who have a taste for new trends and new experiences.

Don't get ahead of yourself.
Many new restaurateurs overbuild and run out of capital. To avoid this mistake, study how major businesses grew so large, and then run yours the way those operated in their early days. Also, seek advice from successful restaurant owners. Buy them lunch in order to pick their brains if you have to, Romano says.