The Best and Worst States in America for Crowdfunding

Crowdfunding lives and dies with the willingness of the crowd. Ergo, if you are looking to raise money for your startup with crowdfunding in the U.S., you are going to have the best chance of success in Washington, D.C. And you are probably going to have the hardest time in Mississippi.

That's according to a new report on crowdfunding by The Crowdfunding Centre, a London-based industry data analysis firm and Crowdfund Capital Advisors, a U.S.-based, for-profit advisory organization.

The ranking -- known as the JOBSIMPACT Small Business Crowdfunding Index 2014 -- explores the best and worst areas in the U.S. for crowdfunding and offers an analysis of how many jobs are generated in each locale. The ranking relies on 40 different metrics, including new project/company starts, total number of projects/companies, percent of fully funded projects/companies, average amount raised and total amount raised.

So far, crowdfunding has been adopted in pockets, primarily in urban areas and states home to those large cities. "We can see straight away that there are one or two truly stellar areas, such as Washington, D.C., and San Francisco, where this new entrepreneurial ecosystem has taken hold, showing what it's capable of," aid Barry James, founder and CEO of TheCrowdDataCenter.com, in the report. "But there're whole cities and states that look more like a desert and it's, paradoxically, in these that the most pent-up potential most probably exists."

Here's a look at the rankings of the best and worst states in the U.S. for crowdfunding. (Note: the ranking treats D.C. as a state.)

Throughout the U.S., crowdfunding will create 40,000 jobs in 2014, according to the report. That number would be much higher if government regulators could finalize rules for equity crowdfunding for unprofessional investors. Equity crowdfunding differs from donation-based crowdfunding in that it involves an entrepreneur exchanging a piece of his or her company for equity.

In April of 2012, President Obama signed into law the JOBS Act -- an acronym for Jumpstart Our Business Startups Act -- and changed the existing law, which allows only accredited investors to participate in equity crowdfunding. The Securities and Exchange Commission has been tasked with writing rules for implementing the law and as of yet, the regulators are still in process. 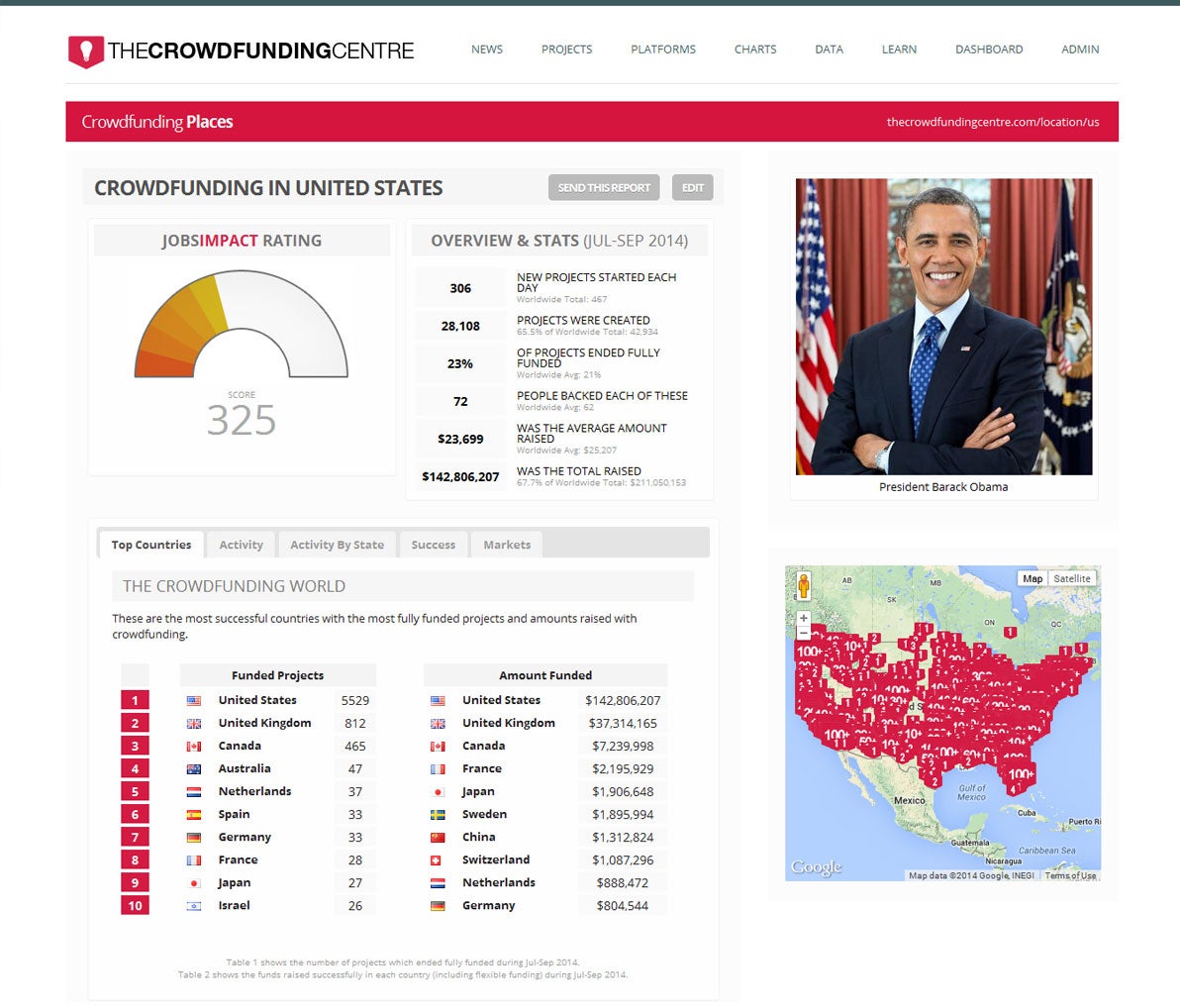 In other countries, like the United Kingdom, equity crowdfunding for unprofessional investors is already legal. "While we in the U.S. have been waiting for the SEC, the U.K. has seen growth rates far faster than ours at 350% or more," said Jason Best of Crowdfunding Capital Advisors.

When the SEC does finalize rules expanding the scope of crowdfunding in the U.S., the benefit of crowdfunding will accelerate, industry advocates argue. "This is the best opportunity in our lifetime to empower tens of thousands and, if at least some of the barriers are removed, ultimately millions of Americans to take control of their own lives, create and build their own businesses and achieve their dreams. To change the game forever to empower us all. This, after all, is the American Dream" said Sherwood Neiss of Crowdfunding Capital Advisors.

Have a look at a snapshot of the JOBSIMPACT report for the U.S. and New York state, excerpted and embedded below. 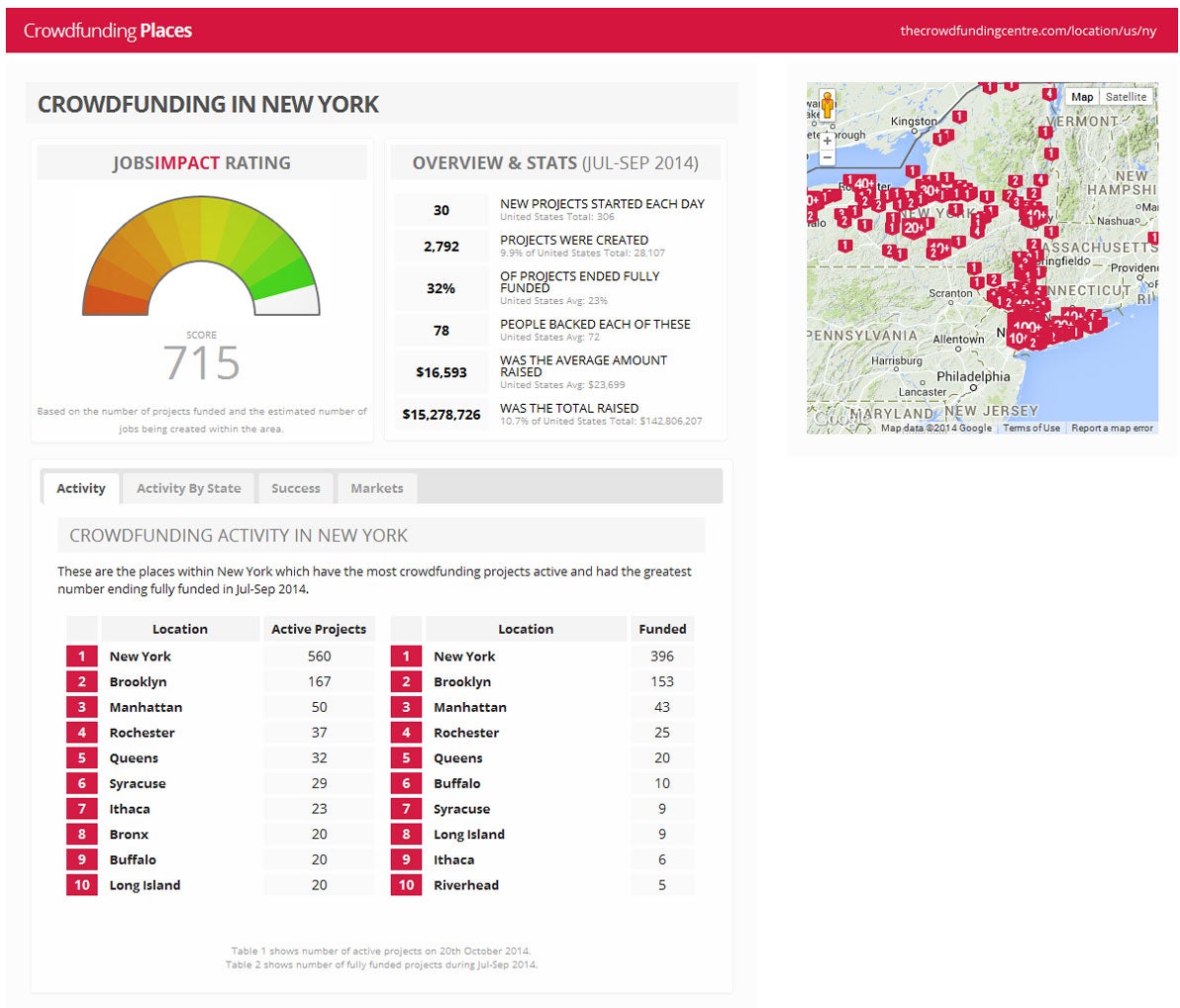