"Papa" John Gets His Car Back 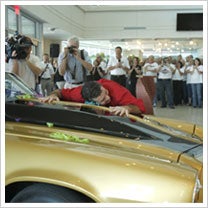 Entrepreneurs often have to make tough sacrifices to get their businesses off the ground. For John Schnatter, it was his 1971 Z28 Camaro. He sold the gold-and-black car for $2,800 in 1983 and used the money to save his father's tavern from closing and start his own business: Papa John's pizza restaurant.

Twenty-five years later, it's obvious that the sacrifice paid off--big time. Papa John's has grown to over 3,000 locations worldwide, and the company ranked #10 in our 2009 Franchise 500. But Schnatter never forgot about his beloved Camaro, and never stopped dreaming that someday he'd get it back.

So in celebration of the franchise's 25th anniversary, he spent the summer on a road trip, connecting with franchisees, employees and customers, and spreading the word about the search for his long-lost car. It was great press for Papa John's; plenty of people could relate to the nostalgic power that one's first car holds. Of course, it also helps that Schnatter was able to offer a $250,000 reward for the car's recovery.

Yesterday Schnatter's quest ended; the current owner of the car was discovered living less than 200 miles from Papa John's Louisville, Kentucky headquarters. Once the Camaro's identity was verified, Schnatter happily parted with the $250,000 in exchange for the car that helped him get his business started. And in celebration, fellow Camaro owners can get a free pizza from their local Papa John's today.

Though he's happy to have this piece of his past back for personal reasons, Schnatter hopes that his story will serve as inspiration for aspiring entrepreneurs, too. "The foundation of Papa John's was built on my decision to sell the Camaro," he said. "And, perhaps it can serve as proof to others that hard decisions today can pay off for you later, if you're willing to believe in what you are doing."

The Secret to Annuities? What the Heck Are They?

Upgrade Your Job: How the Labor Shortage May Benefit You