How the Fortune 500 Uses Social Media

By Mikal E. Belicove November 16, 2010
Opinions expressed by Entrepreneur contributors are their own. 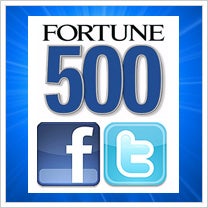 Just out from the Center for Marketing Research at the University of Massachusetts Dartmouth is a study targeting the use of social media by America's largest companies -- the Fortune 500. In particular, the research examines what the big boys are doing when it comes to using blogs, Twitter and Facebook.

And the results show that, as a whole, these top companies -- all of which play a significant role in driving the U.S. economy -- appear less willing to interact via blogs than they do Facebook and Twitter. Only 116 (23 percent) of the Fortune 500 have a public-facing corporate blog, which is one only percent better than last year.

The study, The Fortune 500 and Social Media: A Longitudinal Study of Blogging, Twitter and Facebook Usage by America's Largest Companies (PDF file), conducted by Nora Ganim Barnes, Ph.D., follows similar reports released in 2008 and 2009 by U Mass Dartmouth that looked first at blogging and then a year later, Twitter. The 2010 study was expanded to include Facebook.

To measure the number of Fortune 500 firms with Twitter accounts, the report considered only those who posted a "tweet" within a specific 30-day window (between August and September 2010). The results were dramatic -- up 35 percent from last year's report -- with 298 of the top 500 (60 percent) having active Twitter accounts. That included nine of the top 10 corporations (Wal-Mart, Exxon, Chevron, GE, BofA, ConocoPhillips, AT&T, Ford and HP.) Only JP Morgan Chase missed the mark in the top 10 list.

Of the 298 active Twitter participants, the study did find that only 103 consistently responded with replies to questions or "retweets" within 72 hours.

It's surprising to me that so many of the Fortune 500 companies continue to ignore the clear and obvious benefits of blogging. As I noted in 5 Reasons Why You Shouldn't Abandon Your Blog for Facebook, choosing to replace a company-branded blog in favor of a presence on Facebook or Twitter only is a lousy decision.

Business blogs offer innumerable benefits over Facebook and Twitter. Sure, you want your business fishing where the fish are, so to speak, which is why it'd be foolish to ignore the 550 million consumers currently using Facebook, and the 150 million or so registered users of Twitter. But to actively choose to place all of your company's social capital into someone else's basket fails to recognize the branded opportunity associated with a well-conceived and managed corporate blog.