By Diana Ransom September 15, 2011
Opinions expressed by Entrepreneur contributors are their own. 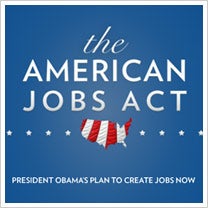 In President Barack Obama's jobs speech last week, he hinted that startups aiming to raise crowd-sourced funds might soon have fewer obstacles to jump and that small government contractors could expect to get paid quicker. He also called for passing patent-reform legislation. Though it's only been a week, some of those provisions are already under way -- even without Congressional approval.

Here are three Jobs Act proposals that were either given a green light or close to it:

Paying small government contractors faster:
Yesterday, the President announced his new "QuickPay" plan for helping small companies that do business with the U.S. government get paid in 15 days instead of 30, after they receive an invoice. The program -- which is open only to prime contractors, or those who work directly with the government -- goes into effect immediately.

"I'm ordering all federal agencies to make sure those small business owners get paid a lot faster than they do now," Obama said speaking at North Carolina State University in Raleigh, N.C. "That puts more money in their pockets quicker, which means they can hire folks quicker."

Reforming the U.S. patent system to speed up processing:
As part of the Jobs bill he proposed last week, the President called on Congress to pass comprehensive patent reforms. Yesterday, the administration announced that President Obama would sign the long-debated patent reform bill into law on Friday.

Though the bill has been panned by a number of entrepreneurs and small-business groups, the reforms are widely seen as helping free up the backlog of applications at the U.S. Patent and Trademark Office. Some estimates suggest that there's a current three-year-long backlog of 700,000 applications waiting for examination.

Loosening restrictions on crowd-funding:
Separately, a congressional committee led by Rep. Patrick McHenry (R., N.C.), today expects to hold a hearing on how to clear the way for fast-growing companies and entrepreneurs to use crowd-sourced funds to raise business capital. Crowd-funding is a relatively newer way to raise capital from many investors in exchange for small amounts of ownership in a company.

Although this initiative is hardly a done deal, McHenry does plan to introduce legislation in the coming days that would make it easier for crowd-funded ventures to succeed. Among other things, McHenry's bill would exempt privately traded companies that raise crowd-funded capital from the Securities and Exchange Commission's shareholder cap, which requires companies with more than 499 investors to disclose financial information. Facebook famously came under fire for nearly defying this provision in January. At the time, many speculated that the social network would be forced to file a public offering as a result.

Which Jobs Act initiative would you like to see get a green light? Leave a comment and let us know.

These Are The Ten Biggest Homebuilders Companies