Marcia Kilgore, creator of lifestyle and beauty brands, shares her fearless approach to business and life. 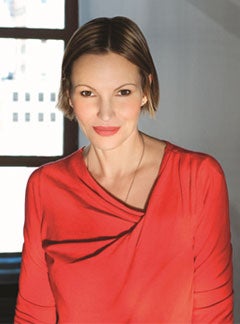 At first blush, Marcia Kilgore exudes the whimsy of a doe-eyed waif. Beneath the surface is a buckled-down businesswoman with a demanding yet optimistic nature. It would lead her to a trifecta as a serial entrepreneur, notably selling a majority stake of Bliss Spa to conglomerate LVMH for $30 million just three years after starting up.

Kilgore grew up in a working-class, suburban town of Outlook in Saskatchewan, Canada, and was "just like every other kid on the block" until her father died. She was 11. "It was so early, I think it brought on a greater sense of responsibility for myself," says Kilgore, now 43. By her teens, she was already exhibiting the tendencies of a serial entrepreneur, juggling three part-time jobs in high school. She ultimately moved to New York and worked as a personal trainer, but was embarrassed by her acne-prone skin. In her quest to fix her own problem, she launched Bliss Spa in New York in 1996, which grew into a chain of spas and a wildly popular product line.

After selling Bliss to LVMH in 1999, entrepreneurial restlessness would kick in. She moved to the U.K. and started a cosmetics company, Soap & Glory, in 2006. The following year, she launched FitFlop footwear. As if running multiple companies weren't enough, Kilgore also writes the marketing copy and dreams up product names for both brands, often with a precocious twist like Soap & Glory's 'Sexy Mother Pucker' lip gloss.

As Kilgore sits down for this interview with 'Trep Talk, her tone is both whimsical and wise. She shares views on why it's crucial to nip problems in the bud, get everything in writing and think twice before saying you're too busy. Edited interview excerpts follow.

Early signs of creativity: I remember making up a slogan for nail polish when I was about 9, while flipping through women's glossy magazine. I was hearing the phrase 'tickling the ivories,' and thinking of being tickled pink, and then thinking how you could call a nail polish 'tickled.'

Marketing influence: Dr. Seuss was the greatest and he had no boundaries, really. He was ahead of his time and so simple in a fun, unbridled way. He has affected me in the tales that he tells and the way I write [marketing] copy.

On tackling problems early: If you have an issue with a product and you manufacture it anyway, the problem will only become bigger. You may think that it'll be easier to just launch it, but remember you have to sell that product and if you know there's something wrong or slightly off, so does everybody else. If you don't have 100 percent confidence in your product, it's better to miss a deadline than to own 20,000 of something that isn't quite right.

The Making of a 20-Something Multimillionaire Serial Entrepreneur

Mother knows best: Growing up, if I complained about something my mom would say, 'You know what, other people are a lot worse off then you are. Some have no legs; stop complaining.' It was pretty harsh. But I learned not to wallow or say, 'Woe is me.' I'm not going to sit around talking about any slight inconvenience. You solve problems as they come at you. You may have a great week and then a tough one. You just have to get used to it because it'll never be perfect.

On dealing with rejection: You can't think of it as a rejection of yourself or self-worth, it could just be that your presentation is not right for that person at that time. Instead of hearing 'no,' listen to 'why not,' so you can hone your offer.

Startup tip: Get everything in writing, especially with business partners. When you're starting out, things can be quite friendly and exciting, but people's memory can change due to money. You can say, 'Hey, so we don't forget what the original deal was, and I have a bad memory, let's just write it down together.' Obviously, better to have a lawyer do it, but at least have some written recollection that you are partners, who's responsible for what, and how much money each of you put in. It seems basic, but people still don't put things in writing.

Favorite book: The Road Less Traveled, by M. Scott Peck. One of the book's lessons is when you go down one path, you are consciously forfeiting the other path -- and to be okay with that is really profound. I had an 'aha' moment when I realized that. I was always too busy, but it was really what I chose to do that made me not have time for other things. When most people complain that they couldn't do something, it's not that that they couldn't, they just decided to do something else instead.

I'm inspired by… musicians. There's something so incredibly passionate about being able to make great music. A handful of my favorites are the Beatles, Gillian Welch and David Rawlings, Ray La Montagne, Paolo Conte and Sam Cooke.

Go-to attitude adjuster: Sam Cooke's 'A Change is Gonna Come.' You can hear the pain and the passion -- and also the hope. The tone is so pure.

On outwitting counterfeiters: After filing design and trademark patents, look at your pricing. Don't leave a gaping hole in your price structure that allows people to come in and drive a truck through that hole and take the market underneath you. If you have a competitive product, and counterfeiters can't bring the price down that much, they're less likely to go for it.

Three people I'd like to take a walk with: Winston Churchill, who was brilliant, funny, charismatic, and full of amazing one liners; the late French philosopher Jean Paul Sartre; and I.M. Pei, the architect who designed a controversial glass-and-steel pyramid for the Louvre museum in Paris. He was able to take futuristic and modern [concepts] and integrate them into iconic ancient structures in a beautiful way -- and without fear of his critics.