From Chicago CEO to 'Trop Rock' in Key West

Howard Livingston's move from Chicago to Key West, Fla., was part of a lifestyle makeover. His old wardrobe was the first thing to go.

"I had whole closets full of suits and dress shirts and ties and slacks," says the former co-owner and CEO of a firm that made diesel-engine parts. The dapper attire went straight to the Salvation Army. "It was an act of freedom," Livingston says with a laugh. "I decided, 'I'm going to go down there in flip-flops and T-shirts and see what happens.'"

That wasn't all he decided. Livingston, who made the leap in his mid-50s, deliberately downshifted from a demanding corporate grind to the laid-back pace of the Keys, a destination point every year for thousands of "snowbirds" fleeing the icy winters of the East and Midwest. Those who live in the Keys -- where mild winter days average above 70 degrees -- tend to work busily during the seasonal influx of tourists and take vacation time off during the hot, humid summers, as Livingston now does.

Livingston's six-months-on, six-months-off schedule includes summers devoted to swimming, boating and vacations. During the winter he pursues his second-act careers: singing and being a television host.

"Winters here are incredible," he says. "People literally come from all over the world. There's a stark difference between the winter and summer. There are probably 20 times more people here on a given day in the winter than there are in the summer. The summer is what we call 'slack time.' You can kick back and catch your breath."

An avid songwriter, Livingston fulfilled a longtime fantasy when he arrived in Florida by starting a band -- the Mile Marker 24 Band, named for his location along the highway that cuts through downtown Key West. The band has been a success. In seven years, Livingston has recorded six albums and become a regular act at festivals and charity events.

During fundraising performances for KOA Care Camps, a program that sends seriously ill children on week-long camping trips, Livingston revs up an outboard motor to mix a small ocean of margaritas. He auctions off the first drink for impressive sums. "The record is $10,000," Livingston says. "Last year we raised $55,000 for the kids." 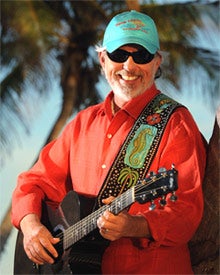 The band is slated to play alongside Poco and Blood, Sweat & Tears at a fundraiser in March, Livingston says. With Livingston singing and playing guitar, the group's style is what the locals call "Trop Rock," a tropical melding of rock, reggae and other Caribbean strains favored by fans like Dale and Peach Hench, who make an eight-hour drive to Key West seven or eight times a year to enjoy the sounds.

"They sing about oceans and vacations -- escapist music similar to what Jimmy Buffett sings," says Dale, who labels Livingston "one of the warmest and most genuine people we've ever met, as well as a very talented musician. Howard's been gracious enough to let us come up on stage and play our cowbells. He's that type of guy -- he invites people to participate in what he's doing."

The success of the band earned Livingston, now 60, a second wintertime gig, hosting a local TV show known as Key West Time. The series, created by the Conch Republic Media Group in Key West for satellite and cable television, focuses on lifestyles and recreation in the Keys -- boating, parasailing, hunting for treasure, and the like. Filming for the 13-week series resumes this month.

"He absolutely loves doing the show," says Livingston's wife, Cyndy, whom he met 15 years ago during a visit to Key West and married in 2009. "He's a natural at it. He loves the Florida Keys, and he can talk about everything he loves."

Cyndy Livingston, a former financial controller who gave up that job to help with her husband's careers, deals with everything from the sale of band merchandise to ironing Hawaiian shirts before TV shoots.

In the idle summer months, they like to boat to the tiny, uninhabited islands that make up much of the archipelago. "There are literally thousands of little islands that are accessible only by boat," Livingston says. "You can go 10 or 15 miles and get away from everything. We're in the water or on a boat just about every day."

Key West Mayor Craig Cates, who met Livingston while introducing him at a music festival, has become one of Livingston's good friends. "To me," Cates says, "he looks like the happiest guy in the world."

"Knock on my wooden head, I've never had so much fun in my entire life," he says. "It's truly incredible."

This originally appeared at SecondAct.com.