Why This Tiny Cube Might Be Your Next Office PC

By Jonathan Blum February 24, 2012
Opinions expressed by Entrepreneur contributors are their own. 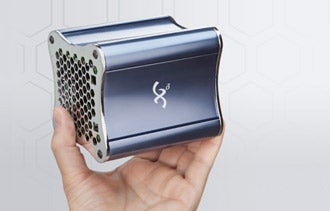 One startup is reimagining the traditional business PC, and the result can be a useful new computing option for entrepreneurs.

Salt Lake City-based Xi3 Technologies has been quietly developing a computer that's roughly four inches by four inches, or about the size of a grapefruit. But what sets this gadget apart from other portable PCs is that the Xi3 splits the core functions of a traditional PC into three separate, easily replaceable components. Think of it as a high-tech equivalent to Ford's model T, which was considered so simple that anyone could repair it.

Each Xi3 device is made up of three separate modules: one for the processor, one for how the unit communicates on a network and a third for power. This means you can upgrade any of these components -- say, to swap out for a faster processor -- with little effort. Just unscrew the back panel, slide out the required part, put the hatch back on and you're done.

Being able to conveniently access individual parts of a computer allows users to upgrade the device as software needs change or when specific parts fail. Entry-level models cost $850 and come with 16 GB of memory built in. Expandable drives are optional and cost extra.

Here are some additional reasons the Xi3 just might find a place in your business:

Size and adaptability: The Xi3 can fit anywhere: crowded desktops, sales kiosks or attached to a high-definition display to support interactive advertising. Dedicated and expensive server rooms aren't necessary to house these PCs. They can be stacked densely in small racks in just about any room or closet.

The Xi3 can also be used as a virtual work station. The company sells an outboard processor ($250) that allows four users to work on a single device. Monitors are not included.

And it can save on electricity costs. The Xi3 requires only 20 watts of electricity to operate compared to most other units that drain 100 to 400 watts on average.

Durability: The Xi3 is built from a forged metal case, similar to how Apple's Macs are made. And the electronic components inside the Xi3 are a level or two sturdier than what is usually found in entry-level work computers.

On top of that, the company says the Xi3 can last up to 10 years. That's more than double the lifespan of traditional PCs.

Bottom line: Despite its cache of convenient features, the Xi3 isn't perfect. Possibly the Xi3's biggest downfall is that it isn't easily portable like a notebook or tablet. These units still need full wall power, a monitor, a keyboard and network access.

Also, at $850, it is roughly double the cost of a standard work desktop. But you can potentially save money over time as the PC could live longer than those traditional computers.