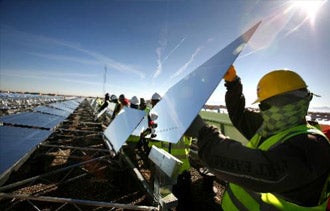 The government has selected a clean-technology investment company as its first partner in an effort to support innovation and job growth in areas deemed "critical" and a "national priority" like low-income regions, clean energy and education. And Citi has stepped in as the lead private investor in the deal.

The U.S. Small Business Administration announced yesterday that it had selected SJF Ventures III, a venture-capital firm with offices in New York, San Francisco, and Durham, N.C., as its first national Impact Investment Fund partner. SJF Ventures picks companies involved in reuse and recycling, sustainable agriculture and food safety, among others, to invest in.

The Impact Investment Fund is a program launched as part of Startup America, the White House’s public-private partnership, which aims to drive $1.5 billion in small or startup, fast-growth companies over the next five years. The SBA will invest $1 billion towards the effort and the rest will come from private investors. The targeted areas of investment for the Impact Investment Fund are either low-income regions or in the clean-tech and education sectors.

And due to certain advantages of the SBA program, more venture capital firms may want to follow suit, driving up the amount of funds available to small, fast-growth businesses across the country.

The Impact Investment Fund’s first location-based partnership was in Michigan, and the SJF Venture III deal is its first sector-based partnership. In Michigan, the SBA partnered with the State of Michigan and The Dow Chemical Company, among others, and together, the partners will provide up to $130 million of investment capital over the next five years to businesses in the state. In the Michigan Impact Investment, the SBA’s $80 million contribution will have to be repaid.

"SJF Ventures III, LP is yet another important new ally in SBA’s commitment to foster small business growth and job creation in emerging sectors," said the government agency’s chief, Administrator Karen Mills, in a statement released yesterday. The idea is to get money in the hands of small businesses that will really drive job growth.

As part of the partnership, SJF Ventures III did not want to take on any government capital. The impact investors that are selected to participate in the SBA's program can choose, depending on their needs, whether it makes sense for them to accept capital from the government. Instead of taking on capital from the SBA, SJF Ventures III opted to be licensed as a Small Business Investment Company, or SBIC, a designation that required the firm to go through a significant application process.

Though the vetting process is arduous, the SBIC designation does provide investment firms significant benefits. For instance, it gives banks an increased sense of confidence in the institution. Citi’s community lending group, Citi Community Capital, led the investment in SJF Ventures III. "You are more attractive to potential bank investors" once achieving the SBIC status, explained Sean Greene, the SBA Associate Administrator for Investment, on a conference call with reporters.

Also, having the SBIC status makes firms more attractive to bank investors because any investments automatically qualify as Community Reinvestment Act Credit. The Community Reinvestment Act requires banks to make certain amounts of investments in their communities according to federal regulations. And finally, a particular section of the Dodd-Frank Wall Street reform and consumer protection legislation called the "Volcker Rule" will make it such that, when fully implemented, banks cannot invest in private funds. SBICs, however, are exempt from this rule.

SJF Ventures III aims to raise $75 million for its Impact Investing fund, but it has not yet reached that full amount. However, the company is ready immediately to invest in companies.