7 Ways You're Wasting Time and Don't Even Know It

By Jane Porter July 31, 2012
Opinions expressed by Entrepreneur contributors are their own. 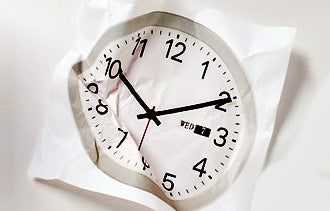 Fourteen months after starting her own insurance agency, Dawn Berry found herself surrounded by stacks of paper. Her inbox was brimming with more than 500 emails that needed to be answered or trashed. And just finding a pen on her cluttered desk became a challenge.

Berry realized she needed to get smarter about managing time and making Provident Insurance Agency in Florissant, Mo., run more smoothly. She hired a productivity coach and saw immediate results. She began completing tasks that would take less than two minutes right away and delegated routine work to her assistant so she could focus on selling. Now, at the end of each day, she has fewer than 50 emails waiting in her inbox. In 2011, by better managing her time, Berry grew her business to a point where she could hire her first full-time employee, making her all the more able to focus on the important aspects of the company. "I have a do-it-now mentality," she says.

If you feel as overwhelmed as Berry did, you may need to rethink how you use your time. Here are seven ways you may be wasting time without even realizing it.

1. You overload on administrative work. If you've spent three hours reconciling a bank statement, you're making poor use of your time. Too often, small-business owners waste time on tasks they don't like or aren't even good at. What's more, they often expend energy avoiding such tasks and then spend more time than necessary doing them, says Cathy Sexton, the St. Louis, Mo., productivity coach who helped Berry. "If we just hired it out, it would be less expensive," Sexton says of tasks like bookkeeping and website maintenance. "It's looking at your time and putting a value on it."

2. You put off quick tasks. If you can pay a bill or schedule an appointment in a couple of minutes, do it immediately. Putting chores aside for later—no matter how mundane—is a common way small-business owners waste time, says David Allen, author of the runaway bestseller Getting Things Done (Viking 2001). People often set emails aside for later, for example, and then have to search for them and reread them. "It will take you more time to remember it later than just doing it now," Allen says.

3. You micromanage employees. Too many employees need their hand held throughout the day, says Jason Jennings, author of The Reinventors - How Extraordinary Companies Pursue Radical Continuous Change (Portfolio, 2012). As a result, small-business owners often waste precious time micromanaging such workers just to make sure they do their jobs properly. If you have to guide an employee through every aspect of the job and he isn't making progress toward working independently, Jennings advises that you let him go. Harsh as it may seem, firing people who are slowing you down may be the best solution for your business.

4. You let daily developments drive you. Putting out tiny fires throughout the day is a big misuse of time, Allen says. Rather than thinking about strategies to expand your business, you're bogged down dealing with every issue that comes your way minute-by-minute. "That's not making good priority decisions about things." To stay focused on what really matters, try to block out time each day for your strategic priorities.

5. You don't have a clear social-media strategy. Limiting the amount of time you spend on social media sites will certainly help your productivity. But even if you devote only one hour each day to social media activity, you will still be wasting time if you don't have a game plan, Sexton says. "Social media is part of your marketing plan. You really need to understand what your desired results are."

6. You try to reinvent the wheel. Hanging onto projects or products that no longer look promising is a big time-suck, Jennings says. "The reason people are stymied and can't get stuff done is because they are constantly reinventing the wheel. They can't let go." Stop and ask yourself, "How promising does this endeavor look?" Be honest with yourself and decide if it's time to drop it and move on.

7. You repeat the same things over and over. Customer communication is important, but if you always have to answer the same questions from different customers, you're wasting time, says Chris Guillebeau, author of The $100 Startup: Reinvent the Way You Make a Living, Do What You Love, and Create a New Future (Crown Business, 2012). Rather than starting from scratch each time, Sexton recommends creating a template for such routine tasks as email responses to common queries, invoices, client letters and meeting agendas.