Obama Regrets Syntax of 'You Didn't Build That' Comment 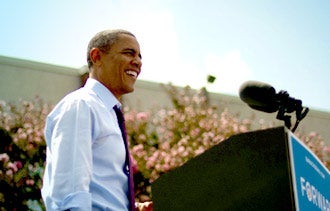 President Barack Obama says that he regrets the syntax -- but not the meaning -- of his now controversial "You didn't build that" comment.

In an interview with a local NBC TV station in Virginia this week, Obama said that Republicans have misinterpreted and misused his comment for political gain.

The GOP has pointed to Obama's remark, made at a Roanoke campaign event in July -- "If you've got a business -- you didn't build that" -- as evidence that he doesn't understand the realities of running a business and doesn't respect the struggles and sacrifices. "We built it" became a theme at the Republican National Convention in Tampa, Fla., last week in a direct dig at the President.

"Everybody who was there watching knows exactly what I was saying. I had talked about how we all have to invest in schools and roads and bridges for businesses to grow, for small businesses to be successful, that there is a part of our economy that is dependent on all of us making common cause," said Obama (see below). "This is an example, I think, of the tendency of the other side to shade the truth a little bit to try to win political points."

Here's what Obama said in context:

"If you were successful, somebody along the line gave you some help. There was a great teacher somewhere in your life. Somebody helped to create this unbelievable American system that we have that allowed you to thrive. Somebody invested in roads and bridges. If you've got a business -- you didn't build that. Somebody else made that happen. The Internet didn't get invented on its own. Government research created the Internet so that all the companies could make money off the Internet."

In this week's TV interview, Obama refuted that he isn't supportive of small business, claiming that any small-business owners who think he hasn't helped them have been listening to Republican political rhetoric without considering his record. He added that his administration has passed 18 tax cuts for small businesses and that government programs have helped small businesses get access to loans when banks were not lending.

"Every policy that we have put into place has been designed to try to strengthen the middle class and small businesses and we are going to keep on trying to do that," said Obama. Tonight Obama will address the nation during the prime-time broadcasting of the Democratic National Convention from Charlotte, N.C.

As an entrepreneur, what was your reaction to President Obama's "You didn't build that" comment? Leave a comment below and let us know.