Get a glimpse of how to use Facebook’s marketing resources to your business’s advantage.
Dan S. Kennedy & Chip Kessler
January 22, 2013 5 min read
Opinions expressed by Entrepreneur contributors are their own.

In their book No B.S. Guide to Marketing to Leading-Edge Boomers and Seniors, marketing experts Dan S. Kennedy and Chip Kessler offer small-business owners a handy guide to targeting the leading-edge boomer and senior market. In this edited excerpt, the authors outline four errors that can crash your well-planned marketing campaign.

There are specific hazards in communicating with and building trust with leading-edge boomers and seniors. Stepping in any one of them, even a little, can sabotage an entire marketing campaign or sales presentation with everything else in it done perfectly. Here are four sand traps to watch out for on the course:

Related: Why Should Your Customers Trust You?

1. Disrespecting their heroes
2. Disagreeing with their predetermined beliefs
3. Missing their frame of reference
4. Disrespect or perceived disrespect

1. Who are their heroes?
Leading-edge boomer women name Oprah Winfrey more often than anyone else. If asked to name a broadcast personality, the majority of leading-edge boomer men name Rush Limbaugh, although Howard Stern registers on the list, too. Overall, Ronald Reagan wins this derby.

Assume you're a financial advisor and your prospect brings up the matter of gold. Because you genuinely believe it is a poor investment (and because you sell annuities), you quickly cite the case against it and emphasize your point by criticizing the “gold peddlers” on the radio like Glenn Beck. Now suppose your prospective client owns gold, bought because he's a committed Glenn Beck listener. Who wins this clash of titans -- you or Glenn Beck?

These are the kind of land mines waiting for you to step on them.

2. Disagreeing with their predetermined beliefs
This is just as dangerous as disrespecting their heroes. In the 2012 presidential race, for example, you can’t assume your conservative Republican client is for Romney. You also cannot assume your wealthy couple with adult children is keenly interested in legacy and estate issues; that is no longer a universal belief of seniors and certainly not of boomers.

As a matter of fact, it’s a bad idea to assume anything. You should test your ad copy and other marketing via surveys, polls, informal focus groups conducted with a handful of your best customers, and direct attempts at selling face to face or to small groups brought together for that purpose, as well as split tests of headlines, offers, and prices via online and offline media.

3. Oops, You Missed It by That Much
If you're of a certain age, that phrase is within your ready frame of reference. It’s one of Don Adams’s catch-phrases from the spy spoof TV show, Get Smart. It’s important to know and understand the frame of reference of your boomer consumer.

Formative experiences for the leading-edge boomer include the Cold War and nuclear threat, the Civil Rights movement, the Vietnam War, the draft, the assassination of JFK, RFK and Martin Luther King, Jr., the sexual revolution, and Watergate. Many boomers were all about achievement, thus optimism, competitiveness, workaholism, and visible success have been important drivers in their lives. All this information tells you how to form effective selling relationships with them. They want to see that you're working hard for them, because they value hard work. They want to know that you are accomplished and recognized for your accomplishment, because they value accomplishment and recognition.

It’s also important to keep the boomer’s financial frame of reference from that time period in mind. He likely remembers the price paid for his first car, the rent on his first apartment, and the price of gas, a loaf of bread, a movie ticket, and a postage stamp. As boomers age, they are increasingly likely to recall these prices and compare what they are currently being asked to pay to the nostalgia price. Of course, nobody expects to pay the 1950 price for anything, but the quick lurch of the comparison can give somebody pause.

All this offers great opportunity to the adept marketer or sales professional to create emotional affinity, a deeper and more influential form of rapport.

4. I Don’t Get No Respect
This leading-edge boomer reference is the catch line of the late Rodney Dangerfield. No boomer likes disrespect. Most don’t make a scene over it; they just make a note of it and take their business elsewhere, while telling a dozen other people about being treated poorly.

Seemingly little things can be big irritants. A common customer complaint I hear when I quiz boomer consumers about disrespect is having a business’s phone answered, the person hastily saying, “I have to put you on hold,” and doing so. Over half say when it happens and they're calling to place a take-out order, they hang up and just cook something; over one-fourth say if calling a new service provider and it happens, they hang up and move on to the next Yellow Pages' ad.

There will be a price exacted for perceived disrespect: a warm prospect suddenly turned cold, a customer lost, negative word-of-mouth. If you are to succeed with boomer and senior clientele, you need to give a lot of thought to how you can show respect, and how you might err and show disrespect; to staffing with people trained and coached in this and, ideally, with affinity to the clients; and in policing the procedures you settle on. 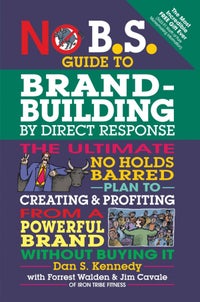 No B.S. Guide to Brand-Building by Direct Response

No B.S. Guide to Brand-Building by Direct Response 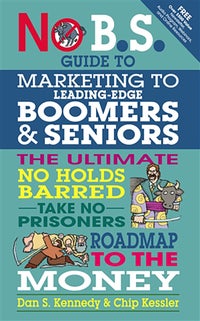 No B.S. Guide to Marketing to Leading-Edge Boomers and Seniors

No B.S. Guide to Marketing to Leading-Edge Boomers and Seniors