By Maria Muto-Porter May 17, 2013
Opinions expressed by Entrepreneur contributors are their own.

The girl's engineering game, which retails for $29.99 and involves helping Goldie build a belt that spins her dog Nacho around so he can more easily chase his tail, is barely a year old and kids are already clamoring for the toy. Pre-orders are double projections and there's about a four-month back-order for the company's first product, says Sterling, adding: Two product sequels are in development, as well. 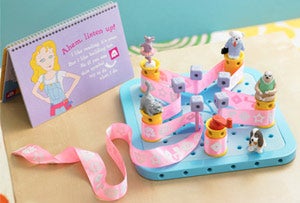 The game has obviously struck a chord with consumers. But Sterling hopes GoldieBlox will have an impact far beyond the toy chest. She wants to resolve the question of why there are so few women in engineering.

"Engineering is still a very male-dominated field and I spent years of my life kind of struggling with that," says Sterling, 30, who received her engineering stripes from Stanford University. If kids could start thinking about and demystifying engineering concepts earlier in life, they'd be more inclined to try their hand at the field down the road, she added.

While the jury is still out about whether Goldie's travails with Nacho will pay off in terms of more female engineers, one thing's for sure, Sterling is breaking down barriers -- in engineering and beyond. Here, we check in with the young trep about her adventures in Toyland and Silicon Valley, where her fledgling firm is based: 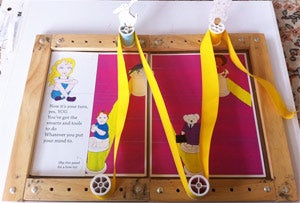 Q: Obviously, the media (ehem) is interested in your story. How did you land so much buzz?
A: I did six weeks' worth of prep prior to going live on Kickstarter with a PR strategy. I even hired someone who worked on PR full time. We got an exclusive with The Atlantic and TechCrunch launching the story on the day we went up.

Also I had more than 100 people -- friends and mentors and advisors -- who feel really involved with GoldieBlox. When we went live they literally spent hours sending long personal emails to everyone in their databases. That makes a much bigger difference than just posting a quick link or a tweet.

Finally, I invited Tim Schafer, the computer game designer, to do a cameo in my video with his daughter. He is sort of a Kickstarter celebrity himself. He did a Kickstarter six months before mine that raised more than $3 million. He has about 90,000 Kickstarter backers who he messaged on the day we went up.

Related: Young Women Entrepreneurs Speak Out About Starting Up Today

Q: What was the most surprising thing you've learned in business so far?
A: My biggest shock was that the toy industry is also an incredibly male-dominated field. That just didn't even cross my radar. I was expecting a lot of young and innovative people at the New York Toy fair last year, and what I found instead was a lot of older white men in suits.

Q: You put your entire life savings into the business. What other sources for funding did you find and what tools did you use to close the deal?
A: I raised a seed round before Kickstarter with friends, family and angel investors. I created a Pitch Deck -- just your standard 12-page intro, competition, an 18-month financial plan and projections.

But I think the most powerful tool that I used to raise money was a video of the user testing that I did with kids. On the business side, I did my homework. There was definitely a market opportunity, all of that was solid. But the video of the kids playing with it and learning and enjoying it was really what fueled it for most of the investors.

Q: What's your best advice for young treps?
A: Have true passion for the project that you're about to do. You need to be obsessed with it -- not just ‘oh this is kind of a good idea, I'll do this.' I think that entrepreneurs need to live and breathe it. There can't be any doubt in their minds that this is what they need to do. And then, get some sleep.