Marti Benedetti
August 30, 2013 5 min read
Opinions expressed by Entrepreneur contributors are their own.

Last July, Cleveland's Daniel Mazzeo decided he'd propose to his girlfriend. When he did, he called Jay Hobbs.

Hobbs isn't his best buddy or even a family member. He's the founder and chief executive officer of a marriage proposal planning business, Perfect Proposal that services northeast Ohio. Hobbs listened to Mazzeo's personal story, one that included meeting his girlfriend as a child at his uncle's Cleveland Indians suite. Hobbs planned "a layered experience" inspired by the story that started with a runner sprinkled with rose petals leading to a $3,000 suite at Cleveland's Progressive Field. Inside were balloons, peanuts and a giant bag of Cracker Jacks containing an Indian's jersey with her new last name. Later, friends and family arrived to help celebrate. The next day, the couple found themselves on the cover of the Cleveland Plain Dealer. And of course, she said "yes."

Hobbs, 31, says the idea for his business came to him in a detailed "HD, Imax, 3D" dream in the middle of the night while visiting his mother three years ago during the holidays. He wrote down the key points in a notebook and went back to sleep.

At the time, Hobbs, who has an MBA from Florida A&M University, was working as a commercial banker in Washington, D.C. He'd been an event planner in college and couldn't shake the dream. One month later, he had formulated his plan for Perfect Proposal.

As a financial expert, Hobbs, 31, was adept with business models, giving him a head start in planning his company. He talked extensively with people in the wedding industry, asking them what they charged and how they operated. He decided lower-cost Cleveland would be an ideal incubation market, especially given his strong business network in northeastern Ohio. In six months, and with $25,000 of his own money, he had Perfect Proposal up and running. Hobbs started with three hires, all experts in the wedding and event industry. He now has seven contractors, who do everything from taking calls to creating and setting up events with clients. 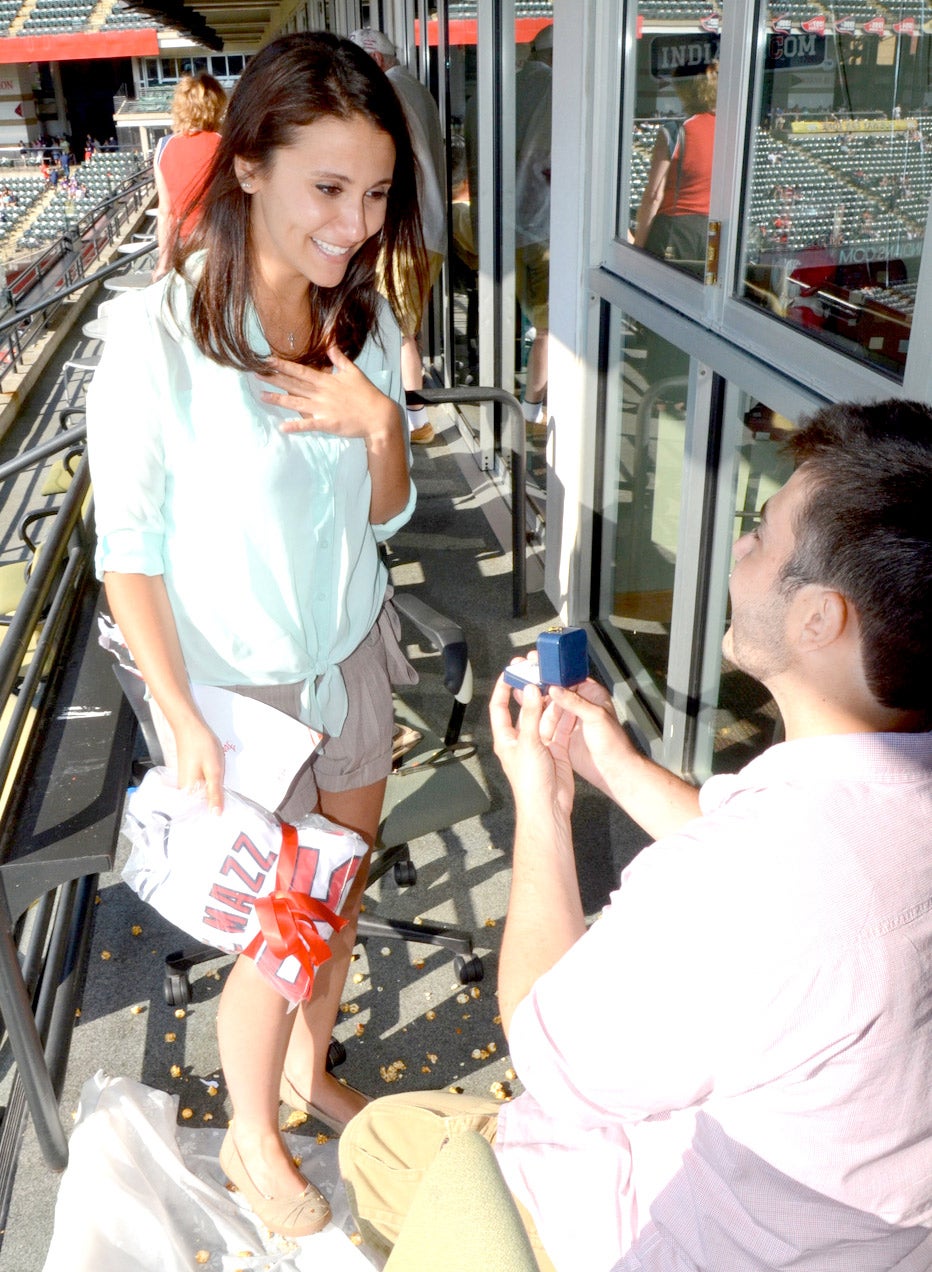 Perfect Proposal arranged a package deal with the Cleveland Indians that included an appearance with the team mascot and a congratulatory message on the scoreboard.
Image credit: Perfect Proposal

To get the word out to his main demographic – men who might not know his service exists -- the bulk of Hobb's initial outlay went toward marketing via social media sites such as Facebook, Twitter, Pinterest and Instagram, along with Google advertising. He still uses social media to market, but says most of his clients now come through referrals. The company arranges around 3 to 5 proposals every month and has coordinated 150 since launching in 2010.

"We market to people with disposable income, but no time," Hobbs says. That crowd includes corporate bankers, doctors, engineers and IT executives, many of whom are looking for an expert to create a moment that will come only once. He also targets busy graduate students at the six universities in the Cleveland area.

Hobbs says that social media and TV shows such as "The Bachelor" have placed an increased emphasis on how the question will be popped. Elaborate proposals are so intriguing, several production companies have contacted Hobbs about a reality show about the business, though Hobbs says he's made no decisions and no plans are yet in the works.

Wedding spending can be volatile and has faltered in the past decade, according to The Wedding Report Inc., a market research company. The cost of the average wedding dropped nearly 32 percent during the recession after reaching a high of $29,000 in 2007. Spending has grown since, but hasn't reached its earlier heights, remaining steady at approximately $26,000 for the past two years.

Despite the unpredictability, Hobbs is undeterred. As yet, no client has been turned down and the company boasts a 100 percent "yes" rate. Proposals can range from something simple, staged in a romantic restaurant for $149, to something more grandiose costing around $5,000 depending on the client's budget.

Hobbs estimates the cost for the Cleveland Indians extravaganza would have been $5,000 to $6,000, but as the stadium gifted the suite and others contributed money, cost to the client was only about $500, Hobbs says. He adds that his company also negotiates where it can to get better prices on behalf of its clients.

Other clients have asked for proposals under waterfalls and weekend get-a-ways. One client asked for a 50-person flash mob to erupt into a Justin Bieber song at an ice rink, where the soon-to-be betrothed skated with her girlfriends.

Hobbs says low overhead helped his company become profitable after the first year. Sales revenue was up 25 percent this year compared to the first quarter of 2012. He is projecting 50 percent growth in 2013. Hobbs plans to eventually expand into the Washington D.C. area. He says that from first-hand experience living and working there, the area has a younger, affluent population that would be a match for the service.

Social event planner Donna Brian, owner of Love in Bloom in Shreveport, La. and state coordinator for New Milford, Conn.-based Association of Bridal Consultants, says she sees this kind of business as up and coming, citing reality shows for driving demand for creative and over-the-top proposals. "These shows have done well for our industry across the board."

Meanwhile, Hobbs, who is not yet married, anticipates quite a splashy proposal for his girlfriend, but doesn't have it sorted out just yet. When the right time comes, he "plans to do it up," he adds.