What Twitter's New Scheduled Tweets Mean for Marketing Your Business

By Zach Bulygo October 25, 2013
This story originally appeared on KISSmetrics

Twitter has announced a new tool exclusively for Twitter Ads users – Scheduled Tweets. It lets the users create a tweet and then schedule a date and time for it to be sent out, up to a year in advance.

What does this new feature mean for marketers? How do they use Scheduled Tweets? How can they maximize its value? Is there anything they should be aware of? And what does this mean for similar services like Buffer?

I hope you’ll get the answers to all of these questions in this post. Let’s get into it.

How to Schedule Tweets

If you haven’t already signed up, go to ads.twitter.com to sign up for an advertiser account. Then, you can either select the blue “Compose Tweet” button or go to the new “Creatives” tab and select “Tweets”: 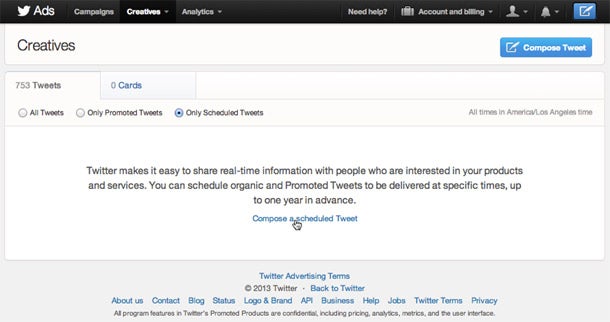 You’ll be presented with a box:

Select Scheduling and write your message, and then select a date and time: 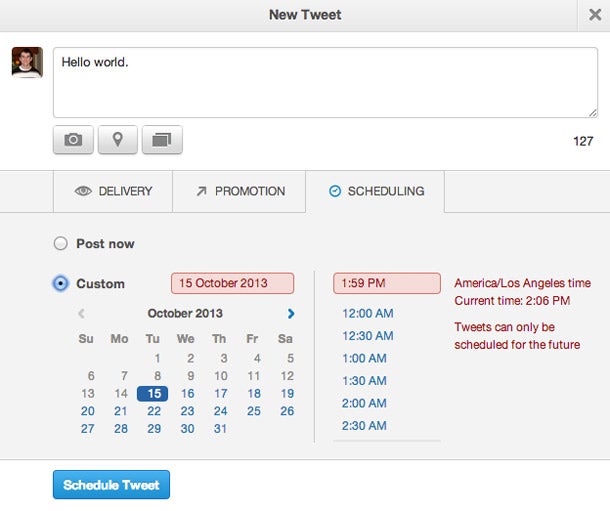 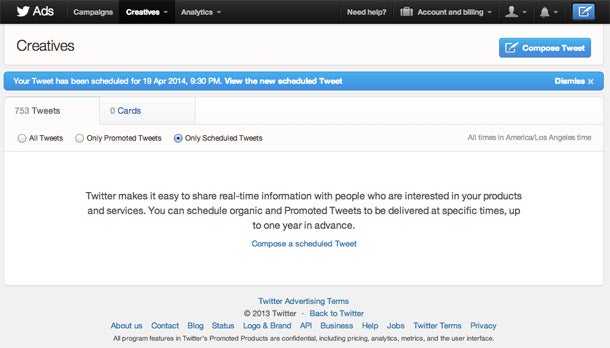 And you’ll see it in your “All Tweets” column: 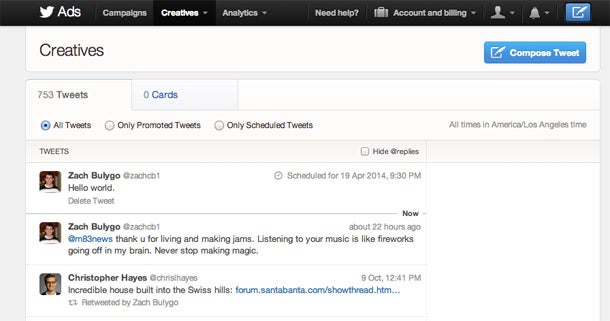 By selecting “Only Scheduled Tweets,” you’ll see that list: 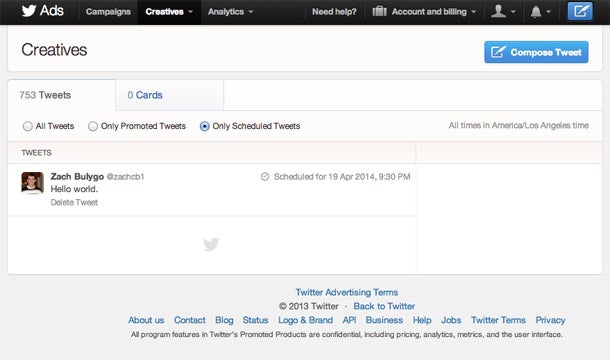 Now that you know how to use Scheduled Tweets, let’s get into what you can use it for.

4 Awesome Things You Can Do with Scheduled Tweets

1. Anticipation of a Timely Opportunity

Do you know that you will need to tweet something two months from now?

Would you like to craft your tweet right now and schedule it to be sent at a specific time?

With scheduled tweets, you can do just that. Write your tweet and have it sent at the optimal time. Let’s look at a few examples where you can do that. 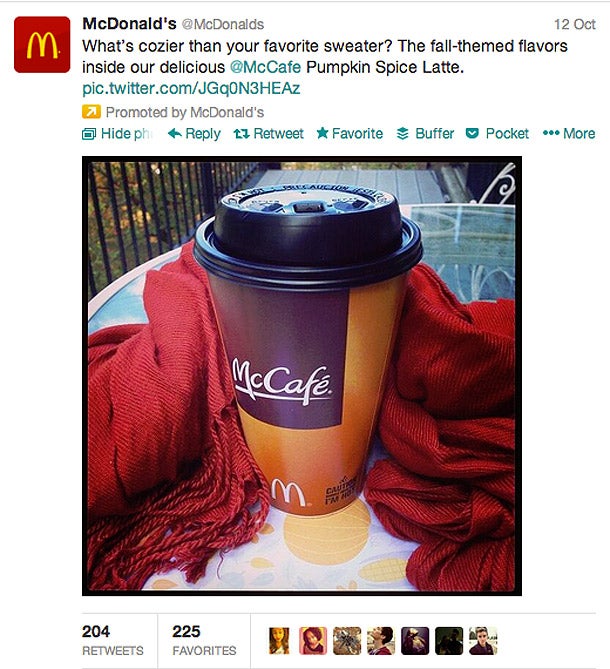 Do you have a sale coming up and know you’ll be too busy to hop on Twitter to tweet about it? Or worried that you’ll forget? In this case, it’s great to use Scheduled Tweets.

You probably already follow a few accounts that share links multiple times a day. These accounts share links to articles, blog posts, videos, and any other resources they think their followers would find valuable.

With Scheduled Tweets, you can add links to your account and schedule them to be sent at specific times every day. You also can throw in a “Promoted Tweet” once in a while.

Do you live in the United States but have a lot of followers in Beijing? Do you want to send out tweets mid-afternoon their time but don’t want to wake up in the middle of the night to do it?

With Scheduled Tweets, you can do that and not worry about having to wake up at 2:00 AM. Just write your tweet, set the time it will be sent (time-set is your local time), and sleep peacefully through the night.

If you’re curious about the optimal time to tweet, use Scheduled Tweets to help. Just spread your tweets across multiple times and view the effectiveness once they’re sent. If you see a particular time when a tweet got more traction, schedule tweets to be sent around that time.

Be sure to take a look at our Science of Social Timing Part 1: Social Networksinfographic for more on this topic.

A Word of Caution

After the Colorado shooting on July 20, the NRA sent out a tweet that morning, roughly nine hours after the tragedy. Filmmaker Michael Moore (a strong supporter of gun control) noticed:

As you can see, thousands retweeted Moore’s post, making the original unintended NRA tweet visible to thousands of people. The unfortunate part is that this was likely a scheduled tweet, one that the NRA didn’t think to delete.

Even if you’re not the NRA, it’s always a good idea to pause your scheduled tweets during a tragedy or big news event. A few others have learned the hard way that it’s not about them or their brand during tragedies. A simple message like this that notifies your followers will work well:

We're taking a moment of silence for the victims and families of today's tragic event. Our hearts go out to all who have been affected.

What This Means for Buffer

Many have been curious about what this means for a service like Buffer, which is similar to the Scheduled Tweets feature. I asked Leo Widrich, Co-Founder of the company, for his reaction. This is what he said:

“I’m very excited about Twitter building out a scheduling feature. I believe that confirms the need for people to post Tweets at the right time, which is something we’ve been trying to optimize for over the past few years with Buffer.

“As for Buffer specifically, I believe Twitter’s new scheduling has some very positive implications as it helps educate lots of new people who didn’t know beforehand that you can actually schedule Tweets.

“Since Twitter’s main focus isn’t just scheduling, I think that Buffer is a great extension to it as we offer a lot of features beyond just scheduling, such as other networks, like Facebook, Google+ and LinkedIn, social analytics, as well as timing optimizing and smarter scheduling options.”

It looks like Leo is taking the “rising tide raises all ships” outlook to the new feature release.

As always, I’d love to hear your ideas for how marketers can use Scheduled Tweets. If you’ll be using it, what will your primary purpose be? Let’s hear it in the comments!