The Brooklyn Navy Yard was built in 1801 and now, more than 200 years later, it’s having quite the renaissance.

As the once iconic hub for manufacturing gets a second wind, two unlikely entrepreneurs are overhauling one of the old warehouses that sits along New York City's East River. What they hope is that the resulting collaborative workspace, called New Lab, will become an axis for the Brooklyn Navy Yard to orbit around as it continues to develop, grow and attract entrepreneurship.

“We feel like we are building the town’s square for the Navy Yard,” says New Lab co-founder Scott Cohen, talking to Entrepreneur.com from the beta space one Thursday afternoon this past December. Cohen is one of the private investors in the New Lab facility. He has a varied artistic background and is in the final stages of producing a movie he shot in Antarctica.

The beta space for New Lab, which opened in February 2013, houses around 40 entrepreneurs, artists, and designers across 16 companies. The temporary workspace is one open room, save a conference room and small workshops closed off from the main space, and the startups are all on top of each other, with workspaces fit together like a jigsaw puzzle. That’s sort of the point though -- that proximity breeds collaboration.

Related: 3-D Printers Take a Step Toward the Mainstream

The first class of New Lab tenants includes a design company that makes implants for knee surgery, a company that makes geometrically engineered spoons to improve the feeding experience for babies, a boutique motorcycle entrepreneur who is working to transform an abandoned space in New York City into a public park, an engineering studio that makes interactive physical structures for music performance stages, a design institute making a watch out of cow cells that grow in a lab and a dozen or so other similarly innovative companies and designers.

The beta space for New Lab has large windows looking out over the East River. Sunsets over the Manhattan skyline are epic, but they are really just a bonus. The beta facility for New Lab is strategically positioned to overlook the construction site for the new, much larger space. Right now, the New Lab future space is just a skeleton of a steel beams. The old shipbuilding space has been stripped to its bare bones. But when completed, the space will be an 84,000-square-foot facility for entrepreneurs and innovators to brainstorm, collaborate and innovate. The building being renovated to house New Lab is one of a dozen buildings in the design or construction phase in the Navy Yard.

The flurry of activity has given a much-needed jolt to the Navy Yard, which has been in a slumber for decades. President John Adams authorized the creation of the Brooklyn Navy Yard, and four other shipyards throughout the young U.S., at the very end of his presidency. The shipyards employed as many as 70,000 people during World War 2 and were shuttered a couple of decades later by Secretary of Defense Robert McNamara. 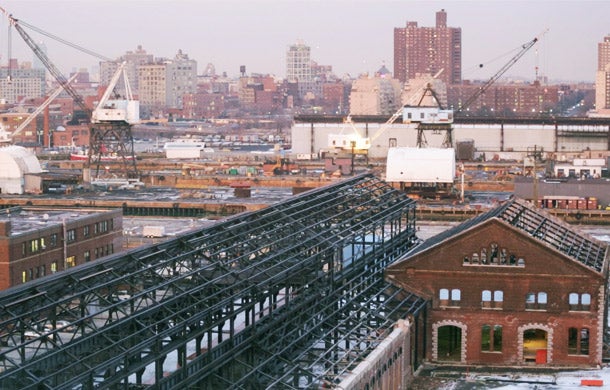 The view from the beta space of New Lab in the Brooklyn Navy Yard overlooking the construction site for the new facility.
Image credit: Kian, Entrepreneur.com

In the '70s, the Navy Yard reopened, but struggled. Two times, large maritime companies came in, brought jobs, and then closed down. In the 1980s, New York City Mayor Ed Koch tried again to revitalize the space with the Brooklyn Navy Yard Development Corporation. The Yard was broken down into smaller spaces and a more diverse group of tenants were brought in. By the late 1990s, 200 smaller and mid-sized businesses had moved in, bringing 3,000 jobs and lifting the occupancy rate to 98 percent. Growth continued and in the first decade of the new millennium, the Yard became home to 275 businesses with 6,000 employees.

Cohen’s business partner, David Belt, is a real estate developer, and the ghosts of the space’s past spoke to him. When Belt found the old warehouse spaces in the Brooklyn Navy Yard, he called up Cohen and said, “I need you to come look at this building because there is something about it.”

The two stood in the rundown, forgotten shipbuilding warehouse and tried to articulate to each other why the space resonated with them so much. “We stood inside the building and we just started talking about, ‘Wow, something amazing happened here. And something remarkable should happen here.’”

The New Lab facility is expected to officially launch in the fall of 2015. Cohen and Belt have received financial help from the city, state and federal government, along with a bevy of corporate sponsors, including design software maker Autodesk and 3D-printer makers EOS and Ultimaker.

Since the days when the Brooklyn Navy Yard was buzzing with tens of thousands of workers, manufacturing has followed inexpensive labor to countries like China, Bangladesh and India. The rebuilding of the Brooklyn Navy Yard does not mean that the migration of manufacturing overseas will reverse. Mass production of widgets and apparel is likely not coming back to the U.S. any time soon. 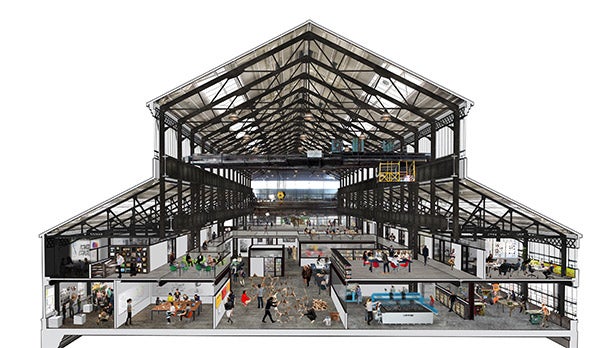 The design for the New Lab facility in the warehouse includes both private work stations and open space for collaboration.
Image credit: Macro Sea