By James Clear April 22, 2014
Opinions expressed by Entrepreneur contributors are their own.

In one of my very first articles, I discussed a concept called identity-based habits.

The basic idea is that the beliefs you have about yourself can drive your long-term behavior. Maybe you can trick yourself into going to the gym or eating healthy once or twice, but if you don’t shift your underlying identity, then it’s hard to stick with long-term changes. 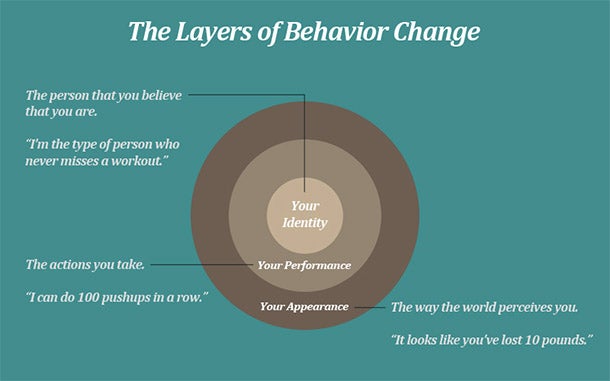 Most people start by focusing on performance and appearance-based goals like “I want to lose 20 pounds” or “I want to write a best-selling book.”

But these are surface level changes.

Related: How You Can Form Better Habits Faster

The root of behavior change and building better habits is your identity. Each action you perform is driven by the fundamental belief that it is possible. So if you change your identity (the type of person that you believe that you are), then it’s easier to change your actions.

This brings us to an interesting question. How do you build an identity that is in line with your goals? How can you actually change your beliefs and make it easier to stick with good habits for the long run?

How to Change Your Beliefs

The only way I know to shift the beliefs that you have about yourself and to build a stronger identity is to cast a vote for that identity with many, tiny actions.

Think of it this way…

Let’s say you want to become the type of person who never misses a workout. (If you believed that about yourself, how much easier would it be to get in shape?) Every time you choose to do a workout — even if it’s only five minutes — you’re casting a vote for this new identity in your mind. Every action is a vote for the type of person you want to become.

This is why I advocate starting with incredibly small actions (small votes still count!) and building consistency. Use the 2-Minute Rule to get started. Follow the Seinfeld Strategy to maintain consistency. Each actions becomes a small vote that tells your mind, “Hey, I believe this about myself.” And at some point, you actually will believe it.

Of course, it works the opposite way as well. Every time you choose to perform a bad habit, it’s a vote for that type of identity.

But here’s the interesting part…

As I mentioned in this article, research shows that making a mistake or missing a habit every now and then has no measurable impact on your long-term success. It doesn’t matter if you cast a few votes for a bad behavior or an unproductive habit. In any election, there are going to be votes for both sides.

Your goal isn’t to be perfect. Your goal is simply to win the majority of the time. And if you cast enough votes for the right identity, eventually the good behaviors will win out.

What Can We Learn From This?

Every time we participate in a ritual, we are expressing our beliefs, either verbally or more implicitly.
—Tony Schwartz

I find it useful to think about identity-based habits for a few reasons.

First, identity-based habits focus on you rather than your goals. It is surprisingly easy to achieve a goal and still not be happy with who you are as a person. Society pushes us to obsess over results: What are your goals? How busy are you? How successful have you become?

And while there is nothing wrong with achievement and improvement, it is also very easy to forget to ask yourself the more important questions: Who am I? What do I believe about myself? What do I want my identity to be?

Related: How Your Workplace Can Inspire Good Habits Among Employees

Identity-based habits are one way to match your values and beliefs with the outcomes that you want in your life. (My 2014 Integrity Report was another attempt.)

Second, the idea of “casting votes for your identity” reveals how your daily actions add up over the long-term. Your actions drive your beliefs and each action you take is a vote for the type of person that you believe that you are. What beliefs are you expressing through your actions?

Third, this framework helps to remove the “All or Nothing” philosophy that can so easily wreck our progress. For some reason, we often think that if we fail to follow our exact plan step-by-step, then we have totally blown it. The truth is that it doesn’t work that way at all. If you make a mistake, remember that it’s just one vote. Be aware of the votes you’re casting and try to win the majority. Every action is a vote for your identity.

I’ve said many times that I don’t have all the answers. As always, I’m just learning as I go. If you know of other ways to change your beliefs and build a new identity, feel free to share.

A version of this article first appeared on JamesClear.com. For useful ideas on improving your mental and physical performance, join his free weekly newsletter.