Under Armour Just Proved Human Decency Is the Best PR

Sometimes the best PR is just some good-old human decency.

Case in point: when 4-year-old Jasper Poole was tragically mauled by a dog last March, he just so happened to be wearing his favorite red Under Armour T-shirt. He called it his “superhero shirt.”

“Though he was dragged by his leg, his shirt showed no signs of damage,” wrote Jasper’s dad, Nigel, in a post on Imgur.

During their long nights at the hospital throughout the ordeal (he endured four hours of surgery and received over 300 stitches, but is expected to make a full recovery), an idea suddenly dawned on Jasper’s mom. “My wife contacted Under Armour and told them his story and how well the shirt held up.”

Related: Why Startups Should Still Care About Things That Don't Scale

They were stunned to receive a package on their doorstep later that week.

“Your mom emailed all of us here at Under Armour to let us know how brave you have been during your recovery,” wrote the company’s head of social media CSR, Amanda Ozarowski. “She mentioned that you are a big fan of super heroes and we just wanted you to know that you are our super hero!”

That’s not all. Ozarowski had also enclosed some serious swag: a veritable bounty of superhero-themed Under Armour T-Shirts, backpacks and shorts. See more pics below from Jasper’s dad of this heartening act of humanity that should also serve, for any brand, as a master class in customer service.

Related: What I Learned About PR From Working With Steve Jobs 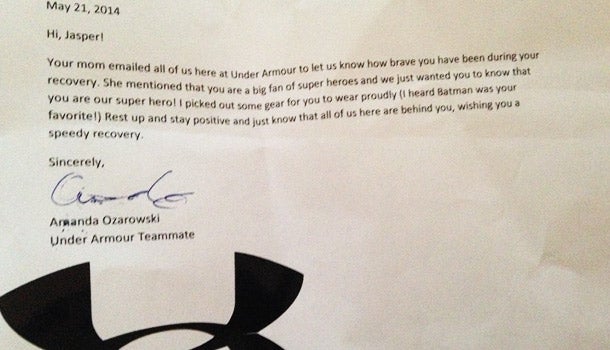 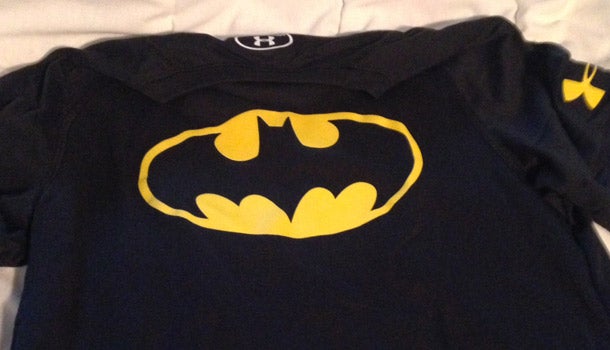 Smart Money Podcast: How Nerds Choose the Best, and Paying for College

5 Innovative Global Initiatives to Invest In