The intrepid path being forged by 13-year-old Isabella Rose Taylor begs a fundamental question for any young entrepreneur wondering when to start up: “Why wait?”

Setting out at a young age has catapulted Taylor, a clothing designer who hails from Austin, Texas, to unthinkable heights, she says. As the youngest designer to be carried by Nordstrom -- her fall 2014 juniors collection is now available in 10 stores and online -- Taylor ticked another item off of her bucket list yesterday when she showed her Spring 2015 collection at New York Fashion Week.

“From a young age, my parents always encouraged me to follow my dreams,” says Taylor, whose slight stature belies a preternatural poise. “They told me I didn’t have to wait until I was older to be my own boss and do what I love.”

Taylor’s artistic roots trace back to the ripe age of 8, she says, when she began incorporating “mixed media” into her finger-painting. She then attended a summer sewing camp and fell in love with the mechanics behind clothing construction. Fashioning items for friends and family in her spare time -- piloted by her parents’ support -- slowly evolved into a full-on business.

Social media provided a wider jolt of recognition. Taylor’s Facebook page, which now counts more than 166,000 ‘likes’ -- in addition to the novelty of her age -- garnered the attention of local news outlets and eventually major national programs including the Today show.

“Social media is such an easy thing to do now,” she says, “and having a presence is so important.” Taylor is also active on Instagram, Pinterest and Twitter. And yesterday, in a strategic move, she launched her very own YouTube channel under the auspices of leading multi-channel network (MCN) StyleHaul.

Having struggled to find clothes that spoke to her sensibilities as a tween, Taylor says she sought to fill a void with her designs, melding “a grungy street vibe with hippie elements and quirky details.” Pieces shown at Fashion Week included oversized tees, a cropped halter with an embroidered storm cloud and an array of babydoll dresses. Prices generally range from $28 for knit shorties to $89 for a cardigan. 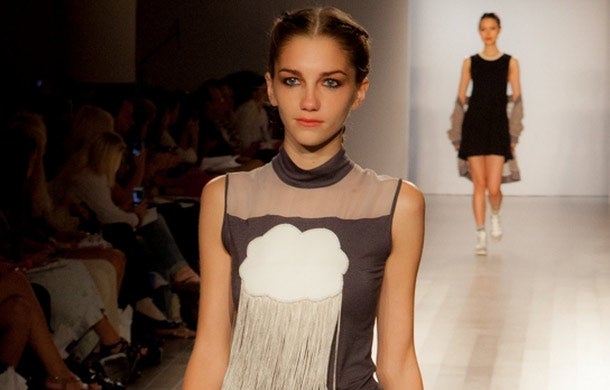 But beyond clothes, Taylor ultimately envisions a global brand that incorporates accessories like shoes, handbags and jewelry. And she’s inching closer to that goal by raising her first-ever funding round, which initially took shape at an annual conference held by the Dell Women’s Entrepreneurs Network (DWEN), explains the computing giant’s executive director of global communications, JJ Davis. (The clothing line’s initial investments came care of Taylor’s parents.)

After being invited to speak at Dell’s annual gathering of 800 leading female entrepreneurs last year in Austin for the purposes of discussing business tech and beyond, Taylor caught the eye of member Lauren Flanagan, who is the managing director of an early-stage angel fund called Belle Capital.

After Taylor spoke about seeking various financing prospects and inviting business advice from more seasoned entrepreneurs, Flanagan committed to an investment from Belle Capital, says Davis, and then used the DWEN hashtag on Twitter to put the call out to other potential investors. Now, a seed round is close to being finalized.

While Dell itself has not invested in Taylor’s company, it has provided technology to aid Taylor in her design work, and has also sponsored her New York runway debut.

But just how does Taylor flourish in this predominately adult world? For one, as a Mensa member and college sophomore, she’s not your average teen. Her artwork is represented by Dallas gallerist Kristy Stubbs. Unlike her colleagues at work and school, however, most of Taylor’s friends are her own age.

And the way she sees it, hers is a generation that is increasingly looking to channel its gifts into business opportunities earlier and earlier. “I think everyone these days that’s my age is just super insanely busy,” she says. “I’m not the only one.”

Related: Young Millionaires: How These Entrepreneurs Under 30 Are Changing the World