The Billionaires Who Gained and Lost the Most Money in 2014

2014 was a rough year to be a Russian oil tycoon, but a pretty awesome year to be leading a Chinese ecommerce platform.

Jack Ma saw his net worth increase by $18.5 billion in 2014 as the company he founded, Chinese ecommerce giant Alibaba, became the biggest IPO in U.S. history . Meanwhile, Leonid Mikhelson, a Russian energy tycoon, saw more than a third of his wealth evaporate this year at the hand of plummeting global energy prices, a tumbling rubel and geopolitical tensions. That’s according to a ranking compiled and released by Wealth-X, a Singapore-based firm that compiles research on the ultra-wealthy.

Related: Entrepreneurship Is a High-Stakes Game. Know Your Odds Going In. (Infographic)

Have a look at the ranking of the top five winners and losers below. All numbers are in billions of U.S. dollars. 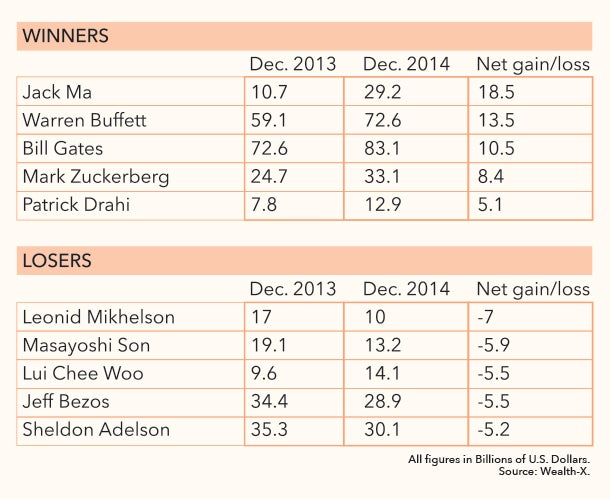 Legendary investor Warren Buffett and head of Berkshire Hathaway, had an impressive year as well. His net worth rose by more than $13 billion as his company’s stock climbed almost 27 percent from December of last year. As of midday on Dec. 17, Berkshire Hathaway was hovering near $222,000 a share.

Microsoft co-founder Bill Gates, the richest man alive, and Facebook founder Mark Zuckerberg also had good years. Patrick Drahi, the French founder of a telecom multinational that went public in January in Amsterdam, rounded out the list of the top five biggest gainers.

Related: Uber Raises $1.2 Billion in New Funding Based on a $40 Billion Valuation

But 2014 wasn’t great for everyone. Masayoshi Son, the Japanese businessman at the helm of telecommunications company SoftBank and the chairman of Sprint, lost almost $6 billion. Son, an early investor in Alibaba, made a lot of money when Ma took the company public, but he also lost a lot of money when merger talks between Sprint and T-Mobile fell apart. As of midday on Dec. 17, Sprint was trading at $3.92 a share, down almost 60 percent from a year ago.

Amazon founder Jeff Bezos also lost $5.5 billion in 2014. His company’s stock has fallen almost 25 percent over the last year, trading near $298 as of midday on Dec. 17. Amazon is a juggernaut, turning revenues of more than $90 billion, but Bezos has historically run his company on paper-thin margins with no profits. Instead, Amazon is constantly re-investing and experimenting. Recently, Amazon’s attempt to enter the smartphone market was a pretty epic flop. In a recent interview, Bezos said losing money is the cost of doing business.

Related: Method to Their Madness: The Oddball Habits of 7 Business Masterminds (Infographic)

“I’ve made billions of dollars of failures at Amazon.com. Literally billions of dollars of failures. You might remember Pets.com or Kosmo.com. It was like getting a root canal with no anesthesia. None of those things are fun. But they also don’t matter,” he said. “What really matters is, companies that don’t continue to experiment, companies that don’t embrace failure, they eventually get in a desperate position where the only thing they can do is a Hail Mary bet at the very end of their corporate existence.”

Finally, it was a rough year on the gambling floor. Lui Chee Woo, the Hong Kong billionaire who made his fortune in casinos, had a brutal 2014, shedding $5.5 billion. And the last loser, if you will, was Sheldon Adelson, the chairman and chief executive officer of the Las Vegas Sands Corporation, who shaved $5.2 billion of his wealth in 2014. Adelson, who is a major contributor to the Republican political party, is still worth north of $30 billion even after his recent losses.

Related: Who's the Richest Person in Your State? Chances Are, It's an Entrepreneur.