Dumyé Is A Means To An End

By Pamella de Leon March 18, 2015
Opinions expressed by Entrepreneur contributors are their own.
You're reading Entrepreneur Middle East, an international franchise of Entrepreneur Media.

“I believe through design, we have the power to shape our world for the better.” That was Dumyé founder Sahar Wahbeh’s pitch at the Gulf finals of The Venture, a global competition seeking the most promising social entrepreneurs around the world for a chance to win a share of a US $1 million fund. It’s a compassionate statement, and after beating out numerous applications, rising along with the top five finalists, what made Dumyé stand out in the sea of social ventures? To begin with, the inspiration for the startup is one of the most heartwarming aspects of Dumyé: her daughter. After searching for a doll to give as a gift to her daughter, Wahbeh, disappointed by the ones she found in the market, decided to create her own.  This wasn’t enough for Wahbeh to “shift careers” though, until she realized that this could be her way to not only share her life values with her daughter, but also “actually live it.”

Wahbeh wanted her daughter to respect the environment, so the dolls are “made with a mixture of organic, sustainable and mostly natural materials,” says Wahbeh. “I need her to have compassion [for others], which is why we commission an NGO [called Pardada Pardadi Educational Society founded by Virender Singh] in one of the poorest states of India to handle elements of our production.” This approach empowers women in their community to be self-sufficient, and the NGO uses their proceeds to educate the next generation of girls. Wahbeh also wanted to inspire generosity in her daughter, and so, every doll that Dumyé sells results in another doll gifted to an orphan through an art workshop, allowing the children to create a meaningful doll of their own. 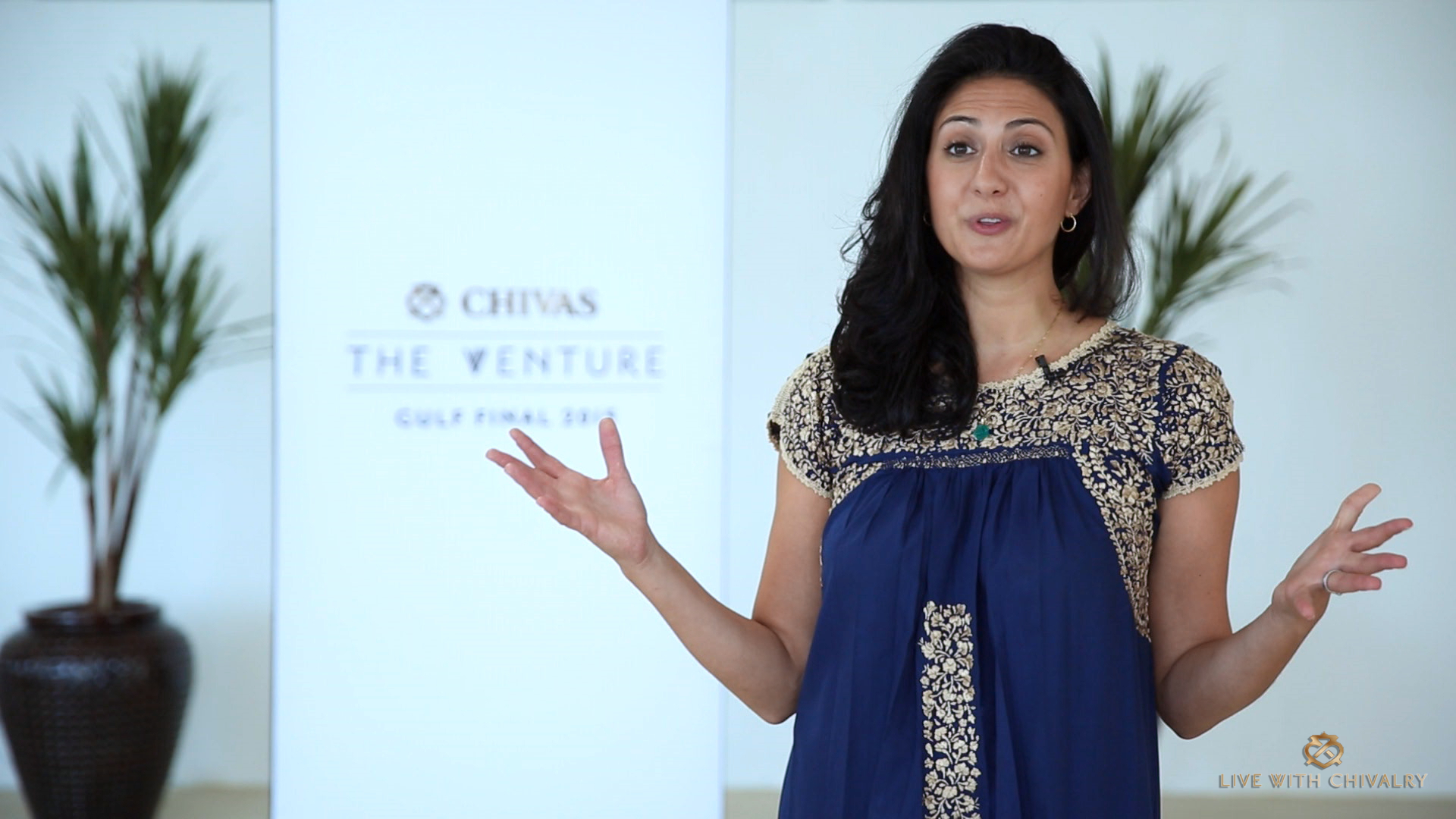 Now, while it may have started out as a lesson for her daughter, Dumyé is now an enterprise that has a presence in more than 15 countries, worked with hundreds of orphans in the Middle East and is now looking to expand its ‘giving program’ into Africa and India. Wahbeh, who comes from a branding consultancy background, finds her past experience “indispensible,” explaining how “Dumyé began as a brand that is growing into a business.” She admits this approach is unorthodox but believes it has been a valuable asset because ‘from day one, Dumyé knew exactly what its purpose was, and everything we have done since has been to both communicate and actualize just that.”

After launching their online boutique in June 2013, along with pop-up shops in Middle East and through select retailers around the world, Dumyé is now designing its fourth collection, with each doll inspired by “ideals, fashion and things our customers continually ask for.” They’ve come a long way from their first collection that had a quickly sold out doll named She-roe: “I think she captured people’s hearts because she was both feminine and powerful. This is the kind of role model our girls need, which is why we’re re-launching her in a new edition.” In terms of progress, Dumyé had also been asked about dolls geared towards boys and Wahbeh happily states that the new collection includes two male dolls.

For their marketing strategy, word of mouth, social media and pop-up stores has been their go-to methods of choice. Wahbeh notes how social media has been one of their best tools to engage with customers and receive feedback, adding that Instagram and Facebook are their most powerful channels among their social media accounts, and they encourage customers to share their dolls with the #MyDumye hashtag. 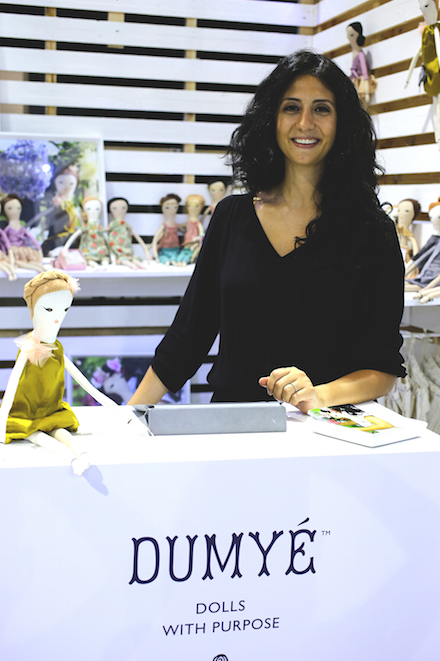 In a research by Endeavor Insight studying 20 social entrepreneurs (Harvard Business Review), they found that those who prioritized financial growth above social goals were “more likely” to grow their social business and have greater impact. What differentiates social ventures from social causes and non-profit organizations is their ability to have sustainable working business models and maintain self-sufficiency- a trait that the judges were looking for among the finalists. With Dumyé’s strong value for social impact, when asked about their business model, Wahbeh says, “In a nutshell, we sell eco-friendly cloth dolls and for each one purchased, we gift a doll to an orphan, allowing them to make it their own through an art workshop.” Wahbeh explains how Dumyé sells dolls in two sizes: a full-size limited edition personalized doll and a smaller Petite Dumyé. Regarding their model for return on investment, Wahbeh admits that they’re a startup that’s not in the profit generation stage– yet. Dumyé is currently in the process of “exploring various avenues for funding.”

With an “overwhelmingly positive” experience from The Venture, after hearing the judges critiques, Wahbeh feels “excited and humbled [with] the opportunity” and confident during the pitch, but thinks she could have “further highlighted the economic empowerment aspect of Dumyé.” But it’s only just the beginning: joining 16 other social enterprises from different parts of the world, Dumyé will be in a week-long training at Silicon Valley and later pitch to a panel in San Francisco for a chance at winning a portion of the US $1 million funding. “The judges have kindly offered to mentor me between now and then,” says Wahbeh. “We’re working together to strengthen Dumyé’s pitch so that when I hit the stage in San Francisco, I represent the region with an oomph.” Wahbeh is dedicating 2015 to expansion- with their production capabilities, product line and market penetration in the U.S., and the Middle East specifically, as well as the core Dumyé team. 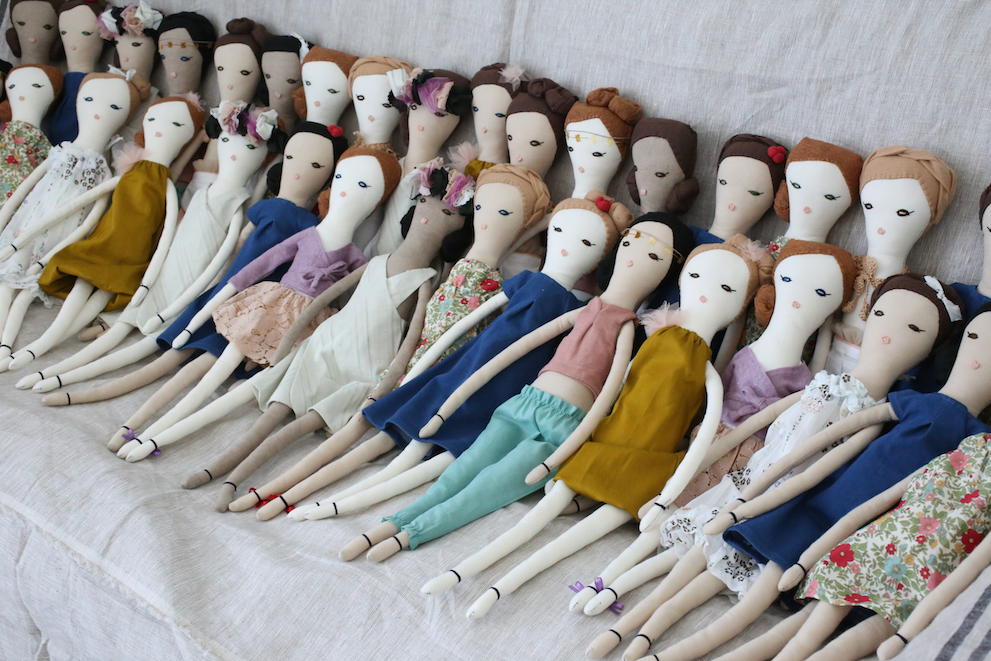 STARTING CAPITAL US $8000 from a small design project.

MARKET PENETRATION Dumyé dolls have sold in more than 15 countries, with the most concentrated customers in the Middle East, U.S., U.K. and Australia. Customers are social and environment-conscious women, ranging from CEOs to fashion editors to stay-at-home moms.

PROCESS “The first thing up was designing a doll with features that would become signature of a Dumyé doll, such as the embroidered rose bud mouth and almond shaped eyes.” The next step was creating concepts for each doll. “Once the designs for a collection have been sketched with paper and pencil, we begin shopping textiles, cutting patterns and creating samples that can be handed over to local craftswomen to recreate in numbers." 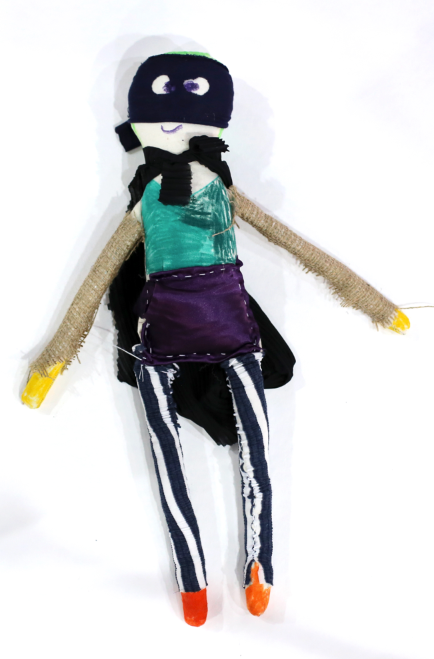 Dumyé doll designed by a child during a giving program

DUMYÉ AT THE VENTURE
PREPARATION “Much of my time was spent in developing the presentation itself. It was a great exercise in organizing everything that Dumyé stands for and has achieved from its inception.”

PITCHING “Everyone here is looking at your business through their lens of expertise. What I really appreciate is not only [am I] benefitting from their knowledge, but receiving their visceral reaction to my business, I found that incredibly valuable. 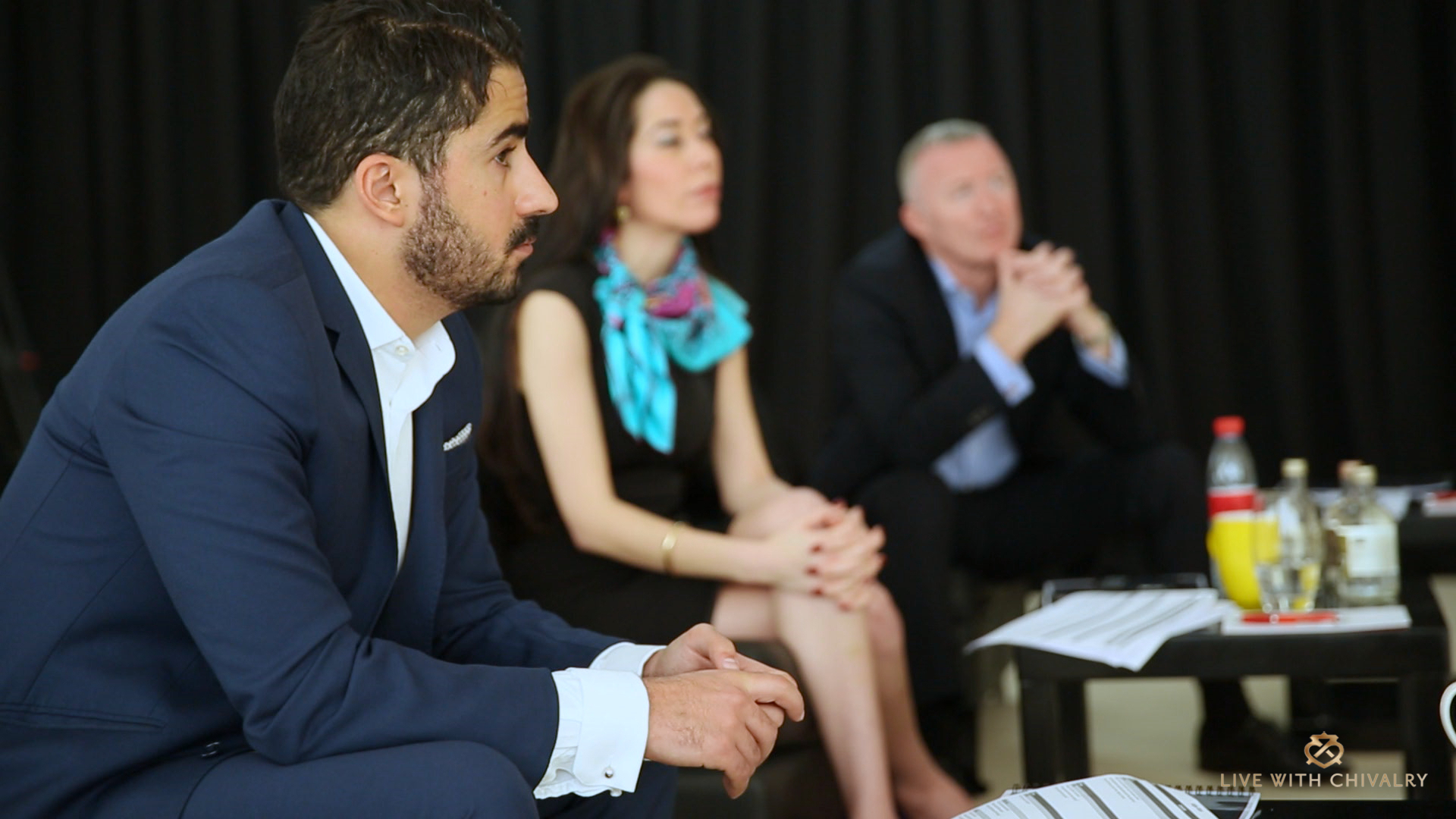 THE VERDICT: WHY DID THE VENTURE JUDGES CHOOSE DUMYÉ?
SOUSHIANT ZANGANEHPOUR
Consultant, Skoll Centre for Social Entrepreneurship
“The candidates in the Gulf finals were all quite strong in their own right, but what made Dumyé stand out was its growth trajectory and potential social impact, and the opportunity for The Venture to really add value to accelerate its journey, relative to the other candidates. In Dumyé, we saw the prospects of both a strong commercially successful and scalable business, alongside a sustainable engine for ensuring upward mobility for disadvantaged orphans globally. Not only does the business ethos and narrative strongly reflect the values of Sahar, we felt she was sufficiently open to adjusting her assumptions and changing aspects of her model to further optimize and strengthen the potential social impact of the business. This was critical because the structure of support surrounding The Venture are meant to do just this and intervene to add value, to hopefully accelerate Dumye’s chances of going from a budding small business into a regional or global champion for ‘Winning the right Way.’ The future looks bright for her.”

YOGESH MEHTA
Managing Director, Petrochem Middle East
"To me, Sahar’s project Dumyé met all the criteria for a business and an innovative idea that has a social enterprise fabric. She did a great presentation and also was honest to accept that she needed a strong finance person in her team to make her case more robust for the finals in San Francisco. She is a winner in all respects!

DAVID FREEBORN
Managing Director, Pernrod Ricard Gulf
"Dumyé stood out as a strong, robust business enterprise with a social purpose at its core which therefore recorded high scores across all the judging criteria. However, the additional attraction was sahar’s enthusiasm, commitment, honesty and energy that shone through during her pitch. Whilst there is work to be done on the package, Sahar will be a great representative from the Gulf for The Venture in San Francisco this summer.” 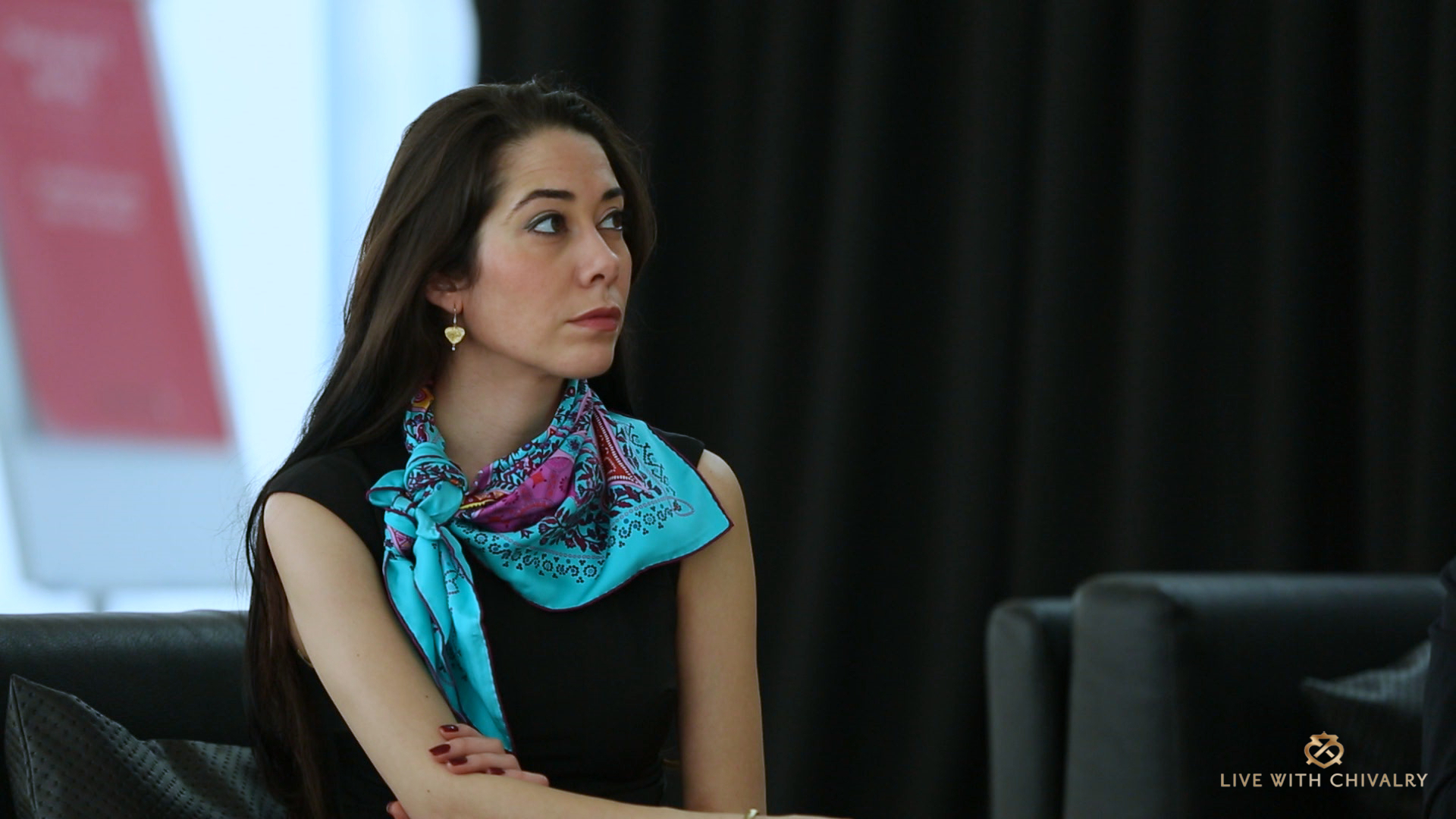 FIDA CHAABAN
Editor in Chief, Entrepreneur Middle East
"I felt that Sahar was the best-positioned GCC candidate for The Venture global finals because she really knows how to package her message, and her business model is an easily understood social enterprise with a lot of marketing potential. Marketing potential translates into widespread press coverage, and that means easy onboarding of new clients and tons of business development opportunities which can lead to bigger and better things for Dumyé.”

"We Got Acquired!" Cartlow Buys Out Fellow UAE-Born Startup, Melltoo