How Startups and Style Icons Aim to Spark a 'Fashion Revolution'

One year ago today, fashion designers Carry Somers and Orsola de Castro asked their style- and eco-conscious followers to wear their clothes inside out, snap a picture of themselves and then post it to social media with the question: Who made my clothes?

The #FashRev campaign spread to over 60 countries, with tens of thousands of people participating in the very first Fashion Revolution Day. It wanted consumers to ask the brands they sport whether they source, sew, dye and ship their products under eco-friendly and humane conditions.

“It’s re-educating our generation because we grew up with fast fashion and we’re all exhausted by it,” says Maxine Bédat, co-founder of New York City-based ethical ecommerce brand Zady. Fast fashion is the bread and butter of stores such as Zara and Forever 21, which rely on cheap, quick manufacturing to bring current runway trends to the masses.

But a catchy hashtag isn’t the cornerstone of Fashion Revolution. The movement was launched to honor the one-year anniversary of the Rana Plaza factory collapse in Bangladesh, which left 1,133 people dead and more than 2,500 injured. The April 2013 incident was the worst manufacturing catastrophe in history. Brands were also impacted, as retailers such as Inditex (parent company of Zara), Mango, JC Penney and Children’s Place used fabrics from the facility.

“Many of the western brands found in the rubble had no idea their fabrics were sourced there as a result of their extended supply chains,” said Bédat at a Fashion Revolution panel earlier this week at the Fashion Institute of Technology. She and Soraya Darabi launched Zady in 2013 and has since gained about $1.4 million in venture funding from firms like New Enterprise Associates and BoxGroup, according to Crunchbase. This year, their company was asked to serve as U.S. chair for the Fashion Revolution movement.

In the days ramping up to Fashion Revolution, Zady hosted panels, film screenings and public information events to raise awareness about shopping decisions and supply-chain management. While New York City was the flagship center of Fashion Revolution Day in the U.S., hundreds of events across the country are commemorating the Rana tragedy today, including an artisan pop up shop in Oakland, Calif., a sustainable design workshop at Buffalo State University in upstate New York, and a documentary screening at a textile factory in Minneapolis, Minn. Globally, 71 countries have signed up to host ground events.

But Bédat says the principles of Fashion Revolution are ingrained into Zady’s year-round business model. “We partner with each phase of the supply chain and do the heavy-lifting to ensure all resources were made under environmental and humane conditions.”

Related: 3 Stylish Startups That Want You to Ditch 'Fast Fashion'

Another way the founders of Zady are highlighting Fashion Revolution is through an infographic about the environmental and human costs associated with manufacturing. According to the infographic, the apparel sector is the second most polluting industry in the world and cotton production involves more child and forced labor than any other manufactured product.

“To spread facts and information, we’re using the art of storytelling because this resonates with millennials,” says Bédat. “It’s our job to present that information beautifully and create products that people can wear for many seasons.” She explains that paying the premium for better quality and timeless style will ultimately cut demand for fast-fashion production and reduce garment wastes in landfills. 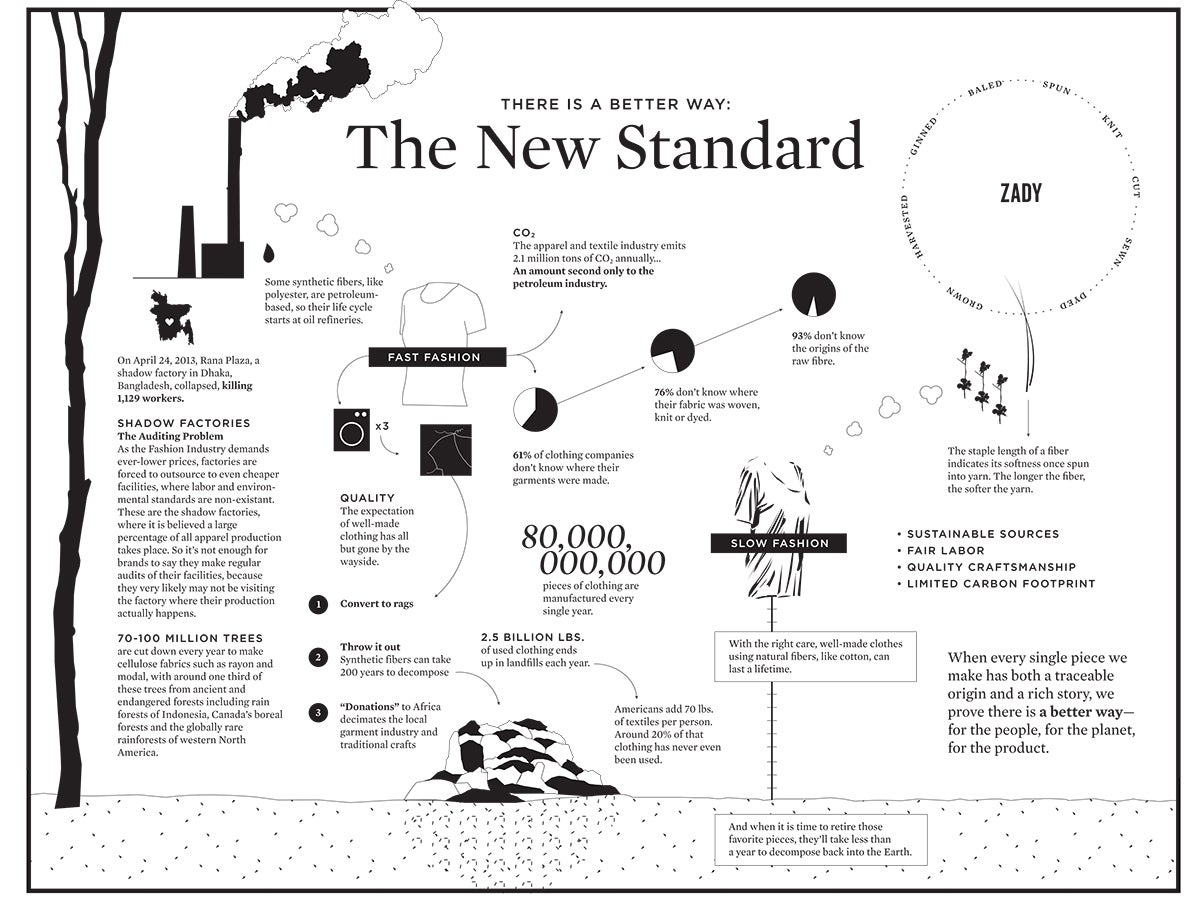 While the co-founders of Zady and Paul van Zyl of luxury brand Maiyet discussed at the panel how their brands were built on sustainability principles, Eileen Fisher said longstanding fashion houses have a duty to innovate their business practices, too. “Sure, 80 percent of my fabrics meet sustainability standards, but what about the other 20 percent? I could speak out and can proactively commit to sustainability.”

Just last month Fisher announced Vision 2020, a roadmap to ensure her namesake brand founded in 1984 reaches 100 percent sustainability within the next five years.

“Many believe fast-fashion is an inevitable way of life,” Bédat says. “But many once said the same thing about McDonald’s and smoking, both of which are on their way out.”

Related: The War on Clutter: 8 Ways to Edit Your Workspace and Life
More from Entrepreneur

How a Smart Manicure Device Became a $1.3 Million Crowdfunding Idea

Clara Louise, a Former Cleaning Worker, Is Now a Model Who Just Landed a Contract With Gucci