By Kareem Chehayeb July 9, 2015
Opinions expressed by Entrepreneur contributors are their own.
You're reading Entrepreneur Middle East, an international franchise of Entrepreneur Media.

If a market or industry has room for improvement, and nobody seems to take notice, then sometimes it’s best for an entrepreneur to rise to the occasion and initiate change in that sector. That seems to have been the case behind the UAE-based Adham Saleh’s launch of his online classifieds platform, EZHeights. Born and raised in the UAE, Saleh holds two Masters degrees from the University of Manchester in business and pharmaceutical studies. While he did have a brief foray into corporate life as a marketing manager for GlaxoSmithKline, Saleh claims he always had a passion for entrepreneurship, especially e-commerce. Having already experienced starting up an enterprise during his university years, an “events management and promotions company” that he later sold, he thought it was time to take on a new endeavor once again after he’d identified what he considered a gap in the market.

This is where EZHeights comes in, a classifieds website that, according to Saleh, focuses on “quality over quantity.” Stressing on its user-friendly interface, EZHeights’ Managing Director “wanted to create a high quality, one stop shop for consumers residing in the UAE and consumers moving to the UAE, to help them find and sell their products quickly and efficiently.” Developing EZHeights was rather capital- intensive, according to Saleh, who said that it is a “big website” and therefore “required a lot of time to develop.” while Saleh said that there were many different costs that added up, he specifically noted that much of the costs come from maintaining and improving EZHeights’ servers, in addition to staff costs. Despite being relatively new, EZHeights has a staff of 60 people. “we currently have a team 40 IT people, in addition to 20 more staff in various areas such as sales, marketing, legal, accountancy, HR and PR.” 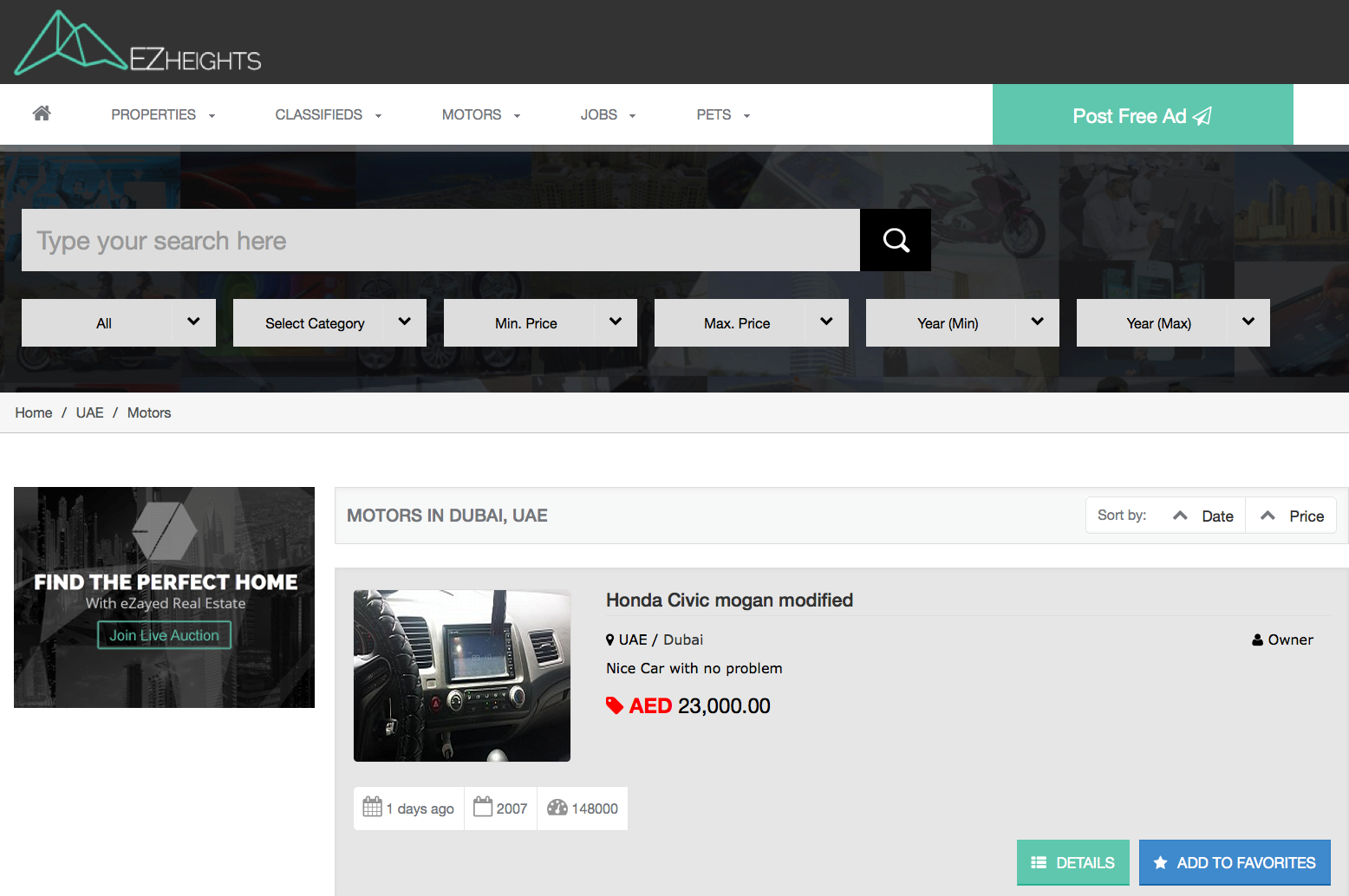 Despite all these costs, Saleh was precise and patient while developing EZHeights, focusing heavily on research and analysis on the website’s target audience in the UAE. The team specifically looked into the most popular topic searches in the country to arrange the platform’s categories, and also looked into consumer tastes and preferences to make sure EZHeights will be a platform that can almost guarantee an optimal user experience in the uae. now it’s just a matter of bringing users on board. The EZHeights marketing strategy is “mainly focusing on below the line marketing strategies complemented by a strong digital and social media plan,” adding that the only above the line effort being made is through radio advertising. what about social media? “not having a social media plan is like going into battle without a helmet,” says Saleh, stressing on the importance of businesses today, especially ones “driven by the internet,” to make the most out of social media.

With all that said, things get interesting once we identify the hefty competition in the UAE’s classifieds market. After asking about how EZHeights will stand out from the crowd, Saleh mentioned two factors. He first reiterated the gap that he discovered in the market for what he describes as “a premium classifieds website that provides high quality and reliable ads to consumers.” He then reveals what he considers to be EZHeights’ three standout features, in addition to two new ones that will be available soon. The first feature is the website’s manual approval process, which Saleh says will help them “control the quality of ads posted” by making sure that the ad includes a thorough description, a high-resolution picture, among other things. EZHeights’ second standout feature, according to Saleh, is its “emphasis directly on the owner,” which is especially useful in the properties and motors sections. He claims that owners can sell from these categories “properties directly if they are not interested in working with a third party.” Finally, real estate agents will definitely enjoy HZHeights’ “schedule a viewing” feature. Saleh says that “buyers can fill in a quick form adding the day and time they want to view the property,” thereby saving time for both the potential buyer and the agent.

And the portal’s two upcoming features? Job listings and auctions. Saleh says that EZHeights’ job listing section will have a simple but thorough filtering system to help employers find candidates “using a virtual CV to help with the filtering process.” he didn’t say much about the latter, but a local eBay-like auctioning platform could be a big hit in the UAE.