By Kareem Chehayeb October 4, 2015
Opinions expressed by Entrepreneur contributors are their own.
You're reading Entrepreneur Middle East, an international franchise of Entrepreneur Media.

Lebanon is a country that faces a plethora of problems, from the lack of 24-hour electricity and decent infrastructure, to the ongoing refugee crisis to a parliament that’s extended its term twice and no president in office. One would think that an uprising to sort out the country’s many social, political, and economic problems has been overdue for years. That said, a problem that impacted the vast majority of Lebanese, irrespective of their sect, political ideology, or socioeconomic class sparked the “You Stink” protests: garbage. Beirut’s waste management has been handled by Sukleen, a private corporation, for almost two decades. The way they landed that huge responsibility was iffy to say the least. Waste management is a municipal responsibility; however, that portion of funds was taken and given to Sukleen. What was a bottom-up decision became top-down. Moreover, Sukleen’s plan is relatively financially inefficient. The amount of money it requires to treat a ton of solid waste (per ton) is higher than that of many other countries. Politicians from across the political spectrum have also accused of it being corrupt, some even referring to it as “mafia-like.” One of the accusations? That Sukleen sells recyclables for extra revenue.

The final straw proved to be the Naameh landfill; it was reaching capacity limits, and was first closed for a short period in late January. Garbage piled up on the streets of Beirut. Despite pressure from the residents of Naameh, it was eventually reopened, with the government promising to work on an alternative. None of that happened. The landfill was closed again a few months ago in July, and Naameh’s residents are more adamant than ever to keep it closed permanently, with many complaining about the health issues it has caused over the years. As the garbage piled up on Beirut’s streets, makeshift solutions were implemented- some narrow streets were completely blocked by the garbage piles, and people could been seen wearing masks due to the public health concerns. To make matters worse, many people started burning garbage. And that’s how a few Lebanese activists and concerned citizens got together and started the movement dubbed “You Stink”. After a few small protests in late July, tens of thousands began joining them, hitting an all high of 250,000 on August 29. The protesters demanded a legal, economically efficient solution to the garbage crisis that is environmentally friendly and safe for all Lebanese citizens. 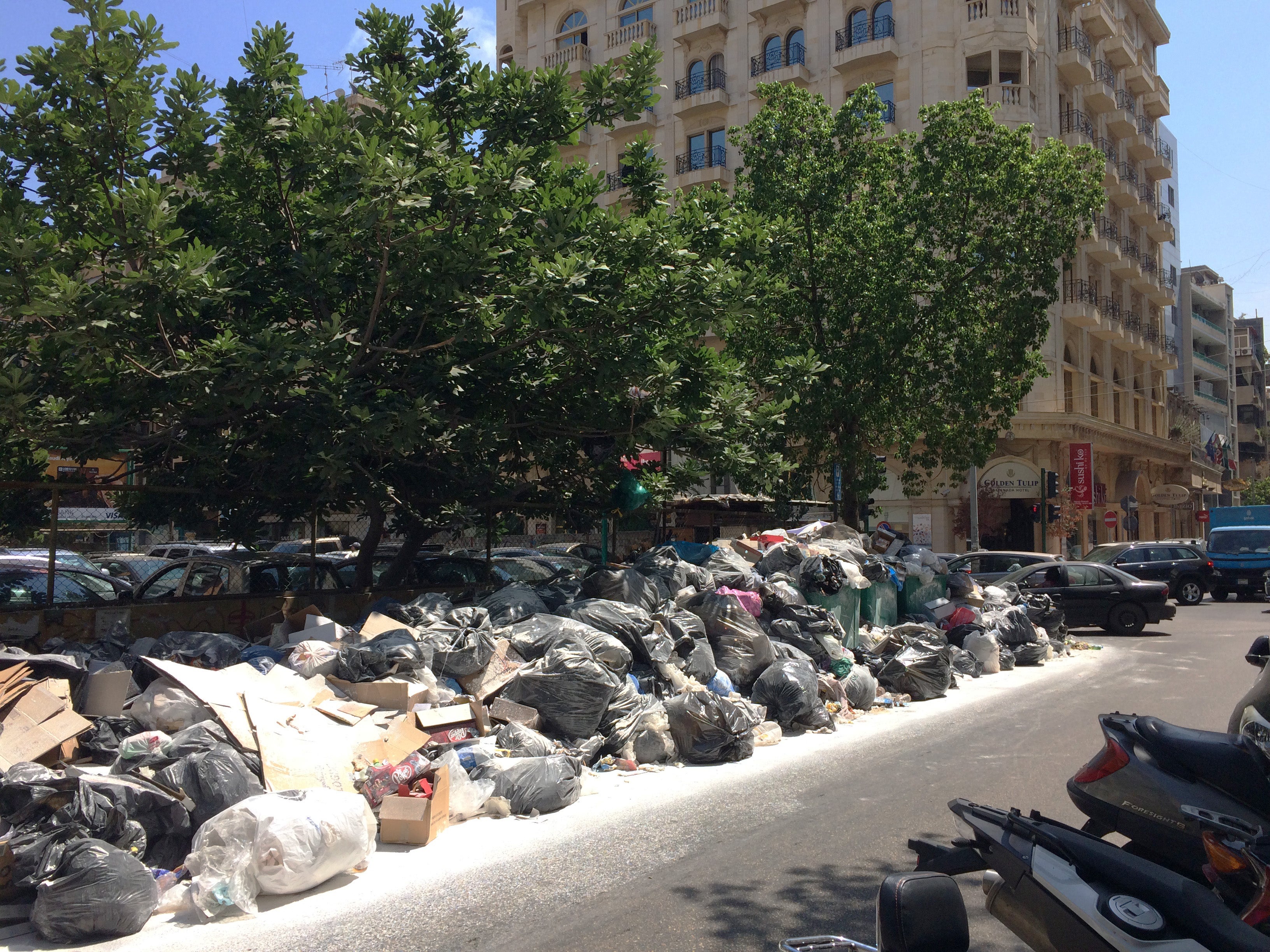 Things got a tad bit more complicated: with police brutally responding and attacking the mostly peaceful protesters, and even arresting minors in several cases, the movement quickly turned into one that wanted to restore the rule of law, and demanded accountability for the corrupt politicians and individuals in the Lebanese police and security apparatus. While Environment Minister Mohammad Machnouk refused to step down from his position, he stepped down from heading the waste management committee and was replaced by current Labor Minister and former Environment Minister, Akram Shehayeb. The new waste management plan involves a management transition from Sukleen to municipalities; however, it involves temporarily reopening the Naameh landfill, as well as the permanent reopening of several others, notably in the Beirut neighborhood of Burj Hammoud and in the Akkar district of Northern Lebanon, arguably one of the poorest areas in Lebanon. Its residents have both protested heavily against opening landfills there, and the You Stink movement has supported them as well.

On September 29, an alternative waste management plan was presented. The proposal was co-written by members of environmental NGOs, unions, and other members of civil society. In short, the proposal calls to not open or reopen any landfills, as well as to not extend Sukleen’s contract. One of the plan’s two proposed waste treatment methods is to vacuum seal the waste for a six-month period before it can be separated and recycled by what is called the “wrapped membrane method.” The other option would be to treat the waste by exposing it to sunlight and wind for a similar period before separating the recyclables from the organic waste. Enzymes would be sprayed to prevent any infestation of the waste. Naturally, there are many questions about the proposal, including where the waste would be safely stored, and whether either method is truly safe of preventing any health problems- the hope is that those who co-wrote the proposal will answer these questions as soon as possible.

At this point, everyone thinks that Lebanon could use a reboot. Being a semi-democracy where citizens elect a parliament, and the parliament elects a president and prime minister, it seems that the most viable solution is to have parliamentary election and a new set of 128 MPs of fresh faces who could solve Lebanon’s most pressing issues. No progress has been made thus far, and with Lebanon experiencing its first rain shower since last winter, concerns have been voiced about a possible cholera outbreak.

Ella Minty, Head of Corporate Communications, averda, the company behind Sukleen, emailed Entrepreneur Middle East to respond to some of the assertions made in the above article. An edited version of her comments is listed below: