How ONergy is giving power to rural parts of east India

Did you know that a person living in the Sundarbans in West Bengal needs to pay Rs five to get his phone battery charged? Or that the power supply almost always goes off when it is needed the most – at night? “The poorest spend the most on a utility such as power in these remote rural areas,” says 32-year-old Vinay Jaju, co-founder and COO, ONergy.

Along with his younger brother Piyush and company CEO, Vinay wants to change this. Through ONergy, the duo wants to provide reliable and affordable clean energy products for solar lighting, cooking and electrification.

Founded in 2009, the social enterprise company builds an ecosystem that connects technology, finance and grassroots organizations to manage the needs, aspirations and resources of below-poverty-line/ undeserved beneficiaries. The company clocked a turnover of Rs eight crore last financial year. 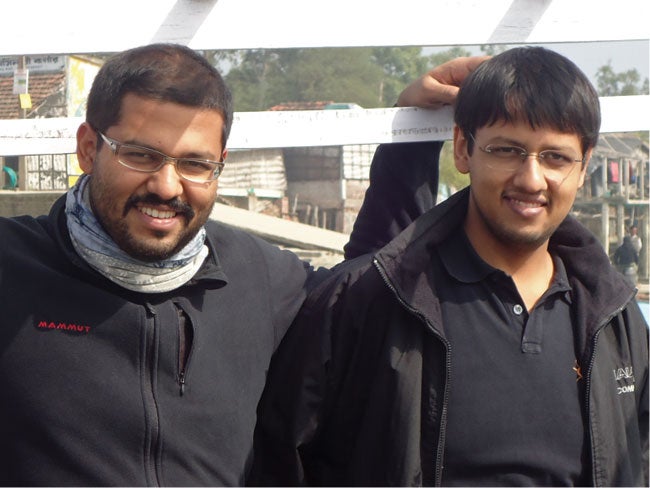 Since its inception, ONergy has installed solar solutions in more than 50,000 homes and institutions, directly impacting 250,000 lives in the states of West Bengal, Jharkhand, Odisha, Bihar and Assam. Its investors include SIDA Sweden, Halloran USA, Rianta Capital UK, CIIE (IIM, Ahmadabad). Growing at a pace of 100 per cent every year, ONergy has an employee base of about 90 people.

The entire movement, however, was a natural progression from a feeling of unease at how our over-dependence on fossil fuels is causing irreversible harm to the environment.

“That, and the faith in alternate energy sources,” says 30-year old Piyush Jaju. In early-2009, Vinay bicycled from Delhi to Kolkata on a bicycle to spread the word about it. The two brothers also formed an NGO called SwitchON for renewable energy advocacy and talked about community-based policy and engagement with the same.

“Gradually, we started to connect the dots and got where we are,” says Piyush, with a smile. The first step: They invested Rs 5 lakh from their personal savings in buying some solar lights, hired a couple of technicians and sold these lights in a village in Sundarbans.

“We didn’t come from a technical viewpoint at all. We were only looking at addressing the access to this technology,” says Vinay. But merely giving the villagers the access to technology backfired. “There was a circuit problem with these lights and within a few months there was a flood of complaints and we realised we have to address this area, too,” says Piyush.

Today, ONergy is known not only for its products but also technical assistance, service, and financial assistance through FIs. More than a year ago, the company also started assembling its own products at its manufacturing facility n Howrah.

While the solar panels can last upto 25 years, the rest of the components in a system can last upto five years. “Plus, they are replaceable,” reminds Piyush.

“It’s a far cry from our initial morose idea of distributing solar lanterns. But the people wanted more. They wanted a fan, a circuit, a switch they could press and the lights would come on,” reveals Piyush.

Vinay reveals how an impact assessment survey revealed the incidents of snakebites had reduced since people started using solar power solutions. “Things like this give us immense satisfaction and moral support for the journey ahead,” he adds. Another thing: people don’t have to pay for charging their mobile phone batteries, either. Mobile charging is available with ONergy kits.

How to Transition to Clean Energy While Potentially Saving Some Cash, Too

How the Clean Energy Fuels Alternatives Are Affecting the Diesel Market

Use of Renewable Energy in Agriculture can be Cost-effective, Says This Expert

Gates, Bezos and Others Invest $1 Billion in Clean Energy

This Is Why You should Become Green Energy Entrepreneurs