Bedding With a Masculine Bent? This Founder Wants to Reinvent a Category for Men -- Again.

It was April 2013, and Greg Shugar was thoroughly exhausted.

He’d spent the past 11 years working around the clock -- “people always use the phrase 24/7, but it was probably more like 18/7,” Shugar says -- building The Tie Bar, a startup that sold stylish neckwear for $15 a pop. The culmination of those efforts arrived in the spring, when private equity firm Chicago Growth Partners acquired a majority stake in the company. Shugar and his wife, Gina, who built the business out of their Chicago home, relinquished day-to-day responsibilities and packed up for sunny Florida, where he grew up.

The first order of business was decorating their new home, and Shugar soon found himself strolling through the bedding aisles of major department stores in utter perplexity. “I wasn’t in the mood to buy flowers and botanicals, and I didn’t like pink, and I didn’t like turquoise,” he says. “So that left me with solids -- and I didn’t want solids either.”

Just four months after his exit from The Tie Bar, the business wheels started turning again. And that October, though still wracked with exhaustion, Shugar ultimately succumbed to his entrepreneurial urges, linking up with two co-founders to create Thread Experiment -- a maker of masculine bedding that officially launched last fall. 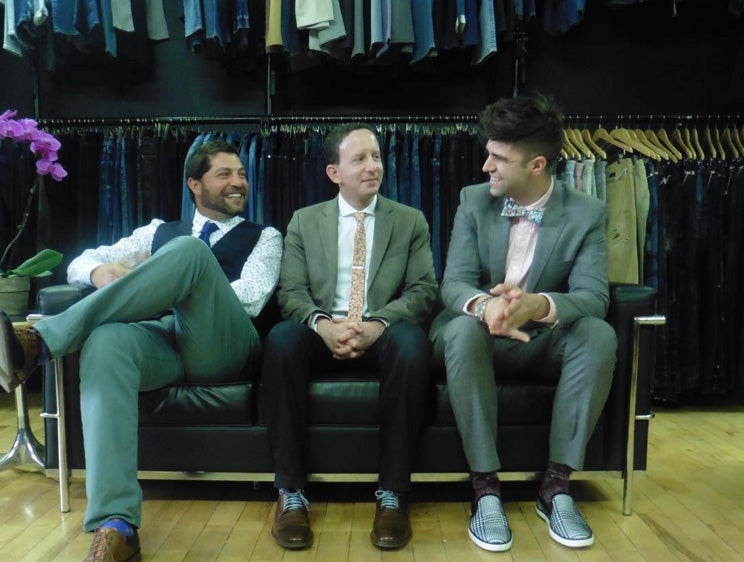 Shugar is not the only entrepreneur to have intuited in recent years that the bedding industry may be ripe for disruption. Pegged at $12 billion in 2015, market research firm IBISWorld describes it as a relatively mature and fragmented industry with no significant brand leaders. The biggest consumer segment is aged 55 to 64.

Related: Mattress Startup Casper Is Bringing Its One-Model-Fits-All Approach to Pillows and Sheets

To this end, a number of ecommerce startups such as Boll & Branch and Parachute have entered the fray to appeal to younger shoppers, with organic and fair-trade-certified fabrics, as well as messaging that aims to debunk widely-accepted misconceptions about thread count. (Consumers mistakenly believe, they say, that a higher thread counts means a higher quality fabric.)

But Thread Experiment, Shugar says, aims to fix a glaring gender imbalance. “Bedding doesn’t purport to be gender based, but knowing that the shopper is typically female, I think the industry creates a more feminine aesthetic,” he says. “And I don’t think men generally care, so if they end up coming home to a pink bed with flowers, they shake it off.”

But today, attitudes are changing. Shugar points to the fact that men are getting married later in life and divorced more often -- as well as the legalization of gay marriage (which could mark a potential boon in wedding-registry purchases) -- as evidence that a need exists but is not being fulfilled. Another kind of customer Shugar envisions is a stylish 20-something who just graduated from college and suddenly realizes his dorm-room décor will no longer cut it. 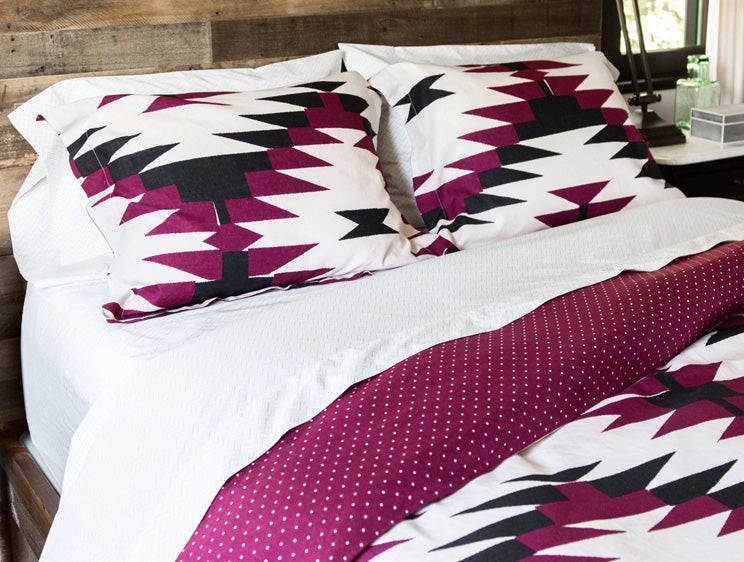 Partners in Thread Experiment include Greg Winner, an old friend of Shugar’s, who heads up financials and operations, and Justin Mikita, who had previously collaborated with Shugar on a charitable bow tie collection for Tie The Knot, an LGBT organization that Mikita co-founded alongside his husband, Modern Family actor Jesse Tyler Ferguson.

“My favorite part of this process has been taking traditional menswear conventions -- buffalo plaids and houndstooth and ginghams -- and converting them into what we’re calling masculine bedding,” says Mikita, who serves as Thread Experiment’s creative director.

Duvets, shams, comforters, sheets and pillowcases, which tout a thread count of 300, are available in 100 percent cotton as well as cotton/linen blends. Prices range from $28 for a pillow sham to $98 for a twin-sized sheet set and $188 for a king-sized duvet cover. The line, which now counts 21 bedspreads and 25 sheet sets, is manufactured in China. 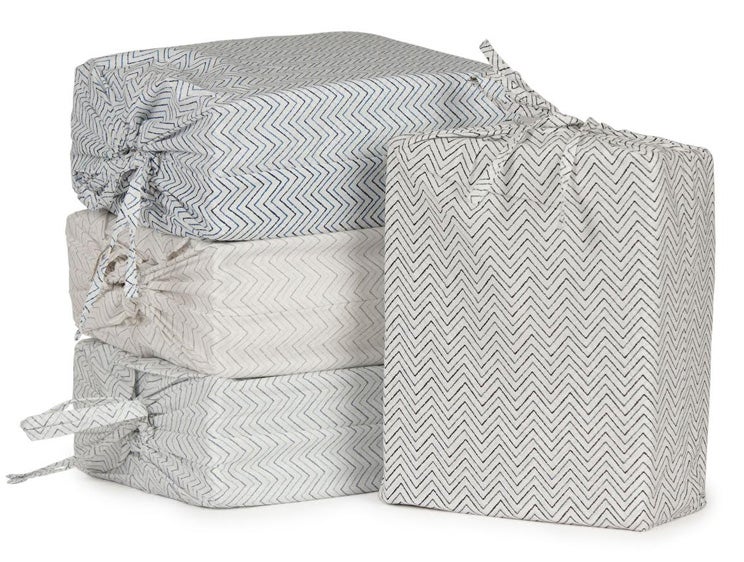 Mikita’s favorite piece, he says, is the Spark duvet, a grey plaid that covers his own bed at home, and which also happens to be the line’s top seller. In his guestroom is a close second favorite: a bold, Southwest-inspired print created by the men’s fashion designer David Hart.

Given his extensive work with the LGBT community, Mikita says he knew he wanted to incorporate a philanthropic angle into Thread Experiment’s mission. For every full set of bedding sold, the company donates a set to a homeless shelter. It has worked with new housing charities every quarter, including the Los Angeles LGBT Center and Camillus House. (Boll & Branch and Parachute, too, each tout a giveback component, donating a portion of sales to the charities Not For Sale and Nothing But Nets, respectively.) 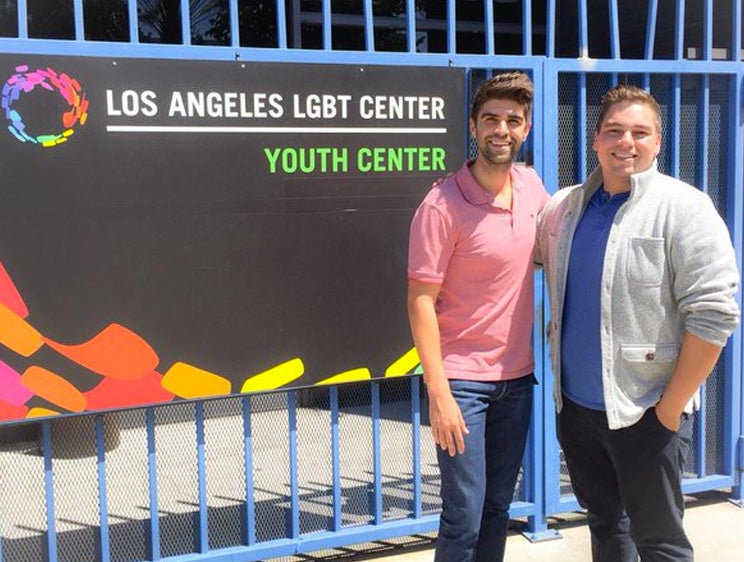 And for Shugar, too, the endeavor is about more than just making money. While a handful of successful founders have gone on to strike lightning twice, Shugar says that Thread Experiment marks, at its core, the continued expression of an incontrovertible passion. “I think that true entrepreneurship is the willingness and desire to succeed, not the desire to make money,” he says. “I have as much fire for it now as I did for The Tie Bar when we were starving.”

That’s not to say it gets any easier the second time around. Shugar, who had no prior professional experience in either of the industries he sought to disrupt, describes the marketing obstacles for Thread Experiment as twofold: convincing men that they should care about bedding, and then convincing them that Thread Experiment should be their premiere shopping destination.

“We’re the first there, but there’s no guarantee that you own it just because you’re first,” Shugar says. “I think that men’s bedding will be a real category within five years -- I just hope we own it.”

Related: The Morning Rituals of 10 of the World's Most Inspirational Entrepreneurs (Infographic)

This Founder Just Launched a Company That's Giving Tea a Much-Needed Makeover for the 21st Century: 'Tea Is for Entrepreneurs. Coffee Is Corporate America's Drink.'