For 100 Years, General Motors Was All About Cars. Now, It's All About People.

Since 1908, General Motors, one of the original big three Detroit auto manufacturers, has been known for one thing: its cars.

It’s somewhat ironic, then, that the company is now aggressively working to build an economy that allows individuals to get around without buying a car.

“People want to talk to us about the big trends in the automotive industry, but I want to talk about the people,” Julia Steyn, the vice president of urban mobility at GM, told Entrepreneur. “We are really not in the car business only. We are in the people business.”

What she means is that GM no longer just makes and sells cars. Instead, its overarching focus is moving them from point A to point B in the most efficient way possible. In January, GM unveiled Maven, a ride-sharing service within GM. Steyn heads up the team, which has formed a close partnership with Lyft (GM has a $500 million investment in the ridesharing service). Earlier this week, the two companies announced a joint, short-term rental program for Lyft drivers called Express Drive: If a driver rents a GM car and completes enough rides on the Lyft platform, then the rental is free.

Maven also launched a peer-to-peer, car-sharing service earlier this year, which is being rolled out in cities across the country. Currently available in New York City and Ann Arbor, Mich., the program allows customers to search for, reserve and unlock nearby GM vehicles via a smartphone app. 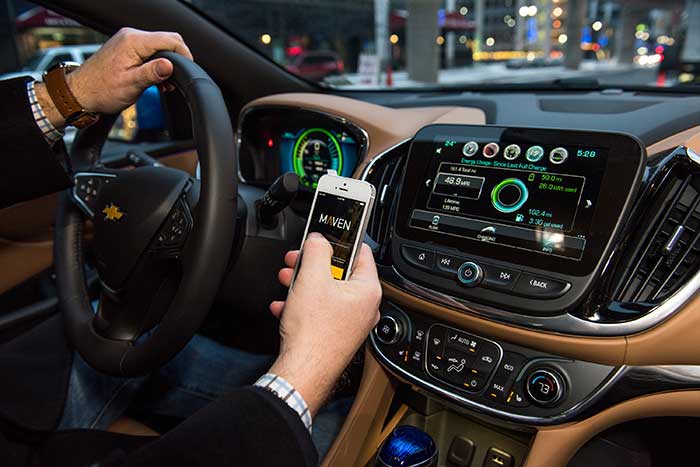 To be sure, there are already on-demand car-rental services, including Zipcar and car2go. But these companies don’t have the manufacturing and engineering infrastructure of a global automaker behind them, says Steyn.

Fundamental to the success of any of the GM’s ride and car-sharing programs is this idea that the company is and can be more than a car manufacturing giant. To do this, it must prove it can keep up with emerging trends in the auto industry, which Steyn predicts will “change more in the next five years than it has in the past 50.”

Is the automaker up to the task? It’s too soon to tell. Reinvention stories require determination and persistence. But Steyn, who immigrated from Russia at 15 and was a concert pianist before getting into the business world, is no stranger to the reinvention process. And she’s fiercely determined to spearhead a transformation in Detroit.

GM to Observe a Production Pause, 8:46 of Silence on Juneteenth