A note to PC vendors: Now would be a good time to bring some innovation to the market, because things are not going great.

According to new data from Canalys, the PC market continued its downward slide in the first quarter of the year as total shipment volumes fell to their lowest point since 2011. Worldwide PC shipments -- including desktops, notebooks, tablets, and 2-in-1 tablets -- totaled 101 million units during the period, a 13 percent year-on-year dip, the research firm said.

Since the data includes tablets, Apple held onto its spot at the top of the market with shipments of more than 14 million units, despite falling 17 percent, Canalys reported. Lenovo was a close second, shipping 25,000 fewer units than Apple, though its decline "moved into double digits on the back of weakening sales in Greater China." HP came in third, followed by Dell and Samsung; check out the chart below. 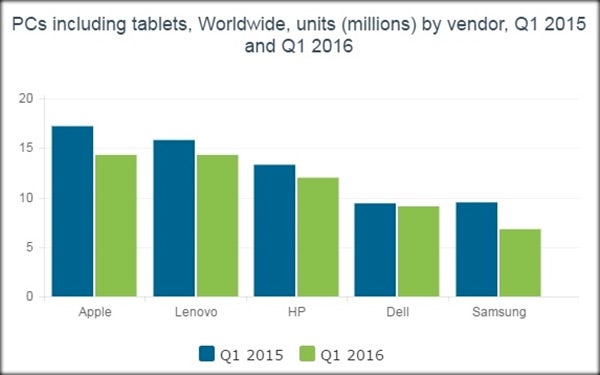 On a positive note, 2-in-1s were a bright spot in the market, growing more than 13 percent. Shipments of all other categories, meanwhile, were "weak." Demand for tablets was especially low, with shipments falling around 15 percent to less than 39 million units.

In a statement, Canalys Senior Analyst Tim Coulling said the number of people looking to buy their first PC "is at an all-time low" and this year is likely to bring more hardship to PC vendors around the world.

"The global PC market had a bad start to 2016 and it is difficult to see any bright spots for vendors in the coming quarters," Coulling said. "The tablet boom has faded in the distance and the market is fully mature."

Unless vendors step up their game and "bring transformational innovation to the market," global shipment declines are expected to continue, he added.

Researchers Can 'Steal Data' By Tracking a PC Monitor's Brightness

Intel to Cut Up to 12,000 Jobs Globally as PC Industry Declines

Have Apple Quicktime on Your PC? Uninstall It Right Now, U.S. Agency Says.