In His Day, P.T. Barnum Was More Popular Than Gates, Musk and Jobs, Combined

'The Greatest Showman,' starring Hugh Jackman, sets the entrepreneur's life to music but sidesteps the controversial side of P.T. Barnum's business dealings.

P.T. Barnum (1810-1891) was the biggest entrepreneur of his day, more popular than Bill Gates, Steve Jobs and Elon Musk, combined. For starters, he vastly expanded the concept of the "circus" -- his three-ring Ringling Bros. and Barnum & Bailey Circus, founded in 1871, folded just this year.

He opened the very successful Barnum's American Museum (1842 to 1865), featuring thousands of exhibits, including the world's first aquarium. He cleaned up and modernized the American theater -- previously avoided by polite society as a "den of evil." He invented beauty contests and baby contests.

Barnum also promoted this country's first rockstar tour (1850 to 1852), featuring "Swedish nightingale" Jenny Lind, who earned an unheard-of $1,000 a night. And, overall, Barnum could take credit for pioneering the big-event business, the reason contemporaries named him the "Shakespeare of Advertising."

What Phineas Taylor Barnum did not do, insofar as we know, was sing and dance. But that is the Phineas we meet in the big-budget, not particularly historically accurate, Hugh Jackman musical, The Greatest Showman, being released today. The movie's original songs, by Benj Pasek and Justin Paul, the composers behind Oscar winner La La Land and Broadway's Tony winner Dear Evan Hansen, are unabashedly contemporary, with uplifting pop lyrics and ebullient choreography, presented in a gorgeously colorful, eye-catching production by an A-list cast (Jackman, Zac Efron, Michelle Williams, Zendaya, Rebecca Ferguson).

Where else could we see a bearded lady (Broadway veteran Keala Settle) belting out an inspiring, foot-tapping number, "This Is Me?" Or an aspiring young Barnum (Jackman) who rose from impoverished beginnings, perched on a rooftop, selling his entrepreneurial vision to his beloved, Charity (Williams), with the melodic "A Million Dreams?"

Dreams are a big part of The Greatest Showman's message, if indeed it has one. "It's not exaggerating to say that Barnum ushered in modern-day America -- and especially that idea that your talent, your imagination and your ability to work hard should be the only things that determine your success," Jackman said, in publicity materials for the film.

"[Barnum] knew how to make something out of nothing, how to turn lemons into lemonade," Jackman continued. "I've always loved that quality. He followed his own path and turned any setback he had into a positive."

In the same context, Barnum himself reportedly said, "No one ever made a difference by being like everyone else" -- a line featured in the film.

But what The Greatest Showman doesn't do more than hint at is Barnum's darker side. He never actually said, "A sucker is born every minute," but his biographer Irving Wallace wrote that he did say, "The American people liked to be humbugged." (The film's Barnum comes close, telling a journalist, "People come to my show for the pleasure of being hoodwinked.")

Clearly, this 19th century entrepreneur was into making money, but not always in a good way, by today's standards: Hoaxes were a big part of his showmanship, an example being his 1842 "Feejee Mermaid," which was no mermaid at all but instead a monkey's head and torso gruesomely sewn onto the tail of a fish. Barnum didn't even create this nasty thing; he leased it.

And he wasn't the first: Such "mermaids" were an art form practiced by Japanese and East Indies fishermen, who stitched dead apes onto fishtails. So, there was nothing real about Barnum's claim and nothing original. Yet he wasn't deterred from promoting his hoax: He hired a fake naturalist to vouch for the "mermaid's" authenticity, then watched, gleefully, as "she" become a major hit for his museum and went on to tour the American South.

Another infamous Barnum hoax involved an elderly female slave named Joice Heth whom Barnum bought -- despite his roots in the free state of Connecticut -- and displayed widely around the Northeast, starting in 1835. Barnum claimed Heth was 161 years old and had been a childhood nurse maid to George Washington. He actually trained her to tell stories about baby George.

And he not only exploited this poor woman during her lifetime but sold tickets to her autopsy, taking place in a saloon in 1836, at which time a doctor declared that Heth was actually a not-so-unusual 80 or so years of age. Barnum wouldn't hear it; he stormed back with features he'd placed in the papers declaring that the body wasn't Heth's at all. But of course it was.

Indeed, this slave woman, the modern-day Dallas News points out, was "one of Barnum's more problematic attractions, most of whom Barnum displayed to capitalize on American fascination with the racial other." Another example of this predilection, The News said, was his exhibit of an impoverished and deformed black man named William Henry Johnson, whose head came to a point, likely due to his being born microencephalic (like today's tragic Zika babies).

Barnum titled the exhibit, not too sensitively, "What Is It?" and stage-named Johnson "Zip the Pinhead" or, alternately, "Monkey Man," for an act in which Johnson was put into a cage and made to screech like an animal -- apparently reflecting, in Barnum's mind, some sort of Darwinian payback.

Of course, there were other "oddities" that Barnum exhibited who did make it into the PG-rated Greatest Showman: the conjoined twins, Chang and Eng; a bearded lady; a dog-faced man; a three-legged man; and people afflicted with gigantism and dwarfism, especially "General Tom Thumb," a 25-inch-tall little person named Charles Sherwood Stratton. 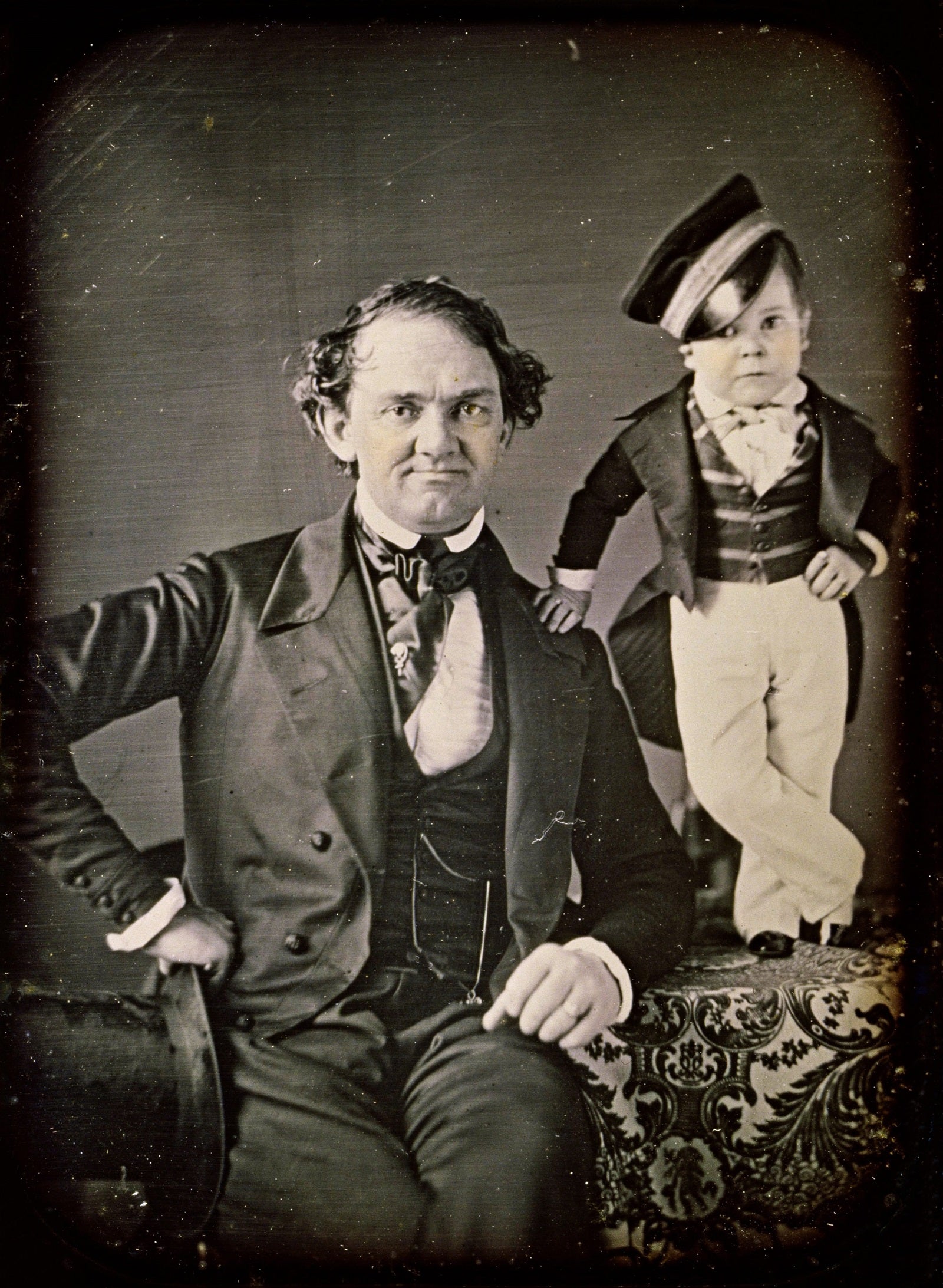 Stratton was only 5 when Barnum found him and trained him to sing and impersonate historical figures, then displayed him to an international audience that included Queen Victoria. His popularity made Stratton a wealthy man -- ironically, he would later bail out the repeatedly bankrupt Barnum. And, beyond that, the exhibitions, thankfully, somewhat dissipated society's tendency to view people like him and Barnum's other "human curiosities" as a "freak show" exhibit.

Interestingly, in a scene that could have come straight out of Oprah, The Greatest Showman turns this troublesome "freak show" aspect into an anthem for self-acceptance and an admonition against bullying. There's even a positive black character in the film -- a trapeze artist (Zendaya), in love with Barnum's (fictional) white partner (Efron), though in the mid-1800s, the story acknowledges, theirs was a romance that could never fly.

The point is, Barnum was not a monster. He was an entrepreneur, a lecturer, a legislator and a fervent abolitionist. And he promoted and paid good wages to the people with physical anomalies that he displayed, bringing these poor souls out of the shadows, and out of dire poverty.

We may all hope that this segment of entrepreneurship is dead -- it's not; "freak shows" still exist -- but the depiction of P.T. Barnum that The Greatest Showman presents offers families seeing the film not just uplifting song and dance but a topic for meaningful dinnertime discussion.