Number one: Focus on the essence, not the specifics!
Next Article

1. Ignore the specifics. Go for the essence.

Here’s why I love Barbara Corcoran, who’s on the cover of Entrepreneur's new issue: She doesn’t care if people take her advice. Go ahead -- ignore it! Discard it! It might be terrible advice! But do at least take inspiration from the spirit of her advice. In our story, for example, she gives two entrepreneurs some colorful ideas for promoting their product. But what she really wants them to do is think creatively about promotion. Does it have to be her specific idea? No, so long as what they do is also colorful.

This, I believe, is the key to learning. Whether you’re reading Entrepreneur, speaking to peers, or attending conferences, the point will never be to take advice exactly as it’s offered. That’s overwhelming and impractical. Instead, I invite you to think of it this way: Calibrate your mind to smart thinking. Consider the spirit behind great ideas. The essence of them. When you surround yourself with great ideas, you start to become a great idea generator yourself. That’s where real success lies.

It's not enough to have something valuable. You need to first connect with the people who need it. This Washington Post story captures that well, profiling an urban entrepreneur who came to West Virginia, tried to help local businesses, but first had to navigate a lot of cultural distance.

“I had to take some time to muck around in chicken shit,” he says. “I learned humility. If we can drop our sense of ‘we know best,’ that animus that I have been the target of doesn’t need to be there.”

As we enter into a new year, I’ve thought a lot about something a woman asked me at the end of 2017. I was a guest on the Never Settle Show, a live-streaming talk show, and she sat in the front row of the audience and stood up to speak. She’s experienced a lot of setbacks, she said. A lot of obstacles. Her life often feels stagnant. How, she wondered, can she move forward?

And I told her this: Nobody sees your past except you.

I expanded upon my answer in my editor's note this issue, and I've never gotten more "thank you" emails from readers in response. Truly, nothing else I've written has prompted this scale of reaction. It tells me how important this message is—and if you're in need of it, I hope you'll read the column and take it to heart.

4. Be the fresh eyes that open everyone else's.

Did you catch this recent news? A 19-year-old college student cracked a code that professional scholars have been dumbstruck by for decades. The quick of it, from this Boston Globe story: The Incas, who inhabited the west coast of South America from 1400 to 1532, didn't invent a written language but instead devised a way to record information on knotted strings. Many strings survive, but anthropologists have struggled to decipher them. Then college kid Manny Medrano comes along, spends his spring break studying the strings, compares them to a census of Spaniards living in an area of Incan territory, and boom: He had something. (Check that story for the rest of the details.)

This should be a reminder to us all: Fresh eyes are sometimes better than wizened eyes. Sometimes the "experts" are too deep inside a subject. Sometimes it takes an outsider to step in, look at something with no preconceived notions or this-is-how-it's-always-been-done mental blocks, and say: Hey, what about trying this? Remember that next time you're entering a new arena. Next time you're the outsider. You may feel intimidated because you don't know what the experts know, but the truth is, you know something they don't. You know how to see things fresh.

5. If only the strong survive, are you the strong? 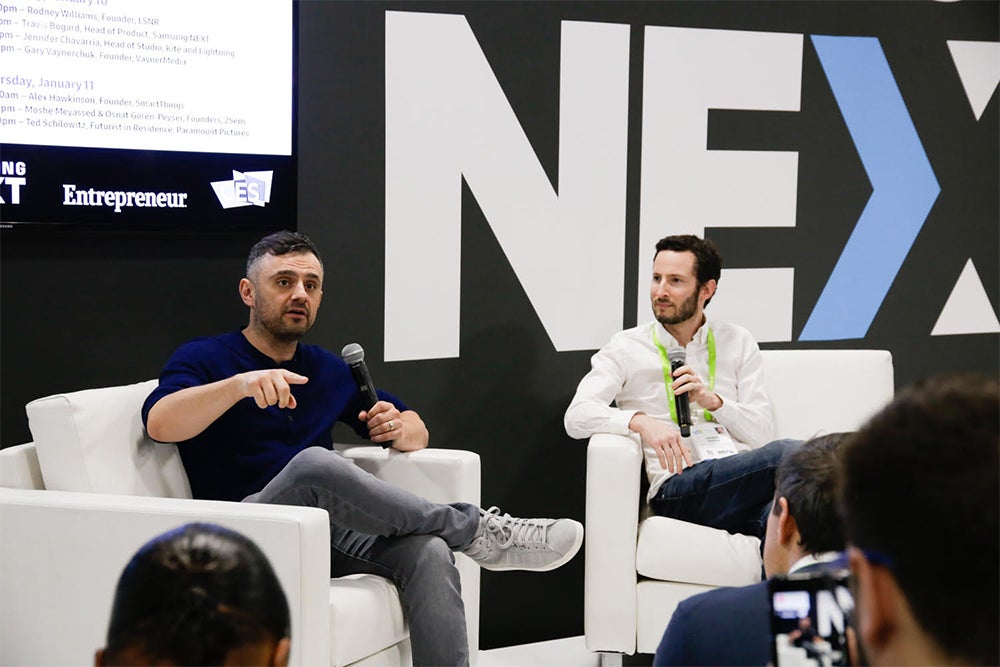 Image credit: SamsungNEXT
I had a fascinating conversation with Gary Vaynerchuk on SamsungNEXT's stage at CES this month. We covered a lot of ground in 30 minutes (which you can see a bunch of in his #DailyVee recap), but the real hammer came down at the end. We were talking about the huge number of people today who call themselves entrepreneurs, or launch companies without really considering their own products' value. Here's how we concluded:

GARY: That bubble will burst, and then we’ll get to see who’s still around, and then we’ll get to see everyone else who says “entrepreneur” in their Instagram profile right now, when they’re working at Bank of America in 24 months. And so that’s what I’m waiting for. I’m most excited for, and waiting for, and hoping for, complete global economic carnage, so that we can weed out the B and C and D players.

JASON: Well Jesus, if you had stopped talking a minute ago we would have ended on a high note, but instead we ended on that!

GARY: That’s where I think this is so fun. I think that is a high note. It’s the same way I’m looking at what’s happening now. The truth should win. If you’re a piece of shit, you should lose. If you’re not a good entrepreneur, you should have a job. Merit and the truth are always the winners, in the macro. We’re just in a micro right now, and people are confused.

(Now it's me again: Harsh words there from Gary, but hard to dispute. The best ideas win. The goal is to be great at what you're doing—and if you're not, to find something else to be great at.)
More from Entrepreneur