It's the power of a creative partnership.

By Jennifer Miller March 13, 2018
Opinions expressed by Entrepreneur contributors are their own.

When Laura Lane, 32, and Angela Spera, 29, met in a sketch-writing workshop in 2013, they were just looking for a creative escape from their day jobs. Neither expected to build a creative partnership. But once they did, their careers took a totally new turn. Today their comedy podcast, This Is Why You’re Single, has roughly 70,000 monthly listeners and a long list of ad partners. They released a book by the same name that's been praised by everyone from People to the Washington Post, and sold a sitcom pilot to the Pop Network.

In this conversation, they explain how they started with one idea and built it, step by step, into a thriving business.

What were you each doing when you met?

Spera: I was working in marketing for three years, right out of college, but I was bored and unfulfilled. I always wanted to try comedy, but I was too nervous. My therapist said try it or you’ll regret it. So I signed up for a writing class at The People’s Improve Theater.

Lane: I’d worked in magazines at OK!, Life & Style and People, but I didn’t want to be pigeonholed as a celebrity reporter. I got a side gig hosting a comedy show for Major League Soccer on their YouTube page. It was The Soup but about soccer. I signed up for the comedy-writing class thinking it would help me write the scripts. Little did I know that it would magically lead me into this whole other career.

Related: 3 Things Improv Comedy Taught Me About Starting a Business

When you two met in class, you had the idea for a comedy show about dating -- and then hired your own director and actors. How do you even develop something like that?

Lane: I had been living like Kim Cattrall in Sex and the City, hooking up with every type of dude with no plans to settle down. But when I met Angela, I was in my first long-term relationship.

Spera: I was single for the largest chunk of time ever. It was 2013, right around when Tinder became a thing. Laura was the first person to put Tinder on my phone, which turned out to be a good content-creator for us.

Lane: Everybody was confused about dating. They were looking for comedy. We wanted to create our own stuff and weren’t going to wait around for somebody to tell us that we were good actors. We were nobodys. But we didn't want to make some scrappy shit sketch show. In my eyes, it might as well have been a Broadway play. I asked my neighbor, who’s photographed famous people, to take professional promo pictures. We asked people for a lot of favors. And we spent a lot of money. More than Angela was comfortable with.

Lane: I was a little pushy, but I was in investment mode.

Angela: I was like, “I don’t know if we need this many props.”

Spera: My experience seeing comedy shows until that point was a lot of pantomime and everyone wearing black.

Lane: And that’s not what I pictured.

Spera: The money we spent elevated the show. It was completely worth the investment, but in the moment, it was a huge source of anxiety.

How did you balance this with full-time jobs?

Lane: We were working at coffee shops until midnight, working weekends. We were pulling all-nighters and then going to work the next day.

Spera: We’d stay at Argo Tea until they closed. We’d walk in and they’d say, ‘Shit, we’re not going home on time tonight.’

So the show took off -- featured in the New York Times, sold out every night. Then the book came next, right?

Spera: There was a big learning curve. We learned that the publisher wouldn’t pay for a lot. 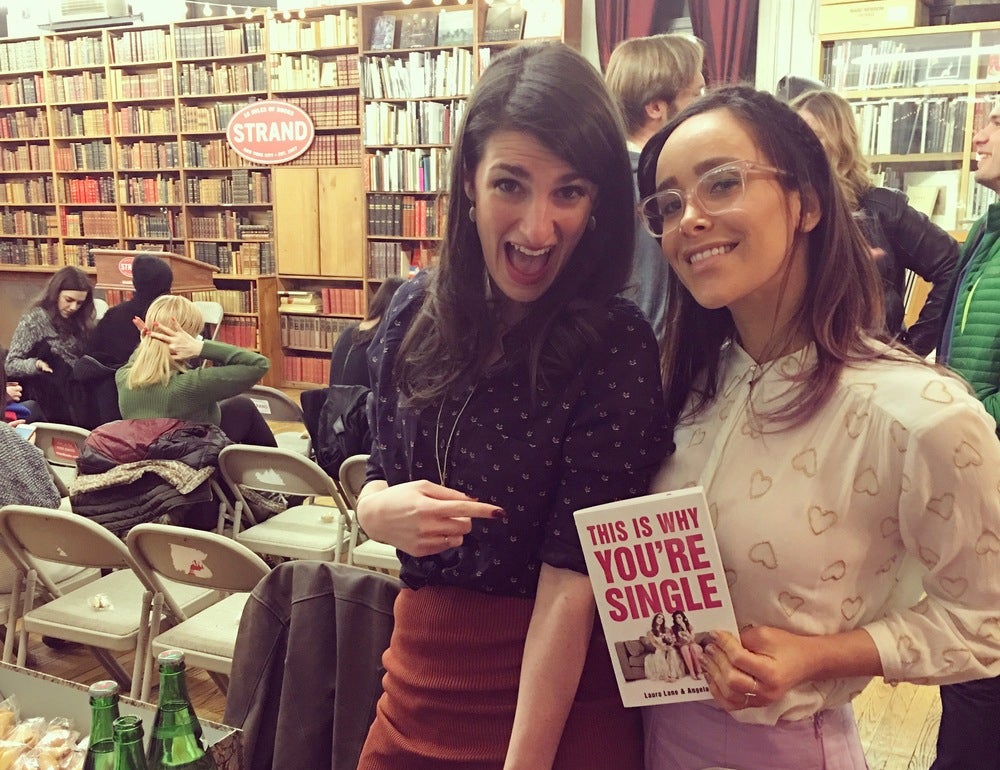 Image credit: This Is Why You’re Single

Lane: Also, they flat out told us “comedy books don’t sell.” They wanted an advice book. We almost lost our book deal because of it. At one point, we drove up to Boston to try and convince our publisher to make it a humor book. In the end, we came to a compromise.

Spera: They’re fables [about dating] and then there's a moral to the fable, and that's the advice.

Lane: And we love that idea now and 100 percent stand by our book.

Lane: If you want to open a restaurant, you have investors who have a certain idea of what customers will eat, and that might be different than what the creative chef wants. From the creative perspective, compromise is really hard, especially when you put your heart and soul into something.

Spera: It’s like birthing a baby and having it taken away. But we learned an important lesson. It’s hard to take edits that you get back the next day. But a week later, it’s like, ‘OK, cut that.’

And the book led to the podcast, right?

Spera: Originally, the podcast was just one of the ideas we came up with to promote the book. We intended it to be a limited run leading up to publication.

Lane: We hired a somebody on Fiverr to make a professional jingle. We came up with segments and games. And we practiced talking alone in a room before we ever recorded anything.

Spera: A lot of people think they can just get together with their friends and record themselves talking. They overestimate how funny they are.

Lane: A lot of people will tell you, ‘Just get out there and do it. It doesn’t matter if the first 10 episodes suck.’ But if I listen to one episode of a podcast and I think it sucks, I'm not going to go back and listen to another episode.

What made you decide to keep the podcast going after the book came out?

Spera: Our audience. They responded to how transparent we were. We talked about ourselves and our relationships and people really responded to that. I think they feel like they know us. And they do know a lot.

Lane: People write in and know Angela’s boyfriend and my husband’s name. People are so open with us in their emails that they inspired us to be more open. Angela talked about getting a colonoscopy. I talked about pelvic floor therapy.

Spera: We retweet followers’ tweets and comment on their comments. As a rule, we write back to anybody that emails us. When the book came out, we raffled off Skype advice sessions with anyone who sent proof of a receipt.

Related: The Growth of Podcasts and Why It Matters (Infographic)

So far, you've been building one thing on top of the other: The show leads to the book, which leads to the podcast. And the next step might have been TV -- but what happened?

Lane: We were taking meetings in Hollywood called “generals.” Basically, get-to-know-you conversations with producers. We showed up at the Amazon meeting, expecting just to shoot the shit like we had at the other studios. And there were these two executives with their arms folded. And they look at us and say, “Pitch.”

Spera: We’re like “ha ha ha.” We didn’t expect to be dancing monkeys.

Lane: We totally bombed the meeting, but we walked out and said, “We will never let that happen again. We will never walk into a room not prepared.” That night, we pulled an all-nighter. If they asked us for a pitch, we were ready.

Spera: It was a good lesson.

Lane: We got further in that process than we ever dreamed. We genuinely have no regrets, which probably sounds bullshit, but it’s true.

And you haven't given up on your TV ambitions?

Lane: We're working on developing a This Is Why You're Single game show with a production company called Above Average. To be clear, it might never end up on TV if it doesn't get sold to a network. It never ends! Haha!

You don't seem so concerned about the uncertainty of a TV deal. Why is that?

Lane: When you have big ambitions, the farther you get ahead, the less control you're going to have. But in those moments, you have to fight for yourself. The book turned out so well because we fought so hard. If we’d just said yes to the publisher, our book wouldn’t have been as funny. And we have the podcast. That's 100 percent in our control.

Spera: Nobody’s going to hold your hand. You’ve got figure it out yourself.

You've built a business out of a creative pursuit. Do you two consider yourselves entrepreneurs, or just creative people?

Spera: Somebody who identifies as an entrepreneur, in my mind, gets a real high off the business end of things. We do it because we have to.

Lane: I have an entrepreneurial spirit in a creative person’s soul: We’ve got a sketch show, now how can we turn this into the book? What else can we plan?

Spera: You need both the business and the creativity to be successful.

Lane: You can be the most creative person with the best script, but if it’s just sitting on your shelf then what’s the point?